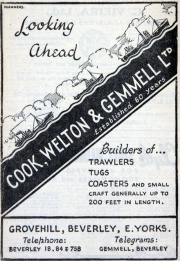 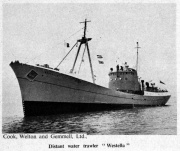 1882 The company was set up on the Humber Bank at Hull by William James Cook, Charles Keen Welton and William Gemmell, three former employees of Earle's Shipbuilding and_Engineering Co who set up their own company in 1882, initially to undertake repairs and then build vessels themselves.

1880s - The first ship to be made by the yard was a steam fishing smack.

1894 Partnership change. '...the Partnership lately subsisting between us the undersigned, William James Cook, Charles Keen Welton, and William Gemmell, carrying on business as Shipbuilders, at the borough of Kingston-upon-Hull, under the style or firm of Cook, Welton, and Gemmell, has been, by mutual consent, as from the 10th day of November, 1894, dissolved, so far as regards the said Charles Keen Welton, who retires from the firm. All debts due to or owing by the said late firm will be received and paid by the said William James Cook and William Gemmell, who will continue the said business on their own account under the present style or firm of Cook, Welton, and Gemmell...'[1]

1901 The company moved to a new yard in Grovehill, Beverley in 1901; they took over the Grovehill shipyard from Cochrane, Hamilton and Cooper which had previously been owned by Cochrane and Sons. The first production of the new yard were trawlers and whalers.

They dredged the River Hull, allowing larger ships to be built.

WWI Tugs, minesweepers and anti-submarine patrol boats were the main ships built for the War effort.

1920s The yard consolidated its reputation for building high quality trawlers and continued to do this during the inter war years.

1950s After the war, the yard focussed on trawlers again along with a few tugs.

1954 The Grovehill shipyard continued to be busy. It was reported that 15 vessels were launched in 1954, five more than in the previous year. They included three minesweepers, four trawlers, and a tug: they were typical of the orders being received by the yard at that time. At least three of the trawlers launched in 1954 and 1955 were exported to South Africa.

1954 For many years, the chairman of Cook, Welton and Gemmell was Harold Sheardown, a Hull businessman who was also vice-chairman of the Kingston Steam Trawler Co., which was one of the best customers of the Beverley shipyard. He dies in 1954.

1963 The yard struggled to find orders and was closed under the Cook, Welton and Gemmell name on 31st March 1963.

Soon after the yard was purchased by Charles D. Holmes and Co. The company name was changed to Beverley Shipbuilding and Engineering Co Ltd. This was in turn taken over by Whitby Shipyard Ltd on 1 July 1976[2].