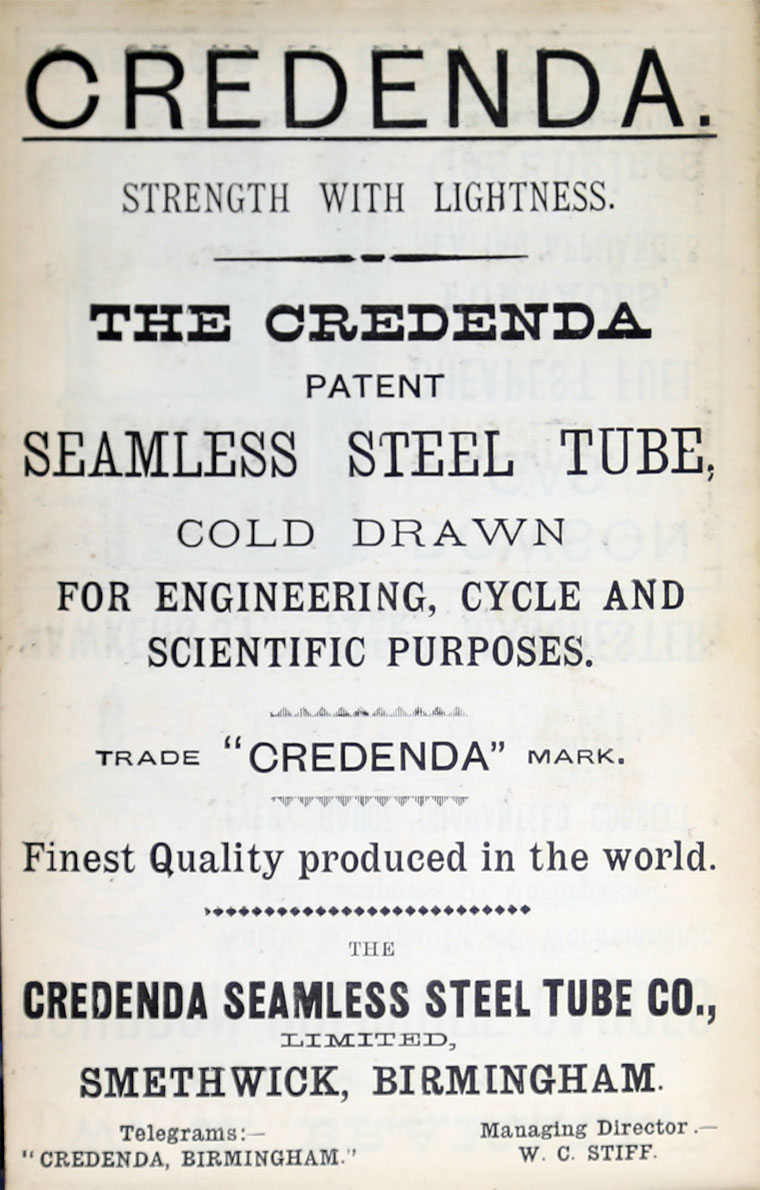 1888 Company converted to limited liability. The Birmingham works of the Company were being extended. The company had been originated by Sir Joseph Whitworth and Co of Manchester where the other works were located [3]

1889 the newly formed Credenda Seamless Tube Co bought the Bridge Street factory of the former Birmingham Plate Glass Co and converted it into a tube mill, the Credenda Works.

1893 Resolution to wind the company up. '...1. "That the Credenda Seamless Steel Tube Company Limited be wound up voluntarily under the provisions of the Companies Acts, 1862 to 1890; and that William Charles Stiff, of 178, Hagley-road, in the city of Birmingham, Engineer, be and he is hereby appointed Liquidator for the purpose of such winding up.
2. "That the Liquidator be and he is hereby authorized to carry the Agreement, dated the 23rd day of February, 1893, expressed to be, made between the Credenda Seamless Steel Tube Company Limited of the first part, the Credenda Tube Company Limited of the second part, and the several persons mentioned in the second-schedule thereto, viz.:— Manassah Gledhill, Herbert Hanbury Smith-Carington, Richard Copley Christie, Richard Smith-Carington, William Robert Lake, and William Charles Stiff of the third part, into effect, and in particular to receive in part compensation for the transfer of the Company's undertaking thereby agreed to be made, the fully-paid ordinary, and preference shares and the deferred debentures mentioned in the Paid Agreement for the purpose of distribution among the Members of this Company. Dated this 24th day of March, 1893. H. H. SMITH-CARINGTON, Chairman.'[5]

1896 The Credenda business was bought by a Birmingham firm, the Star Tube Co