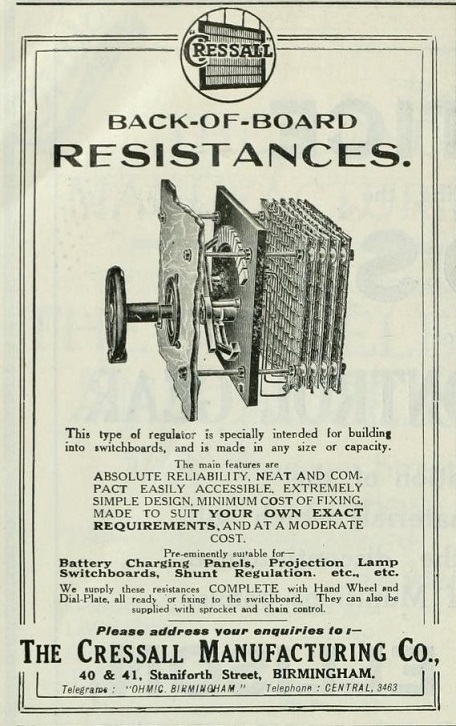 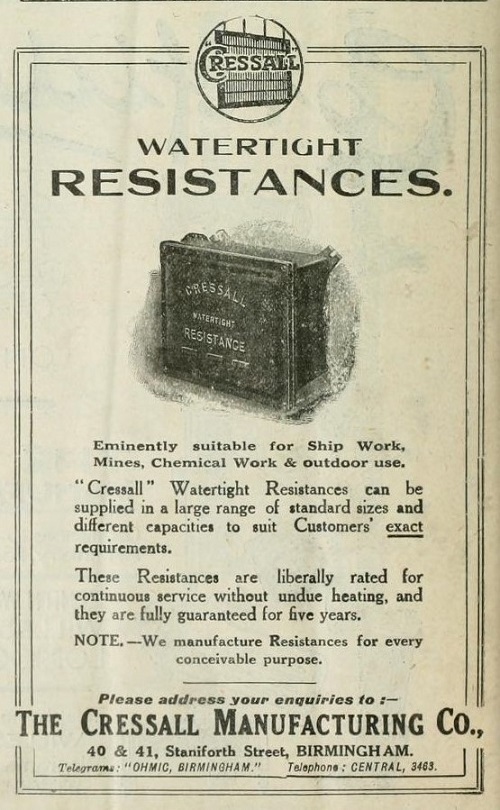 1912 Mr. H. H. Cressall and his brother founded the Cressall Manufacturing Co Ltd to produce woven asbestos resistance nets which were being manufactured in Germany but not in the UK.

By 1939 The company had 70 employees working in a three storey building in Tower Street, including a metal fabrication department. Its range of products included wound porcelain and mica elements as well as the original nets, which were used for motor speed control, battery chargers, heating and other applications.

WWII the Company was a "reserved" establishment; it made welding resistors for dockyards, degaussing resistors for use on-board ship to combat mines, nets for radio communications and heaters for bomb and camera mechanisms on aircraft. At one point morale was raised by a visit from a naval officer who explained that the defence of Gibraltar was entirely dependent upon a piece of resistance wire that Cressall had supplied. Growth was maintained by introduction of Torostats (wire-wound rotary variable rheostats) and vitreous enamel resistors

1955 Cressall was taken over by The Expanded Metal Co (Expamet). The 2 product ranges complemented each other - Cressall could manufacture resistors up to a rating of 100 Amps; Expamet had a resistor and heater section that could deal with requirements from 50 Amps upwards to any current. From its base in West Hartlepool, the new company, which retained the Cressall name, had a wider range of resistors, heaters, etc. than any other in the UK.

1957 Mr. Cressall died; the company introduced a variable toroidal transformer (the Torovolt) in competition with Claude Lyons and Berco. Also this year, Birmingham Corporation gave the company 5 years notice to quit their premises.

1960 The company, with more than 100 employees, moved to new premises in Cheston Road in Birmingham.

1965 Establishment of a division selling low voltage, road heating systems and magnetic screening for hospitals and laboratories; diversified into printed circuits and electronic devices. Name changed to Cressall Printed Circuits. This diversification did not prove to be a long-term success.

1990 Acquired by the Halma Group; turnover had collapsed to less than £0.5million, with less than 15 employees; the product range had slimmed down to just expanded mesh, edge-wound coils and steel jacketed heaters.

1990s Other UK resistor businesses and products were acquired, from GEC Rugby, H. A. Birch and US company Eaton Cutler-Hammer, which extended Cressall's range of resistor technologies, especially power resistors.

By 2000 the company employed more than 100 people and had a turnover of more than £6million.

2006 Halma sold all of its resistor businesses to Telema SpA.