Looking west from eastern buttress. The western buttress is in the trees, close to the top of the hill, in the centre of the photo. Another part of the viaduct continued over the next, smaller valley 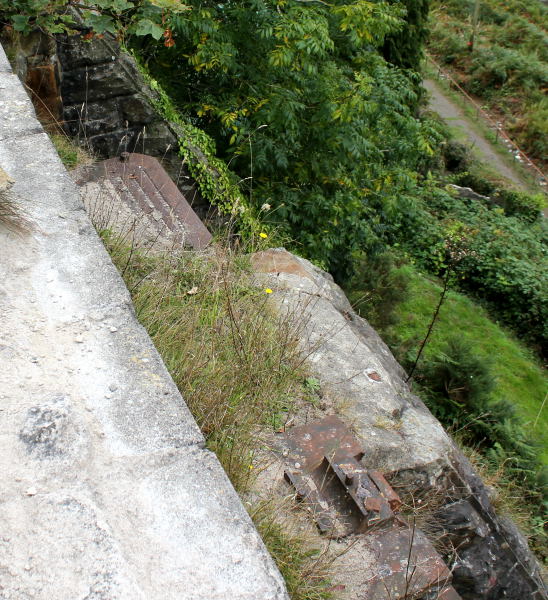 1852 the Board of the Newport, Abergavenny and Hereford Railway invited tenders for the construction of a wrought iron bridge as part of the Taff Vale Extension which would connect with the Taff Vale Railway.

Charles Liddell, the railway's chief engineer, preferred Thomas Kennard's submission. Kennard’s plan incorporated his own-patented modification of the Warren Truss. The iron castings for the Viaduct were made by the Falkirk Iron Co; most of the wrought iron work was made by the Blaenavon Iron and Coal Co, both Kennard companies.

An assembly plant was built at Crumlin called the Crumlin Viaduct Works where the various sections of ironwork were put together.

The Crumlin Viaduct was finished in 1855; it consisted of ten, 150 feet long Warren Truss Spans 200 feet above the valley floor.

1857 The Viaduct was formally opened.

1858 In an address to the Institute of Engineers in Scotland Professor W. J. Maquern referred to the truss form "invented by Captain Warren used on the Crumlin Viaduct constructed by Messrs Liddell and Gordon as engineers and Mr Kennard as contractor". The bridge was the first product of the Crumlin Viaduct Works.

By the mid-1860s it was apparent that the viaduct was suffering from vibration, and some deterioration was apparent, necessitating repairs and strengthening. Holes for pins in the Warren girders were elongated by wear; tie-bars between the cast iron legs were rusting; timber decking was decayed. Considerable strengthening was recommended by Captain Tyler and separately by John Fowler. The work was undertaken by Messrs Kennard, and completed in late 1866.[1]

This was the tallest viaduct in Great Britain until its demolition in 1965.

This viaduct, with its tall piers assembled from cast iron tubes, influenced Gustave Eiffel in his design of his railway viaduct over the Garonne at Bordeaux, started in 1858[2]