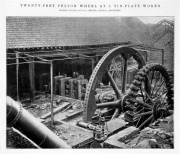 Note: This entry covers the works in Cwmavon which produced copper, iron, tinplate, coal, firebricks, chemicals and related products. Some or all may at some point have been owned by the same company.

The 1897/1899 OS map here shows three main factories in Cwmavon: the Rio Tinto Copper Works; a steelworks; a tinplate works. The map has the words 'Cwm Avon Works' which may relate to the steelworks and the tinplate works. Rows of small houses appear to have been enveloped by the steel and copper works. The copper works was said to be the largest in the UK[1]. It was owned by the Rio Tinto Co since c.1884. The workforce was reduced in 1902 when the calcining process was undertaken in Spain rather than at Cwmavon.[2]. The first sod was cut for the steelworks by Mr Danks, general manager, in July 1887 [3].

1831 Bar mills and tinplate mills were erected at Cwm Avon; blackplate was produced[4]

By 1846 Mr. T. R. Guppy was manager of the Cwm Avon Works of the Governor and Company of Copper Miners in England.

1862 'CWMAVON. ENORMOUS IRON RAIL.— The process of rolling a great bridge (flange) iron rail, intended for the Great Exhibition, of the extraordinary length of upwards of 90 feet, and the unprecendented weight of 58lbs. per yard, was most successfully achieved on Saturday last, at the rail mill of the Cwmavon works. For several days much excitement, and some anxiety, was manifested as to the ultimate result of the attempt, for failure after failure attested the difficulties that were unavoidable encountered in rolling the enormous mass of metal; but under the skilful superintendence of Mr. David Lewis, the perseverance of all engaged was rewarded by the production of, perhaps, the largest, heaviest, and most splendid flange rail ever manufactured. Each time the glowing mass was forced into the rolls, and, being rapidly drawn through the several grooves, increased in its destined length — at each successive roll, the enthusiasm of the spectators and workmen increased also, the excitement during the last and finishing roll being extraordinary; the most unbounded delight was manifested by both workmen and spectators who crowded the mill on the occasion, at the complete success of the arduous undertaking. In addition to the "monster" rail, a model flange rail, 63 feet long, and 3 3/4 lb. per yard, and two others, a copper and yellow metal rail, have also been rolled for the Exhibition, and are beautiful specimens of manufactured metal, reflecting much credit on all engaged in their production. A liberal subscription was made on the spot for the workmen, and a further handsome contribution from the directors of the company, who had been inspecting the Cwmavon works, has since been added.' [6].

1865 Cwm Avon and Oakwood had 6 blast furnace, one out of service

1877 Mr. James Shaw and some associates acquired the extensive establishment of the Governor and Company of Copper Miners in England, better known as the Cwm Avon Ironworks. "This famous company was incorporated by Royal Charter in 1691, and went into liquidation in July, 1876, having succumbed to the storm which wrecked so many other concerns engaged in the iron-trade. It is well known that their great works had cost this ancient Corporation over a million and a quarter of money. Mr. Shaw worked this property for some years with remarkable success, and at a later date, formed the property into a limited liability company, which has since gone into liquidation."[7]

1877 Shortly after this the tinplate works were sold, recovering almost all of the money that Mr Shaw had spent in acquiring the company[8]

1886 'A BLAST FURNACE STARTED AT CWMAVON. The Cwmavon Works proprietors, who, since taking possession of the estate and works of the Governor and Company of Copper Miners, have entered with such spirit and enterprise into the resuscitation of the various industries of the Afan Valley, and expended a large amount in the reconstruction and remodelling of the various works and undertakings forming their property, have this week started the first of the blast furnaces forming the new plant. It is to be hoped that the company, by the further development of its various industries and the opening up of its valuable mineral property, will soon revive the reputation it formerly possessed.' [10]

1888 'FIRE BRICK WORKS — FOR SALE by PRIVATE TREATY, all those FIRE and other BRICK-WORKS at CWMAVON, in the County of Glamorgan, known as the Cwmavon Brickworks, near Port Talbot, and in direct communication with the Rhondda and Swansea Bay and Great Western Railways. These works, which have recently been remodelled and extended and fitted with the most approved appliances, and are in full operation, are situate in the centre of the Cwmavon Works Estate, and are con- tiguous to the Copper Works of the Rio Tinto Company, the Tin plate Works of the Copper Miners' Tin-plate Company, and the Collieries, Blast Furnaces, and Steel Works of the Cwmavon Works' Proprietors, and the bulk of the make is taken by these works. The supply of the best fire and other clays is practically unlimited, and the works, which can, if necessary, be extended, are now capable of turning out upwards of three millions of bricks per annum. For particulars and to view, apply to Messrs Tennant and Jones, Solicitors, Aberavon.'[11]

1890 'CWMAVON. FUNERAL OF MR JOHN STANLEY, J.P.
At Cwmavon Cemetery on Saturday, the funeral took place of the late and deeply-lamented Mr John Stanley. The deceased gentleman, who was 46 years of age, had been for 13 years the manager of the Cwmavon Tinplate Works, and he had in this capacity won the esteem not only of those in the employ, but of the whole of the inhabitants of the district. Previous to his connection with Cwmavon Works, Mr Stanley had occupied the position of engineer under Messrs Leach, Flower and Co., at Briton Ferry. He took a deep and active interest in every good work in the Avon Valley. Mr Stanley married the daughter of Mr J. Edward Armstrong, of Hereford. The funeral on Saturday was largely attended, there being from 300 to 400 of the workmen present. The service was conducted by the vicar (the Rev J. Griffiths) and his curate. Among those who were present to pay a last tribute of respect to their friend were Mr Frank Bullock, Mr Byass, junr. Mr Phillips (Leach, Flower, and Company), Mr Marmaduke Tennant, Mr H. S. Arnold, Mr A. H Bartlett, Major Jones (Aberavon), Mr Robert Leyshon.'[12]

1893 'CWMAVON. Good NEWS.— It has been decided upon by the proprietors of the Cwmavon Works (Messrs Wright, Butler and Co.) to restart the blast-furnaces and steelworks, as well as to lay down a new Bessemer plant for the manufacture of that class of bars in addition to the Siemen's, as at present. This will necessitate the re-starting of the coke ovens, washing machines, and collieries. It is estimated that arrangements can be made for work to be resumed by the New Year.' [13]

1903 Two 20 ft diameter Pelton wheels were supplied by Gilbert Gilkes and Co for the tinplate works (then owned by Copper Miners' Tinplate Co. The available head was about 100 ft. Supply pipework 39" dia., supplied by T. Piggott and Co. 50 ton flywheel made by Price Engineering Co of Neath.[14]. See photo.

1908 'ONCE A COLD-ROLL BOY. CWMAVON WORKS NEW MANAGER. Mr. William Price Lewis, who has been appointed manager of Copper Miners Tinplate Works, Cwmavon, Port Talbot, is at present in charge of a large tinplate works in Zanesville, Ohio.
His connection with the tinplate trade began when he became a cold-roll boy at the Lydney Works. Subsequently he was appointed mill foreman at the Melingriffith Works, and at the same time he was connected with the works at Aberdare.
A few years later Mr. Lewis threw up these position in order to take charge of a tinplate plant near Bilboa. After six years there he went to Cincinnatti, U.S.A., where he was soon promoted to the managership of a larger works at Zanesville.' [15]

Little remains today to indicate the presence of the important metal-producing industries. The large chimney, the Stac-y-Foel, which once discharged the toxic fumes from the copper works (see 1846 article) was demolished in 1940 to prevent its use by German bombers for navigation. The remains of the 'Cwmafan copper works flue' are a scheduled ancient monument[16]. A few place names serve as a reminder of the industries, such as the Rolling Mill Inn.