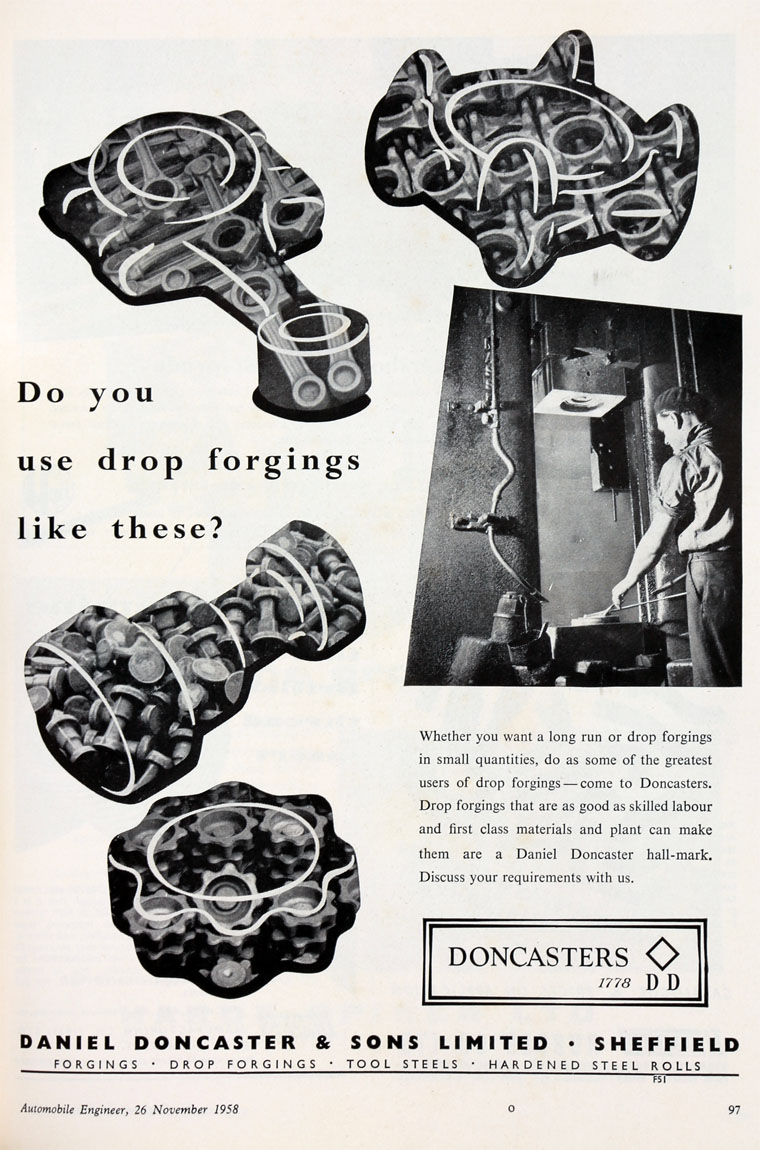 1778 Company founded to apply the crucible steel-making process to the manufacture of hand tools. Daniel Doncaster, at age of 21, had obtained his trade mark, making it one of the world’s oldest.[1] Initially traded as file makers.

The company imported iron and Bessemer steel from Sweden.

1902 Incorporated as a limited company.

Expanded into the forging and drop forging trades in addition to manipulating special tool steels.

1951 Acquired a factory in Leeds to make gas turbine blade forgings (Monk Bridge Works); much of the machinery was leased from the government[5]

1953 Public company. Shares were made available to the public. The company had invested further in the factory in Leeds.

1997 Doncasters, components manufacturer, acquired Triplex Lloyd, and was considering whether the acquired automotive division was non-core[10]

1999 Acquired a large-parts precision casting facility based in Groton, Connecticut, from Wyman-Gordon Co. which became Doncasters Precision Castings-New England. By this time Doncasters was one of the world's largest producers of gas turbine airfoils with casting operations in Europe and finish machining operations in New England, Georgia and the U.K. The acquired facility had unused capacity that would be used to increase Doncasters' production of cast airfoils that would then be supplied to Doncasters' nearby operations in Connecticut for finish machining. [11]

2001 Merger with Ross Catherall. Doncasters was acquired by the private equity arm of Royal Bank of Scotland and delisted.

"On Wednesday evening a terrible accident occurred at the works of Messrs. Daniel Doncaster and Sons, steel converters, in Sheffield.

Their premises are situated in a densely populated part of the town and are skirted on the right by Matthew Street. On this was the warehouse where there was stored steel and iron bars roughly estimated at from 600 to 1,000 tons; the greater portion of this pile was stored against the wall which, in addition, supported the roofs.

About 5 O'clock the wall suddenly gave way and fell into the street, carrying with it the immense mass of steel with the timbers of the roofs and slates. There was a report as of thunder but for several minutes nothing could be seen for the dense cloud of dust which rose high into the air.

The people living at the opposite side of the street came to their doors in alarm and had their attention immediately attracted by the screams of two children who who had been seated close to their doorsteps and who were nearly covered by debris. The children were liberated and found to be little injured.

In the road lay the steel piled up to a height of about 10 feet, and as several children had been seen a few minutes before playing under the warehouse wall the worst fears were entertained as to their fate. The workmen of Messrs. Doncaster, of Messrs. Southern and Richardson and neighbouring firms, at once commenced to remove the steel but when it is stated that some of the bars were as much as three or four man could lift the nature of the task before them may be imagined.

The chief constable with a strong force of police arrived, and their services found to be very valuable in keeping back the crowd, for news of the disaster had quickly spread, and not only Matthew Street but all adjacent streets were blocked by the excited people. After some tons of metal had been removed it was decide to open passages into the mass, the more readily to ascertain whether any bodies were buried or not for the parents of five children had already reported the missing, and they were frantic with grief with the possibility of their having been crushed.

The men worked with energy, and by seven o'clock one opening in the metal had been made and underneath were found the remains of three children, mangled almost beyond recognition. A stretcher was brought and the bodies were removed to a room in the works. A little later another body was found and was identified from the clothing as that of a boy called Cullingworth whose parents keep a tavern close by.

The work of removing the metal now proceeded more rapidly and by nine o'clock three more bodies had been found making seven in all. By this time the authorities had satisfied themselves that if there were more bodies under the metal, of which there was still an immense mass to remove, life must be extinct, and it was decided to suspend work until next morning.