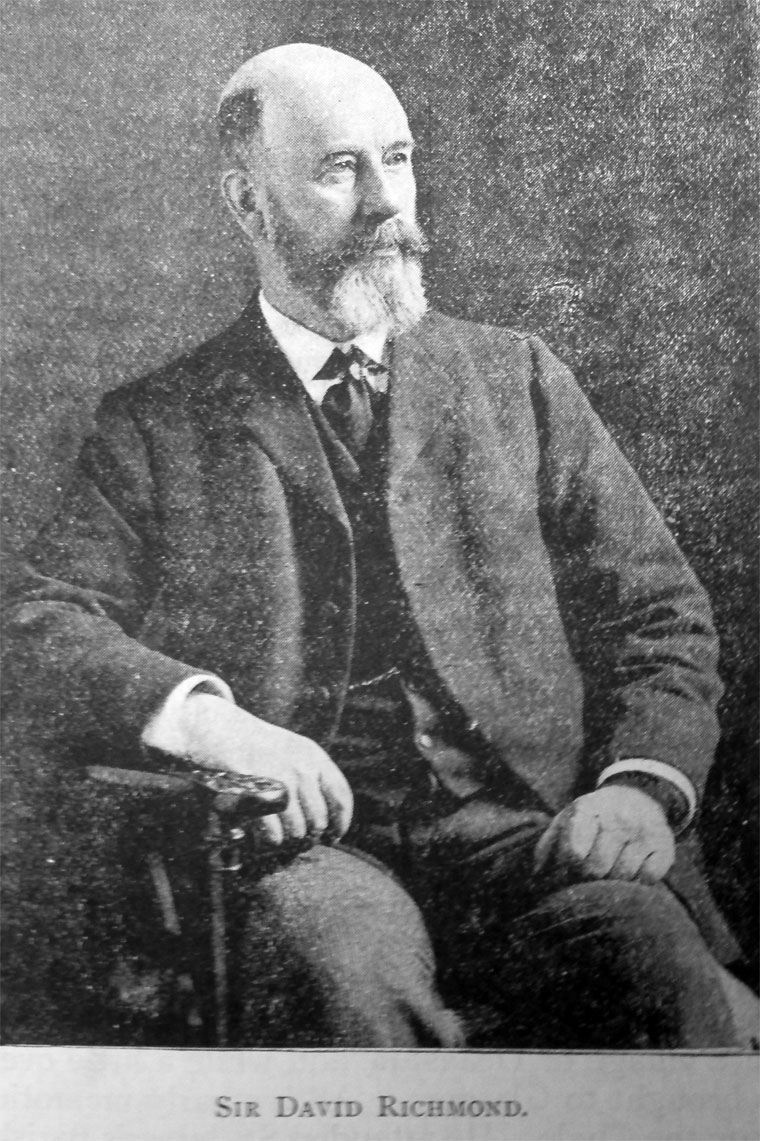 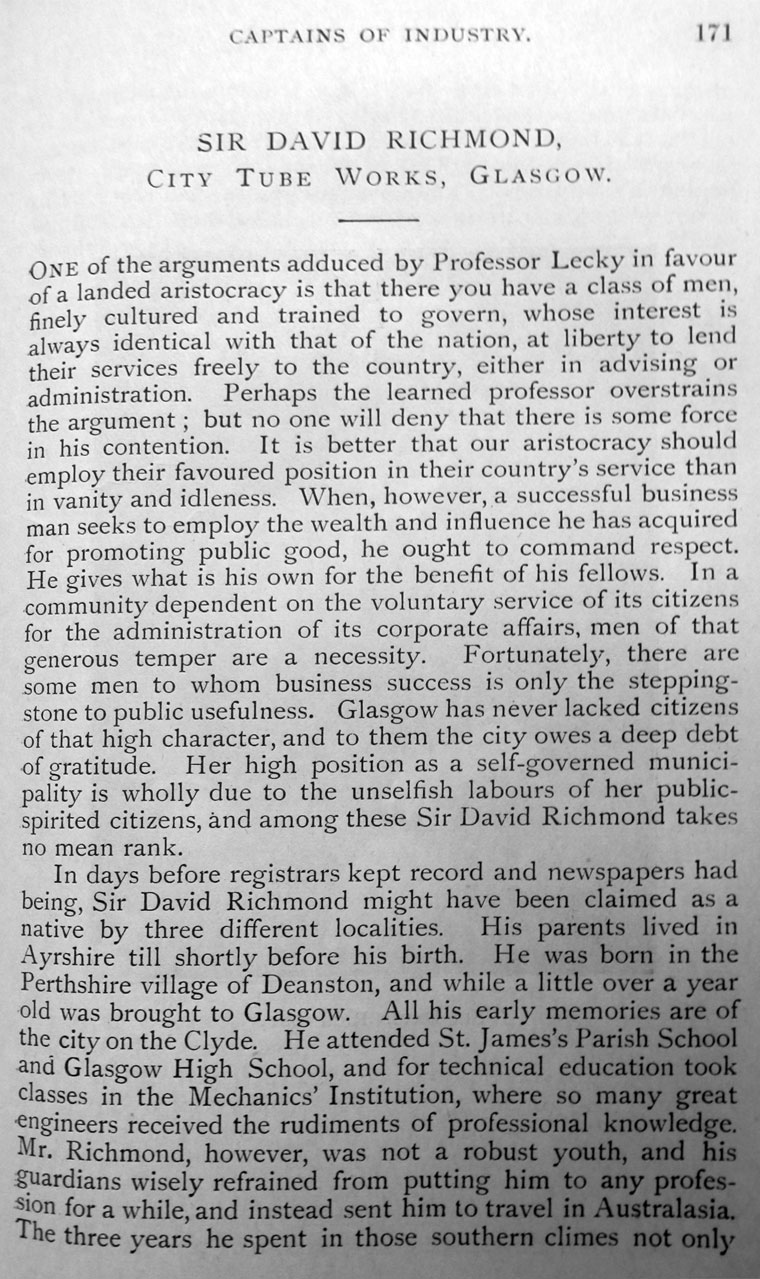 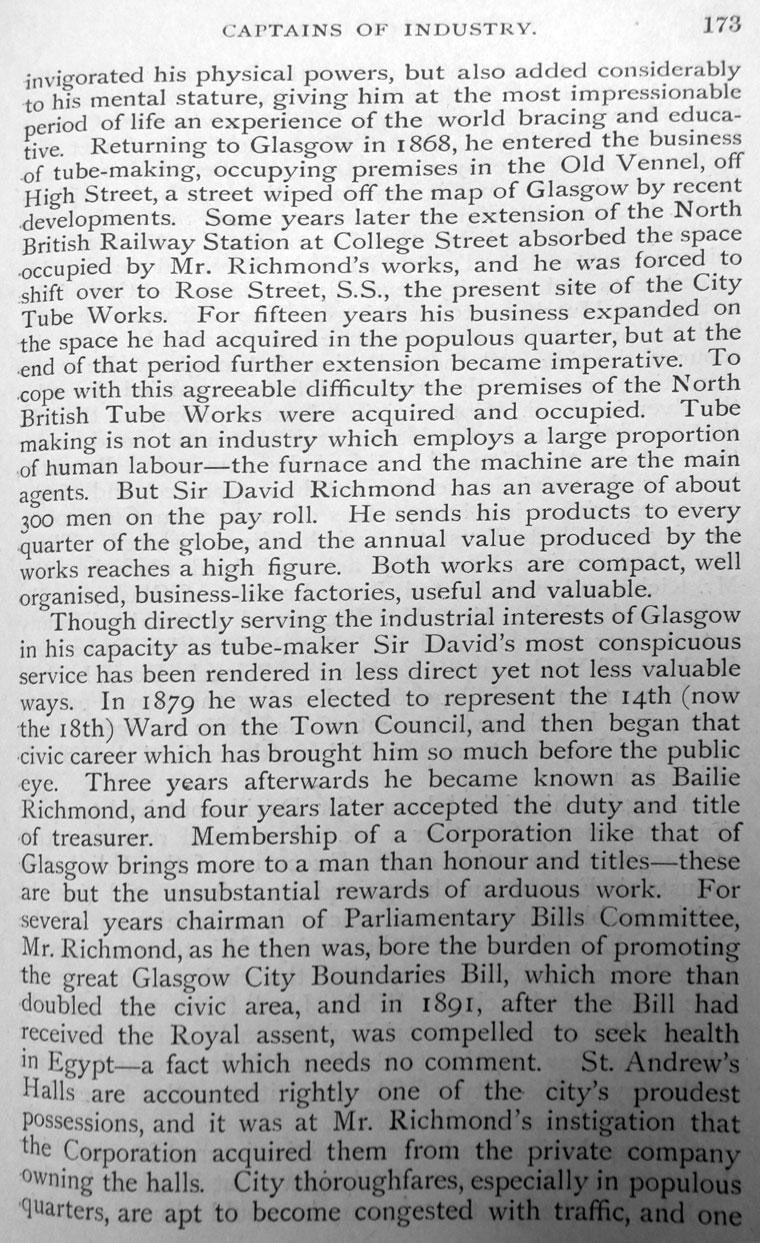 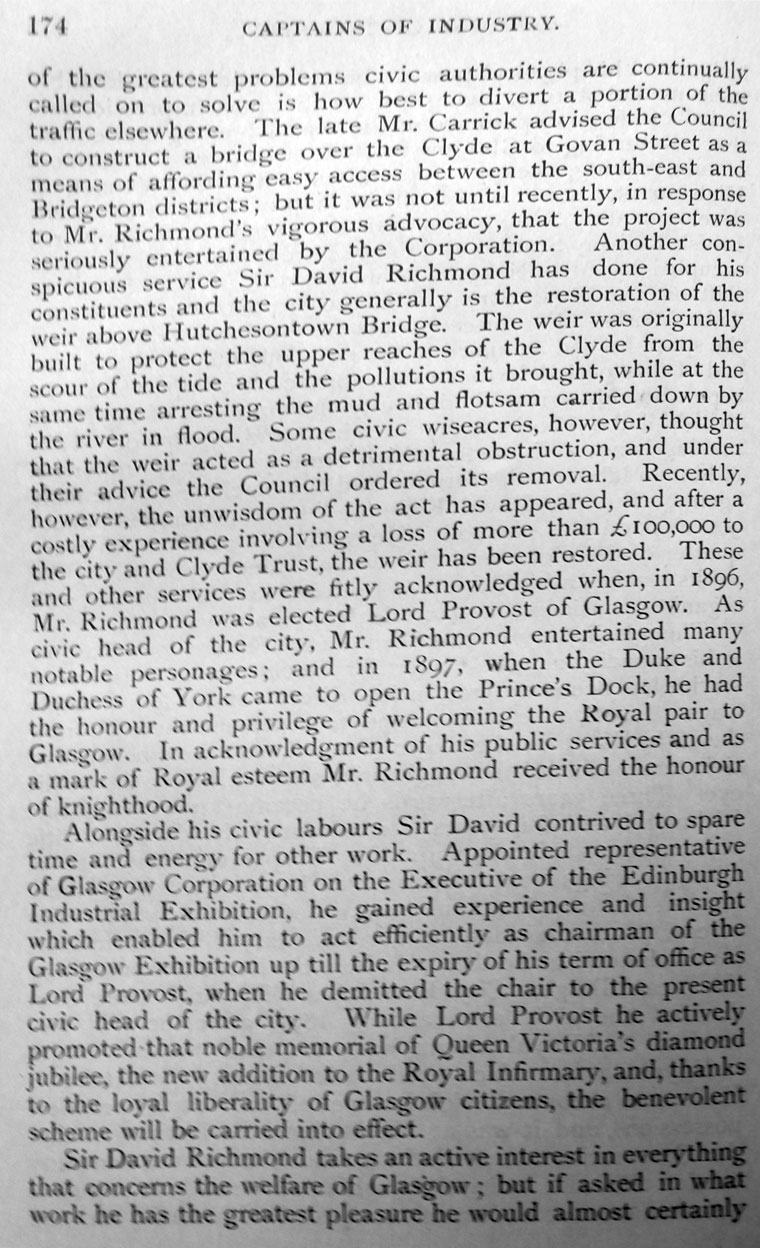 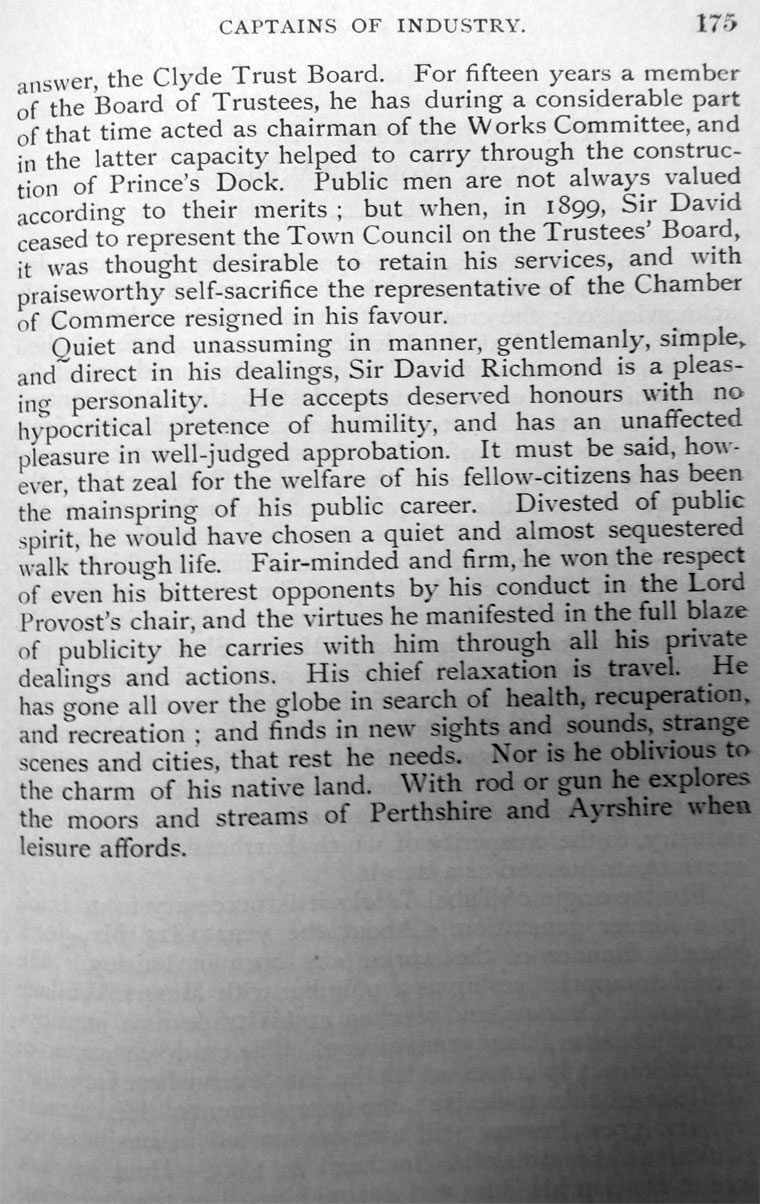 ONE of the arguments adduced by Professor Lecky in favour of a landed aristocracy is that there you have a class of men, finely cultured and trained to govern, whose interest is always identical with that of the nation, at liberty to lend their services freely to the country, either in advising or administration. Perhaps the learned professor overstrains the argument; but no one will deny that there is some force in his contention. It is better that our aristocracy should employ their favoured position in their country's service than in vanity and idleness. When, however, a successful business man seeks to employ the wealth and influence he has acquired for promoting public good, he ought to command respect. He gives what is his own for the benefit of his fellows. In a community dependent on the voluntary service of its citizens for the administration of its corporate affairs, men of that generous temper are a necessity. Fortunately, there are some men to whom business success is only the steppingstone to public usefulness. Glasgow has never lacked citizens of that high character, and to them the city owes a deep debt of gratitude. Her high position as a self-governed municipality is wholly due to the unselfish labours of her public-spirited citizens, and among these Sir David Richmond takes no mean rank.

In days before registrars kept record and newspapers had being, Sir David Richmond might have been claimed as a native by three different localities. His parents lived in Ayrshire till shortly before his birth. He was born in the Perthshire village of Deanston, and while a little over a year old was brought to Glasgow. All his early memories are of the city on the Clyde. He attended St. James's Parish School and Glasgow High School, and for technical education took classes in the Mechanics' Institution, where so many great engineers received the rudiments of professional knowledge. Mr. Richmond, however, was not a robust youth, and his guardians wisely refrained from putting him to any profession for a while, and instead sent him to travel in Australasia. The three years he spent in those southern climes not only invigorated his physical powers, but also added considerably to his mental stature, giving him at the most impressionable period of life an experience of the world bracing and educative.

Returning to Glasgow in 1868, he entered the business of tube-making, occupying premises in the Old Vennel, off High Street, a street wiped off the map of Glasgow by recent developments. Some years later the extension of the North British Railway Station at College Street absorbed the space occupied by Mr. Richmond's works, and he was forced to shift over to Rose Street, S.S., the present site of the City Tube Works. For fifteen years his business expanded on the space he had acquired in the populous quarter, but at the end of that period further extension became imperative. To cope with this agreeable difficulty the premises of the North British Tube Works were acquired and occupied. Tube making is not an industry which employs a large proportion of human labour — the furnace and the machine are the main agents. But Sir David Richmond has an average of about 300 men on the pay roll. He sends his products to every quarter of the globe, and the annual value produced by the works reaches a high figure. Both works are compact, well organised, business-like factories, useful and valuable.

Though directly serving the industrial interests of Glasgow in his capacity as tube-maker Sir David's most conspicuous service has been rendered in less direct yet not less valuable ways. In 1879 he was elected to represent the 14th (now the 18th) Ward on the Town Council, and then began that civic career which has brought him so much before the public eye. Three years afterwards he became known as Bailie Richmond, and four years later accepted the duty and title of treasurer. Membership of a Corporation like that of Glasgow brings more to a man than honour and titles — these are but the unsubstantial rewards of arduous work. For several years chairman of Parliamentary Bills Committee, Mr. Richmond, as he then was, bore the burden of promoting the great Glasgow City Boundaries Bill, which more than doubled the civic area, and in 1891, after the Bill had received the Royal assent, was compelled to seek health in Egypt — a fact which needs no comment.

St. Andrew's Halls are accounted rightly one of the city's proudest possessions, and it was at Mr. Richmond's instigation that the Corporation acquired them from the private company owning the halls. City thoroughfares, especially in populous quarters, are apt to become congested with traffic, and one of the greatest problems civic authorities arc continually called on to solve is how best to divert a portion of the traffic elsewhere. The late Mr. Carrick advised the Council to construct a bridge over the Clyde at Govan Street as a means of affording easy access between the south-cast and Bridgeton districts: but it was not until recently, in response to Mr. Richmond's vigorous advocacy, that the project was seriously entertained by the Corporation.

Another conspicuous service Sir David Richmond has done for his constituents and the city generally is the restoration of the weir above Hutchesontown Bridge. The weir was originally built to protect the upper reaches of the Clyde from the scour of the tide and the pollutions it brought, while at the same time arresting the mud and flotsam carried down by the river in flood. Some civic wiseacres, however, thought that the weir acted as a detrimental obstruction, and under their advice the Council ordered its removal. Recently, however, the unwisdom of the act has appeared, and after a costly experience involving a loss of more than £100,000 to the city and Clyde Trust, the weir has been restored. These and other services were fitly acknowledged when, in 1896, Mr. Richmond was elected Lord Provost of Glasgow. As civic head of the city, Mr. Richmond entertained many notable personages: and in 1897, when the Duke and Duchess of York came to open the Prince's Dock, he had the honour and privilege of welcoming the Royal pair to Glasgow. In acknowledgement of his public services and as a mark of Royal esteem Mr. Richmond received the honour of knighthood.

Alongside his civic labours Sir David contrived to spare time and energy for other work. Appointed representative of Glasgow Corporation on the Executive of the Edinburgh Industrial Exhibition, he gained experience and insight which enabled him to act efficiently as chairman of the Glasgow Exhibition up till the expiry of his term of office as lord Provost, when he demitted the chair to the present civic head of the city. While Lord Provost he actively promoted that noble memorial of Queen Victoria's diamond jubilee, the new addition to the Royal Infirmary, and, thanks to the loyal liberality of Glasgow citizens, the benevolent scheme will be carried into effect.

Sir David Richmond take an active intent in everything that concerns the welfare of Glasgow but if asked in what work he has the great pleasure he would almost certainly answer, the Clyde Trust Board. For fifteen years a member of the Board of Trustees, he has during a considerable part of that time acted as chairman of the Works Committee, and in the latter capacity helped to carry through the construction of Prince's Dock. Public men are not always valued according to their merits; but when, in 1899, Sir David ceased to represent the Town Council on the Trustees' Board, it was thought desirable to retain his services, and with praiseworthy self-sacrifice the representative of the Chamber of Commerce resigned in his favour.

Quiet and unassuming in manner, gentlemanly, simple, and direct in his dealings, Sir David Richmond is a pleasing personality. He accepts deserved honours with no hypocritical pretence of humility, and has an unaffected pleasure in well-judged approbation. It must be said, however, that zeal for the welfare of his fellow-citizens has been the mainspring of his public career. Divested of public spirit, he would have chosen a quiet and almost sequestered walk through life. Fair-minded and firm, he won the respect of even his bitterest opponents by his conduct in the Lord Provost's chair, and the virtues he manifested in the full blaze of publicity he carries with him through all his private dealings and actions. His chief relaxation is travel. He has gone all over the globe in search of health, recuperation, and recreation; and finds in new sights and sounds, strange scenes and cities, that rest he needs. Nor is he oblivious to the charm of his native land. With rod or gun he explores the moors and streams of Perthshire and Ayrshire when leisure affords.

. . . chairman of the Clyde Trust. . . he began business on his own account as a manufacturer of iron tubes at the original City Tube Works, removing later to the works of the same name in Hutchesontown. Under his guidance the business became so successful that the Hutchesontown works soon proved insufficiently large to meet the trade, and, accordingly, the North British Tube Works, Govan, were acquired . . . [more]

Sir DAVID RICHMOND, ex-Lord Provost of the city of Glasgow, and chairman of the Clyde Trust, died on January 15, in his sixty-fifth year, at his house, Broompark, Pollokshields. He was noted less perhaps as the founder of a highly successful tube-making business than as an indefatigable worker not only in connection with the civic affairs of Glasgow, but in all matters concerned with the development of its industries, and especially of the river Clyde, its docks, shipping, and shipbuilding. He was born in Deanston, Perthshire, in 1843. His parents, in the year following, removed to Glasgow, and he received most of his education in the High School of the city. Ill-health overtaking him just as he had completed his education, he went to Australia and New Zealand to regain his strength, returning with enlarged experience in 1866.

Two years later he began business on his own account as a manufacturer of iron tubes at the original City Tube Works, removing later to the works of the same name in Hutchesontown. Under his guidance the business became so successful that the Hutchesontown works soon proved insufficiently large to meet the trade, and accordingly the North British Tube Works, Govan, were acquired, and have had to be considerably extended since.

From 1879 till his retirement in 1899 he served in the Town Council of Glasgow, in that time filling all the chief offices, including the Lord Provostship, to which position he was elected in 1896. It was largely owing to his exertions that the Prince's Dock was constructed.

In 1899, the third year of his occupancy of the Lord Provostship, he received his knighthood. Although, in virtue of his provostship, he had previously occupied the position, the latest public appointment conferred on him was that of chairman of the Clyde Trust in November 1907.