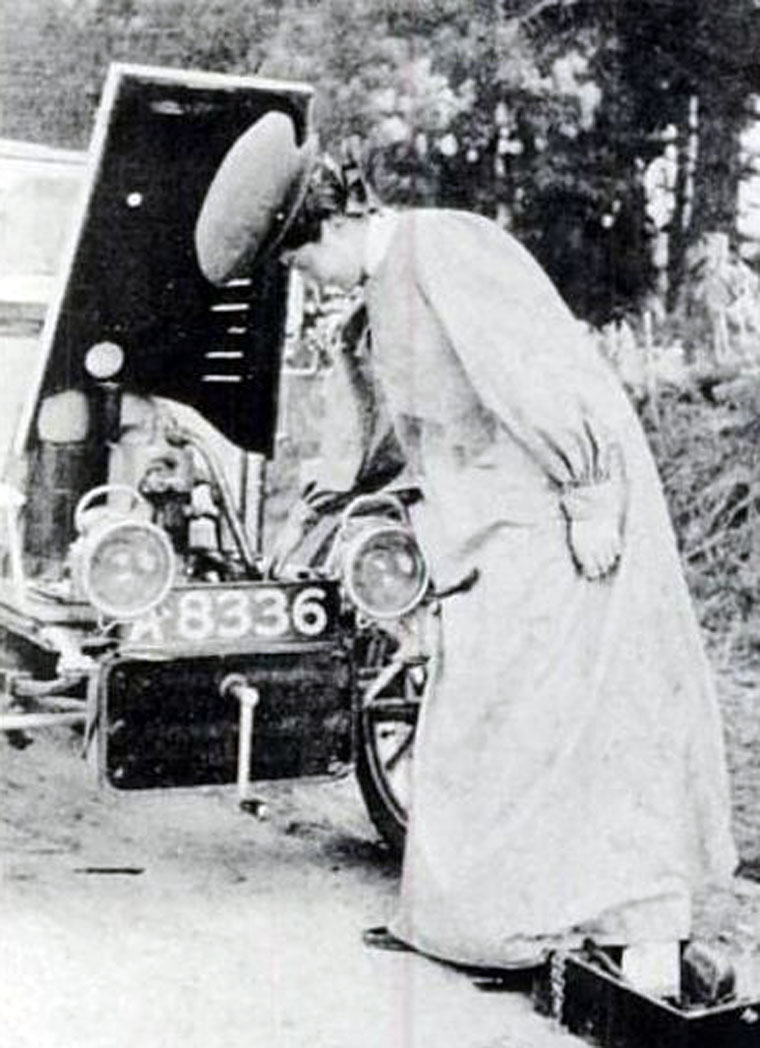 Dorothy E. Levitt (1882-1922) was the assumed name of Elizabeth Levi / Elizabeth Levit a motorina and 'sporting motoriste' in the early part of the 20th Century.

Dorothy's family origins are not clear, she was possibly born 'Elizabeth Levi', the daughter of 'tea dealer' Jacob Levi and his wife Julia, as Jacob had apparently 'anglicised' his name to John Levit by the 1901 census. She had a sister Elsie Ruby who married Mark Solomon Clarence Lewis.

She was originally employed as a secretary at Napier works in 'Vine street' Lambeth.

"Selwyn Edge, Director of the Napier Car Company and famous racing driver ... spotted Miss Dorothy Levitt amongst his staff, a beautiful secretary with long legs and eyes like pools. In a bid to promote his cars ... Edge decided that she should take part in a race, though first he had to teach her to drive. She surpassed his expectations by winning her class in the 1903 Southport Speed Trials, and proved such a good driver that she was taken on by De Dion for a major publicity stunt." [1]

In May 1903, Dorothy E. Levitt took part in the Glasgow to London Motor Trial in a Gladiator. [2]

On July 4 1903 Dorothy Levitt won her class at the Southport Speed Trials driving a S. F. Edge's 12 h.p. Gladiator,[3] shocking British society as she was the first woman, a working secretary, to compete in a 'motor race'. She became noted for racing in a dust coat (a loose coverall coat reaching down to the ankles), matching hat and veil.

On 25 July 1903 at the 'Sun-Rise Hill Climb' near Edgehill in Warwickshire she was the official passenger of S. F. Edge because her Gladiator was a non-starter.

In 1903 she was reportedly the first Woman Driver to win an automobile race at Cowes on the Isle of Wight.

1903 Dorothy Levitt and her friend Hena Frankton claimed damages against a GPO van driver who had hit their car, receiving compensation of £35. [4]

On Nov 6th 1903 she was summonsed to appear at 'Marlborough Street Assizes' for speeding in Hyde Park. She was said to have driven at a "terrific pace" and, when stopped, apparently "said she would like to drive over every policeman and wished she had run over the sergeant and killed him." Although she did not appear personally, the magistrate, Mr Denman, fined her £5 with 2s costs. The other six 'motoring defendants' that day were only fined £2 plus costs.

In 1904 Dorothy Levitt raced an officially entered De Dion car in the Hereford 1,000-mile trial, and only mechanical problems on the final day, which she repaired herself, prevented her from winning a gold medal. [5]

In March 1905 Levitt established a new record for the 'longest drive achieved by a lady driver'. She drove a De Dion-Bouton from London to Liverpool and back in 2 days, without the aid of a mechanic but accompanied by an official observer, her pet Pomerainian dog "Dodo", plus a revolver. At 07:00 on March 29 1905 she departed from the De-Dion showroom in Great Marlborough Street London, and arrived at the Adelphi Hotel in Liverpool at 18:10, having completed the 205 miles in 11 hours.

In 1905 Levitt drove an 80 h.p. Napier at the inaugural Brighton Speed Trials, winning both her class and the Autocar Challenge Trophy. She also drove a 100 h.p. development of the Napier K5 at the Blackpool Speed Trials. A ‘works drive’ in a French Mors in the inaugural Tourist Trophy Race on the Isle of Man had been prohibited by Selwyn Edge in order to protect the reputation of his Napier marquee. Ironically the 208-mile race was won by Mr. J. S. Napier in his Arrol-Johnston car, ahead of 40 competitors. [7]

At the Blackpool Speed Trial in 1906 she broke the 'Women's World Speed Record' by recording a speed of 90.88 mph over a flying kilometre, driving the 100 h.p .development of the Napier K5-L48. She was described as "the fastest girl on Earth".

She also set the Ladies' Record at the Shelsley Walsh Speed Hillclimb in a 50 h.p. Napier (7,790 cc), making the climb in 92.4 seconds, 12 seconds faster than the male winner and around three minutes faster than the previous record set by Miss Larkins and sixth fastest overall. Her record stood until 1913.

In 1907 the newly opened Brooklands circuit would not accept her entry, even though she was vouchsafed by S. F. Edge, and it continued to reject women drivers until 1908.

1907 June. She won a gold medal in the Herkomer Trophy meeting in Frankfurt driving a Napier.[10]

In October she won her class in the Gaillon Hillclimb in France, driving a 40 h.p. 6-cyl Napier.

She is reported to have finished second in the Bexhill on Sea Speed Trial along the sea front.

Her 1908 schedule was hectic and successful. In June she drove a 45 h.p. Napier to win a silver plaque in the Prinz Heinrich Trophy at the Herkomer Trophy Trial in Germany. In July her 60 Hp Napier was second fastest of over 50 competitors at the Aston Clinton Hill Climb in Buckinghamshire. In August she competed at La Cote du Calvaire hill climb at Trouville in France.

She was effectively both a 'works driver' and publicist for Napier cars owned by Selwyn Edge, plus also being his mistress for a period.

In 1903 Dorothy Levitt 'won' the inaugural British International Harmsworth Trophy for speedboats at Cork Harbour in Ireland. She achieved 19.3 mph in a 40-foot (12 m) steel-hulled, 'Napier' speedboat fitted with a 3 blade propeller, owned by Selwyn Edge. S. F. Edge was both the owner and entrant of the boat, and thus S. F. Edge is engraved on the Trophy as the winner. The third crew member Campbell Muir may also have taken the controls.

In 1909 Dorothy Levitt attempted to qualify as a pilot at the Hubert Latham School of Aviation at 'Chalons Camp' Mourmelon-le-Grand between Châlons-en-Champagne and Rheims in France. She attended along with Marie Marvingt and Raymonde de Laroche, the only woman ever licenced in the difficult to fly Antoinette monoplane.

Dorothy became a member of "The Aero Club of the United Kingdom" in January 1910, and was booked to give a talk at the 'Criterion Restaurant' on Thursday, March 3rd, 1910 about her experiences 'learning to fly'.

She became the leading exponent of a woman's "right to motor" and in 1909 published The Woman and the Car: A Chatty Little Hand Book for Women Who Motor or Want to Motor, based on her newspaper column in The Graphic. She also gave many lectures to encourage women to take up motoring.

Believed to be living at flat in Portman Mansions, Paddington until 1913