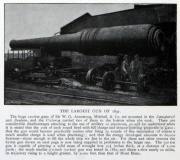 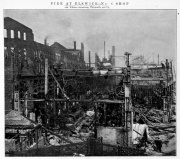 1859 William Armstrong was appointed government engineer for rifled ordnance and superintendent of the royal gun factory at Woolwich but the factory was unable to produce the Armstrong design of guns so, whilst it was being reconstructed, the Elswick ordnance factory was established alongside the Elswick engine works, exclusively to supply the government with Armstrong guns. The partners were George Cruddas, Richard Lambert, and George Wightwick Rendel who was also appointed manager of the works.

1860 Armstrong persuaded Andrew Noble, an artillery officer who had been secretary to the rifled ordnance committee, to become joint manager of the works.

Public controversy arose over the government monopoly enjoyed by the Elswick ordnance factory, and by rival claims of other inventors and manufacturers, especially Joseph Whitworth.

Soon after the completion of the reconstruction of Woolwich, the government withdrew its unconditional support for the Elswick ordnance factory. Armstrong resigned his government positions in 1863.

c.1863 The Elswick Ordnance Co merged with what was by then Sir W. G. Armstrong and Co, and the focus turned to finding overseas orders.

Between 1863 and 1878 the Elswick factory only received about £65,000 of government orders. Meanwhile, the army decided to abandon the construction of Armstrong-type guns and reverted to muzzle loading with simple three-groove rifling. It took 20 years to persuade the authorities of the merits of the Elswick design.

1876 120-ton sheer legs at Elswick[1] featured a hydraulic ram for lifting the load, worked by water pressure at 900 psi from the works' hydraulic mains. The sheers were used in shipping 100-ton gun barrels to Italy.

1881 Work in progress at the Elswick Works included a 45-ton crane for Valparaiso and a lighthouse for Brazil[2]. Some special machine tools included a Whitworth lathe of 36" centre height and 44 ft 6" between centres, another by Fairbairn, Kennedy and Naylor, modified at Elswick, which could swing work 20 ft dia and 4 ft 6" long or 8 ft dia and 34 ft long

1881 The Institution of Mechanical Engineers visited the Elswick Works and published their description in The Engineer. Read it at the links below;

20th century: it became essential, due to the increasing size of ships, to find a yard below the Tyne bridges; as a consequence what is now known as the Armstrong Naval Yard came into being.