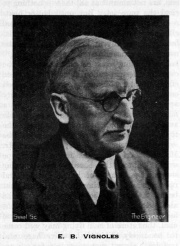 ERNEST BLACKER VIGNOLES, who died on the 10th November, 1948, in his 84th year, was of Huguenot descent. He received his early education at Malvern College and in Germany and France, and his engineering education at the Central Technical College, South Kensington. In 1889 he entered the works of W. T. Goolden and Co. as a pupil, going through the various shops, and eventually working in the Instrument Department under the late Sydney Evershed, who had been made Manager of the Department in 1886. With their researches on electromagnetic induction there began a lifelong association and friendship which was to mean much to both of them. In 1895, the firm having become Easton, Anderson and Goolden, a new company was formed to purchase the instrument section of the business, Evershed and Vignoles being the Managing Directors; the latter also undertook the work of Secretary. In 1904, when Evershed produced the first Insulation Testing Set in one case, Vignoles coined the well-known adjective "Megger."

As time went on, Vignoles gave his attention chiefly to the development of the business at home and abroad and to the financial side of the concern. He retired from the position of Managing Director and Secretary in 1931, but maintained an active interest in the affairs of the Company, retaining his seat on the Board, of which he was for some years Chairman.

Vignoles had many interests apart from his profession; he had a wide knowledge of music, Italian art and early church architecture; he was also an able photographer, and at one time showed his work at the Royal Photographic Society's, and other, exhibitions. He travelled extensively in France and Italy, and later went further afield; his journeys were recorded in copious diaries illustrated with his own photographs. In the last few years of his travels he adopted cine-photography and brought back interesting films, many in colour, from such remote places as Honolulu, Fiji, and the Dutch East Indies. Using these films he gave his own "Travelogues" in the Village Hall of Streatley-on-Thames, where he lived for many years. He was also a keen gardener, specializing in apples, which he grew to perfection, and was never so happy as when some tree-felling had to be done or logs sawn or split for the wood fires he loved.

He joined The Institution as an Associate in 1889 and was elected a Member in 1901. He had served on the British Committee of the International Electrotechnical Commission, and was on the Council of the British Electrical and Allied Industries Research Association for a number of years, serving for a term as Chairman. He never married.