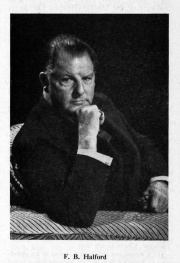 1894 March 7th. Born in Nottingham the son of Harry Baker Halford, an Estate Agent, and his wife Ethel.

1913 He left the University of Nottingham, before graduating, to learn to fly at the Bristol Flying School, Brooklands and became a flight instructor using Bristol Boxkites.

WWI He served in the Aeronautical Inspection Department of the Air Ministry as an engine examiner, and the Royal Flying Corps where he fought at the front.

Recalled to engineering duties he improved and enlarged the water-cooled six-cylinder Austro-Daimler, producing the 230 hp (170 kW) Beardmore-Halford-Pullinger (BHP). This engine was further developed by Siddeley-Deasy as the Puma. This work was done with Arrol-Johnston in Dumfries where he worked with T. C. Pullinger. In the B.H.P. Halford departed from the practice of using single large inlet exhaust valves, and used two small exhaust valves and a single large inlet valve per cylinder. When the design was turned over to Siddeleys, they changed the cylinder heads and water jackets to aluminium and the name to Puma. They made over 6,000 Pumas.[3]

1918 Halford joined Ricardo's and spent two and a half years in the U.S.A. selling licence agreements for Ricardo patents

1922 Halford rode a 4-valve Ricardo Triumph in the Senior TT, finishing 13th. That same year he was commissioned to produce a luxury motorcycle for Vauxhall. Based on aero-engine principles, it featured an in-line unit construction four-cylinder engine, with shaft drive to the rear wheel. Four examples were made, one exists in a private collection in the Isle of Man.

1923 He set up his own consultancy in London.

c1924 He produced and raced the Halford Special based on the chassis of an early side-valve Aston Martin tourer. This was a 63mm x 80mm giving 1.5 Litres and was later fitted with a supercharger.[4]

1924 He was engaged by the Aircraft Disposal Co to see how its stock of wartime engines could be modernised for resale; first the 80 h.p. Renault vee was given a redesigned cylinder head and valve gear which produced 140 h.p.; this was then called the Airdisco [5]

In response to the needs of Halford's old friend, Geoffrey de Havilland, for an engine suitable for a light aeroplane, the Cirrus engine was developed, essentially half an Airdisco; the first engine was built very quickly and rated, originally, at 60 h.p. This powered a very successful aeroplane — the Moth.

Through his consultancy, he designed the famous de Havilland Gipsy air-cooled inline engines, copying the success of the Cirrus engines in the general aviation role.

During this period Frank Halford also designed and had built the AM Halford Special racing car which he raced at Brooklands in the 1926 RAC British Grand Prix, as well as in many other races in 1925 and 1926.

During the 1930s Halford and Ricardo became interested in the sleeve valve as a method of increasing the allowable operating RPM of piston engines, thereby increasing the power from an otherwise smaller engine.

1935 Halford became the technical director of the Napier engine company, a position he held until 1944. Halford worked with Napier and Son on their Sabre design, which would go on to be one of the most powerful piston aero engines, producing 3,500 hp (2.6 MW) from only 2200 cubic inches (36l) in late-war versions.

WWII Developed propellers for De Havillands. At the request of the government, he entered the field of jet engines in 1941, and designed a simplified version of Frank Whittle's designs with the air intake on the front and "straight-through" combustion chambers. Known initially as the Halford H.1, the project was taken up by de Havilland who produced it as the de Havilland Goblin.

1945 appointed a director of the parent De Havilland Aircraft Company.

He was responsible for the design of a number of aircraft engines, including the De Havilland Gipsy, the Goblin, the Gyron and the Ghost, which powers the Comets. He also designed the Nimbus, Napier Rapier, Dagger and Sabre.

During the First World War Major Halford served with the Royal Flying Corps and the RAF, and in 1919 was loaned by the Air Ministry to William Beardmore and Co. as an engine designer. Then for three years from 1924 he was engine designer to ADC Aircraft Ltd. and consulting engineer to Vickers Ltd., before joining De Havilland in 1927. He became technical director of Napiers in 1935.

The De Havilland Engine Co. was formed as a separate company under Major Halford’s direction in 1944.

In 1953 came the announcement that Major Halford and a team of experts had produced the Gyron, jet engine for the supersonic speed era. It was started a private venture and later developed under Ministry of Supply contract.

Major Halford had turned his attention to Jet engines during the Second World War, producing the Goblin, used in the Vampire aircraft.

For his paper on jet propulsion in 1946 he was awarded the Royal Society of Arts Silver Medal, and in 1948, for his great contribution to aeronautics, he received the CBE. In 1951 he was president ol the Royal Aeronautical Society.

Major Halford was the son of the late Mr. H. B. Halford, an ex-Sheriff of Nottingham.

IT is with regret that we record the death of the distinguished engine designer, Major Frank Bernard Halford, which occurred suddenly at his home in Sandy Lane, Northwood, Middlesex, on Saturday, April 16th.

He was born at Nottingham and after attending Felsted School, proceeded to Nottingham University. Just before the first world war he became a flying instructor with the Bristol School of Flying at Brooklands.

Following a short period as engine examiner for the A.I.D. in the first year of that war, he served for the remainder in the Royal Flying Corps and the Royal Air Force, being later lent, in 1919, to William Beardmore and Co., Ltd., as engine designer. The Beardmore-Halford-Pullinger (B.H.P.) six-cylinder engine was developed during this period.

He became associated with Ricardo and Co. later that year, first representing them in America and later as an engine designer in London.

In 1927, however, he joined the design staff of de Havilland Company, where he stayed for eight years until joining D. Napier and Son, Ltd., as technical director. During these various appointments he was responsible for a whole family of outstanding petrol engines, including the "Airdisco," "Cirrus," "Gipsy" and "Nimbus" , and later the Napier "H" block engines," Rapier," "Dagger, and "Sabre."

In l944 the de Havilland Engine Company was formed as a separate company under his direction and the manufacture of the "Goblin" and "Ghost" centrifugal turbo-jet engines, and the design of the supersonic jet engine, the "Gyron" established.

Major Halford was appointed C.B.E. for his contributions to aeronautics in 1948.