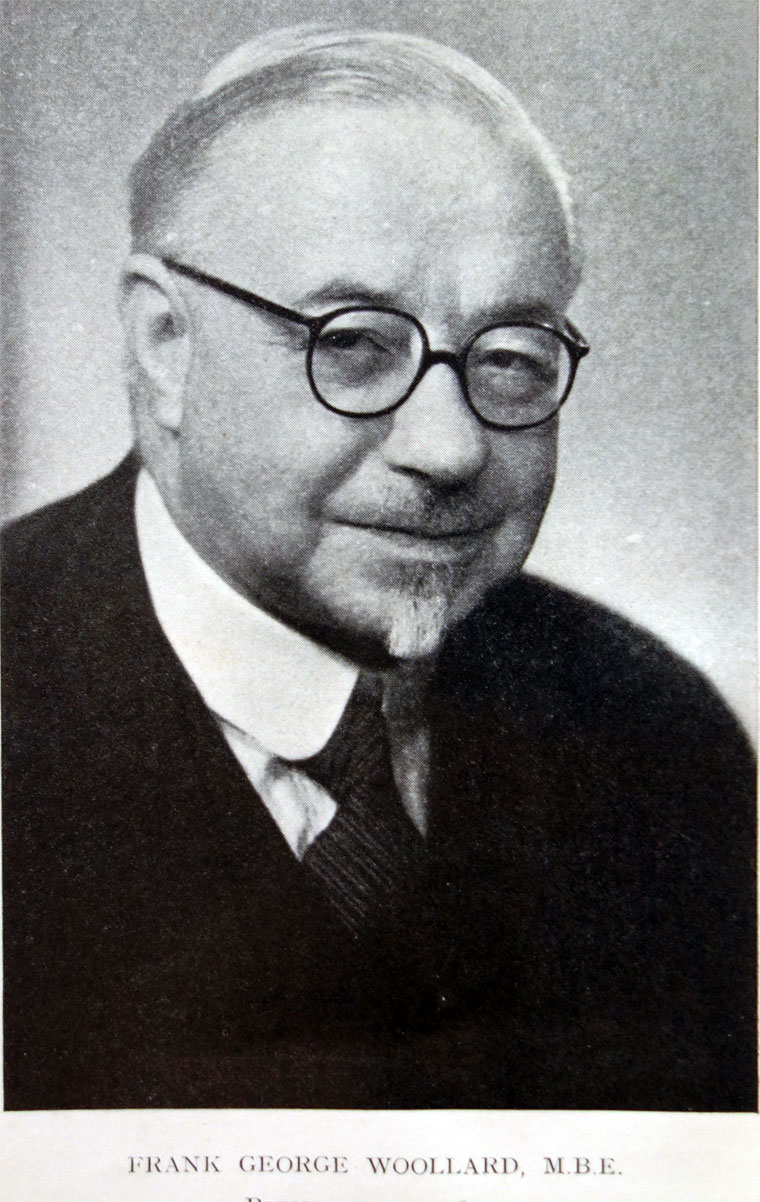 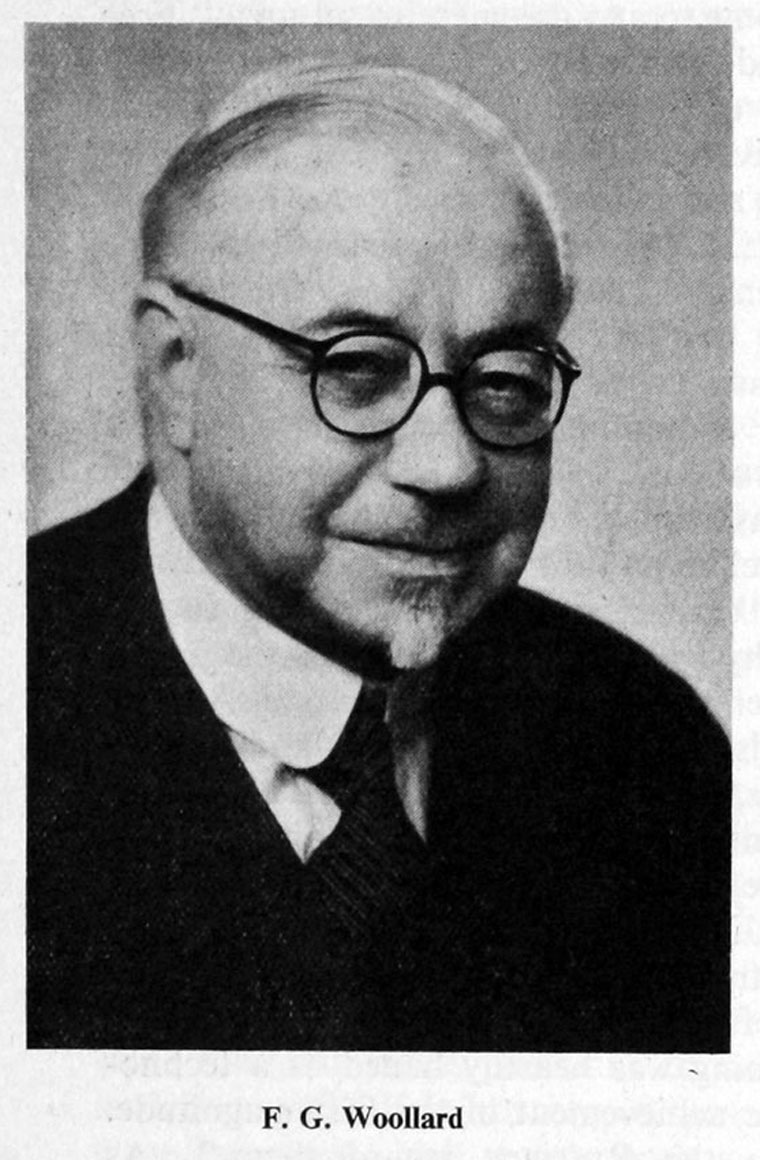 1883 September 22nd. Born in London the son of George Woollard, a Butler, and his wife Emily Powell

1914 Married Catherine Elizabeth Richards. They had a son who died in infancy and daughter Joan Elizabeth (1915-2008)

c1904 Experienced a basic form of flow production in the manufacture of railway coaches.

1910 Joined E. G. Wrigley and Co as chief draftsman in a department with a professional staff of 18

1914 Became production engineer. He re-organized production from batch to a simple form of flow to meet increased orders for vehicle components.

In January 1918 he was appointed assistant managing director of Wrigley's.

1923 January. Morris purchased the Wrigley business and Woollard was appointed general manager of Morris Engines Limited. Woollard, with William Morris’s encouragement and financial backing, immediately led the re-organization of engine production from batch to flow, increasing output from less than 300 units per week in January 1923, to 600 units per week by December 1923, and to 1,200 units by December 1924. To achieve this remarkable increase in output, Woollard developed an advanced flow production system for low volume production.

The major changes in production system design took place quickly, over a period of less than two years.

1926 Woollard joined the main board of Morris Motors

1932 Following disagreements with William Morris who kept a firm grip on policy he moved on to Managing Director of Rudge-Whitworth.

Woollard wrote numerous journal papers and trade magazine articles on his flow production system in the mid-1920 and into the late 1940s and mid-1950s. His detailed technical papers were published in 'Machinery'.

1954 He wrote 'Principles of Mass and Flow Production',

Woollard was the pioneer of Lean management.

We record with deep regret the death of Mr. Frank George Woollard, which occurred on Sunday, December 22, at his home in Birmingham. Mr. Woollard, who was seventy-four, had a distinguished career as an automobile engineer, and was undoubtedly a pioneer of flow production methods in the British motor-car industry.

Frank Woollard was educated at Goldsmith's College and Birkbeck College, in London and served an apprenticeship under Dugald Drummond, chief mechanical engineer of the London and South Western Railway.

After completing his apprenticeship he continued for some months in the drawing-office of the L.S.W.R. at Nine Elms, working mainly on the design of steam railcars.

Subsequently, round about 1906, Mr. Woollard joined the consulting firm of Medhurst and Brewer and concentrated on F. G. Wollard the development of petrol-engined locomotives and on special adaptations of the internal combustion engine.

His next appointment was with E. G. Wrigley and Co., Ltd., which he joined in 1910 as a designer. There, his work was concerned with the production of motor-car components, and for the latter part of the thirteen years which Mr. Woollard spent with the company he occupied the office of assistant managing director.

In 1923, Mr. Woollard was appointed a director and general manager of the engines branch of Morris Motors, Ltd., and during his early years there was responsible for commissioning the first automatic transfer machines for the production of engineering components.

Mr. Woollard remained with the Morris organisation for nine years and then became managing director of Rudge Whitworth, Ltd.; he left that firm in 1936 to take up an appointment as an executive director of two of the companies in the Birmid Industries group, from which he retired four years ago.

Mr. Woollard's years of retirement were very active ones, the most significant aspect of them being his energetic interest in education for industrial administration. In recent years, he contributed a great dea1 to the teaching at Birmingham Univers1ty and at the Birmingham College of Technology, where he conducted a number of executive development study groups.

About three years ago, Mr. Woollard wrote a book, 'Principles of Mass and Flow Production', in which he outlined the possibility of the automatic factory, and in which he placed particular emphasis on the human aspects of automation. The same theme was ably handled in a paper entitled 'Machines in the Service of Man', which Mr. Woollard presented to the conference on "The Automatic Factory," organised by the Institution of Production Engineers in 1955. After expounding very thoroughly the technical and social aspects of automation, he ended this paper by stressing that automation was not a device with which to outlaw, displace or dispense with man; neither was it a contrivance nor an invention to deprive man of his heritage, namely, his right to work and to enjoy the fruits of his labours. Automation, Mr. Woollard urged, was a means for increasing man's stature and for extending his ability to do more and more useful work. It must always be remembered, he added, that "men were not made for machines, but that machines were made for man."

Every man has some peculiarly individual qualities distinguishing him from his contemporaries. Mr. Woollard's qualities were especially well adapted to suit the needs of a time when, more and more, worth while things can only be done through co-operation and collaboration. In later life especially he had a very genial and attractive repose. It was as though he had somehow acquired, through a lifetime's experience, a philosophy that made it easy for him to make up his mind. Particularly likeable was his lack of censoriousness. He took people as he found them and always gave the impression that he liked what he found. No one could have been better fitted to engage in the delicate negotiations that led to the amalgamation of the "Automobiles" and the "Mechanicals "; no one could have been better fitted to be chairman of the new Division during a somewhat embarrassing first year of married experience. His liking for human beings shone out of his writings, particularly those upon automation. His first thought was always for the man, not for the machine.

Frank George Woollard was born on 22nd September 1883. He was the last President of the Institution of Automobile Engineers and the first Chairman of the Automobile Division when the amalgamation of the two Institutions was effected in 1947. He took a leading part in all the details of that amalgamation.

He was educated at the City of London School and at Goldsmith and Birkbeck Colleges. From 1900 to 1905 he served his apprenticeship with the Chief Mechanical Engineer of the London and South Western Railway at Eastleigh where he played a part in the design of the famous Clarkson steam omnibus. This caused him to transfer his activities to the motor vehicle field and he achieved a wide experience of activities associated with the design and manufacture of transport vehicles.

First he joined the design staff of Weigel Motors, Ltd., well known in motor racing circles in the middle of the first decade of this century; from that company he went as Chief Draughtsman to E. G. Wrigley and Co., Ltd., of Birmingham, subsequently becoming Chief Engineer and then, from 1910 to 1922, Assistant Managing Director.

During that period he developed the continuous production or flow-line method of machining automobile components, putting into production under sub-contract from Lord Nuffield, then Mr. W. R. Morris, the front and rear axles and the gearboxes for the first 'bull nose' Cowley motor car which went into serial production.

Later he was appointed by Lord Nuffield to take over the engine factory of Hotchkiss et Cie at Coventry, in 1923 becoming Director and General Manager of the Engines Branch of Morris Motors, Ltd., Coventry, where Lord Nuffield gave him every encouragement to develop the continuous production method. As a consequence of this the Morris Engine Works became an outstanding example of the mass production system in Britain.

In 1932 he became Managing Director of Rudge-Whitworth, Ltd., and then in 1936 he joined the Birmid Industries Group as a Director of Birmingham Aluminium Casting (1903) Co., Ltd., and the Midland Motor Cylinder Co., Ltd., where he remained until his retirement in 1953.

Frank Woollard made many contributions to the technical literature and, in 1954, his chief written work `Principles of Mass and Flow Production' was published, in which he outlined the possibilities of the automatic factory.

During his retirement he displayed a vigorous interest and played an active part in education for industrial administration at the University of Birmingham and at the College of Technology, Birmingham.

Frank Woollard was a man who endeared himself to his many professional associates, many of whom became his firm personal friends. It may truly be said of him that he was one of the fathers of the British motor industry, and that he pioneered the introduction or flow production in Britain and became recognized as a world authority on automation.