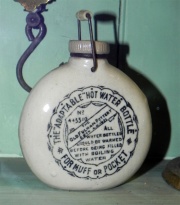 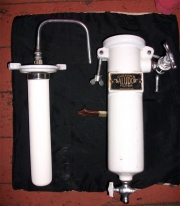 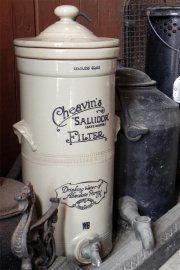 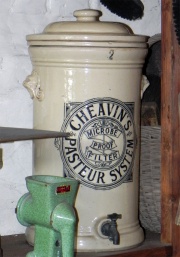 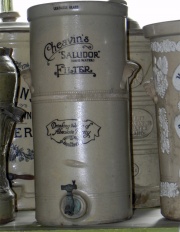 Exhibit at the Museum of Lincolnshire Life. 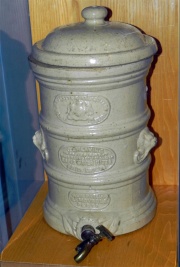 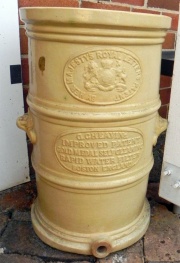 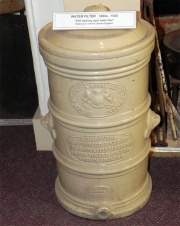 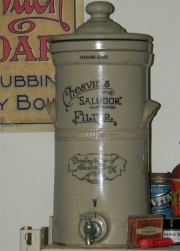 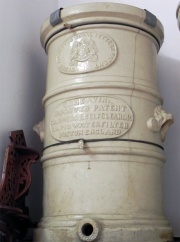 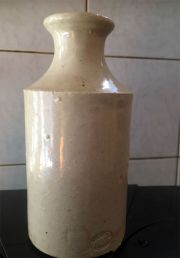 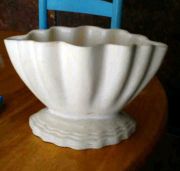 The Fulham Pottery was said to have been started by John Dwight (c1637-1703), first of the distinguished English potters, producer of works in stoneware.

In the later 1650s he worked in the laboratory of the distinguished scientist Robert Boyle, in company with Robert Hooke. After taking the degree of bachelor of civil law at Christ Church, Oxford, Dwight was appointed registrar and scribe to the diocese of Chester where he stayed until 1668

1665 He moved to Wigan and tried experiments into making china ware. When he felt he had succeeded, he sold his ecclesiastical office and moved to Fulham, London, encouraged by Boyle and Hooke

1671 Dwight took out a patent for “transparent earthenware, commonly knowne by the names of porcelaine or china” and “stoneware, vulgarly called Cologne ware.” He did not actually make porcelain; the partly translucent quality of his stoneware apparently led him to mistake it for that material.

1672 Dwight discovered a process for making salt-glazed stoneware which was to be the source of financial success for his pottery; William Killigrew submitted a patent application for the same process 13 days after Dwight in April 1672. Dwight's determination to set new standards of ceramic refinement, his employment of the best available throwers, lathe-turners, etc and his invention of new types of decoration, together with his ceaseless pursuit of the secret of porcelain, set him apart from other potters of the seventeenth century. Despite searching, Dwight was unsuccessful in finding china stone to mix with his china clay - this was eventually found in Cornwall in 1745 by William Cookworthy.

1693-1696 Dwight was involved in lawsuits with 19 other potters over infringements of his stoneware patent. Despite his efforts to contain the secrets of lathe-turned salt-glazed stoneware, the knowledge spread rapidly from the 1690s, eventually reaching Staffordshire, where by the 1720s it had developed into a major industry, the basis of the later wealth of the Staffordshire potteries.

The most important works from Dwight's pottery are finely modelled stoneware busts and statues, including busts of Prince Rupert of the Rhine and Charles II, a recumbent half figure of his daughter, and various classical figures, all by an unknown modeller. Dwight's figures can be seen more as ceramic sculpture than as the precursors of Staffordshire pottery figures.

Among the useful objects attributed to his pottery are various stoneware bottles and mugs. His brown salt-glazed stoneware tavern mugs and bottles formed the basis of many highly productive potteries in London, Bristol, Nottingham, and Derbyshire in the eighteenth and nineteenth centuries, especially Doulton's of Lambeth.

Though no great fortune was made by Dwight, none the less the pottery that he founded worked continuously from 1672 to 1969.

1743 The owners of the pottery were declared bankrupt[2].

1759 The last member of John Dwight's family committed suicide in the counting house[3].

1762 William White (said to be the husband of Margaret Dwight, niece of Dr. Dwight) took out a patent for the manufacture of 'white crucibles or melting potts made of British materials, and never before made in England or elsewhere and which I have lately sett up at Fulham aforesaid.'[4]

1813 the manufactory was in the hands of Mr. White, a son of the above; the articles made were chiefly stoneware jars, pots, jugs, etc.

1862 the last White died. The Fulham works were taken on by Messrs. MacIntosh and Clements

1864 On the death of the leading partner, the works were sold to Mr. C. J. C. Bailey who made considerable alterations and installed machinery to improve and extend the business[5].

1864 Charles Bailey took over the Pottery[6]. He helped to stimulate the art of stoneware pottery by working with J. C. Cazin and the Martin Brothers[7].

1888 Charles Bailey, who was operating the Fulham Pottery as Bailey and Co, was declared bankrupt[8].

1889 Bailey was fined for emitting smoke; a similar case against Sir Henry Doulton was dismissed because he had been doing his best to comply with the law[9].

1889 Sale by auction of the premises of Fulham Pottery, Church St[10].

The business became the property of the Fulham Pottery and Cheavin Filter Company Ltd.

1930 Constance Spry encouraged a line of white porcelain vases which sold well until the 1950s[13].

1970 Campaign to preserve the buildings in New Kings Road[17].

1975 Redevelopment of the site gave the public a view of the bottle kiln[18].