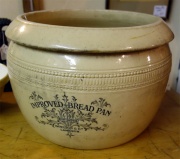 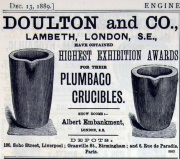 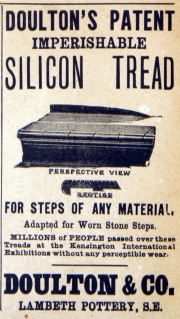 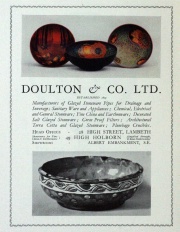 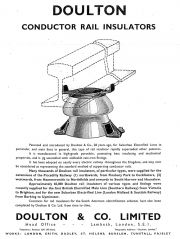 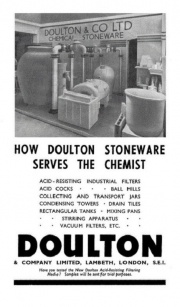 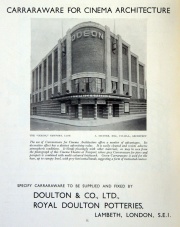 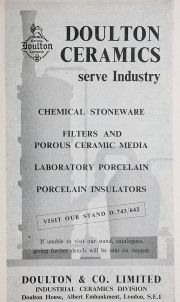 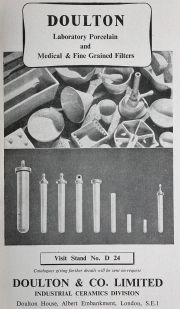 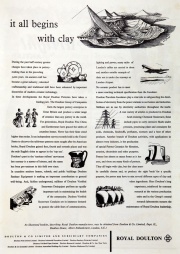 The Doulton Company produced tableware and collectables, with a history dating back to 1815. Operating originally in London, its reputation developed when it moved to The Potteries, where it was a relative latecomer compared with other leading names such as Spode, Wedgwood and Mintons. Today, its products include dinnerware, giftware, cookware, porcelain, glassware, collectables, jewellery, linens, curtains, and lighting, among other items.

Its three key brands are Royal Doulton, Royal Albert, and Minton. Together, the three brands make up Doulton Home, which is now part of the Waterford Wedgwood group. Most of the pieces in these three brands are manufactured outside the United Kingdom, in the Far East and Indonesia.

1815 John Doulton (1793–1873) used his life’s savings to make a £100 investment and become a partner in the pottery of Martha Jones in Vauxhall Walk, London, together with John Watts. The business became Jones, Watts and Doulton. It specialised in making stoneware articles, such as decorative bottles and salt glaze sewer pipes

1820 Mrs Jones withdrew from the business

1826 Doulton and Watts flourished, moving in 1826 to premises in Lambeth High Street.

Eventually 6 of John's sons joined the business including John junior (the eldest) and Henry who became an apprentice in 1835. Henry was to be the driving force behind a number of innovations which made the name of Doulton world famous. Their portfolio later extended to artistic pottery, ultimately embracing ornamental, commemorative, and tableware products.

1846 Henry Doulton left home to start his own business to make ceramic pipes for the sanitary market, taking full advantage of the revolution in sanitation then occurring. It established the world’s first stoneware pipe factory and went on to become Britain’s top Victorian manufacturer of sanitary ware. In addition Henry continued to help his father's firm of Doulton and Watts, and both concerns gradually expanded onto adjoining land and premises.

1851 Doulton and Watts and Henry Doulton and Co were jointly awarded a prize at the Great Exhibition.

1853 Doulton and Co was established by John and his son Henry as makers of fine English stoneware.

c.1857 John Sparkes, principal of the Lambeth School of Art, approached Henry Doulton with the idea of producing artistic ware. While the functional pottery business was so successful, there was little incentive to develop new product lines. Eventually Sparkes and Edward Cresy, an engineer and lifelong friend of Henry Doulton, convinced him to experiment with artistic designs. Much work was needed to solve the problems of making artware.

1862 Doulton and Watts demonstrated a potter's wheel at the International Exhibition[4].

At some point the 3 businesses of Doulton and Watts, Henry Doulton and Co and the independent pipe works owned by Henry's brother, John Doulton, junior, were brought together.

1867 Henry Doulton presented the first examples of his art pottery at the Paris Exhibition.

By 1871, Henry Doulton had launched a studio at the Lambeth pottery, and offered work to designers and artists from a local art school. Their names included the Barlow family (Florence, Hannah, and Arthur), Frank Butler, Mark Marshall, Eliza Simmance, and George Tinworth.

1873 John Doulton senior died. By this time, the firm was an established leader in industrial ceramics, and was just entering the field of art pottery.

The revival by Doulton and Co of the salt glaze stoneware that came to be known as Doulton Ware was one of the major triumphs of the firm. From small beginning, the staff of artists and decorators (including such well-known names as George Tinworth and Hannah Barlow) rose to 345 by 1890.

1877/8 Doulton bought a small factory from Pinder, Bourne and Co at Nile Street in Burslem, Stoke-on-Trent, Staffordshire – a facility that handled tableware as well as ornaments and earthenwares. Doulton became increasingly popular, thanks mainly to the artistic direction of John Slater, who worked across a wide variety of figurines, vases, character jugs, and decorative pieces. The company was soon producing bone china at this factory.

1882 The name of the Burslem works was changed from Pinder, Bourne and Co to Doulton and Co Ltd.

1882 A new building was added to the High Street Pottery to cope with the demand for artware, which took numerous medals and prizes. This success was matched by growth in the Staffordshire potteries. The knighthood conferred on Henry Doulton in 1887 was a recognition of his outstanding achievements.

1884 Studio-based success prompted diversification. The business introduced new techniques and produced bone china from 1884. The ideas and inspiration of key individuals like John Slater and Charles J. Noke built its reputation in figurines, vases, and decorative pieces. When Henry died in 1897 he was widely mourned. But the Doulton name for fashion and functionality was spreading apace.

1889 The Lambeth establishment employed c.2000 people and there were another 2000 employees in other parts of the Doulton empire; drain pipe works were also at St Helens and Rowley Regis[6]

1898 Doulton and Co: offer of public shares in the company incorporated to acquire a company of the same name[9]. The growth of the company and the withdrawal of Sir Henry's capital had made this step necessary. The company was incorporated on 1 January 1899; Henry Lewis Doulton, was chairman and managing director, and the other directors were Ronald Duncan Doulton (Henry's nephew), Benjamin Hannen, a builder, and William Turnbull, a partner in a firm of china merchants.

1899 The company was registered on 29 November, to take over the business of Doulton and Co, of the Lambeth Pottery. [10]

1901 The popularity of Doulton products had come to the attention of the Royal Family and the Burslem factory was granted the Royal Warrant by the new King, Edward VII. It was this that enabled the business to adopt new back-stamp and a name that would last: Royal Doulton.

1918 Henry Lewis resigned the managing directorship and the chairmanship in 1925, being succeeded in both positions by his nephew Eric Hooper.

After the first World War, Royal Doulton went on to become synonymous with the finest English china worldwide. That name and reputation continued to grow with flambé ware, titanian ware, and bone china.

1956 The Lambeth factory closed due to new clean air regulations that prevented the production of salt-glaze in the urban environment. Following closure, all work was transferred to The Potteries. The firm's headquarters remained there until 1971. The building was demolished in 1976.

1968 The old established pottery company Mintons was acquired by Doultons[17].

Since then, the business has combined the current three main brands under a shared identity: Royal Doulton, Royal Albert, and Minton.

1980 Doulton, as the industrial subsidiary of Pearsons, acquired Fairey Holdings[22]

2004 All production by the company in the UK ceased. Following Waterford Wedgwood's acquisition of Royal Doulton on 14 January, 2005, Royal Doulton has left its factory in Burslem having established a state-of-the-art production facility in Indonesia.

Late in the 19h century, additional works for the manufacture of metal work of all kinds for sanitary purposes were established at Paisley and Paris. So Doulton and Co were also brass and iron founders, with works in London and Paisley.

1928 Bath manufacturers of London and Paisley; took part in a campaign to ensure foreign imports were marked as such; sales of cast iron baths were unprofitable to UK manufacturers[24]

1937 Manufacturers of general and chemical stoneware, sanitary equipment, etc. The profits of the business had improved considerably; the Paisley works had been closed[25]. Paisley works advertised for sale[26]