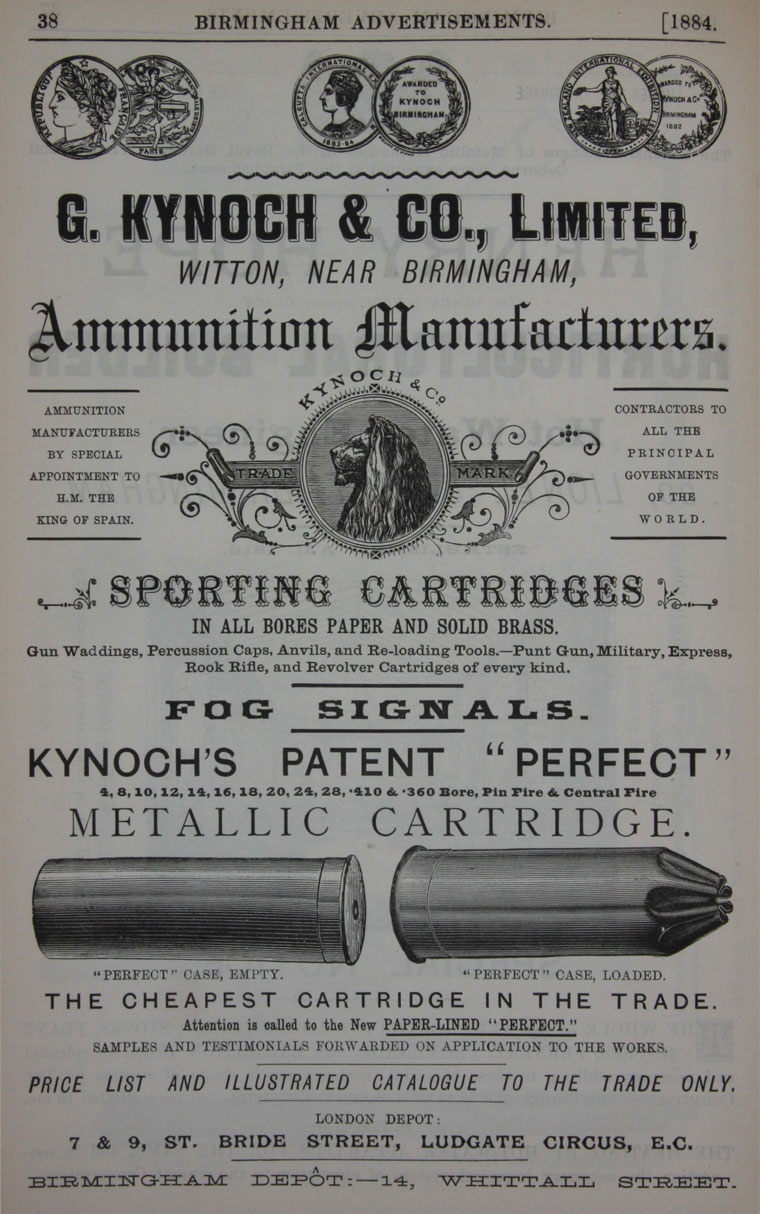 By 1864 The company had obtained contracts for the supply of ammunition to the war department and the Turkish government.

The cartridge made of coiled brass strip and developed by Colonel Boxer, superintendent in the royal laboratory, was giving trouble and the war department wished to replace it.

1868 Kynoch, in partnership with his manager, William Whitehill, filed a patent on 1 April, for improvements in cartridge construction, namely, to make the case of solid drawn brass. The Lion Works, as it became known at Witton, by now comprised large workshops and well-spaced loading sheds.

1870 The fourth explosion at the factory in two years was reported, this one on November 17th killing eight and injuring twenty, including children. On December 9th an even more appalling accident occurred in the neighbouring cartridge factory of Ludlow and Co - possibly a Kynoch licensee - when 17 people were killed instantly and 34 more died later from their injuries; a national outcry ensued.

1870 Kynoch's love of speculation led him into cash flow problems and he sold his rights to the Witton land for £8,000, only to buy them back two years later with 19 acres of freehold land adjoining for £9,000. The firm's rapid expansion in such a hazardous trade was not accompanied by the close attention to safe procedures that it deserved and there were four serious accidents in two years, the last in November 1870.

The manufacture of ammunition, including copper percussion caps for cartridges, continued and by the late 1870s orders for up to 150 million were being handled.

Mr. Kynoch was in difficulty with his creditors, but received assistance from Mr. John Abraham, who entered into partnership with him. Supplemented by Mr. Abraham's capital, the business recovered, grew to very large dimensions, and at one time employed upwards of 3,000 hands.

1882 Second largest ammunition factory in Great Britain on a site of 24 acres, a brass rolling mill elsewhere in Birmingham, a patent lamp business, and a printing office. Daily cartridge capacity was now 400,000 and there are 800 employees. They were about to buy a gun factory and had even bigger plans for the Lion Works factory and also for political and public service - requiring more money and more personal time.

1884 A new company, G. Kynoch and Co, was set up, with six directors and Kynoch as managing director; he was to receive a salary of £500 a year and 10 per cent of the profits. His original company was sold to this organization for £110,000.

1885 The first year's trading profit of the new company was £30,000 but the board required a bank overdraft which one year later stood at £50,000. Ominously, government inspectors rejected a million cartridges and the directors drew Kynoch's attention to defective supervision. In 1886 the profit was marginal: this was converted into a loss in 1887 which was increased fourfold in 1888.

1886 The new company structure was not proving a success and the company was in serious decline.

By 1887 relations between the board and Kynoch were seriously strained and, having obtained an independent report, the directors recorded their opinion that the constant supervision required at Witton was incompatible with the duties of a member of parliament.

1888 The disputes between George Kynoch and the Board come to a head and he was forced to resign. Arthur Chamberlain joined the Board and was appointed Chairman. He would serve for the next 25 years.

Early in 1888, the shareholders became aware of the company's plight and formed a committee of investigation which during the year identified the problems and outlined the remedies, in particular stressing the shortcomings of the managing director. Kynoch was asked to resign which he did by letter ‘owing to the state of my health’. An action in the Court of Queen's bench was necessary to liquidate the debt of £14,000 he owed the company.

1888/9 Two unsuccessful Kynoch enterprises were disposed of: the lamp factory and the gun business. The metal rolling plant in Water Street, owned by George Kynoch, was bought by the company and an option to purchase was obtained on a larger mill in Lodge Road. These moves gave the Company security of metal supply and control over quality. Work was started on a new .303 plant, a Q.F. (quick-firing shell) factory and a fuse-making department. Determined measures were taken to improve quality control. 85 acres of extra land at Witton and Streetly were obtained in order to provide improved magazines and adequate proof ranges. Attempts to change the factory name from Lion Works - too closely associated with George Kynoch - to Witton Ammunition Works were however unsuccessful.

The Company was complimented by H.M. Chief Inspector of Explosives on its safety arrangements. In addition to its military ammunition work the Company was producing half a million sporting cartridges a week.

The Water Street mill was closed and production concentrated at the developing Lodge Road factory; a cupro-nickel casting shop was built at Witton; and a part-time consulting metallurgist was appointed.

A serious dispute halted production and all 3,000 employees joined the strike which had started over the alleged malpractice of a foreman in using apprentices to do the work of skilled toolmakers. Despite this the Company was generally recognised as one which paid well and treated its employees in an enlightened manner.

1893 Kynochs entered the field of high explosive production by purchasing a Yorkshire company, Shortridge and Wright.

1895 New factory was built on a 170 acre site at Arklow on the east coast of Ireland to produce cordite. Very quickly gelignite, dynamite and Kynite were introduced to the product range. A second factory was soon planned, this time on a 750 acre site in Essex, christened "Kynochtown". Glycerine would also be produced at the Lion Works, together with soap and candles (7-8 tons per week) made from the by-products of glycerine manufacture.

A Siemens-Martin steel melting plant was installed at Witton to supply Birmingham manufacturers with a variety of steel castings and to permit the manufacture of shells of various types including armour-piercing. A new Bullet Shop was created. Witton's first rolling mill was laid down together with a casting shop. Its purpose was to satisfy Lion Works's need for the brass required for ammunition production, leaving the Lodge Road factory to concentrate on trade with third parties. The Company was rolling 100 tons of brass a week. There were also plans for setting up plant to make bicycle components.