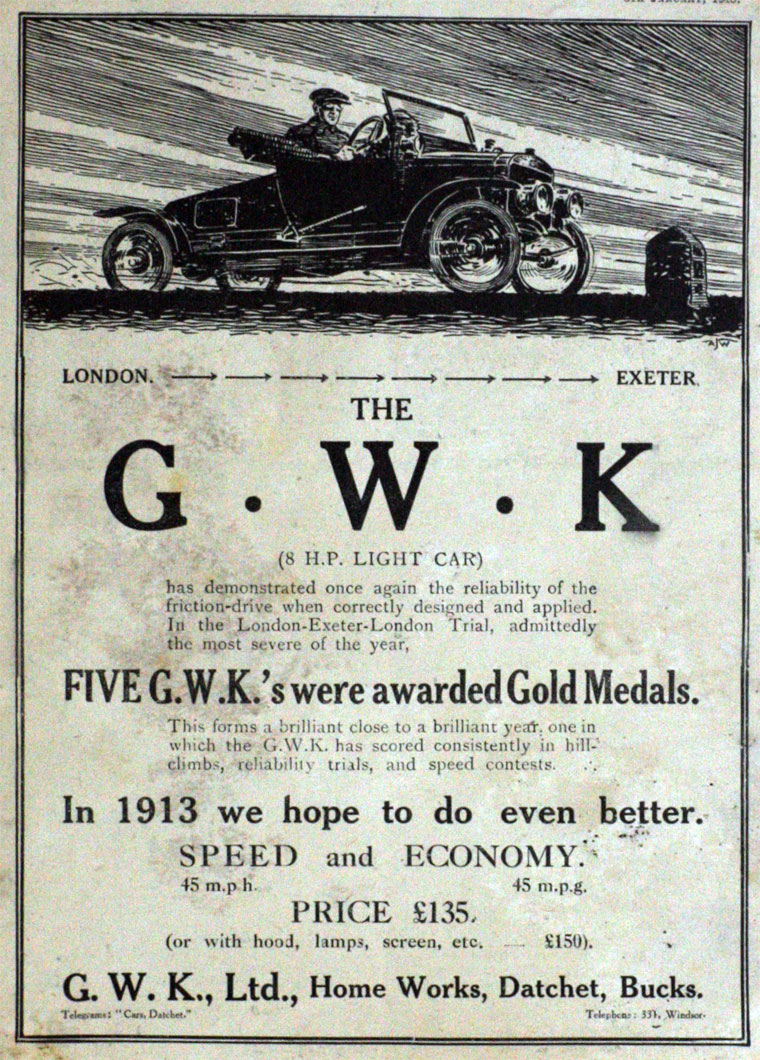 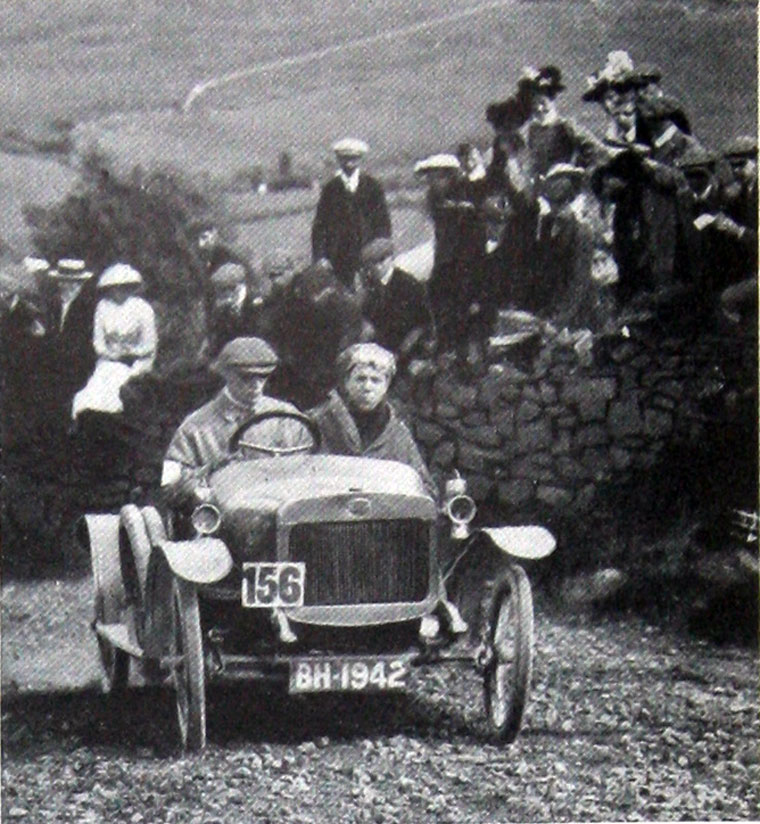 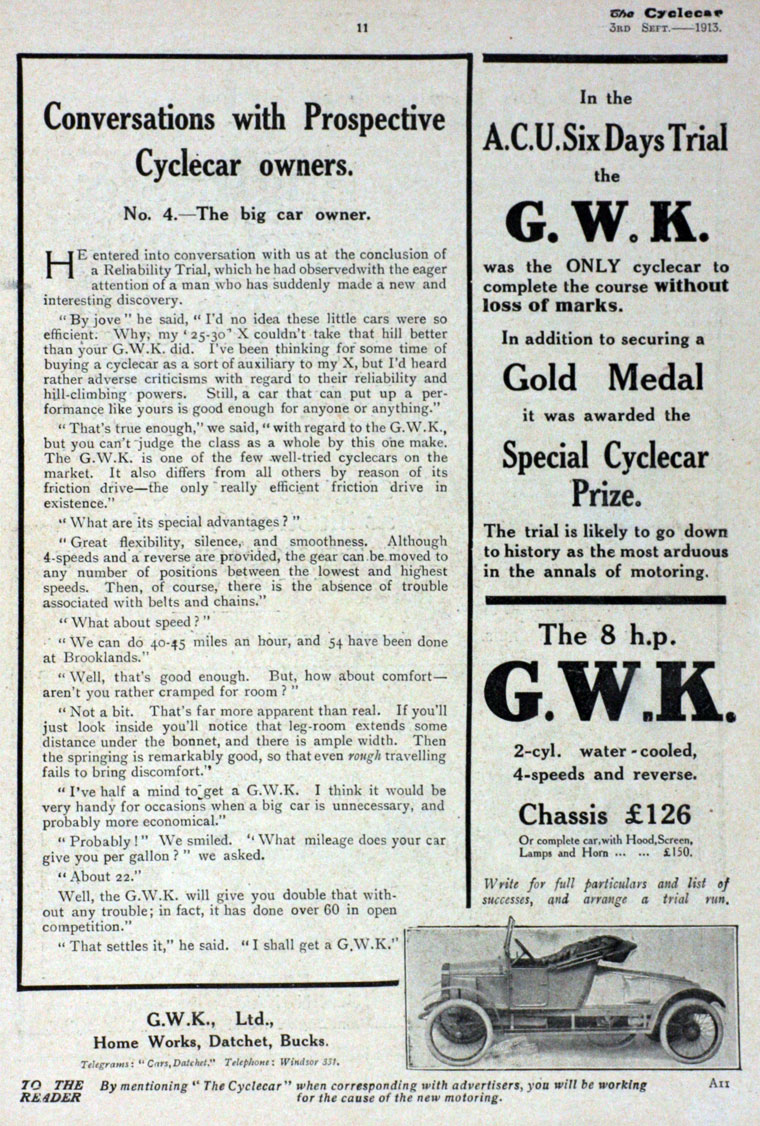 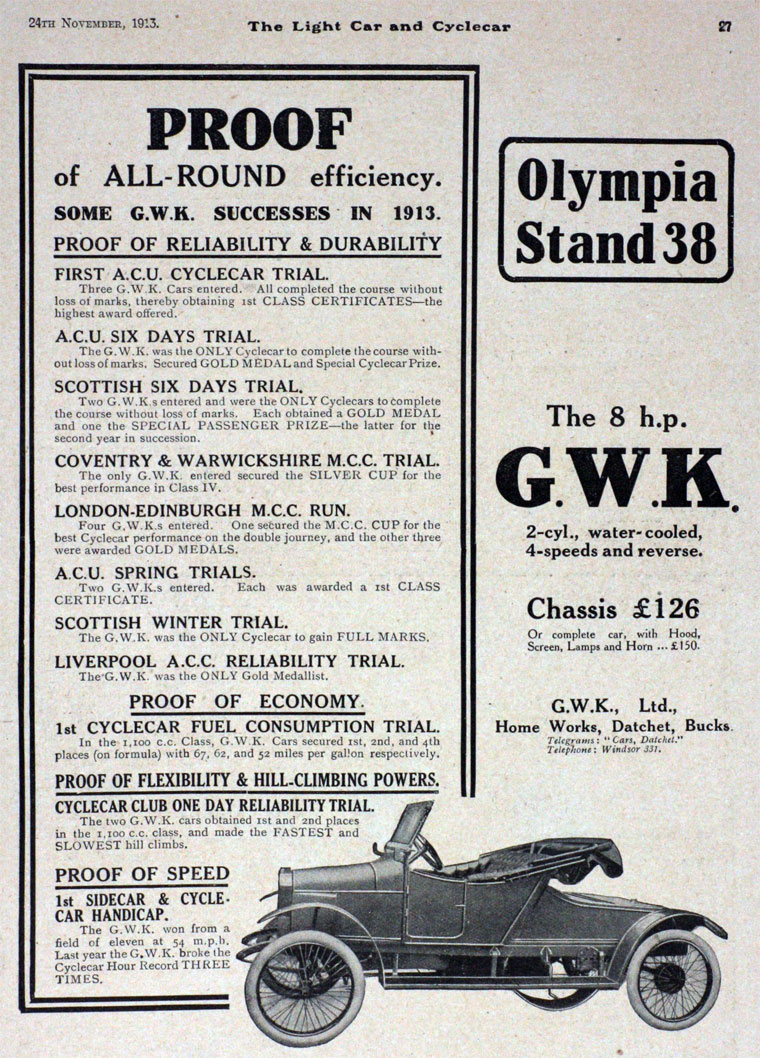 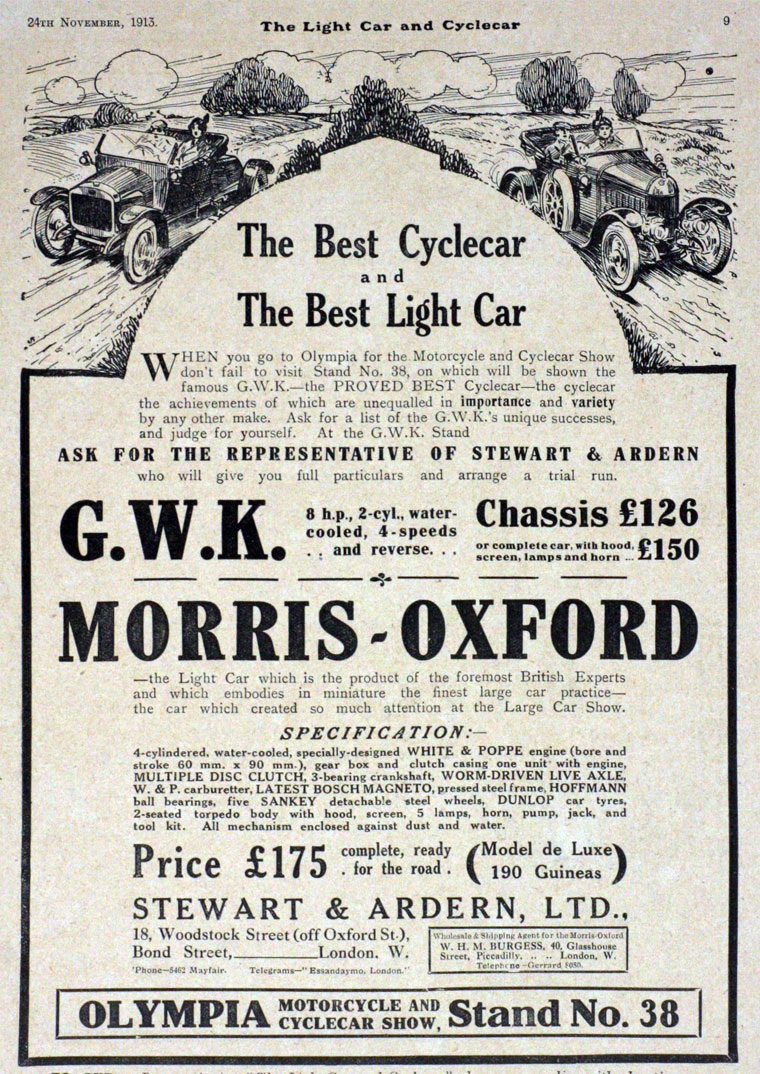 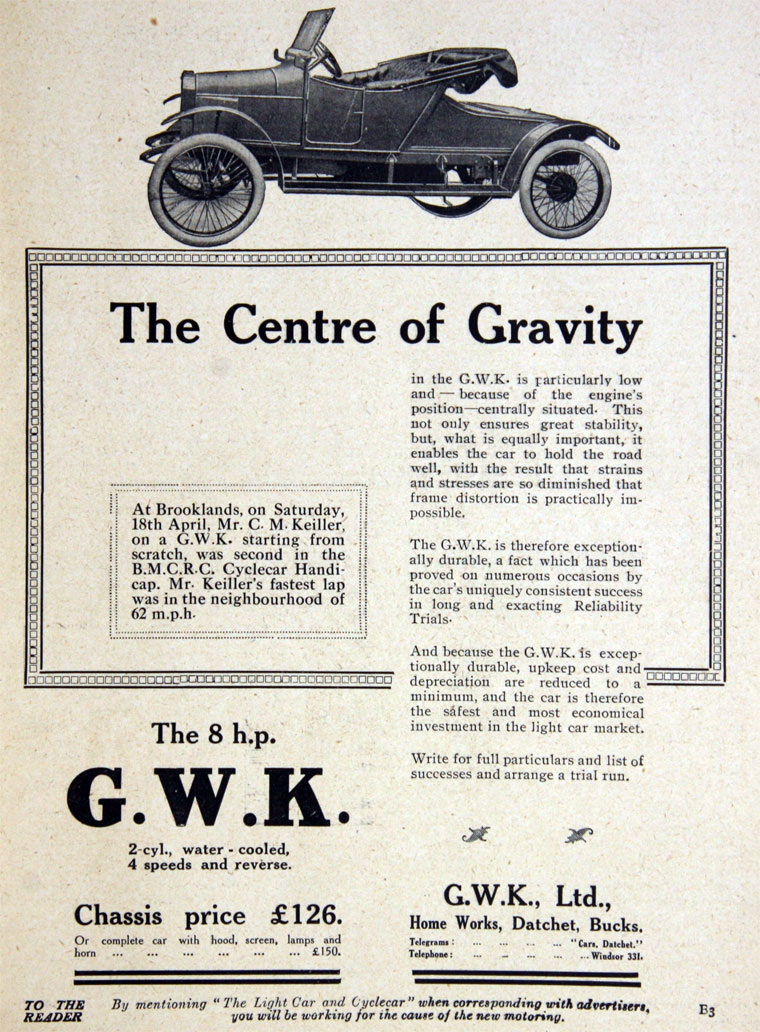 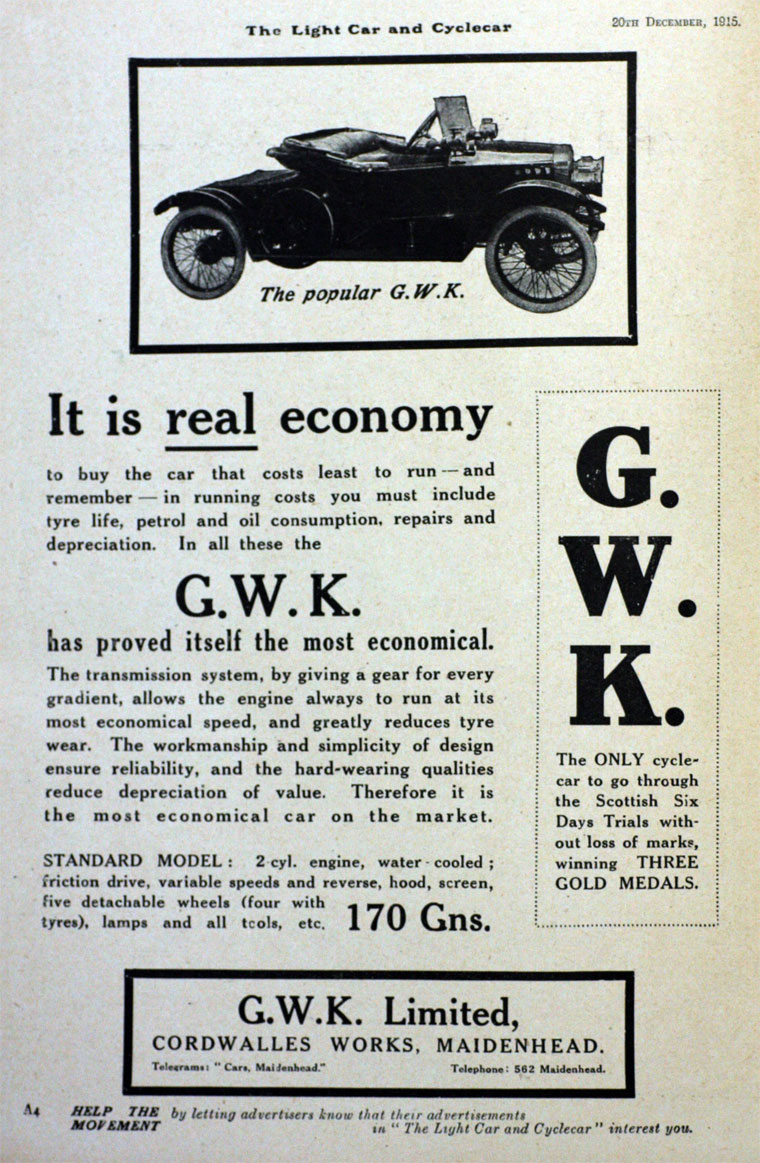 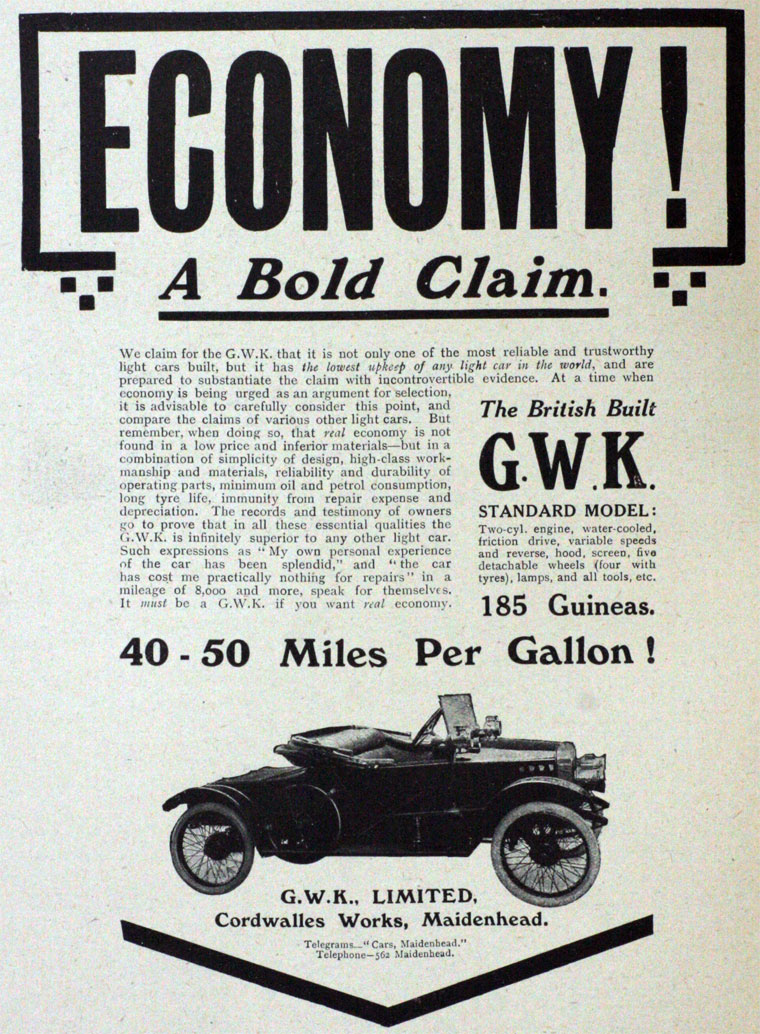 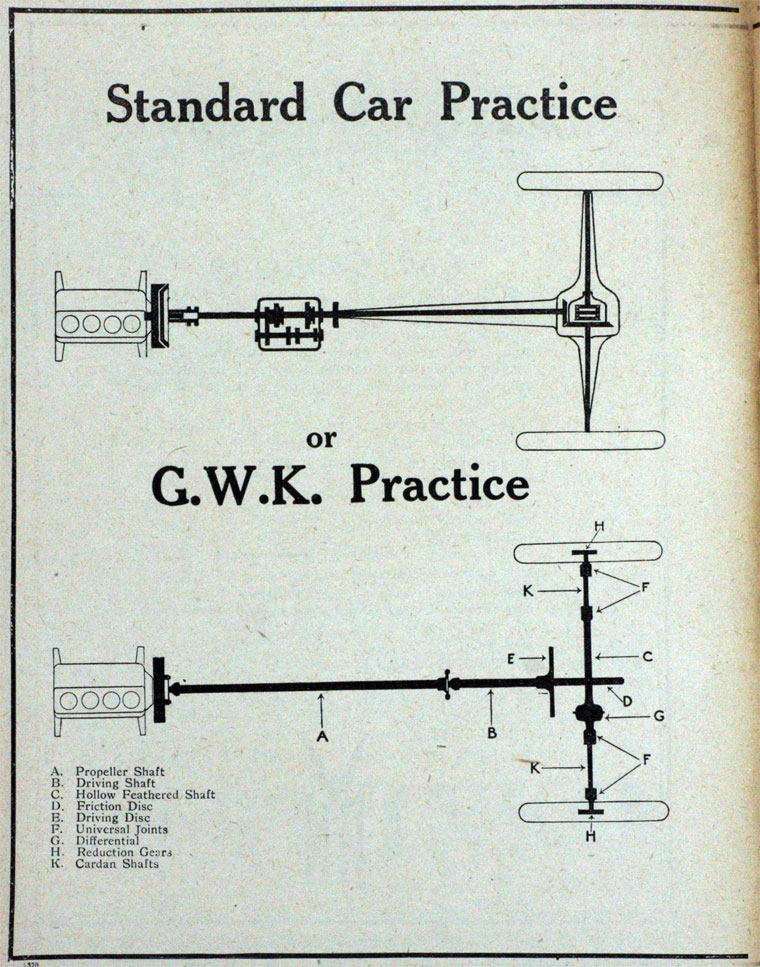 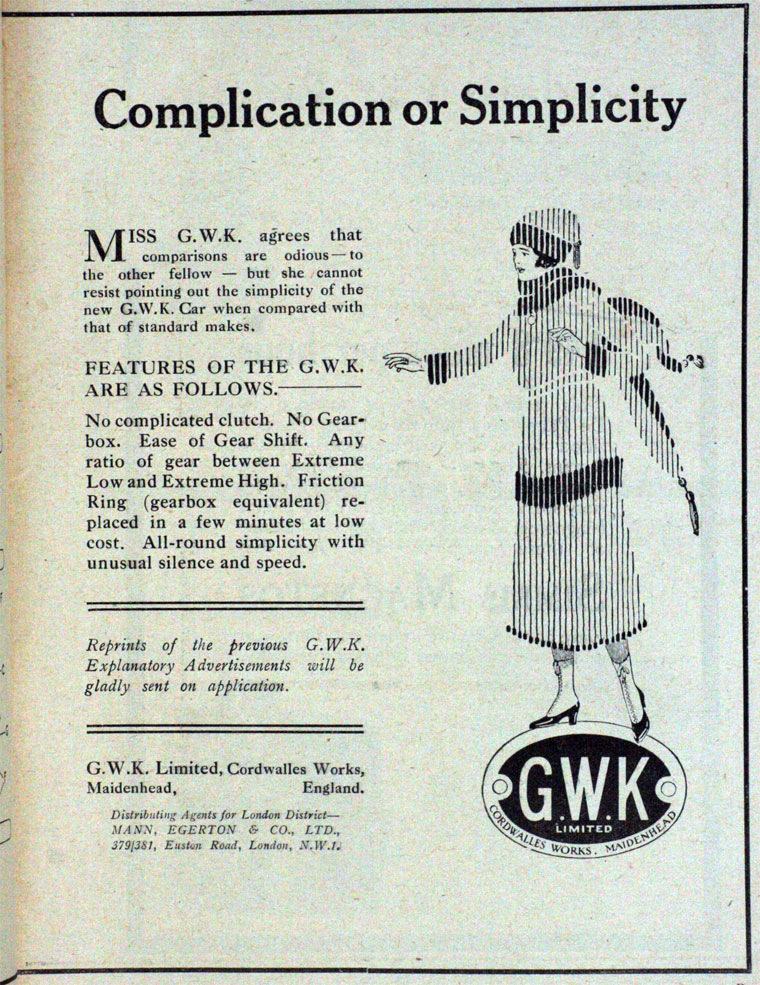 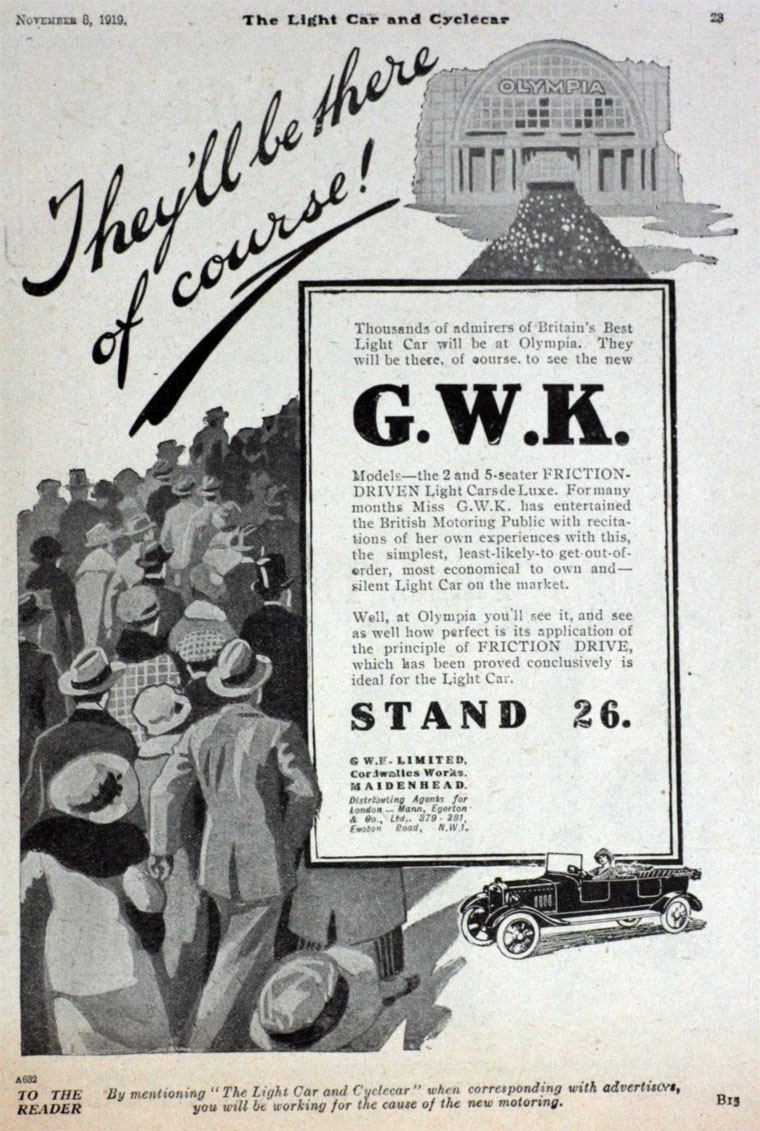 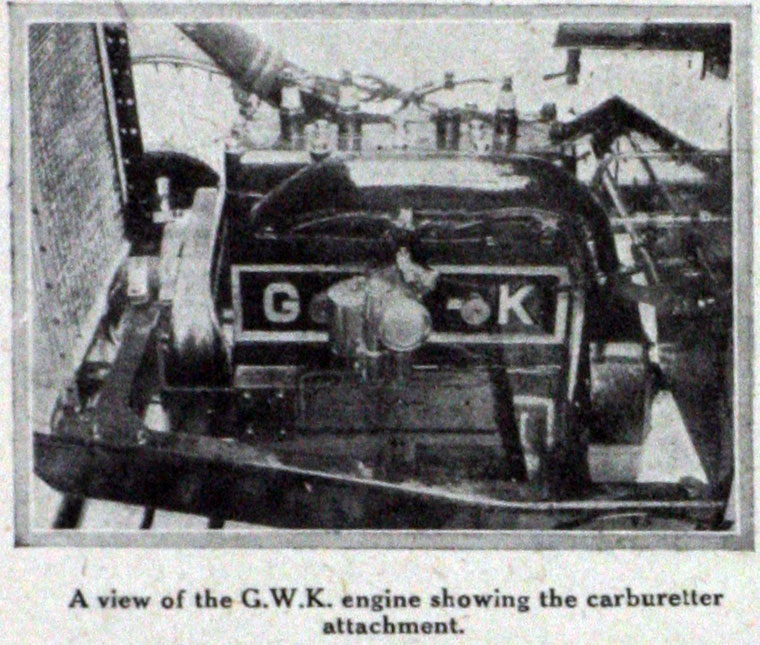 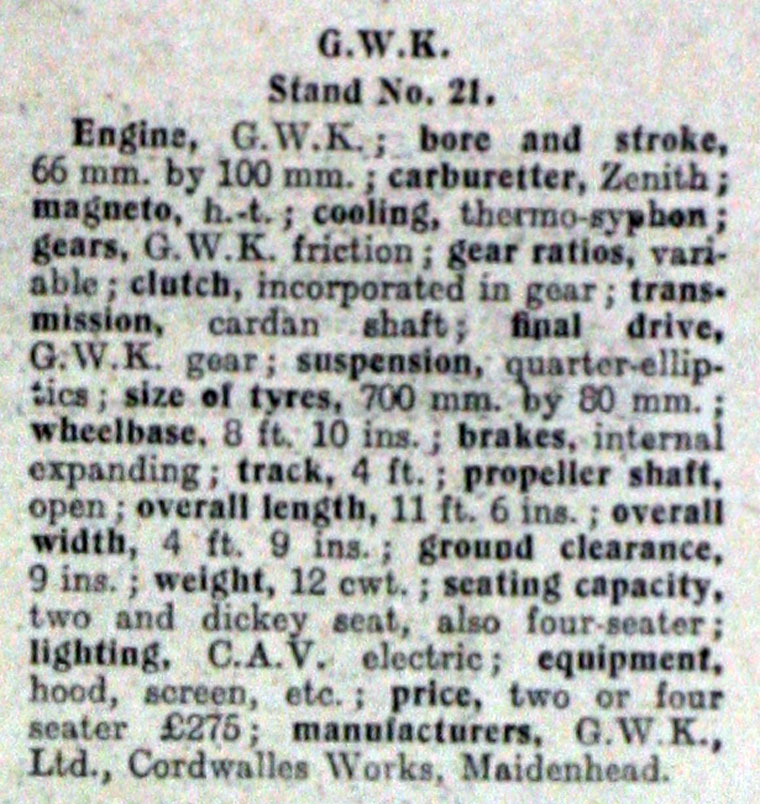 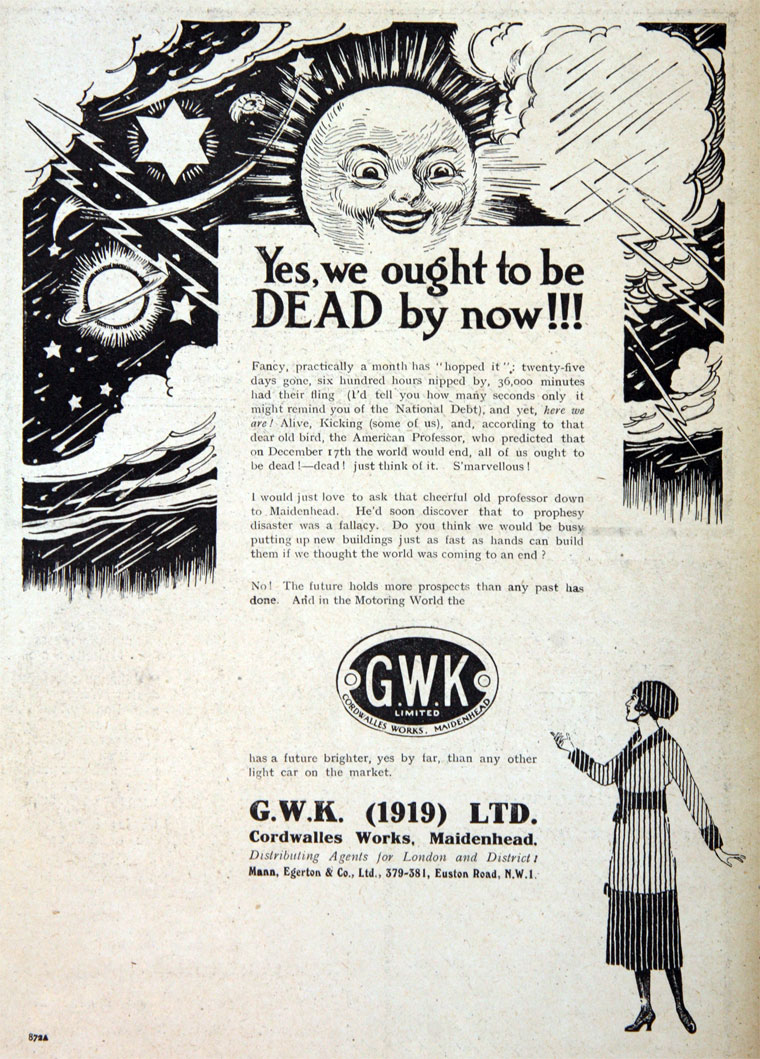 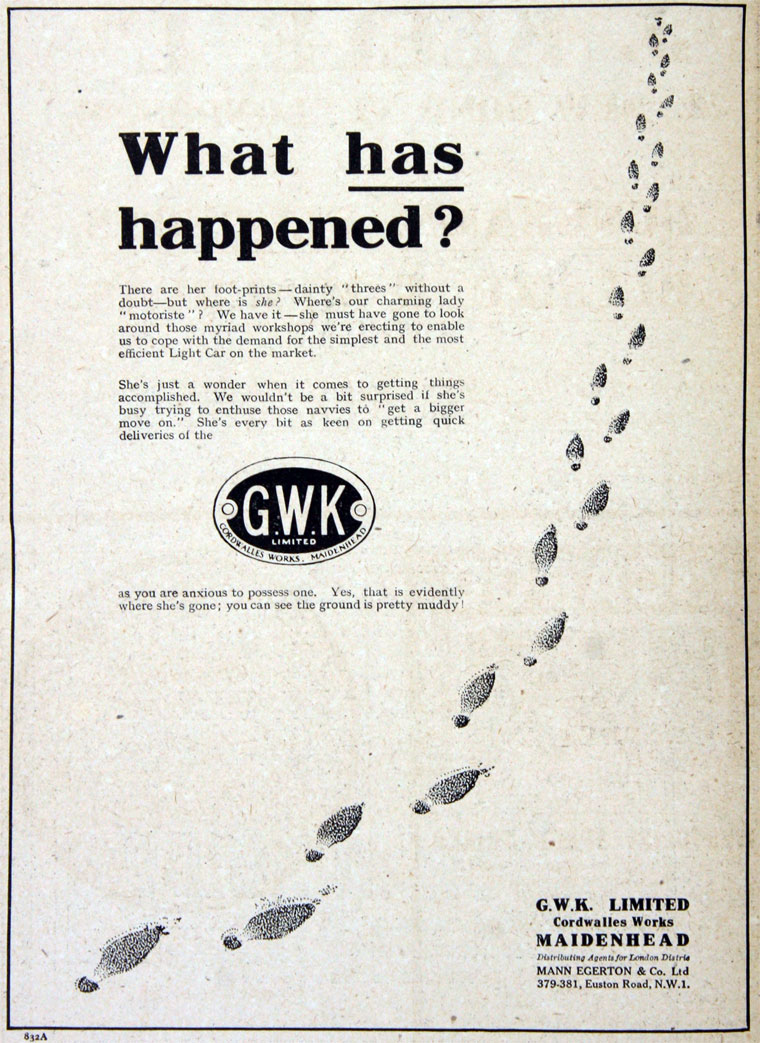 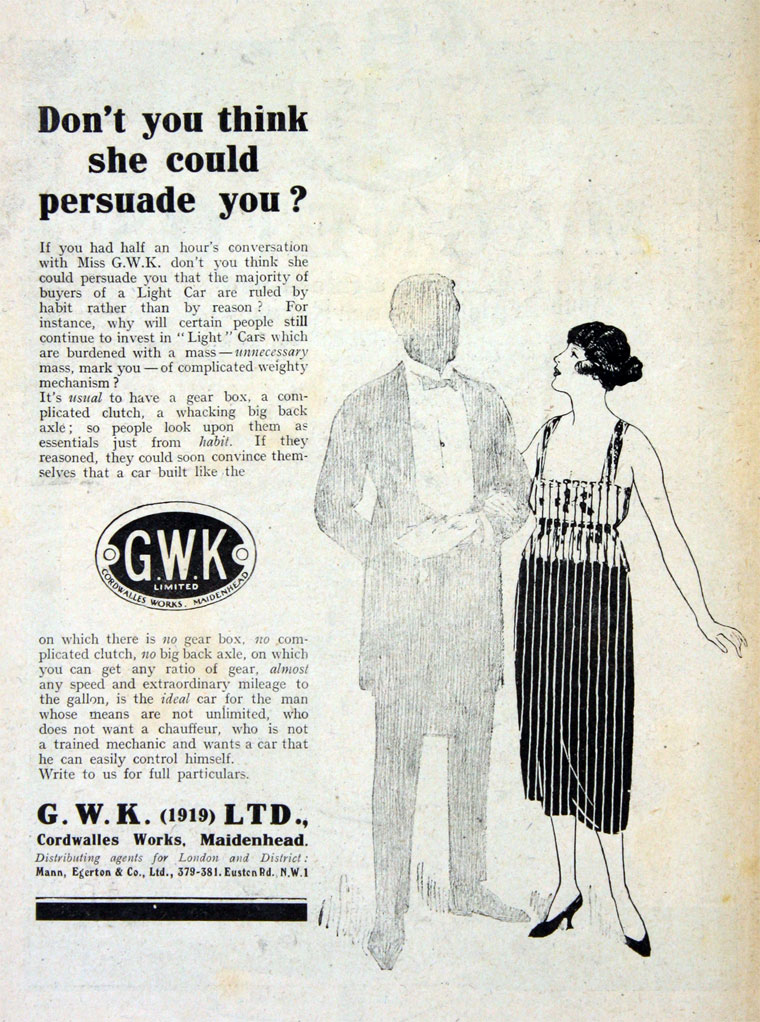 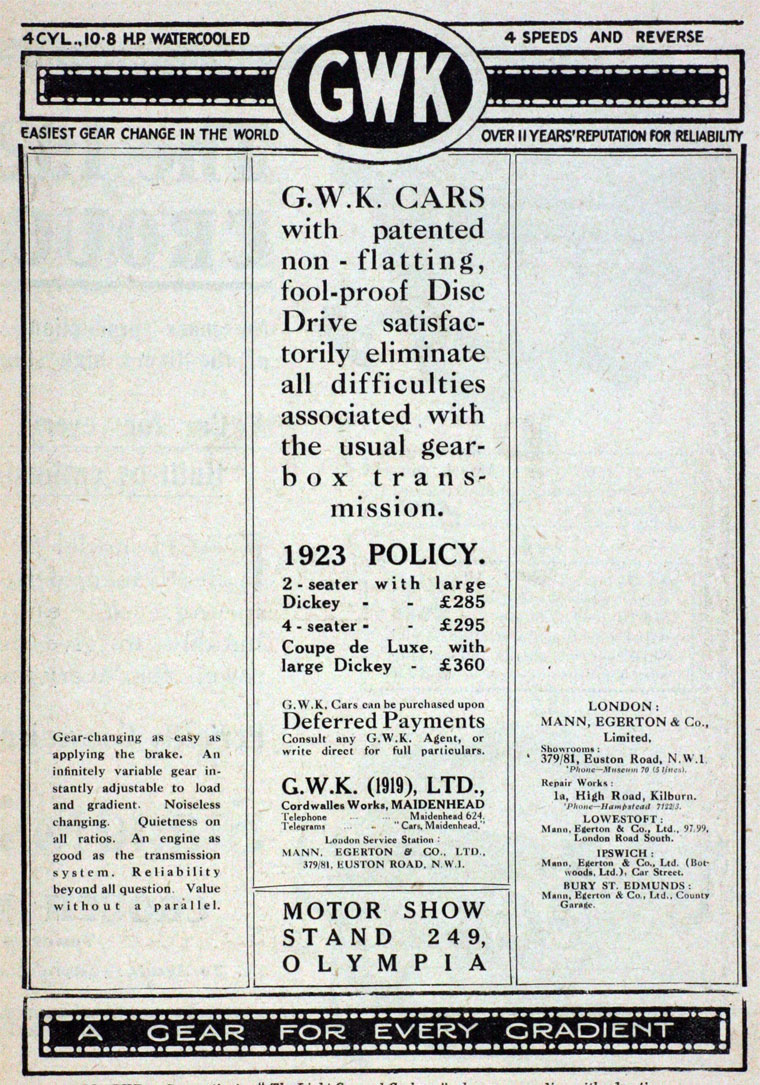 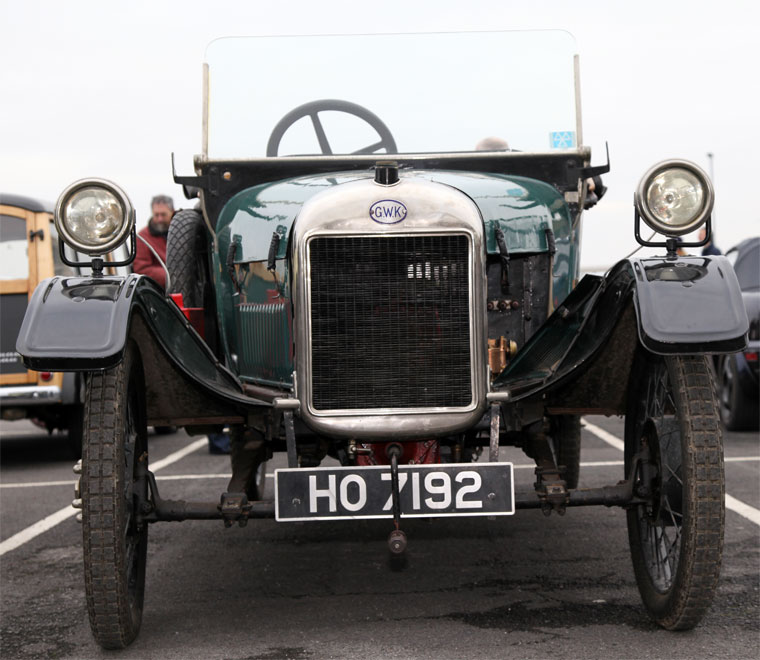 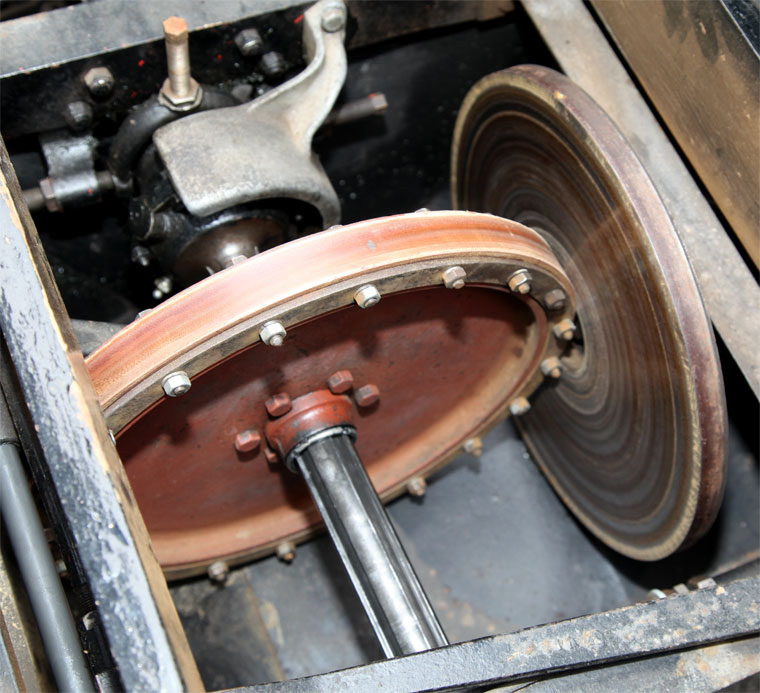 It got its name from its founders, Arthur Grice, J. Talfourd Wood and C. M. Keiller. Wood and Keiller had worked together at the Swindon Works. The cars were unusual in using a friction drive system.

The prototype was made in a stable in Beckenham, Kent, and used a Coventry-Simplex engine, rear mounted. The drive system involved the engine, which was mounted across the chassis, turning a disc on which a wheel could be moved from the periphery to the centre. Top speed was with the driven wheel furthest from the centre and reverse was obtained by moving it past the centre.

1911 The first car was a two-cylinder 8 h.p. friction-driven light car

1912 G.W.K. cars were advertised by distributors Cyril Patterson, Wilberforce and Co of Caterham.

1912 A few examples were sold before the company moved to Datchet, Buckinghamshire

Proper production now started still using a water cooled, Coventry-Simplex twin cylinder engine of 1,045 cc and 1,069 two seat cars were made before the outbreak of World War 1 and a move to war work.

1914 Moved to the larger Cordwalles Works in Maidenhead

WWI During the war the company was run by Grice as his partners were in the army.

GWK's greatest days were before World War 1 and after 1918 financial success eluded them.

Grice left the company in 1920 to start the unsuccessful Unit Car Co leaving Wood and Keiller in charge.

They re-introduced the pre-war model, now called the Type E, and a further 82 were made largely from left over parts. A new model, the Type F was introduced in 1919 and was front engined with a 1,368 cc four cylinder engine, still by Coventry-Simplex, with shaft drive to the friction disc at the rear. It was not a good seller partly because of the noise from the transmission. The Type H overcame most of the drive line problems but suffered from the reputation of its predecessor. About 1,700 of the Types F and H were made between 1919 and 1926.

The company had not given up on the rear-engined idea and a new car, the Type J, appeared in 1922 but only a few were sold. It had a bonnet and radiator very similar to the front engined cars.

They went into temporary liquidation in 1922 and Wood and Keiller left but Grice returned in 1923.

GWK also sold an imported Belgian Imperia car between 1924 and 1928 as the British Imperia. There were plans to build the Imperia at Maidenhead but these came to nothing.

The final car, the type G of 1930 was also rear engined, with the engine behind the rear axle, only a few were made.

1931 The company finally closed with the Cordwallis factory being used by Streamline Cars and later Marendaz Special Cars.