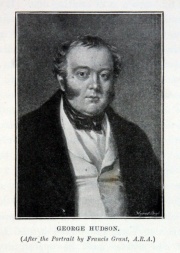 1800 Born in Howsham, in the parish of Scrayingham in the East Riding of Yorkshire, north of Stamford Bridge, east of York. the fifth sona dn seventh of ten children of John Hudson (1756-1808) and his wife Elizabeth Ruston (1768-1807)

1815 Aged 15 it is rumoured that he fled his home village in disgrace after fathering a child but more likely that he went to York to find work.

After a cursory education, at age 15, he was apprenticed to Bell and Nicholson, a firm of drapers in College Street, York.

He finished his time in 1820, was taken on as a tradesman, and given a share in the business.

1821 When Bell retired, the firm became Nicholson and Hudson with George in parnership with Richard Nicholson the brother of Bell's widow Rebecca.

By 1827 the company was the largest drapery in York.

In 1827, his great-uncle Matthew Botrill fell ill and Hudson attended at his bedside. In thanks for this, the old man made a will leaving him his fortune of £30,000.

From being a Methodist and a Dissenter, Hudson changed his allegiance to become a High Church Tory.

In 1833 it became possible for joint stock country banks to conduct their business in the City of London and he took a leading part in the establishment of the York Banking Company with its agent in the city being George Carr Glyn.

He inherited a sum of £30,000 and invested it in North Midland Railway shares, and was shortly afterwards appointed a director.

1837 He was elected Lord Mayor of York. He had for long believed in running a railway to York, and he took an active part in securing the passing of the York and North Midland Railway Bill, and was elected chairman of the new company with the line being opened in 1839. From this time he turned his attention to the proliferation of railways.

In 1841 he initiated the Newcastle and Darlington line. With George Stephenson he planned and carried out the extension of the Midland to Newcastle, and by 1844 had over a thousand miles of railway under his control. In this year the mania for railway speculation was at its height, and no man was more courted than the "railway king". The name was conferred upon him by Sydney Smith.

Despite his personal wealth, he was presented with a tribute of £20,000. Deputy-lieutenant for Durham, and thrice lord mayor of York, he was returned in the Conservative interest for Sunderland in 1845, the event being judged of such public interest that the news was conveyed to London by a special train, which travelled part of the way at the rate of 75 miles an hour.

Full of rewards and honours, he was suddenly ruined by the disclosure of fraud in the Eastern Railway. Sunderland clung to her generous representative till 1859, but on the bursting of the bubble he had lost influence and fortune. His later life was chiefly spent on the continent. Some friends gave him a small annuity a short time before his death, which took place in London.

His name has been used to point the moral of vaulting ambition and unstable fortune, Thomas Carlyle calling him the "big swollen gambler" in one of the Latter-Day Pamphlets.

Hudson House, on the site of former York and North Midland Railway terminus in York, is named after him.

He is buried in Scrayingham.