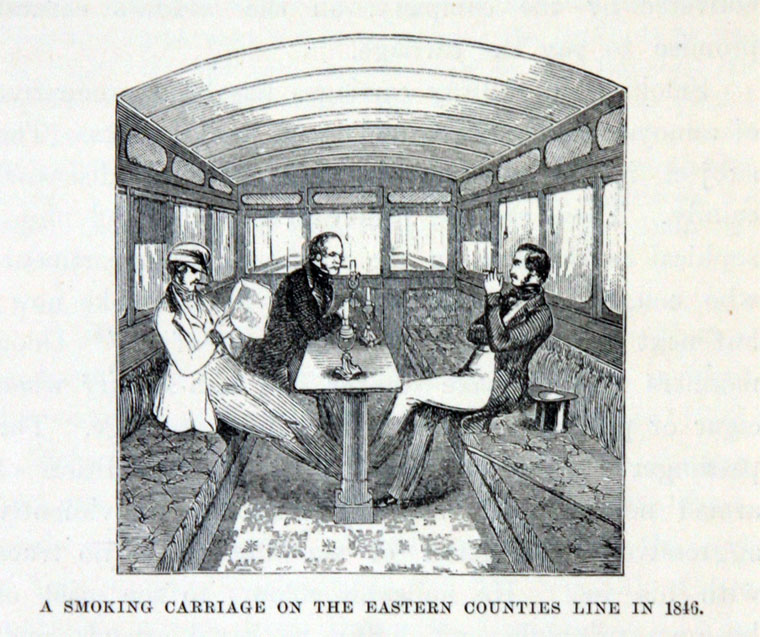 Sanctioned in 1836, the Eastern Counties Railway (ECR) began operating on June 20th, 1839 with a train service from a temporary terminus at Mile End to Romford, and working to a gauge of 5 feet.

The railway was to have run from London to Norwich and Yarmouth but in fact only reached Colchester. It had a temporary station in Devonshire-street, London, whence the portion to Romford was opened on June 28th, 1839.

1840 The terminus at Shoreditch (later renamed Bishopsgate) was brought into use on June 30th, 1840, on which day the line reached Brentwood.[1]

1843 On March 29th, the line reached Chelmsford. The line was subsequently extended to Colchester (51 miles from London).

1844 the Eastern Counties Railway secured a 999-year lease of the Northern and Eastern Railway. At the time the N&ER had reached Bishop's Stortford,

1844 Between September and October the gauge was converted to standard gauge (4 feet 8.5 inches)

1844 Parliament authorised the Eastern Counties Railway to extend to Cambridge and to Brandon in Norfolk where an end on connection with the Norfolk Railway would offer a through route to Norwich. This route opened on 29 July 1845.

c.1849 A committee appointed by the shareholders found evidence of fraud which led to resignation of several directors. George Hudson left, having been found to have enriched himself, whilst starving the line of cash.

c.1851 Joseph Glynn was elected chairman on the retirement of Mr. Betts and held the position for 2 years.[2]

1852 the ECR took over operation of the East Anglian Railway.

1853 the Eastern Union Railway was in serious financial trouble having built lines to Norwich, Bury St Edmunds, Sudbury and was constructing a branch to Harwich. On 1 January 1854 the ECR took over the working of the EUR although this was not formally ratified until the Act of Parliament of 7 August 1854.

1854 Took over the Newmarket Railway, linking Cambridge with Ipswich and Bury St Edmunds.

1854 ECR services had running rights into Fenchurch Street via the London and Blackwall Railway extension route.

1859 Took over the lines of the East Suffolk Railway as soon as these were opened.

1862 Amalgamated with other companies to form the Great Eastern Railway.