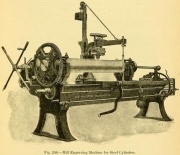 1888 'Death of Alderman George Moulton. — Our obituary to-day records the death of Alderman George Moulton, which took place at his residence, Hall's Crescent, in this city, yesterday. Alderman Moulton was born in Fawcett-street, Ancoats, in 1824, and served his apprenticeship as a mechanic with Mr. Charles Pooley, cotton spinner. He then went to Messrs. Barber's engraving works, and during his engagement there gained his first insight into the engraving business. Mr. Rigby's invention of the pentograph came out at the time, to which the deceased added considerable improvements, for which he obtained a reputation all over the world. His exhibits at the Royal Jubilee Exhibition last year were examined and admired by most of the eminent experts who visited the Exhibition. When a boy he assisted his father (who was a bricklayer) in building German-street Sunday and Day Schools, with which he was intimately connected and supported up to the time of his death. Alderman Moulton was well known for his large-hearted sympathy and benevolence. In all his municipal contests he had the support of the large majority of trade unionists, irrespective of political views, a fact to be attributed to his fair dealing on all occasions with his workpeople, by whom he was much valued. He was chairman of the board of directors of St. Michael's Ward, Sudell-street, Conservative Club, and one of its principal supporters. He leaves two sons and two daughters. Since his wife's death in October, 1884, Mr. Moulton's health has visibly declined, and the business in which he was engaged has been carried on under the superintendence of his eldest son, Mr. William Moulton. The deceased gentleman was first elected a councillor for St. Michael's Ward on Nov. 1st, 1874, and was elevated to the aldermanic bench on December 1st, 1836,and assigned to St. Clement's Ward. He was a member of the Hackney Coach Committee, the Paving, Sewering, and Highways Committee, and the Baths and Washhouses Committee, and had in the past rendered conspicuous service on the Gas Committee. Alderman Moulton was in his 65th year.'[3]