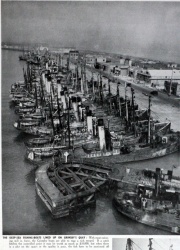 Grimsby Docks were dubbed the "largest fishing port in the world" in the early 20th century.

It owed its prosperity to the ownership by the Great Central Railway (GCR) and its forebear, the Manchester, Sheffield and Lincolnshire Railway (MS&LR).

Coal and timber were also among its biggest cargoes. There were two main docks: the Alexandra Dock (named for Queen Alexandra) and the Royal Dock, the latter completed in 1852. The total area of docks was 104.25 acres (42ha). These docks were linked by the Union Dock

Grimsby Docks railway station serves the town of Grimsby. It is in the north of the town, close to the town's docks. When originally built, the route through Grimsby Docks was double track but this was reduced to a single-track when the section of line between Marsh Junction and Cleethorpes was re-signalled to colour lights operated from Pasture Street signal box. A short passing loop can be seen a few yards towards Pasture Street.

Although the train service through Grimsby Docks has been chiefly passenger trains, a thriving freight service originated from the nearby Fish Docks. Prior to the building of the present Cleethorpes Road viaduct, a complex railway junction and level crossing was situated on the Cleethorpes side of Grimsby Docks station. The loss of the fresh fish traffic from rail to road eventually resulted in the removal of the junction.

The level crossing - being on a major route between Grimsby town a Cleethorpes was the cause for many hold ups on Cleethorpes Road and in the mid-1960s was subsequently removed in favour of a concrete-built road bridge. The bridge itself caused the wholesale demolition of several buildings housing numerous businesses, banks, public houses and a major hotel (run by the parents of actress Patricia Hodge) but by the time of its' completion in 1967 the changes in transportation of fish had made both the bridge and the station redundant.

The town's main railway station is Grimsby Town, located in the town centre.