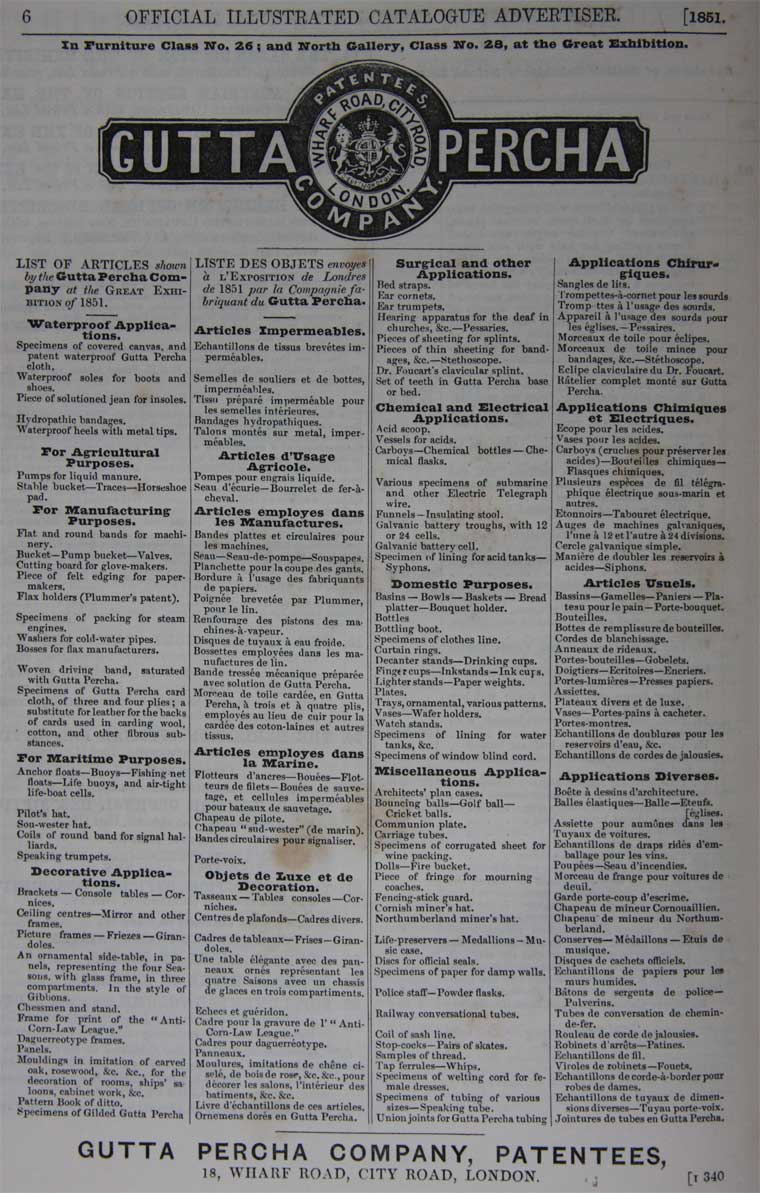 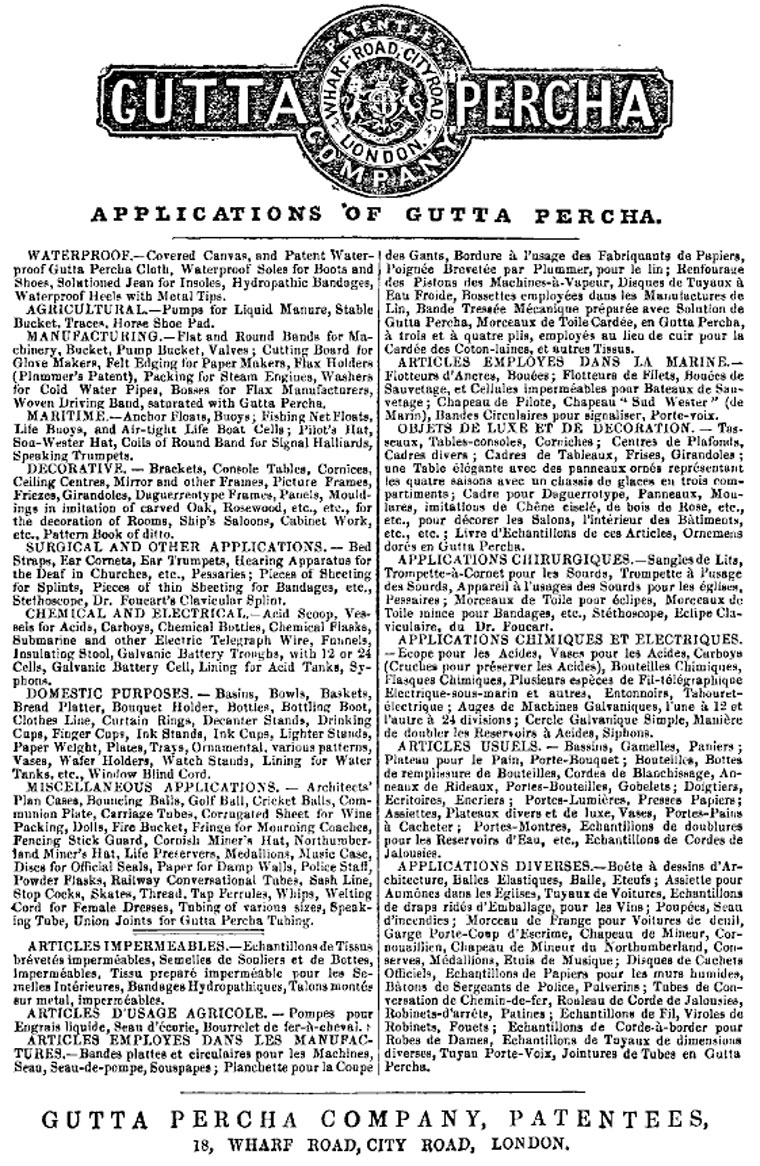 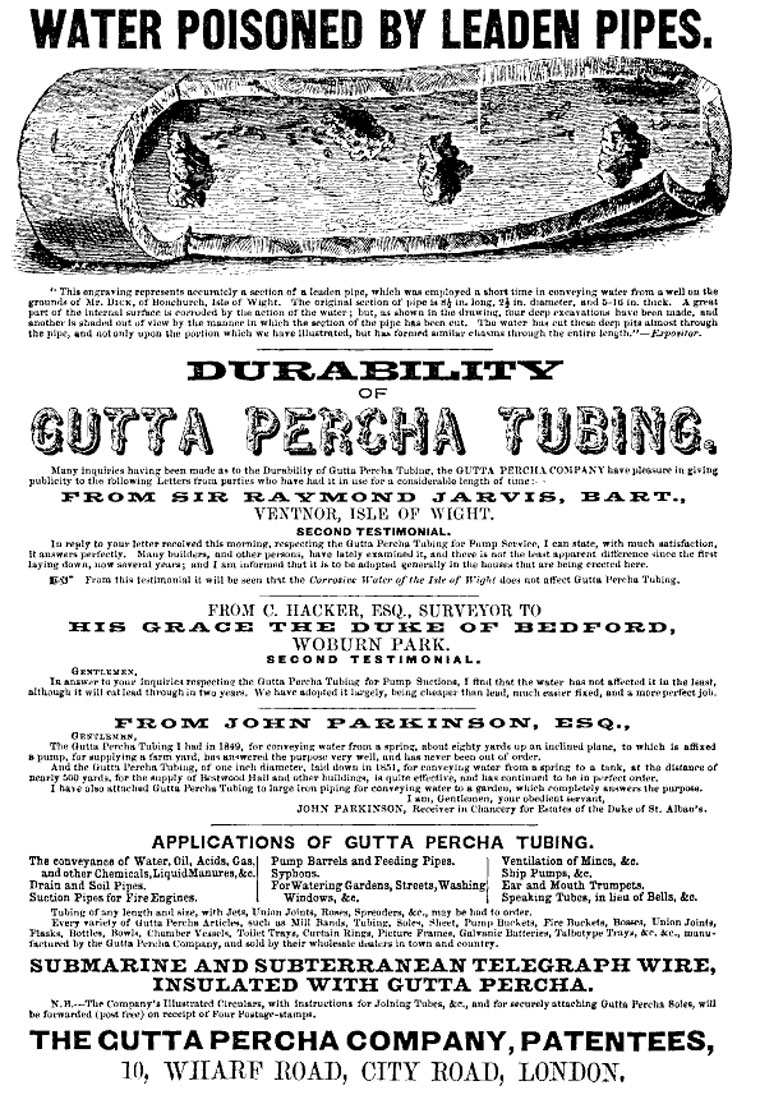 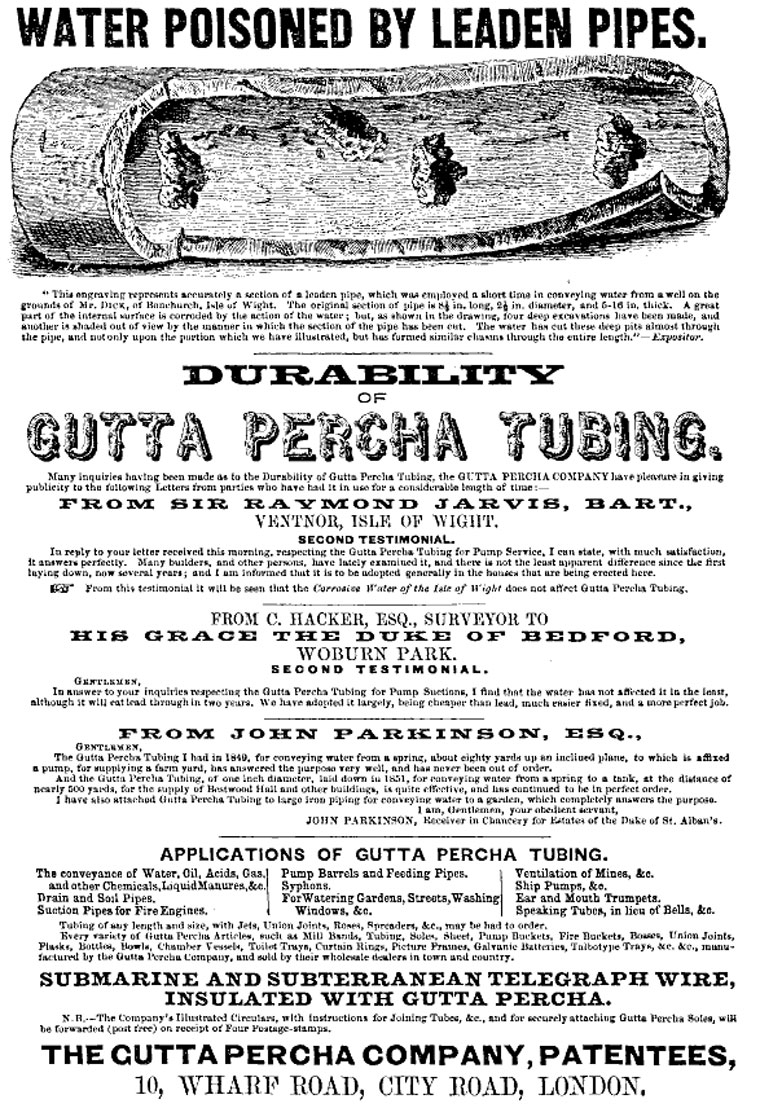 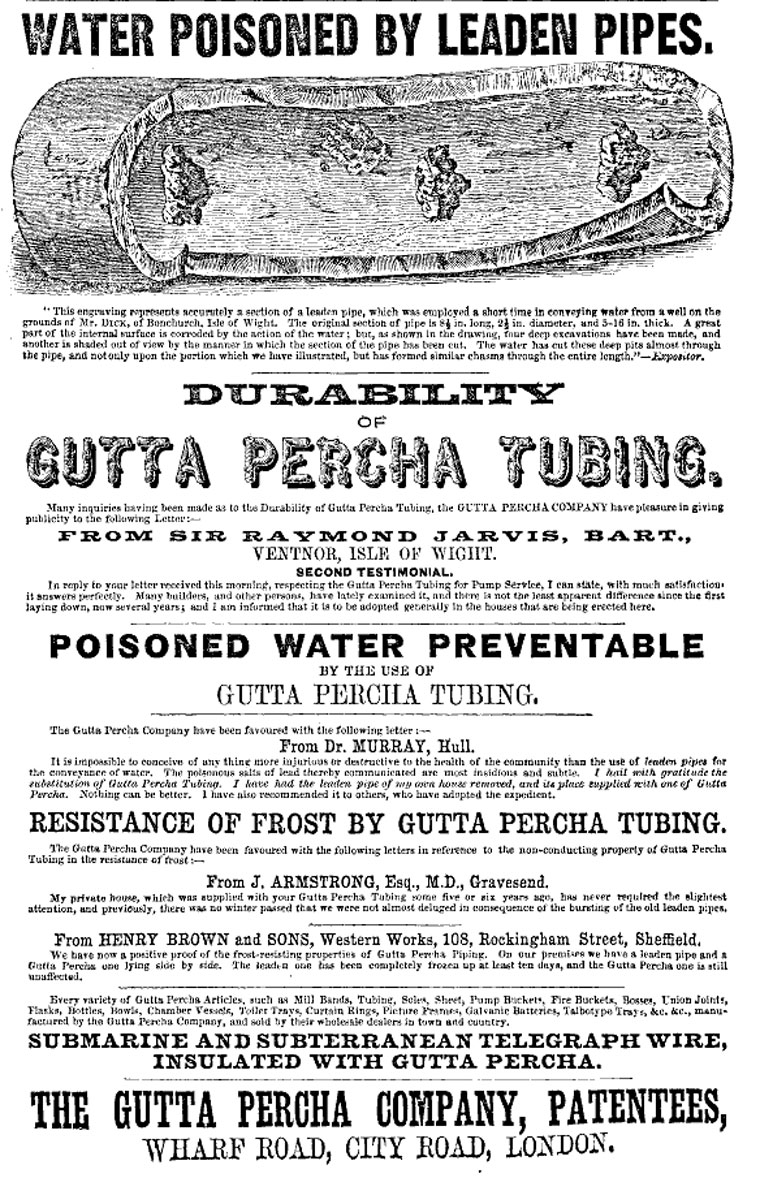 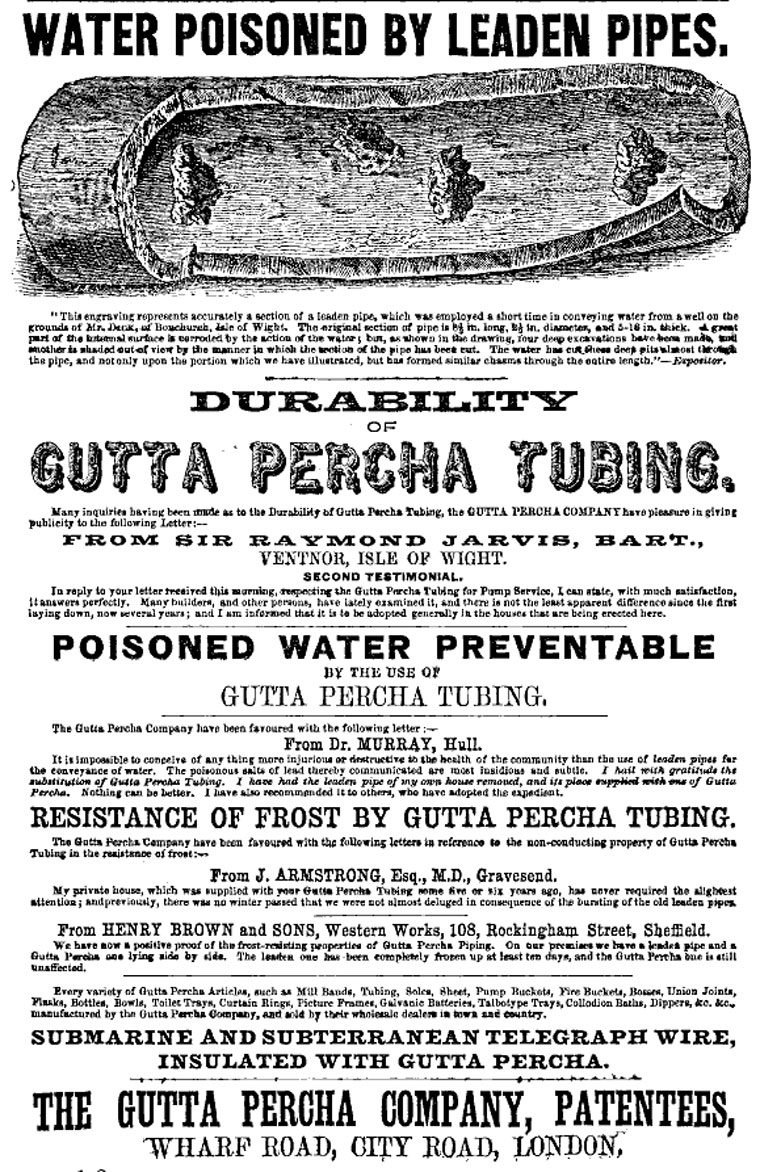 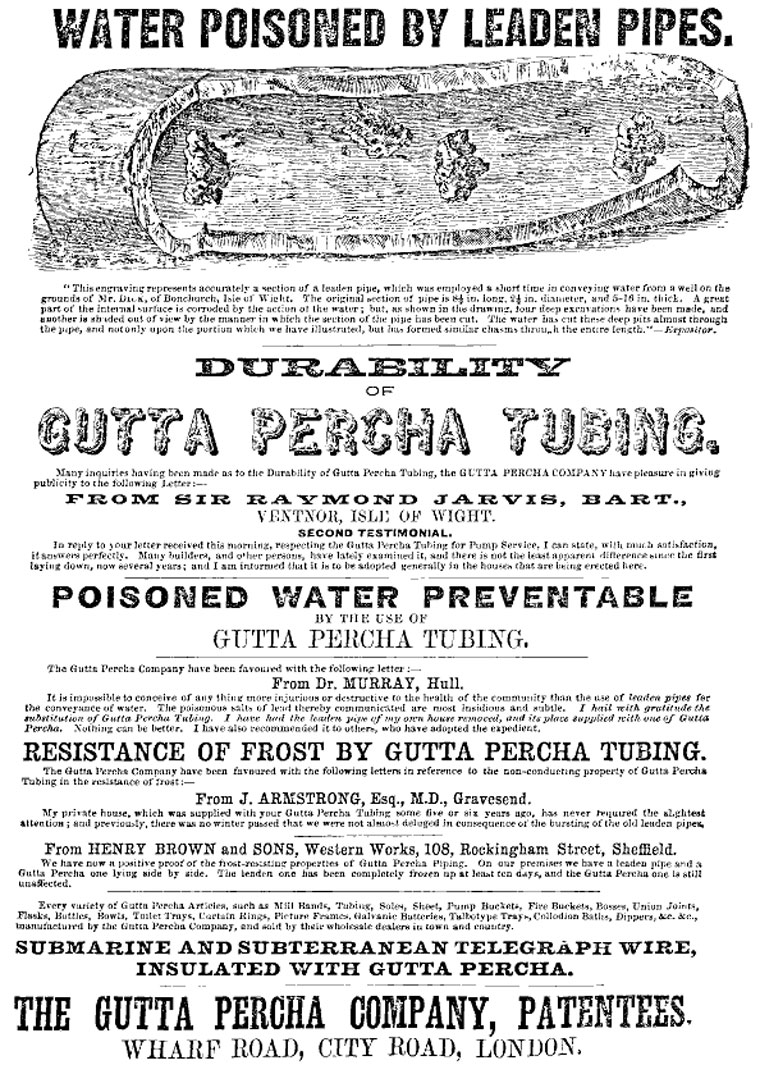 Dr. William Montgomerie was the first to bring gutta percha to England. Amongst those to whom he showed samples were Michael Faraday, who suggested its use as an electrical insulator, and Charles Macintosh, manufacturer of waterproof clothing. A partner of Macintosh, Thomas Hancock, passed samples on to his brother, Charles, who at the time was trying to develop a stopper for bottles, for which he found gutta percha to be ideal.

1841 Charles Hancock patented a stopper made of resin for bottles.

Henry Bewley was a manufacturing chemist in Dublin; he was in partnership, as Bewley and Draper, as a soda water manufacturer. Bewley had already devised several uses for gutta percha as well as a tube-making machine.

1845 Bewley set up the Gutta Percha Co in partnership with Samuel Gurney at works at High Street, Stratford, London. Gurney was a famous city money-dealer and bill-discounter. Both were distant from the running of the company. The company manufactured a long list of resin products including buckets, drinking mugs, life buoys, flasks, washing bowls, siphons, tubing, carboys, jugs, soles for books and shoes, and driving bands for machinery. From its origin one of its principal products was tubing for all varieties of liquids and gases. For the first twenty years, management was in the hands of Samuel Statham [1].

Hancock saw the opportunity offered by the new company for producing his stopper and assigned an exclusive license for its manufacture to Henry Bewley.

1845 Charles Hancock, Henry Bewley, Christopher Nickels and Charles Keene came to an agreement to create a pool account from the proceeds of working several patents that they separately owned relating to resin goods in india-rubber and gutta-percha. Hancock commuted his share in the patent to a salary of £800 a year on a three year contract with the Gutta Percha Co.

Hancock also adapted Bewley's machine for extruding gutta percha tubes to apply gutta percha to wire as insulation. A dispute arose between the two over the machine, leading to Hancock leaving the company.

1848 Walter Hancock established a manufactory at Stratford in 1845 and in the subsequent year more extensive premises were taken in Wharf Road and a company was formed including Ernest Bunsen. At both works several powerful steam engines are employed. About eighty persons are employed in the manufacture of lathe bands and a solution for adhering Gutta Percha soles to boots and shoes. These works are under the management of Walter Hancock and F. Moore. The city establishment is the principal depot where between two and three hundred are employed and the manager is J. Statham of the firm of Statham and Bates of Manchester. The experimental managers are C. Hancock, W. Hancock and Mr. Bewley. The superintendent of the sales department is Joseph Watson (2). [3]

1848 Charles Hancock obtained a patent for "an apparatus for covering or coating wire or cord to an infinite length with any plastic substance". This machine revolutionised the making of telegraph cables, insulating any length of conductor; immediate uses were for underground and underwater electrical cables, all of which were insulated using this machine up until 1863. But by 1848, Hancock had left the company, setting up a rival company in 1850 West Ham Gutta Percha Co; disputes over the rights to Hancock's invention were to occupy the courts for the next 7 years[4].

1848 At City Road, Wharf Road employing 170 men and two steam engines in the basement. Works under the management of Frederick Moore. [5]

By 1850 the Company had moved from Stratford to 18 Wharf Road, City Road, London, where it remained for nearly a century.

1850 The Gutta Percha Co supplied the Submarine Telegraph Co with its normal product, a single wire with gutta percha insulation, for the cross-Channel cable; this was wound on a drum mounted on the deck of a paddle steamer. The cable was laid on 28 August. Contact was successfully made with England via the cable, which satisfied the conditions of the concession. A few hours later the cable failed due to damage by a fisherman.

1857 Mr. Statham organised the gutta percha covering of copper wire which was used to make the cable for the Atlantic telegraph; this was carried out at the Gutta Percha Works[6]

1850s Bewley continued to produce insulated core, supplying it for both the 1850 and 1851 cross-Channel cables for Submarine Telegraph Co. From then on insulated core became the main product of the company.

1864 April 7th. The Gutta Percha Co merged with the telegraphic interests of Glass, Elliot and Co to form the Telegraph Construction and Maintenance Co (Telcon), the contractor for the 1865 and 1866 Atlantic cables.