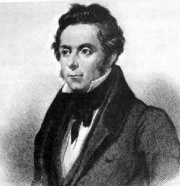 Served an apprenticeship to Cutmore, a watchmaker and jeweller in London

1824 Invented a steam engine in which the ordinary cylinder and piston were replaced by two flexible bags, consisting of several layers of canvas bonded with a rubber solution, and alternately filled with steam

Between 1824 and 1836, Hancock constructed at his Stratford works in East London a number of steam road vehicles, one of these being a three-wheeled four-seater car.

1827 Hancock also patented a steam boiler that would split rather than blow so that the passengers being carried on his steam vehicles would be able to travel in safety.

1829 June. Walter Hancock of Bow has invented a steam carriage and it travels regularly from Fulham to Brompton and carries eight passengers at twelve miles per hour. [1]

In 1829 he built a small ten-seater bus called the Infant, with which in 1831 he began a regular service between Stratford and London. It was powered by an oscillating engine carried on an outrigger behind the back axle. The boiler was vertical and made up of a series of narrow parallel water chambers. A fire was situated beneath the boiler and the fire was fanned by bellows worked by the engine. There was a hopper to feed in the coke.

1831 "The committee have also examined Messers. Summers and Ogle, Mr. Hancock and Mr. Stone whose steam carriages have been in daily use for some months past on common roads . . . Mr. Hancock reckons that with his carriage he could keep up a speed of ten miles per hour, without injury to his machine" [2]

1831 February. Walter Hancock runs a steam carriage from Stratford to Whitechapel called the 'Infant'. He has been working on it for the past three years. The inventor is his brother. [3]

This vehicle was made famous by its later revenue-earning journeys from London to Brighton, which were a British first, and also demonstrated its usability by successfully ascending a frozen slope of 5 degrees where horse-drawn coaches were struggling. The vehicle was ultimately lost in an accident when the driver blocked the safety valve in order to increase the starting pressure and the boiler exploded.

On the 31st of October, 1832, the Infant took an experimental trip to Brighton, which was documented in Mr. Alexander Garden's "Journal of Elemental Locomotion".

1832 November. Report of his journey from London to Brighton in the 'Infant'. [6]

1832 December. Richard Outridge, an engineer in his employment dies when a boiler explodes after he wired down the safety valve. Mentions George Bish the foreman for Hancock. [7]

1833 April Trials of a new steam carriage, the Era, at Paddington. It left from the yard of the Patent Steam Coach Co, Charles Street, City Road. [8]

1833 April 22nd. Hancock’s steam omnibus the Enterprise (built for the London and Paddington Steam Carriage Co) began a regular service between London Wall and Paddington via Islington. It was the first regular steam carriage service, and was the first mechanically propelled vehicle specially designed for omnibus work to be operated. The engine worked on a crank and iron chains applied the power to the back wheels.

The service was brought to an end due to a dispute between Hancock and the operators, and Hancock himself built and operated further steam buses between 1833 and 1840.

1833 Introduced the Autopsy a smaller vehicle.

1833 September. John Haines, a corn and hay dealer, in court charged with obstructing the 'Autopsy' on the 23rd of August in Whitechapel High Street [9]

1833 September. After six years of experimentation he offers his steam carriages to the public [11]

1836 Introduced the 22-seat 'Automaton', a 22-seater powered by a two-cylinder engine with a bore of 9in. and a stroke of 12in and rated at 24hp at 70 RPM. It proceeded to run over 700 journeys between London and Paddington, London and Islington, and Moorgate and Stratford, carrying over 12,000 passengers in total and regularly travelling at speeds in excess of 20 mph.

By 1840, however, the development of steam-powered road vehicles had lost impetus and the heavy road tolls imposed by the Turnpike Acts had turned inventors away from steam. Hancock was forced to give up the struggle, and the way was left clear for the operators of horse buses.

1840 Hancock continued working with steam and supplied a light engine (similar to his steam road coaches) to the Eastern Counties Railway. The boiler consisted of separate chambers which greatly reduced the risk of explosion.

1841 Article mentions Walter Hancock of the Steam Carriage Works, Stratford, Essex and his efforts to introduce steam carriages on the road. [21]

1842 Proposes a submarine cable from England to France for the telegraph. Consists of seven wires covered with gutta percha [22]

1843 Patent for cutting rubber into sheets, and for a method of preparing rubber solutions [23]

1844 Bankrupt '...Walter Hancock, of High-street, Stratford, Essex, Civil Engineer and Patentee for Steam Carriages, now out of business, having been filed in the Court of Bankruptcy,...'[24]

1849 March 'An old workhouse at West Ham has been taken by Messrs. Walter, Hancock and Co as a gutta percha manufactory' [32]

1852 May 14th. Announcement of his death after an attack of Gout, at his home in West Ham Lane. Inventor of steam locomotives for common roads and lately involved with the Gutta Percha Manufactory at Stratford now carried on by his brother. [33] [34]