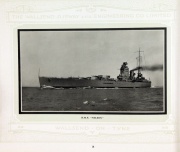 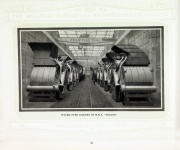 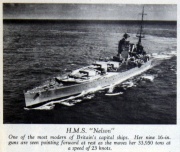 HMS Nelson (pennant number 28) was one of two Nelson-class battleships built for the Royal Navy between the two World Wars. She was named in honour of Horatio Nelson, 1st Viscount Nelson the victor at the Battle of Trafalgar. The Nelsons were unique in British battleship construction, being the only ships to carry a main armament of 16-inch (406 mm) guns, and the only ones to carry all the main armament forward of the superstructure. These were a result of the limitations of the Washington Naval Treaty. [1]

1926 HMS Nelson being fitted out at Armstrong Whitworth's yard on the Tyne with a good prospect of her being commissioned before the close of the current financial year and should be ready for trials during the coming winter.[2]

1927 HMS Nelson - described now as "Britain's most powerful battleship" was completed by Armstrong Whitworth and left the Tyne on Friday 22nd April 1927 for trials and docking at Portsmouth.[3] She was under the command of Captain the Hon. M. R. Best, who was relieved on July 1st be Captain S. J. Meyrick. As the keel of the Nelson was laid in December, 1922, her construction will have occupied four and a half years. Progress was delayed from time to time by industrial disputes, notably by the boilermakers' lock-out in 1923 and the coal stoppage last year. [4]

In 1949 she was scrapped after being decommissioned soon after the end of the war.