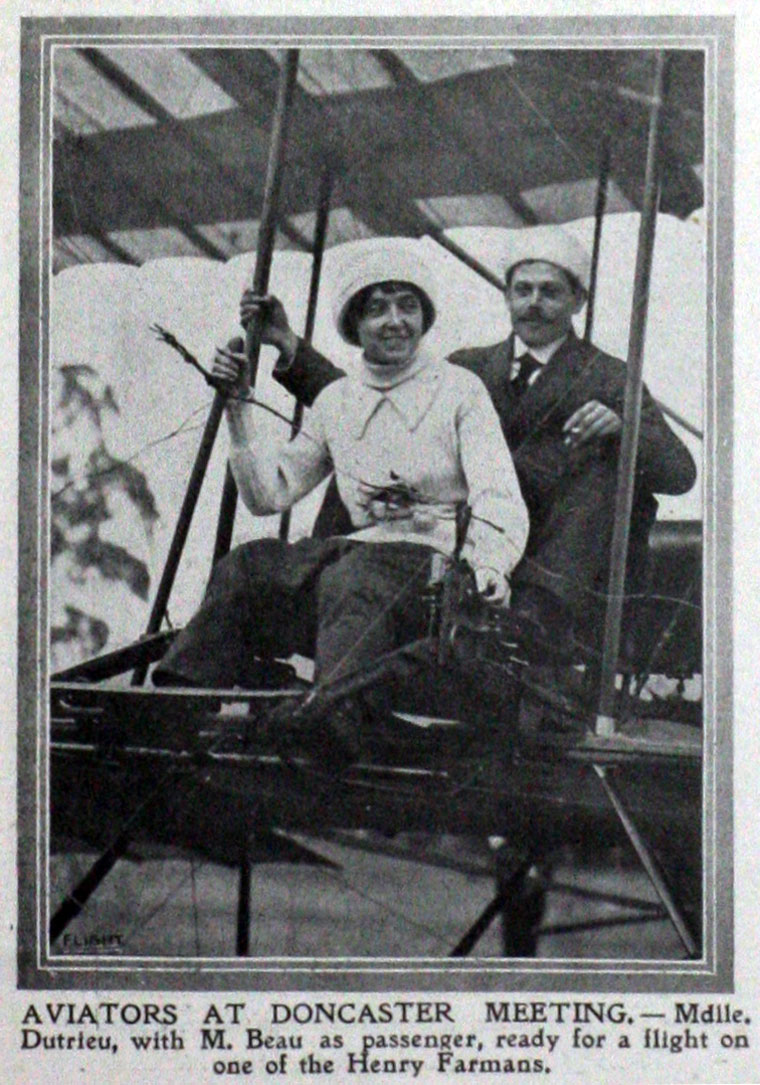 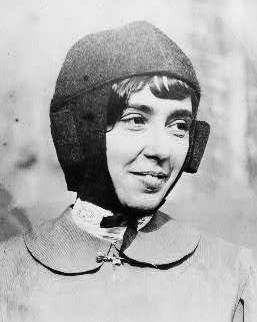 Hélène Dutrieu was born on 10 July 1877 in Tournai, Belgium, the daughter of a Belgian Army officer. She left school at the age of 14 to earn a living.

Dutrieu became a professional track cyclist racing for the Simpson Lever Chain team. In 1895 she gained the women's world record for distance cycled in one hour.

In 1897 and 1898 she won the women's speed track cycling world championship in Ostend, Belgium, and earned the nickname "La Flèche Humaine" ("The Human Arrow").

In August 1898 she won the Grand Prix d’Europe (Grand Prix of Europe) and in November of that year she won the Course de 12 Jours (12-day race) in London, England. Leopold II of Belgium awarded Dutrieu the Cross of St André with diamonds in honour of her cycling success.

She later began performing in variety shows as a cycling speciality act and in July 1903 she cycled a loop inside a vertical track at the Eldorado in Marseille, France.

In September 1903 she appeared at Olympia, London. She became a successful stunt cyclist, a motorcycle stunt rider, an automobile racer and stunt driver.

In 1908 Dutrieu was asked by the Clement-Bayard factory, in France, to be the first pilot of its new ultralight aeroplane, the Santos-Dumont designed no.19 Demoiselle (Young Lady) monoplane. She crashed on take off during her first flight and the aeroplane was wrecked. She later successfully piloted and flew solo in an aeroplane.

On 19 April 1910 she reputedly became the first woman pilot to fly with a passenger. On 25 November 1910 Dutrieu became the fourth woman in the world, and the first Belgian woman, licensed as an aeroplane pilot, receiving Aéro-Club de Belgique (Aero Club of Belgium) licence #27.

Her appearances at air shows earned her the nickname the "Girl Hawk". There was a minor scandal early in her aviation career when it was revealed to the press that she did not wear a corset while flying. In September 1910 Dutrieu flew non-stop from Ostend to Bruges, Belgium. From 26 September to 1 October she flew, frequently carrying passengers, at the aviation week in Burton-upon-Trent, England.

She was the first woman pilot to stay airborne for more than an hour and on 21 December 1910 she became the first winner of the Coupe Femina (Femina Cup) for a non-stop flight of 167km in 2 hours 35 minutes.

In 1911 she regained the Coupe Femina temporarily with a flight of 254km in 2 hours 58 minutes but that year's cup was eventually won by Marie Marvingt.

In September 1911 Dutrieu travelled to the United States with her Henry Farman type III biplane. She competed for the women's altitude record and the Rodman-Wanamaker trophy, subsequently won by Matilde Moisant, at the Nassau Boulevard airfield meeting in Garden City, New York. In the same year Dutrieu beat 14 male pilots to win the Coppa del Re (King's Cup) in Florence, Italy.

In 1912 she reputedly became the first woman to pilot a seaplane. Later the same year she won a prize in competition against four other seaplane pilots, including Rene Caudron, at Ouchy-Lausanne, Switzerland.

During World War I Dutrieu became an ambulance driver. Général Février put her in charge of the ambulances at Messimi Hospital. She later became the director of Campagne à Val-de Grâce military hospital.

After the war she became a journalist.

In 1922 she married Pierre Mortier and took French nationality. She later became vice president of the women’s section of the Aero Club de France.

In 1953 she was awarded the Médaille de l'Aéronautique (French Medal for Aeronautics).