Hennet, Spink and Else 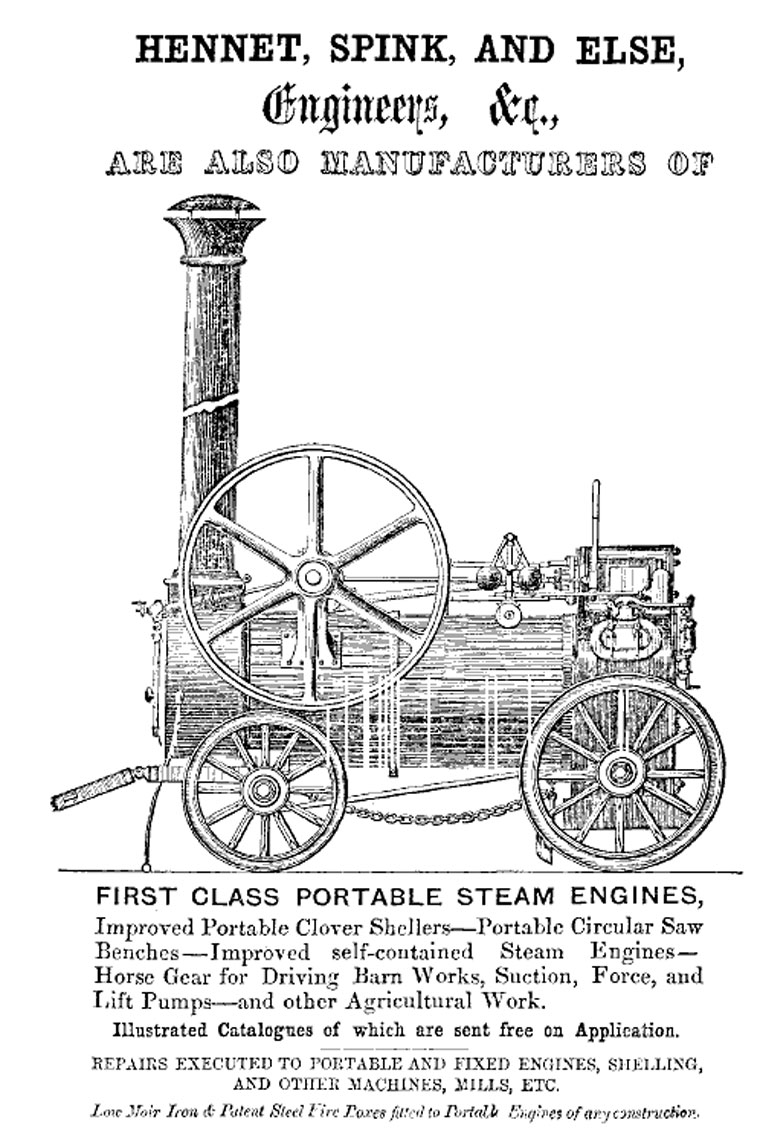 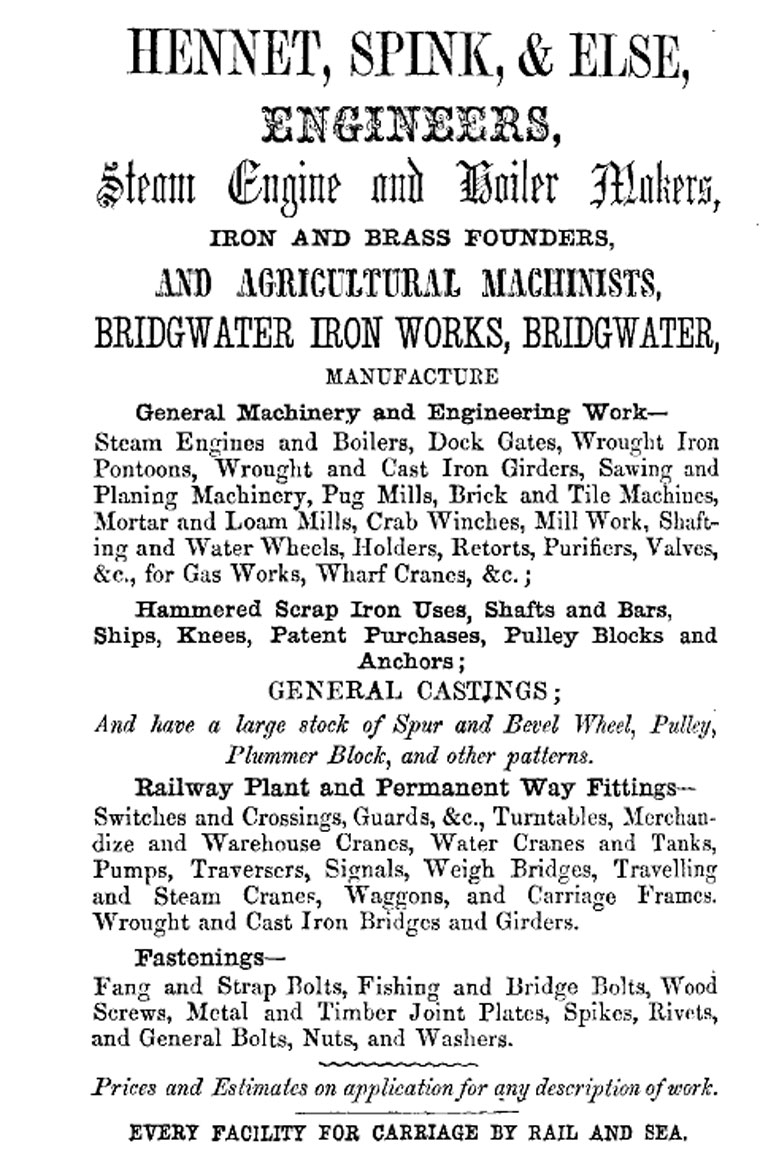 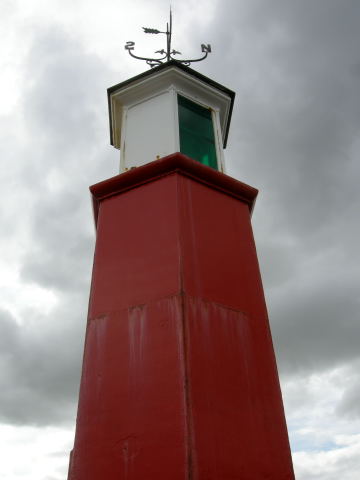 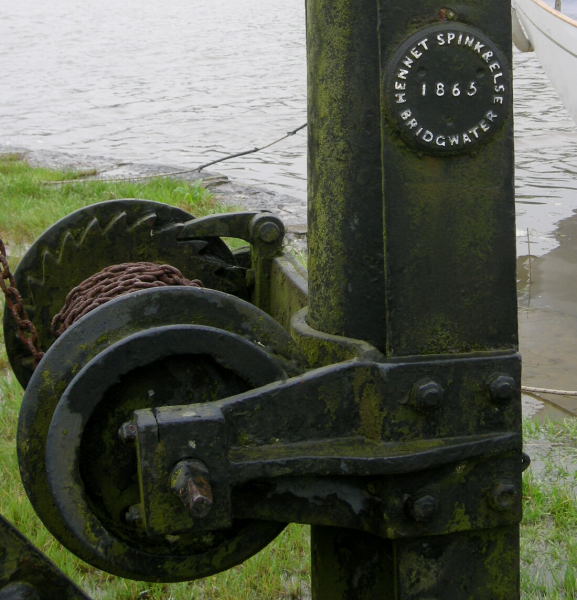 Note: This entry also includes work undertaken by George Hennet's Bristol works and Bridgwater foundry before the establishment of Hennet, Spink & Else.

George Hennet supplied wrought iron caisson lock gates for the Cumberland Basin of Bristol Harbour, ironwork for Clydach Brook Aqueduct, Resolven on the Vale of Neath Railway in 1849, and for Landore Viaduct in 1850 [2]

1863 - 1864 Made 'swivel' bridge for Jessop's North Entrance Lock, Bristol Harbour. See Cumberland Basin Bridges (Bristol). This was similar to Brunel’s bridge located nearby, which was built by George Hennet [4]

1863 'BIDEFORD. The Old Bridge.—At a Bridge Committee Meeting, held on Saturday last, it was decided on the motion of T. L. Pridham, Esq., seconded by Mr. George Brayley, junr., that the tender of Messrs. Hennett, and Co., for the iron work and masonry of the bridge be accepted. The amount of the tender is £3,073. The flagging will be done by workmen of the town.'[6]

1864 'Messrs. Hennett, Spink, and Else, the Bridgwater Iron Foundry, have, we understand, undertaken the contract for the erection the new iron bridge over the Thames at Hampton Court. The work is of a very extensive nature, and will involve the outlay of some thousands of pounds.'[8]

1864 Accident: 'CORONER'S INQUESTS — On Monday an inquest was held at the Infirmary, on the body of Henry Hodge, who was so fearfully mangled at Hennett's Iron Foundry, on Thursday. The unfortunate man lingered until Sunday, one o'clock, when he expired. The evidence showed the occurrence to have been accidental, and the jury returned a verdict accordingly. The jury considerately gave their fees to the widow.'[9]

1865 Partnership dissolved between Follett Charles Hennet, Daniel Spink and Richard Charles Else. Business to be carried on as Hennet and Spink[11]

1867 Catalogue of the 35th Annual Exhibition of the Royal Cornwall Polytechnic Society includes a 1 HP Hugon Gas Engine exhibited by Hennet & Spink, which was awarded a 2nd Silver Medal [12]. Also:-

1867 Royal Cornwall Polytechnic Society Exhibition: 'Messrs. Hennet and Spenk [Spink], of Bridgwater, have forwarded a one horse power engine, the motive power of which is gas. This engine is known as the " Hugon gas engine," invented by Mons. Hugon, and manufactured by the above firm. The engine originally invented has been subjected to successive improvements, twelve patents having been granted since its first introduction. Gas is admitted into a cylinder mixed with air in the proportion of about one part of gas to nine parts of air. This is exposed to a jet of gas, which darts into the cylinder by a side valve. A thread of water is conveyed into the cylinder at the moment of the explosion of the gases, and the water is instantly converted into steam, which makes the pressure more equable throughout the stroke, lubricates the interior of the cylinder, and prevents the drying of the oil. Numberless advantages are claimed for this invention.' [13]

1867 Newspaper article: WATCHET. Improvements — During the past few days Mr. Thomas Griffiths has erected a powerful steam crane on the last pier of the Harbour, for the purpose of discharging coal and other articles for the Taunton line. This is expected to prove a great boon, and it is hoped the outlay will warranted by large increase of trade. The Bristol and Exeter Railway Company are also erecting weighbridge at the station, so that cargoes may now weighed in the trucks. If this Company were now to reduce the rates a trifle, coal might be sold at Taunton much cheaper than at present. The crane was made by Messrs. Hennett and Co., of Bridgwater, and appears to be an excellent piece of machinery.' [14]

1870 'BRIDGWATER IRON WORKS.
Messrs Barnard, Thomas and Co. are instructed to SELL by AUCTION, at the CLARENCE HOTEL, BRIDGWATER, WEDNESDAY, the 23rd March, 1870, at Three for Half-past Three o'clock in the Afternoon, in Two Lots, and subject to conditions to be then produced, All those valuable and Extensive FREEHOLD IRON WORKS, FOUNDRIES, and PREMISES, With FREEHOLD LAND adjoining, situate on the line of the Bristol and Exeter Railway, at Bridgwater, and known as the Bridgwater Iron Works, for many years past in the occupation of Messrs. Hennet and Spink, and their predecessors.
Lot 1. The IRON WORKS, Foundries, Fitting and Erecting shops, Smiths, Carpenters, Boiler-makers, and Pattern-makers shops. Timber Carriage and Repairing Sheds, Stores, Offices, Stables, Cottage, and other substantial buildings and appliances, broad and narrow-gauge Rails and Tramways, with Turn-tables, running throughout the works, and in connexion with the Bristol and Exeter Railway, which is close by. The whole standing on about Five Acres of Land, and being Freehold, and to be Sold free from any incumbrance whatever.
The Fixed Plant, which the purchaser of this lot will have to take at a valuation in the usual way, comprises two steam engines and boilers, numerous steam hammers, circular and other saws, lathes, drilling, slotting, boring, and screwing machines; nut and bolt machines, punching and ??, with every appliance and convenience for an extensive business as engineers, boiler-makers, and manufacturers of railway plant, fittings, and rolling stock.
As to the Loose Plant, of which can be seen with the other, the vendors would be willing to sell that also at a valuation, to the purchaser of Lot 1.
Lot 2. About Two Acres, more or less, of Valuable FREEHOLD BUILDING LAND adjoining the works, and having a considerable frontage on the turnpike road.
Printed particulars and conditions,……'[15]

1870 "NOTICE is hereby given, that the trustees of the estate of Hennet and Spink are prepared to pay a First Dividend of six shillings and eight pence in the pound. All creditors who have not already proved their debts are requested to send in their proofs to us on or before the 16th day of July instant, otherwise they will be excluded from the benefit of the said Dividend."[16]

1870 The business was subsequently re-opened sometime later by Hennet and Co.

Accident in 1857: 'Serious Explosion and Loss of Life.
—On Thursday the 30th inst., an accident occurred at Messrs. Hennett.and Co's iron foundry here, which, though fatal, caused less damage than might have been expected. Some short time since a large iron shaft was sent for repair from the West Somerset Mineral Railway at Watchet. Considerable doubt existed as to whether it was hollow or solid. About four o'clock on the above afternoon, the shaft was taken out of the fire to the steam hammer, when suddenly it exploded. Singularly, none of the men at work upon the shaft and its immediate vicinity were injured, but man named Thomas Powell, of North Newton, who was a short distance off, received a piece of the metal in his stomach, which struck him down, causing his bowels to obtrude. He was taken to the infirmary, but died within an hour. Two other men were injured, but they are nearly recovered. There were upwards of 100 men at work in the yard, and it seems miraculous that there were not more hurt. All the men were quite upset and unfit for work all the afternoon.
'Accident to the Coroner.— J. E. Poole, Esq., Coroner, whilst proceeding to Bridgwater on Friday morning—to hold an inquest on the body of Powell, who met with his death by the explosion at Messrs. Hennet's iron foundry—the weather being threatening, he was in the act of putting on his overcoat, when the wheel of the vehicle passed over large stone. This caused the horse, which was then walking, to spring forward, and Mr. Poole was pitched on to the road. His face was frightfully disfigured, although fortunately the wound was not deep. He was, however, prevented attending at Bridgwater to hold the above inquest on that day, and even on Saturday he was unable to take notes of the evidence given, on account of the injuries he had received. We hope that he will soon recover.' [17]

'Singular and Fatal Explosion.—An inquiry was held on Saturday at the Bridgewater Infirmary on the body of Thomas Powell, a foundryman in the employ of Messrs. Hennett and Co., contractors, who was killed by the explosion of iron tube on the previous Thursday afternoon. It appeared that several workmen were engaged in repairing a large shaft or tube used in boring rocks at the works of the Brendon-hill Iron Company, and a piece having been welded to one end of the shaft, it was again put into the fire, and almost immediately a plug (of the existence of which up to that time the men were entirely ignorant) was forced out by the gas which the heat generated in the bore. The plug, a heavy piece of iron, struck Powell in the abdomen, and inflicted such injuries, that he died in less than an hour. Another man was much hurt, but not seriously. The jury returned verdict of Accidental Death. [18]