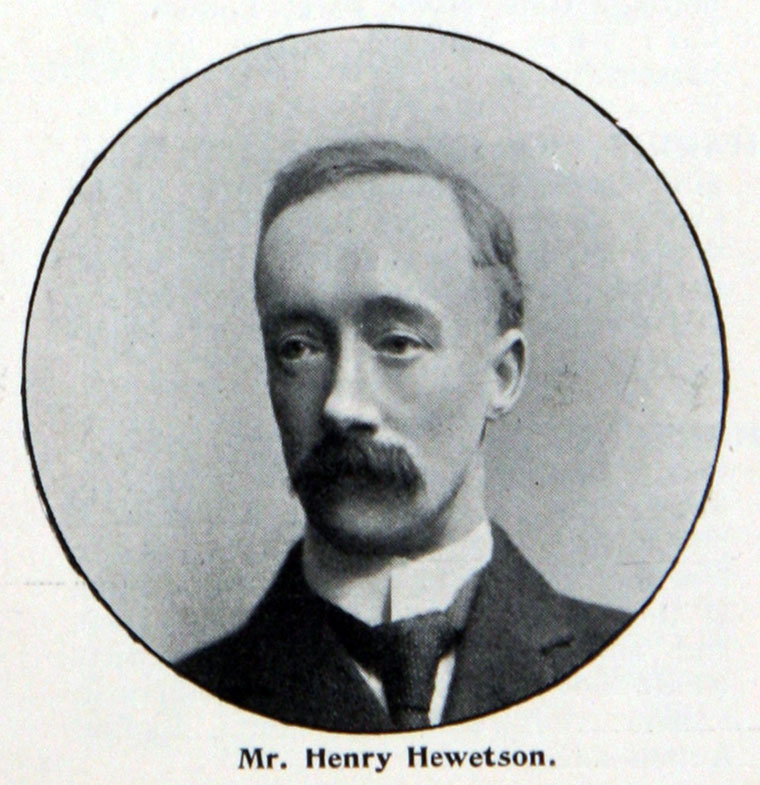 1852 October 5th. Born at Battersea the son of John Hewetson, Merchant, and his wife Emma

1875 September 14th. Granted Freedom of the City of London by Patrimony. Hewetson is of Mitcham and a clerk in a Merchant's House.

Henry Hewetson became a tea trader and the proprietor of a milling and general engineering business in Paddock Wood, near Tunbridge Wells, William Arnold and Sons, which had been founded by William Arnold whose son Walter Arnold now owned the business in partnership with Henry.

When Henry was on a visit to Mannheim he was impressed by the Benz car that he immediately ordered a two-seater 3hp model for £80. He was so impressed that his enthusiasm infected his business partner Walter Arnold and they became the English concessionaire for Benz cars in late 1894 and early 1895. They commenced trading as the Arnold Motor Carriage Co in Mark Lane, London.

1895. He drove his car from Liverpool Station to Charing Cross station where he was accosted by the police and given a warning. Later in the year he drove the car in Ireland.

In October 1899 the company was registered as Hewetsons

1904 HEWETSON, Henry, 3, Bryanston Street, Portman Square, London, W. Cars: 4.5 h.p., 7 h.p. and 10 h.p. Benz. Hobbies: Yachting, football, sports generally. Was the owner of the first petrol motor introduced into England, and the first to ride a bicycle from London to Brighton — a feat accomplished on a wooden machine fitted with iron rims, the journey occupying thirteen hours. Imported the first Benz car into England in 1893, and sold sixty in three years. During June, July, and August, 1902, drove 100 miles a day for fifty consecutive days, and when 5,000 miles were completed the car was sold at public auction for the benefit of King Edward's Hospital Fund. Was sixth on a Benz car in the inaugural motor-car trip to Brighton, 1896. Clubs: Junior Constitutional, A. C. G. B. & I. [2]