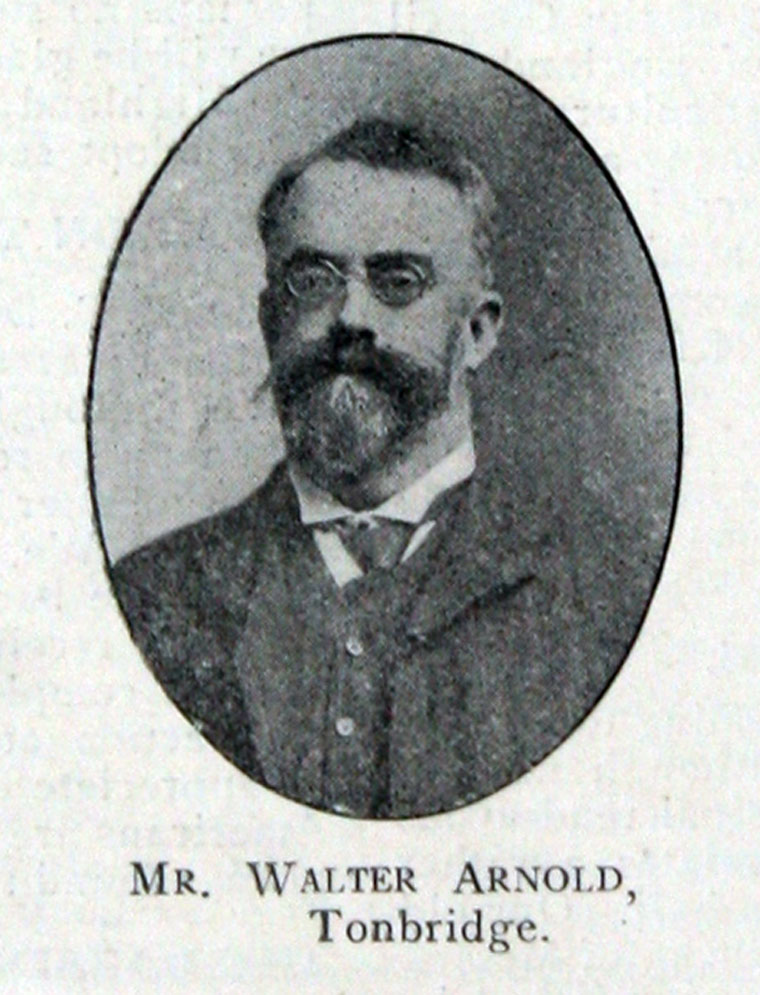 Proprietor of a milling and general engineering business in Paddock Wood, near Tunbridge Wells. This was William Arnold and Sons founded by his father William Arnold and Walter now owned the business in partnership with Henry Hewetson. They commenced trading as the Arnold Motor Carriage Co in Mark Lane, London.

Became the first concessionaire for Benz cars with Henry Hewetson they commencing in 1894.

1896 Summoned for using a horseless carriage at Paddock Wood and fined. Described as a traction-engine proprietor of East Peckham. [2] [3][4]

In October 1899 the company was registered as Hewetsons

1915 Walter Arnold of Branbridges resigns from Tunbridge Wells Farmer's Club due to ill-health.[6]

We regret to announce the death yesterday of Mr. Walter Arnold, of Branbridge House. East Peckham. The deceased gentleman, who was aged sixty, had been in failing health for some time.

Coming of an old Sussex family, which had farmed on the Bayham Estate for nearly half a century, as well as carrying on an important milling industry. Mr. Walter Arnold, like his brother, Mr. George Arnold, was a familiar and popular figure in agricultural in Kent and Sussex. Residing formerly at Bartley Mill, Frant, and latterly at Branbridge, East Peckham, Mr. Arnold was a recognised authority on motor traction and agricultural implements, not to mention milling, hop-growing, and agriculture generally. His judgment and advice were always greatly valued.

He was one of the pioneers in Kent in motor traction. He was Chairman of the Kent Traction Engine Owners' Association, out of which was evolved the National Association, of which he was one the founders, and he did excellent work the time Sir Arthur Boscawen was the Member for Tonbridge securing greater legal facilities for motor haulage.

At the time Sir David Salomons organised the first motor exhibition in England, Mr. Arnold was one of the few members of the Agricultural Association to recognise the great future of automobiles, and he, with his brother, supported the request for the use of the Show Ground for the exhibition, which other members were inclined to oppose.

Mr. Arnold was for many years one of the Judges of the implement section of the Agricultural Show, and materially raised the importance of the Show in this respect. He served two years President of the Farmers' Club - the first of the Presidents to be thus re-elected - and during this period he read several valuable technical papers to the members.

In parochial affairs Mr. Arnold was former Chairman of the Mark Cross Highway Board and a member of the East Peckham Parish Council. He was connected with the Medway Navigation and Conservancy, and took a practical and useful part in the reconstruction scheme, which has now greatly increased the importance of the Upper Medway for barge traffic.

In East Peckham he took a kindly interest, with his brother, in the welfare of his work-people, and the provision of an excellent recreation hall is largely due to his generosity. wide circle friends will regret the death of one who had endeared himself to all, not only his genial nature, but his readiness to place his great practical experience at the disposal of all who his advice.