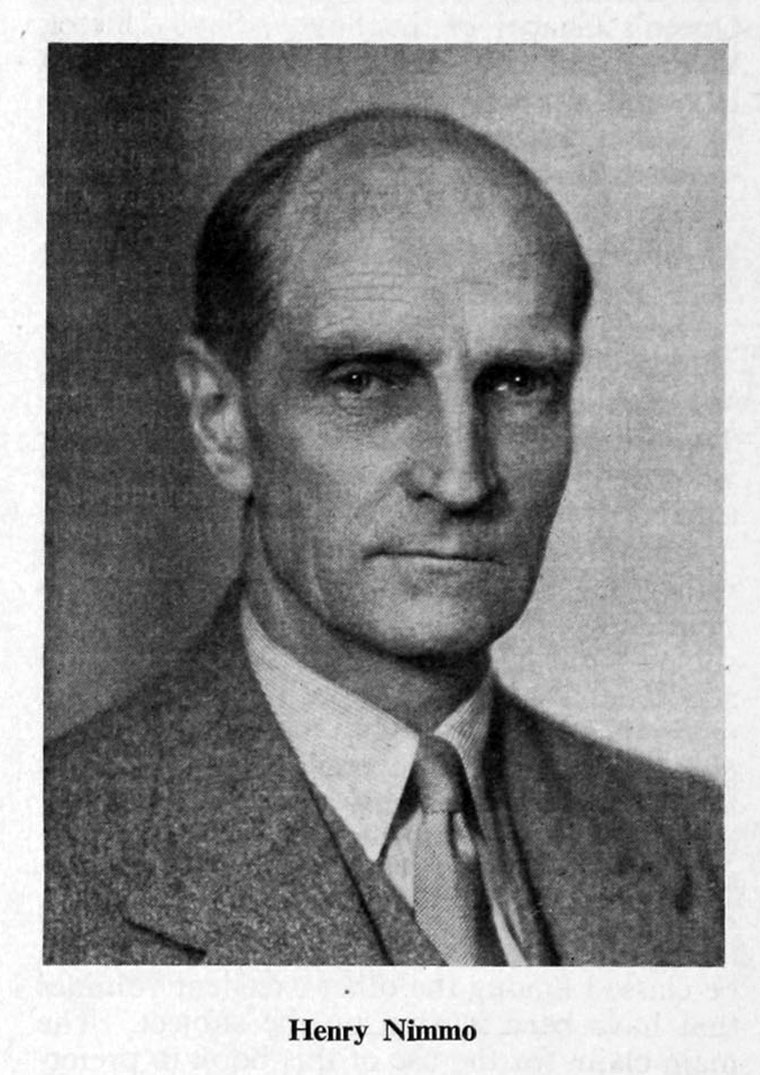 Henry Nimmo (1885-1954), chairman of the Southern Electricity Board

IT is with regret that we have to record the death at Matching Green, Essex, on Monday, October 25th, of Mr. Henry Nimmo, who was chairman of the Southern Electricity Board and was formerly an Electricity Commissioner.

Henry Nimmo was born at Cambusnethan, Lanarkshire, in 1885, and was educated at Airdrie Academy and Coatbridge Technical School. His practical training was acquired first with Messrs. Shearer and Pettigrew, of Wishaw, and then with Bruce Peebles and Co., Ltd., of Edinburgh.

In 1906 he joined the British Westinghouse Company as an erection engineer and a year later he was appointed chief electrical engineer to the Oakbank Oil Company, Winchburgh.

After two years in that position he went to Burma as chief electrical engineer of the Irrawaddy Flotilla Company, Rangoon. His association with the electricity supply industry began in 1912, when he became assistant engineer to the Rangoon Electric Tramway and Supply Company, and in 1914 he was appointed officiating chief electrical engineer in the Public Works Department of the Government of Burma.

On returning to Burma after the war he became chief electrical engineer and electrical inspector to the Burmese Government, and he was responsible for carrying out the hydro-electric survey of that country.

His service in Burma ended in 1929, when he returned to England with the appointment of chief engineering inspector to the Electricity Commissioners, at a time when the British grid system was coming into being.

In 1945 he was appointed an Electricity Commissioner. During the war he also acted as electrical power adviser to the War Office.

When the electricity supply industry was nationalised in 1948, Mr. Nimmo became chairman of the newly created Southern Electricity Board and a part-time member of the British Electricity Authority. His interests and his services to the electrical industry were many sided. He was a member of council of the Institution of Electrical Engineers and served for three years as honorary treasurer. He was also a member of council of the Electrical Research Association and of the British Electrical Power Convention and a member of the administrative council of C.I.G.R.E. (Conference Internationale des Grands Reseaux Electriques).

Mr. Nimmo's attitude towards the status of the engineer in public affairs was well exemplified by his active interest in the Engineers' Guild and, when he died, he had just completed two years in office as the president of the Guild. He was a member of the three engineering Institutions the Civil, Mechanical and Electrical Engineers.

A Memorial Service will be held at The Queen's Chapel of the Savoy, Savoy Street, W.C.2, on Thursday, November 4th, at 12 noon.

He served in the 1914-1918 war becoming eventually officer-in-charge of the London Electrical Engineers, Royal Engineers (T.), after having been employed with the Government of Burma, Public Works Department, as electrical engineer, for approximately two years, which position he resumed after demobilization.

Major Nimmo was born in 1885, and he received his education at Airdrie Academy, Coatbridge Technical School, and privately, later spending five years as an apprentice.

Since 1952 he had been President of the Engineers' Guild, and since 1951 Vice-President and Member of Council of the Confederation Internationale des Grands Reseaux Electriques.