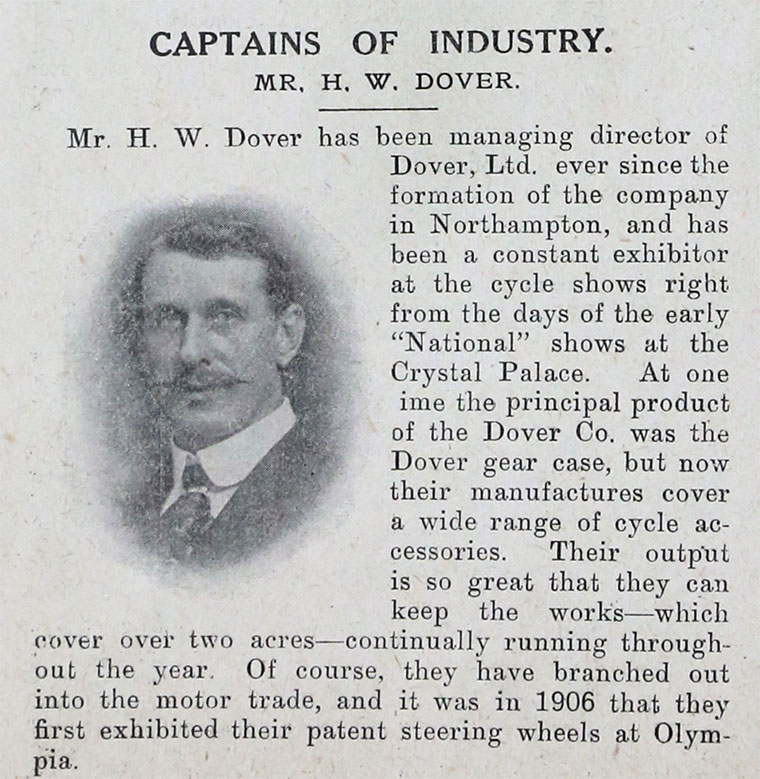 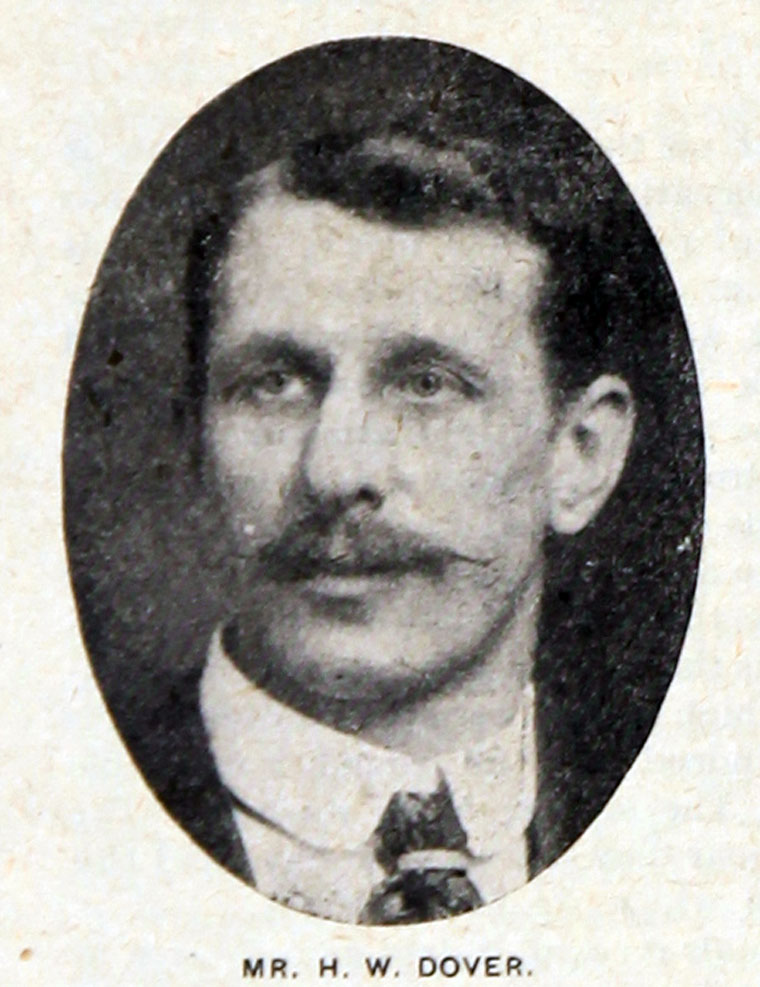 Councillor Horace Walter Dover of “Holyrood”, Harlestone-road, Northampton be the next Mayor of Northampton......

It was at the National and British School at Princes Risborough where Mr. Dover received his early education at a fee of 2d. per week, and the part of the curriculum which attracted him most was the lectures sound and other scientific subjects. delivered by Professor Tindall. From Princes Risborough, Mr. Dover went to London, where for four years he attended the evening classes on machine construction and drawing, at the Birkbeck Institute. The instruction he received here stimulated his interest in engineering and mechanics and was the foundation from which sprang the shoots of initiative which have carried him to successful achievement. Coming to Northampton five and thirty years ago, Mr. Dover became associated with Mr. Thomas Phipps Dorman in the manufacture of lock-stitch sewing machines. The business was carried on under the title of Patents Manufacturing Co., and Mr. Dover was manager of the concern, which turned out 10,000 of the machines. He had been working on the construction of this machine in London, and it was Mr. Dorman who induced him to come to Northampton. The company's premises were those now occupied by Messrs. Wren and Co., boot polish manufacturers, on the Mayorhold.

Three years later Mr. Dover, to use his own words, branched off on to bicycles, and brought out the Whirlwind, a type of machine which was supplied to many local racing men. Mr. Dover was never content merely with the manufacture of things. He had, and still has, an inventive mind, and he was always examining the principles on which machines are made and seeking where he might make improvement. It was while engaged on the manufacture of bicycles that he invented a detachable gearcase, which immediately caught the market. With the establishment of a new company known as the Dorman Engineering Co., thousands of these cases were turned out to inset the heavy demand, which continued throughout the 11 years run of the patent.

Mr. Dover's inventive genius was still asserting itself, and at the present time he has over a hundred patents to his credit. Home of them have been dropped, but the things which are to-day being made by Dover, Ltd., are principally his own inventions. One of the chief of these, apart from the detachable gear case already mentioned, is the bicycle handle grip or which the firm made an average or 11,000 pairs a week during the run of the patent. New patents for this invention were taken out, and the turnout is now in the region of 25,000 pairs a week. Of steering wheels for motor cars, the firm made an average of 700 a week during the 16 years' operation of the patent. Since then Mr. Dover has improved upon his original invention and has taken out fresh patents in U.S.A., France, and Italy, besides this country. The output at present Is a thousand week. Of other inventions which came from Mr. Dover's brain, may be mentioned a trouser band, the output of which runs to between 3,000 and 4,000 pairs a week; a spruce bottle opener; a non-inflammable screen for aeroplanes, and improvements in connection with the construction and fitting of submarines. "We have knocked the Germans out with our handle-grips" Mr. Dover told an Echo reporter. "We managed to cope with their competition and get good orders booked up.'

As an employer of labour, Mr. Dover has earned the esteem and respect of his work-people. He appreciates very highly the way in which they have worked with him, and helped him to cope with the many difficulties that have arisen from time to time.

The firm of Dover, Ltd., now has depots at Coventry, Manchester, Park Royal and Willesden. Councillor Dover's brother, Mr. Albert E. Dover, manages the Coventry establishment, and, says the Mayor-elect, "he will no doubt take over some of my duties during my year of office, as I realise that a great deal of time will have to be given to Mayoral affairs” ,

The Mayor-elect's work on the Town Council has been very useful. He is a Conservative, and what one might call a good Conservative, but he is not a bigoted party man and he has the regard of all his colleagues on the town's governing body. Mr. Dover did not enter the Town Council through the medium of a contested election. He was appointed an Alderman in 1918 to fill the vacancy caused by the resignation of the late Alderman W. Bree, and a pleasing feature of his election was that Liberals, Conservatives and Labour members alike voted for him. In 1920 Mr. Dover and his wife and several friends went on a six months trip round the world. His Aldermanic term of office expired that year and he was not re-appointed immediately on his return. This honour, however, came to him again in June, 1921. Last year he resigned to fight an election, and was returned as Councillor for the Kingsthorpe Ward, defeating Mr. (now Councillor) A. O. Birt.

Mr. Dover is a past President of the Cycle and Motor Trade Benevolent Fund, and a Past Master of the Kingsley Ledge of Freemasons, a past President of the Northampton Privets Fire Brigades Association, and one of the oldest members of the N. and C.A.A.C. He did valuable work during the war and was captain of the Motor Transport Section of the Northamptonshire Volunteer Force.

The Mayoress-elect comes of a London family, being the daughter of Mr Richard Wright. She was married to Mr. Dover in 1888. Mrs. Dover did splendid service during the war, being actively associated with the Northamptonshire Prisoner of War Fund, work which gained for her the M.B.E, with which she was personally decorated by the King at Buckingham Palace in 1920. She also worked with Lady Butler's Red Cross party and was a member of the Was Pensions Committee. She is at present on the House Committees of the work for Spencer Home of Rest, has been of a practical nature.

Horace Walter Dover was born in 1859 and was educated at the Birkbeck Institute.

After serving an apprenticeship with Chipperfield and Co, he started in business as Dover of Northampton, of which firm he subsequently became Managing Director.

He was responsible for many inventions, including the hollow steel steering wheel, the Dover detachable gear-case, the Dover Pump and other devices for cars and cycles.

He took a great interest in local affairs and had been Mayor of Northampton.

He was elected a Member of the Institution of Automobile Engineers in 1907.