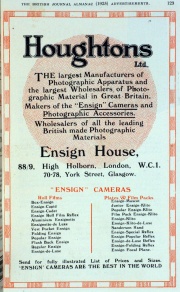 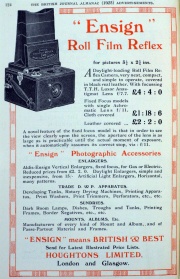 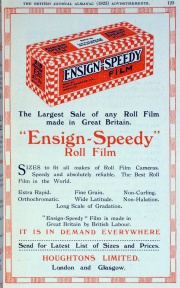 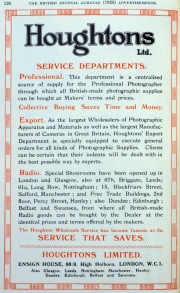 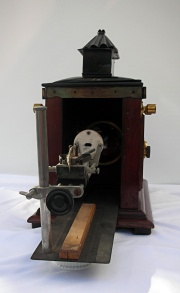 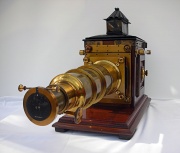 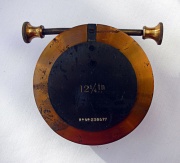 1834 Company established. George Houghton joined the Frenchman Antoine Claudet to manage a glass warehouse in London, under the name Claudet and Houghton.

1839 After the announcement of the Daguerreotype process, Claudet secured a license directly from Daguerre and spent most of his time operating his own studio while Houghton began selling Daguerreotype requisites.

1892 It then became George Houghton and Sons.

1901 The company's headquarters, at 88/89 High Holborn, were called Ensign House.

1903 Production of the roll film brand Ensign. The first Ensign logo was a shop sign with the letter "N" inside.

1903 The company was incorporated as George Houghton and Sons Ltd.

1904 In March, it absorbed Holmes Brothers (the maker of the Sanderson cameras), A. C. Jackson, Spratt Brothers and Joseph Levi and Co, to form Houghtons Ltd.

In the early 1900s the company built a factory for the production of cameras at Fulbourn Road in Walthamstow. Houghton was a renowned maker of magazine cameras like the Klito. Another characteristic product of Houghtons was the Ensignette, a folding camera developed by the Swedish engineer Magnus Neill.

In 1908 it was the biggest British camera factory.

1911 The logo was replaced by the name Ensign written inside the British marine flag.

1915 Houghtons went into partnership with W. Butcher and Sons, founding the joint venture Houghton-Butcher Manufacturing Co, to share the manufacturing facilities. (This agreement was essential for Butcher, which had no manufacturing plant and was mainly trading imported German cameras before the outbreak of World War I.) The two companies Houghtons and Butcher continued to trade separately, and the camera designs remained distinct.

1930 A selling arm, Ensign Ltd, was set up. (The manufacturing company based at Walthamstow kept the name Houghton-Butcher Manufacturing Co Ltd until 1945.) The new trading company kept many of Houghtons and Butcher's camera ranges.

1939 Introduced the Ensign Ful-Vue box camera, one of the most popular cameras of its time in the UK.

1940 The headquarters of the trading company Ensign were destroyed by an air raid on the night of 24/25 September. In October, the assets of the company, including enlargers, epidiascopes and cine-cameras, were taken over by Johnson and Sons Manufacturing Chemists but the trademark Ensign was kept by the manufacturing company Houghton-Butcher Manufacturing Co which assumed the advertising and distribution of the Ensign cameras alone until 1945.

OR: The old-established business of Houghton-Butcher, of High Holborn, London, was destroyed by enemy action in September 1940. In October, Ensign, the sales wing of Houghton-Butcher, was wound up and sale of the remaining stock of enlargers, epidiascopes and cine cameras was taken over by Johnson and Sons Manufacturing Chemists.

1945 Houghton-Butcher Manufacturing Co associated with the film maker Elliott and Sons (maker of the film brand Barnet) and became Barnet Ensign. In 1948 Ross and Barnet Ensign were merged to Barnet Ensign Ross Ltd., which was finally renamed Ross-Ensign Ltd in 1954.

Post-WWII. After the war, the company soon abandoned the sophisticated Ensign Commando rangefinder camera and continued the range of Ensign Selfix and Ensign Autorange folding cameras, while introducing new models like the Ensign Ranger or the Snapper.

1946 Among simpler cameras, a new version of the Ensign Ful-Vue was released, which was further developed to the Ful-Vue Super and Fulvueflex pseudo-TLR.

1961 George Houghton's sons and grandsons continued in the business until the firm disappeared in 1961, when the company stopped making cameras.