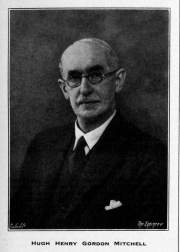 "...whose death, we regret to record, occurred on Friday, March 11th, at the age of sixtythree, began his professional career as assistant engineer with Heenan and Froude, Manchester, on the construction of the Blackpool and Wembley Towers. He was subsequently employed by Coode, Son and Matthews on the Prince of Wales Pier, Dover, 1898-1901; the Outer Barrier Works, Hodbarrow, 1901-1903; and at Colombo Harbour, 1903-1905. In 1905, he was appointed harbour engineer at Madras, and in 1919 succeeded the late Sir Francis Spring as Engineer Chairman of the Madras Port Trust. During these years he was a widely known and popular figure in the social life of Madras. He was Vice-Commodore of the Sailing Club, which he was instrumental in forming, and commanded the Madras Artillery Volunteers. He came to England in 1916 to join the Army, but great damage to the harbour at Madras as the result of a cyclone necessitated his recall. He returned to England in 1917 and joined the Royal Artillery with the rank of Colonel. In 1919 he was appointed Honorary A.D.C. to the Viceroy. From 1920 to 1922 he was a representative for India on the Council of the Institution of Civil Engineers.

From 1921 until his death Mr. Mitchell was a partner in the firm of Coode, Fitzmaurice, Wilson, and Mitchell (later Coode, Wilson, Mitchell, and Vaughan-Lee), chartered civil engineers, and was principally engaged on the design and supervision of important dock and harbour works in this country, Kenya, Uganda, Zanzibar, Tanganyika, Ceylon, and the Straits Settlements, and irrigation works in Iraq, to which countries he had paid frequent visits. He was awarded the Brilliant Star of Zanzibar in 1929, and was the recipient of the Institution of Civil Engineers' George Stephenson Gold Medal and Indian premium for papers contributed. Mr. Mitchell was an esteemed member of his profession, and his pleasing personality and outstanding ability left a lasting impression upon all who came in contact with him.