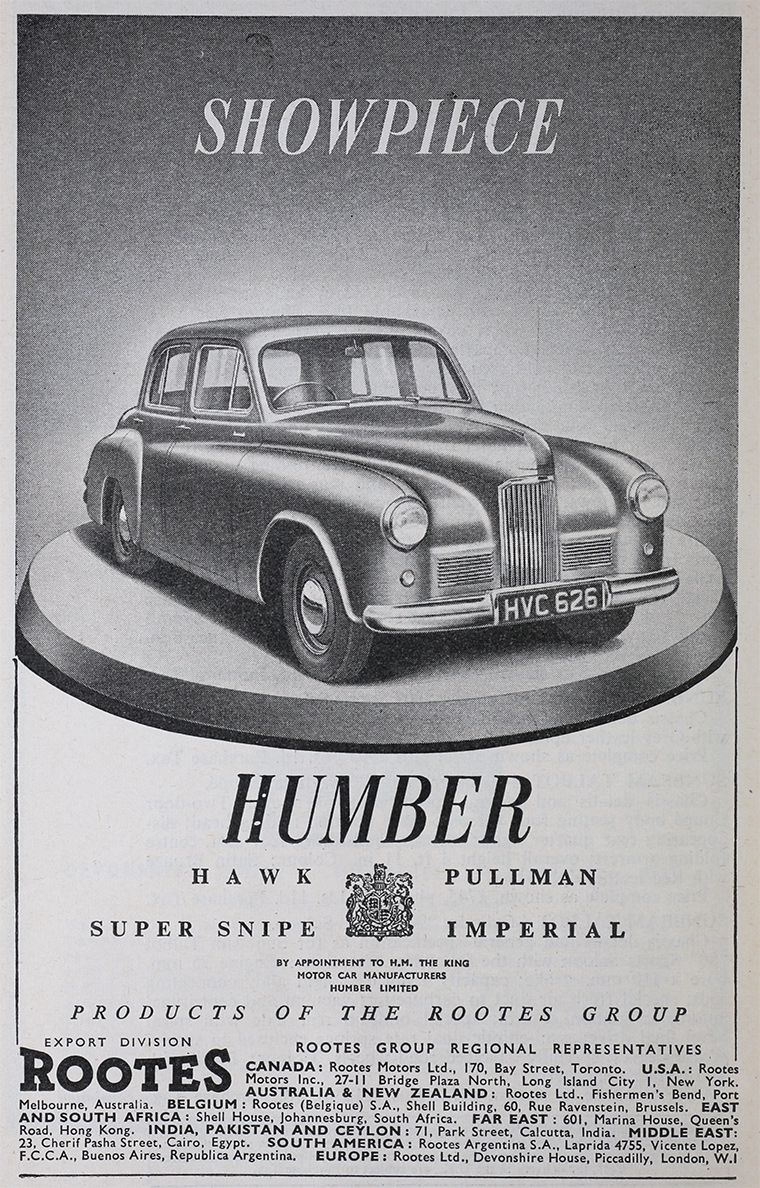 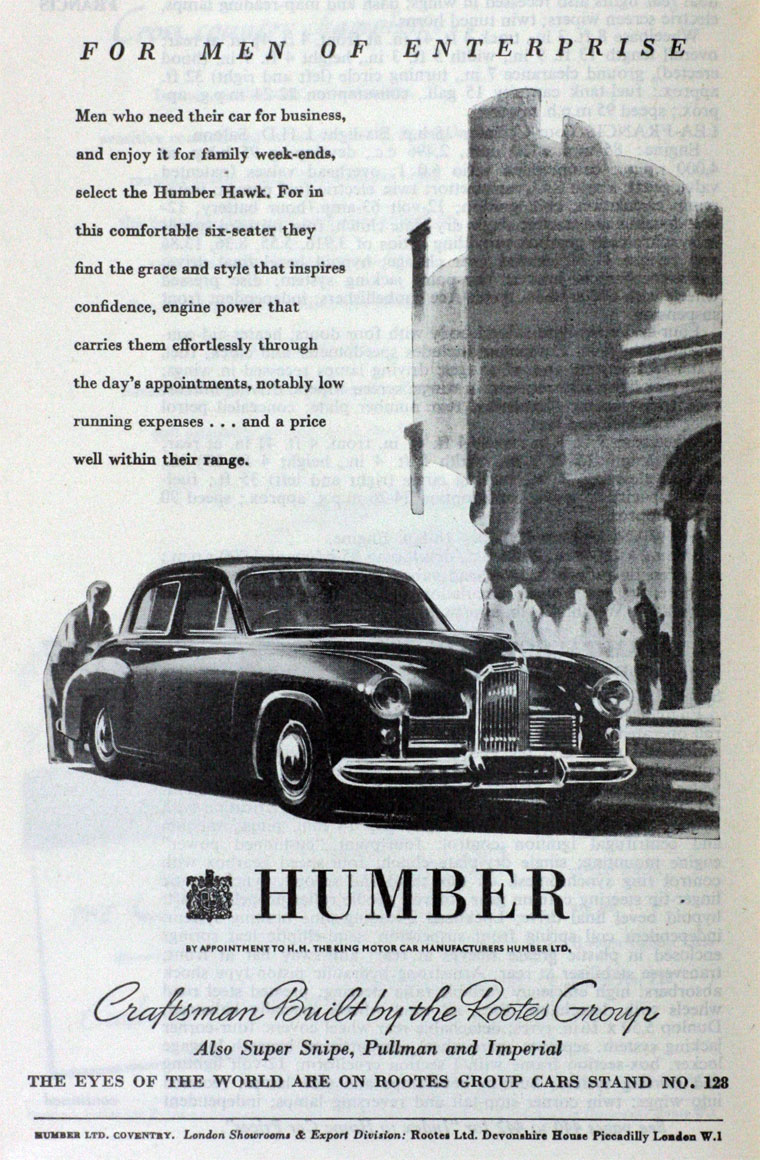 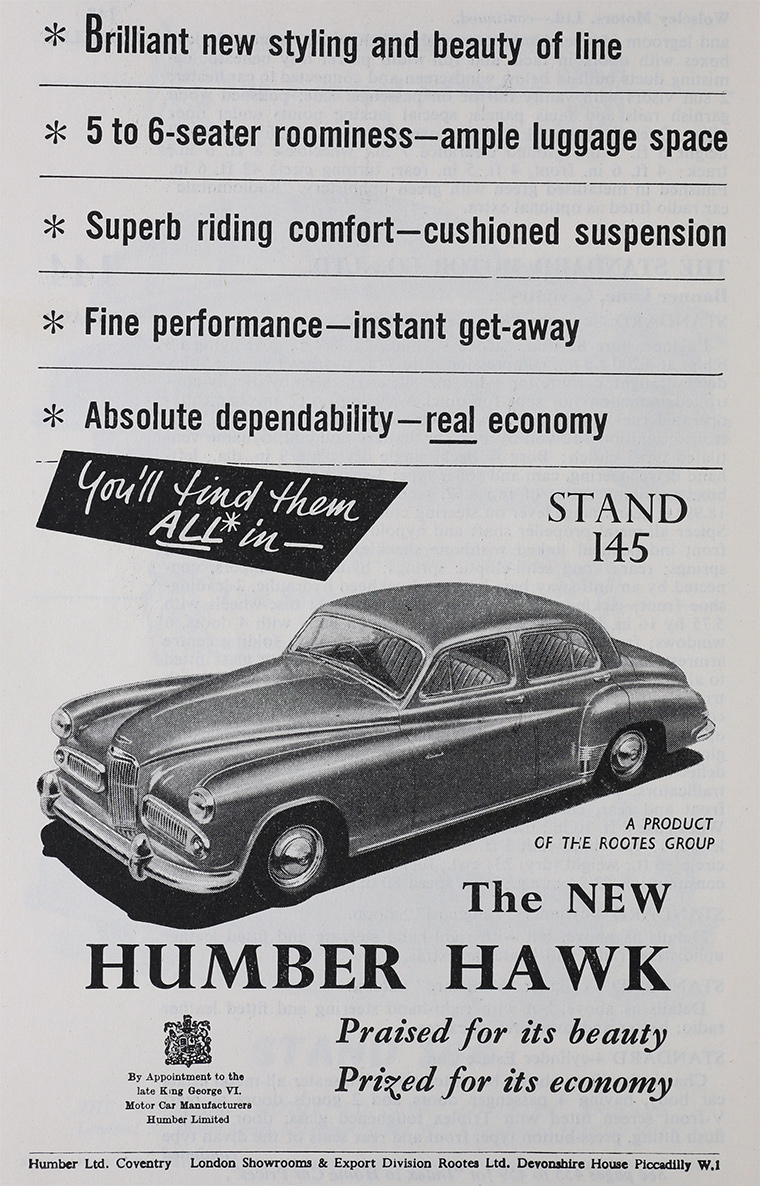 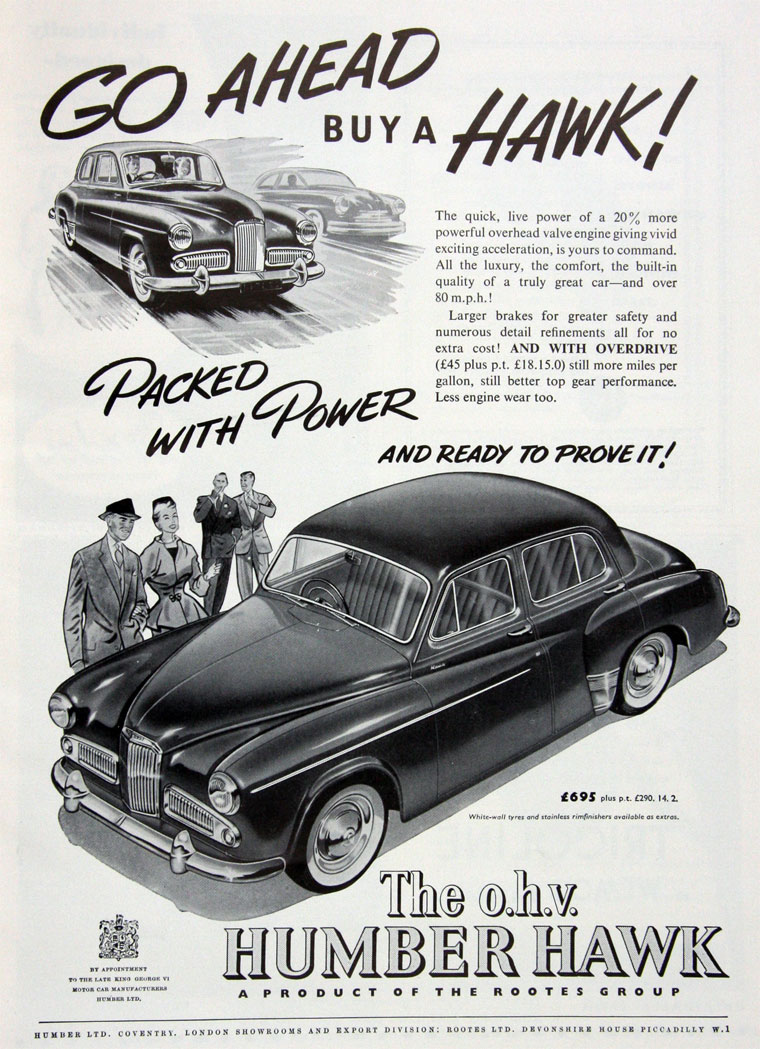 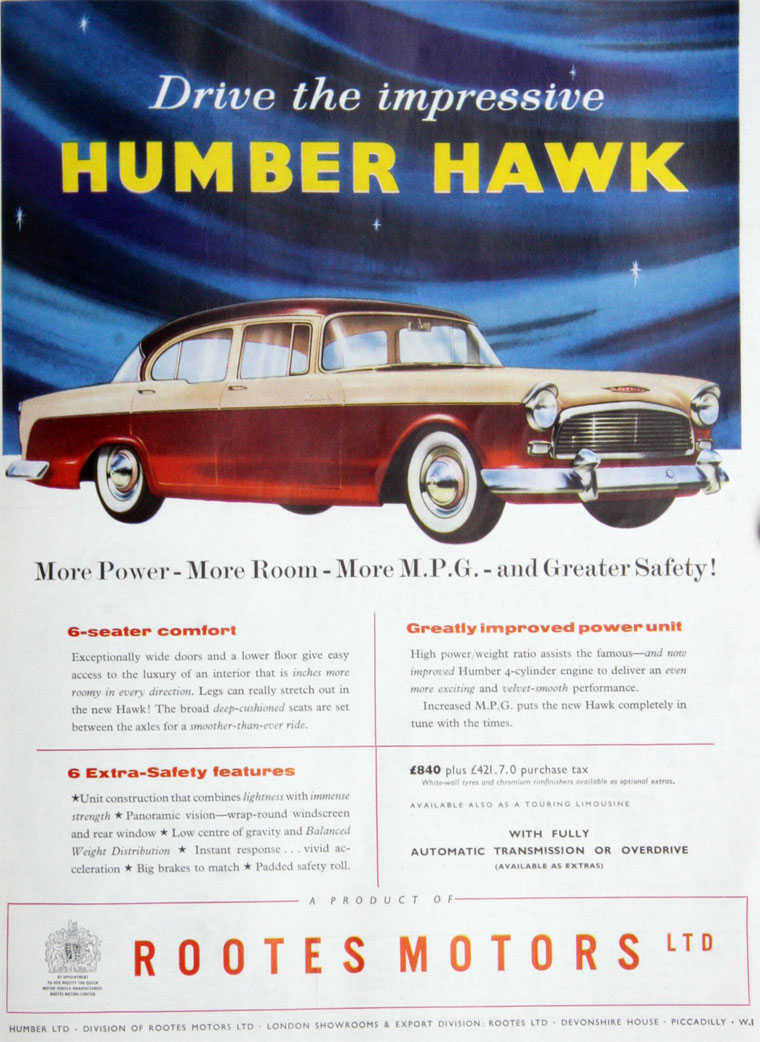 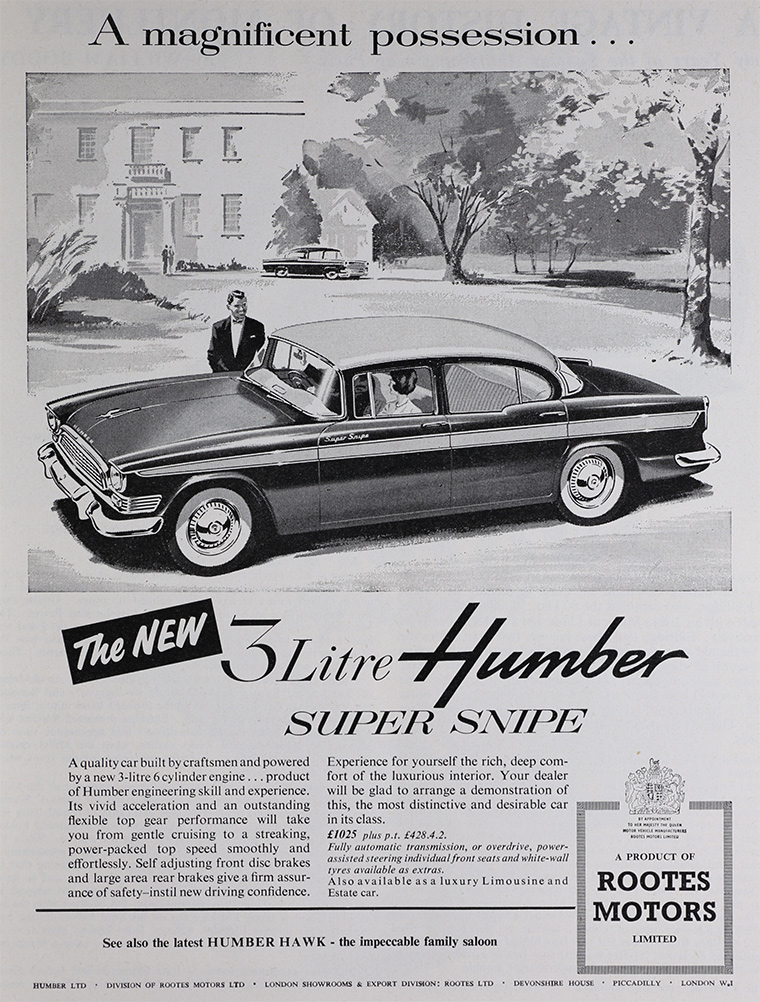 Note: This is a sub-section of Humber: Cars

The Hawk was the first Humber car to be launched after World War II but was not really a new vehicle being heavily based on the pre-war Hillman 14. The engine dated back to the early 1930s when it was first used in the Hillman 12 and was a 1,944 cc, side valve, four cylinder unit and it drove a live rear axle through a four speed gearbox with centrally located floor change.

The four door body was mounted on a separate chassis and was of the six light design (three windows on each side) with a sunshine roof as standard. Suspension was independent at the front using a transverse leaf spring and at the rear the axle had half elliptic springs.

The Mark II version of September 1947 was a very mild face-lift, the main difference being a column gear change.

The Mk III Hawk was a completely new car and was first shown at the London Motor Show in October 1948 but it still retained the earlier engine and transmission. The new body was styled by the Loewy Studio and the separate headlights of the old model were gone, along with the separate front wings. The chassis was new with coil sprung independent front suspension. The rear axle was also a new design with hypoid gearing. The body could be finished in a wide range of colours, both as two-tone and metallic. The metallic finishes would be offered on all the Hawks until the models demise in late 1967/early 1968.

In 1950 the Mark IV version arrived with a larger, 2,267 cc engine incorporating, as before, an aluminium cylinder head. The Mark IV also used larger 15 inch wheels.

The 1952 Mk V was mechanically unchanged but had a new treatment to the front, and was also available as a "luxury touring limousine". A lowered bonnet line, wrap-around bumpers with over-riders distinguished this model from the Mk IV.

The main change with the Mk VI was the fitting of an overhead valve cylinder head to the engine. The rear of the body was slightly changed, which made the car longer.

In 1955 an estate version with fold down tailgate appeared.

The April 1956 Mk VIA was a fairly minor upgrade with changes mainly to the interior. A de-luxe version was added to the range.

A Mk VI estate car with overdrive tested by the British magazine The Motor in 1956 had a top speed of 79.7 mph (and could accelerate from 0-60 mph in 25.2 seconds. A fuel consumption of 22.8 miles per imperial gallon was recorded. The test car cost £1405 including taxes.

The 1957 Hawk had a completely new body with unitary construction which it would go on to share with the 1958 Humber Super Snipe. This was the biggest body shell for a saloon/estate car built in Great Britain at the time. The 2,267 cc engine was carried over, though with modifications to the distributor mounting, and other details; and an automatic transmission, the Borg Warner D.G. model, was now available. The body was styled in Rootes own studios and featured more glass than previous models with wrap around front windscreen, which gave it a considerable resemblance to a 1955 Chevrolet. The estate version featured a horizontally-split tailgate - the lower half opening downwards (to provide an extra length of luggage-platform if necessary) and the upper half upwards. The fuel-filler cap was concealed behind the offside rear reflector.

A Series I car without overdrive was tested by the British The Motor magazine in 1957 had a top speed of 83.9 mph and could accelerate from 0-60 mph in 19.7 seconds. A fuel consumption of 22.5 miles per imperial gallon was recorded. The test car cost £1,261 including taxes of £421.

The 1959 Series 1A had changed gear ratios and minor trim changes.

The Series II launched in October 1960 had disc front brakes, servo assisted. The automatic option was no longer available on the home market.

The Series III of September 1962 had a larger fuel tank and bigger rear window. The export model automatic option was also dropped.

More significant changes came with the October 1964 Series IV. The roof was made flatter, the rear window smaller and an extra side window fitted behind the rear doors. Synchromesh was fitted to bottom gear. An anti-roll bar was fitted at the rear.[9]

The final Series IVA of 1965 saw the automatic option re-introduced, this time being the Borg Warner Model 35.

Some "Series" cars are found with a floor type gear change replacing the standard column mounted gearstick — these are later owner modifications resembling the original Factory option, and the parts necessary for this were obtained from the Commer Karrier Walk-thru type vans and light Lorries which were also made by the Rootes Group at this time. All of the Automatic transmission optioned cars were fitted with the column type selectors only.

In March 1967 Rootes announced that production of the Humber Hawk, along with that of the Super Snipe and Imperial had ceased. The announcement stated that the cars' place in their range would be filled by Chrysler Valiants imported from Australia, although there is no evidence of the UK car market having been flooded by Valiants following the announcement.

After Hawk production ended, Rootes came to concentrate on sectors offering greater volume, no longer featuring as a UK provider of large family cars. It had, in particular, been unusual for UK manufactured cars of this size to feature a spacious station wagon / estate car version; and, following the demise of the Humber Hawk, the UK market for large estate cars quickly came to be dominated by the Volvo 145, introduced to the UK in March 1968, and its successors.

The aerodynamic contouring of the Humber Hawk's body lines give an air of speed and grace to this attractive six-seat four-door saloon. The 1950 version of this popular model has an engine of increased power and is fitted with improved cushion-type tyres.

The large windscreen and curved rear window are important features of the Hawk, as will be seen from the accompanying photographs. There is also a slight family resemblance between the Hawk and the Hillman Minx and, as they are both products of the Rootes Group, the advantages of this relationship can be appreciated.