Grace's Guide is the leading source of historical information on industry and manufacturing in Britain. This web publication contains 142,194 pages of information and 227,783 images on early companies, their products and the people who designed and built them.

Super Snipe Mk I. Reg No: AFN 206. Exhibit at the Dover Transport Museum. 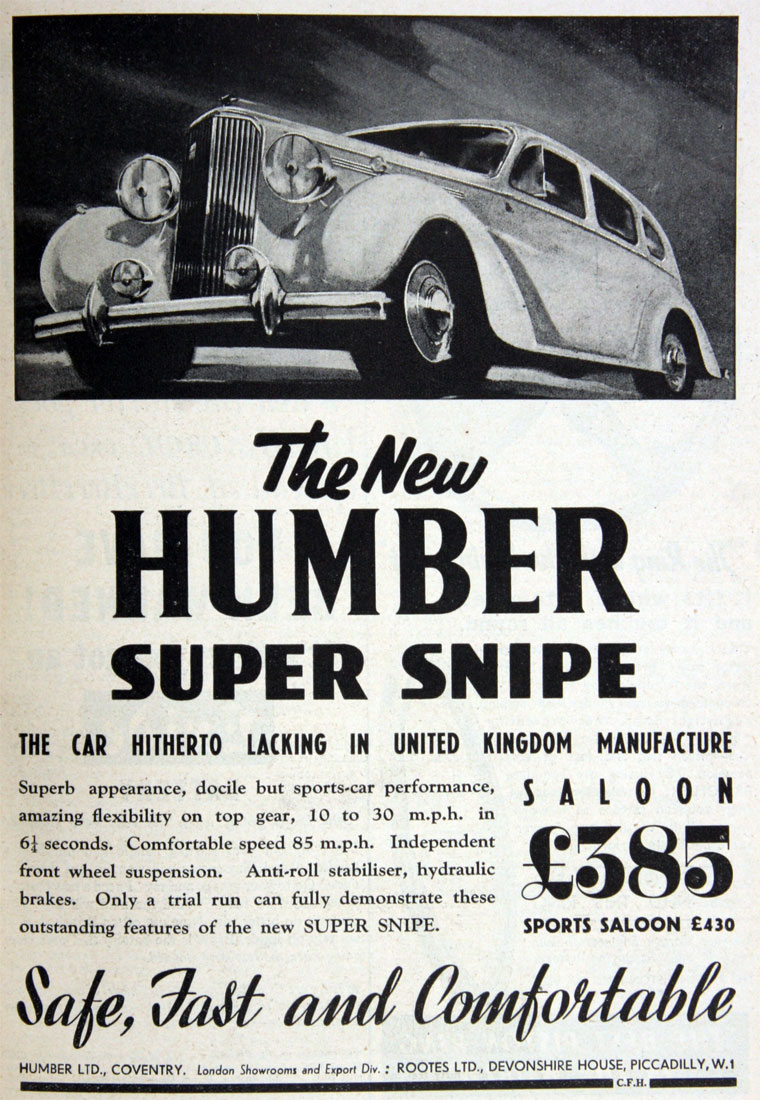 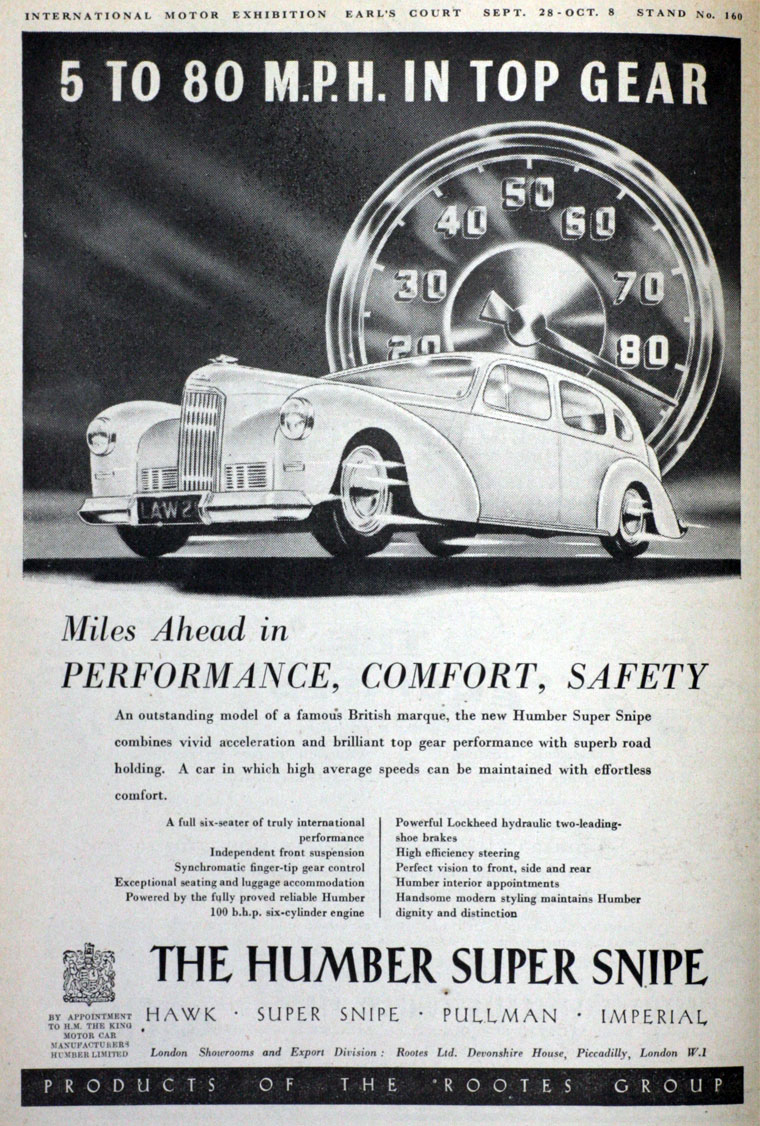 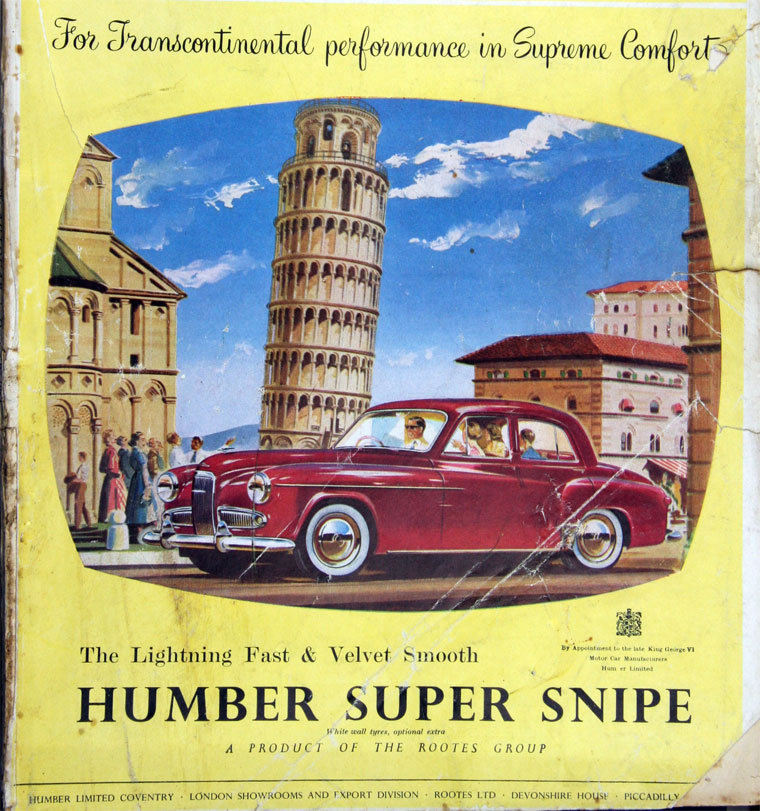 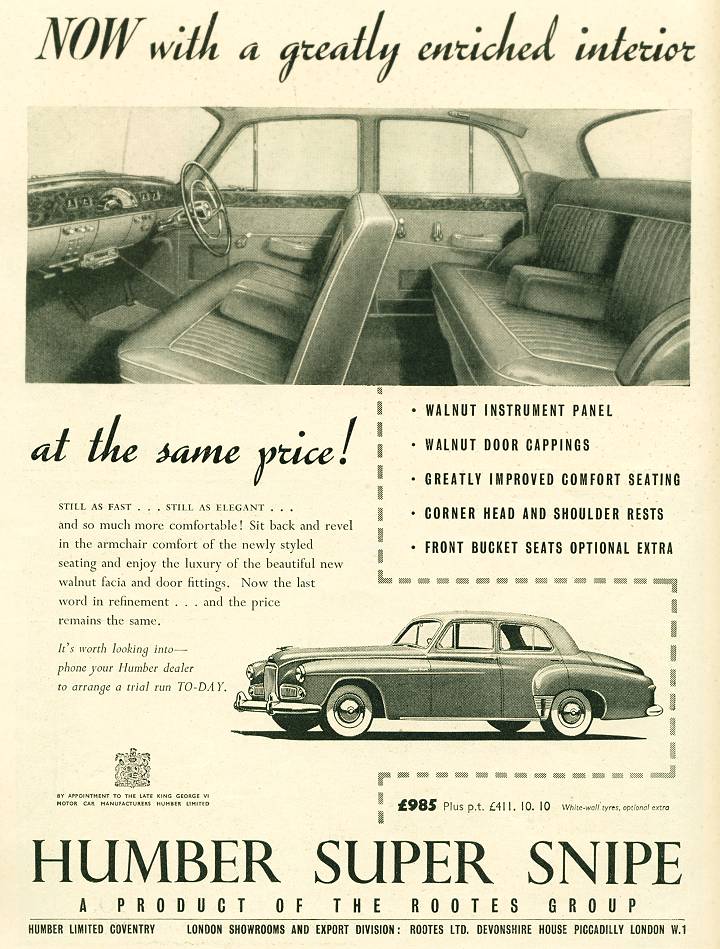 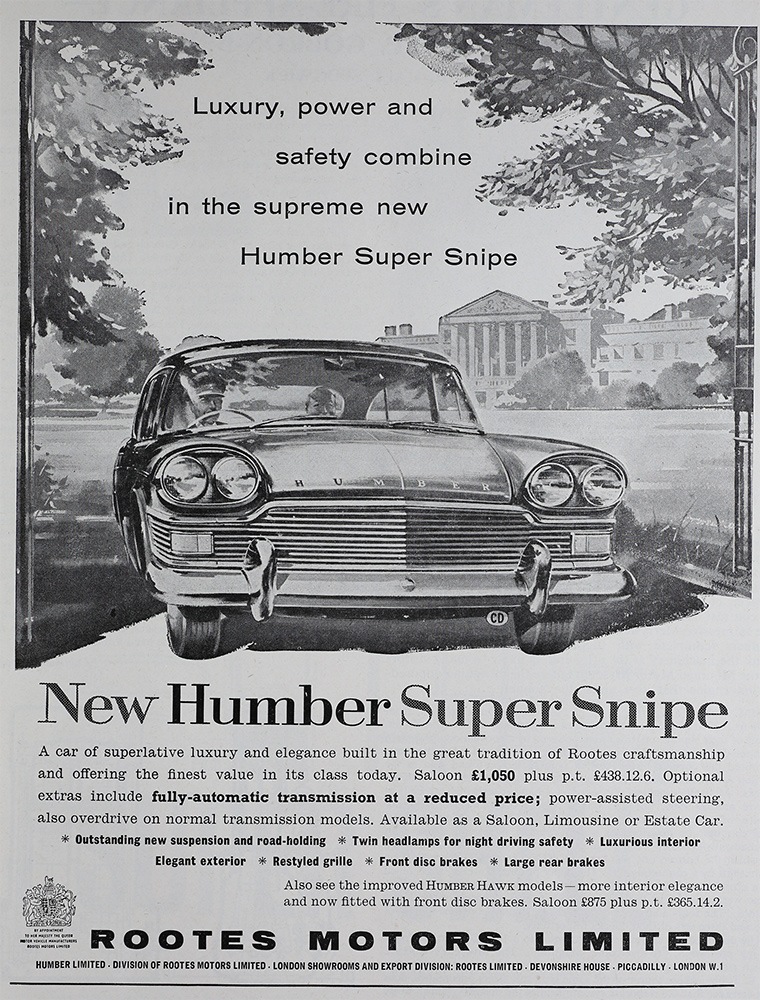 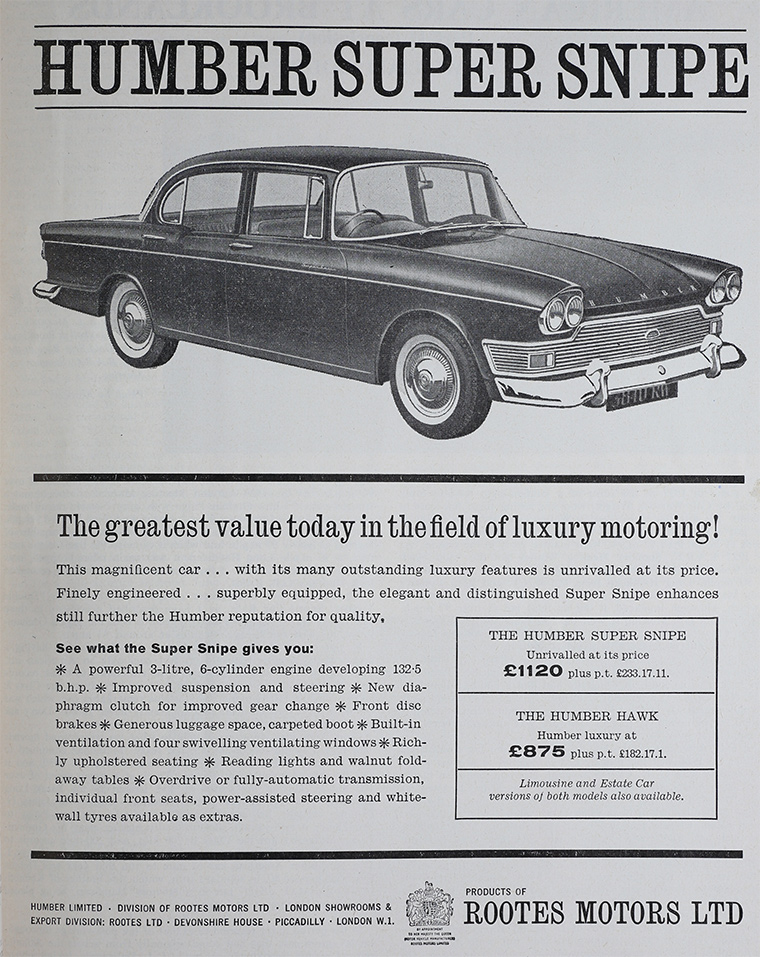 Note: This is a sub-section of Humber: Cars

The Super Snipe was introduced in October, 1938, derived by combining the four-litre inline six-cylinder engine from the larger Humber Pullman with the chassis and body of the Humber Snipe, normally powered by a three-litre engine. The result was a car of enhanced performance and a top speed of 79 mph — fast for its day. Its design was contributed to by American engine genius Delmar "Barney" Roos who left a successful career at Studebaker to join Rootes in 1936.

The Super Snipe was marketed to upper-middle-class managers, professional people and government officials. It was relatively low-priced for its large size and performance, and was similar to American cars in appearance and concept, and in providing value for money.

Within a year of introduction, World War II broke out in Europe but the car continued in production as a British military staff car, the Car, 4-seater, 4x2, while the same chassis was used for an armoured reconnaissance vehicle, the Humber Light Reconnaissance Car.

In 1946, post-war civilian production resumed and the Super Snipe evolved though several versions, each designated by a Mark number, each generally larger, more powerful, and more modern, until production ended in 1957 with the Mark IVB version.

While the post-WWII home market for the car continued as before, the Rootes Group also marketed the car for export. The Super Snipe was relatively successful in Australia, where it was locally assembled from kits, beginning with the Mark IV version in 1952. From 1956 the car was available with automatic transmission, but the model was discontinued shortly afterwards.

In October 1958, a new Super Snipe was introduced and, confusingly, the designation returned to the Super Snipe I but, this time, the variants were identified by a series number. The new car was based on the unitized chassis and body of the four-cylinder Humber Hawk, but with a new 2.6 litre, 2,651 cc, six-cylinder overhead-valve engine based on an Armstrong Siddeley design with bore and stroke of 82.55 mm and near-hemispherical combustion chambers. The Rootes Group ceased production of the Series VA version in July 1967, by which time the group was under the control of the American Chrysler Corporation. The last of the handsome big Humbers were assembled by Chrysler in Melbourne, Australia. Plans to introduce a V8 engine, and for the Chrysler 180/2L to be marketed as a Humber in the UK did not eventuate.

The Mark I was essentially an enlarged version of the 1945 Humber Hawk, itself a face-lifted pre-war car. A version of the 1930s Snipe remained available, with the 1936-introduced 2,731cc engine. Production was 3,909 cars.

For the 1948 Mark II the body was updated, headlights fitted into the wings and running-boards re-introduced. Transverse-spring independent suspension, first introduced on the Snipe and Pullman in 1935, continued to be used.

A few drophead coupés were made by Tickford in 1949 and 1950. The smaller-engined Snipe was discontinued. Early Mark II Super Snipes can be distinguished by round fog lamps below the head lamps. These were dropped in 1949 in favour of rectangular side lamps which were continued in the Mark III. Production was 8,361 cars.

The Mk III followed in 1950 and was externally very similar but had a Panhard rod added to the rear suspension. It can be readily distinguished from the previous model by the simpler dome-shaped bumpers and the rectangular stainless-steel foot-treads on the running-boards.

The Mark IV of 1952 used a 1950 Hawk Mk IV body shell lengthened by 6 in but with a 4,138 cc 113 bhp overhead-valve engine based on one from a Commer truck. Chassis and suspension components were uprated to take the greater weight and power of the Super Snipe, those parts ceasing to be interchangeable with those of the Hawk.

From 1955, overdrive was available as an option, followed in 1956 by an automatic gearbox.

In 1953 The Motor tested a Mk IV and found the larger engine had increased performance with the top speed now 91 mph and acceleration from 0-60 mph in 14.7 seconds. Fuel consumption had increased to 15.5 miles per imperial gallon. The test car cost slightly more at £1,481, including taxes. Production was 17,993 cars.

The Series I Super Snipe had a three-speed manual transmission with optional Laycock de Normanville overdrive on second and top gears, or Borg Warner DG automatic transmission. Power steering was available as an option. Also offered was a touring limousine model with glass partition.

The new Super Snipe was smaller on the outside, but larger on the inside, with improved performance and more modern appearance, similar to mid-1950s American General Motors cars like the 1958 Plymouth Fury. Production was 6,072 cars.

The styling of the 1960 Series III is distinguishable by its four headlights and revised full-width grille. The nose of the car had also been lengthened by 3.25 inches to accommodate an additional pulley mounted on the front of the crankshaft so that air conditioning could be included as an option, principally for the North American market. Production was 7,257 cars.

The 1962 Series IV had a slightly higher-tuned engine giving 124.5 bhp as against 121 bhp. It can be distinguished by its revised rear-window treatment (doesn't wrap around quite as much as earlier models), Snipe bird badge on grille, opening quarter-light windows in the rear doors, and other trim differences. Production was 6,495 cars.

The final Series V version saw a restyle which was also applied to the Hawk, with a flatter roofline, six-light design and a larger, taller windscreen. Twin Zenith Stromberg 175CD carburettors were fitted, increasing the power to 128.5 bhp, and synchromesh was fitted to all ratios in the gearbox — on the previous versions it had only been on the upper two.

Power steering was available as an optional extra, as was an automatic transmission (Borg Warner Type 35 on Series VA), and metallic paint finishes. Production was 3,032 cars.

The Imperial version had a vinyl roof and automatic transmission as standard, though a manual version could be ordered. It also featured adjustable rear shock absorbers, a rear heater and optional West-of-England cloth-trimmed seats.

There are two versions of the Super Snipe — a saloon and the newer touring limousine. The latter has a power-operated sliding glass panel between the driving seat and rear compartment and is designed as a car for business activities.

The seating is arranged for a maximum of six persons and the equipment is in the traditional Humber style of excellence, with detailed attention to the passengers' comfort and convenience.