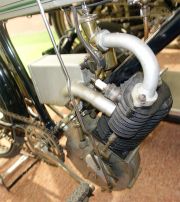 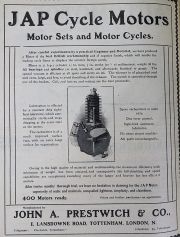 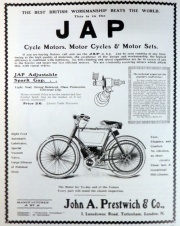 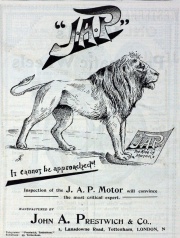 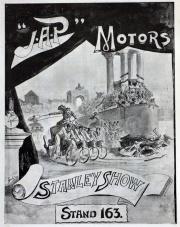 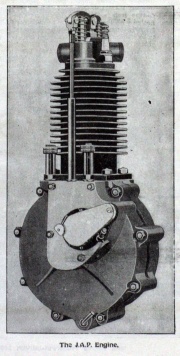 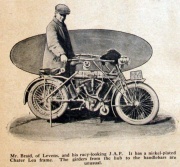 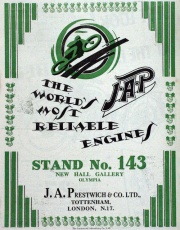 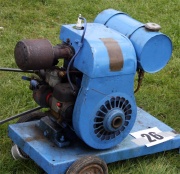 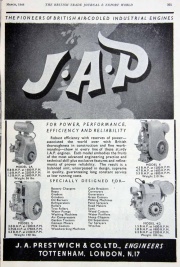 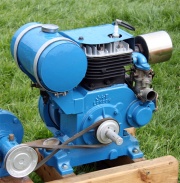 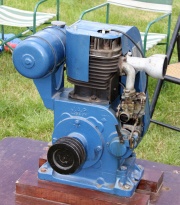 J.99 aeroengine based on the Aeronca E.113 model. Exhibit at the Shuttleworth Collection. 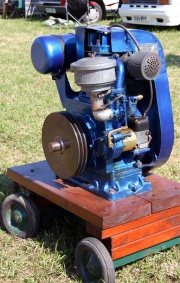 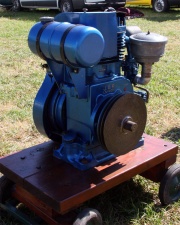 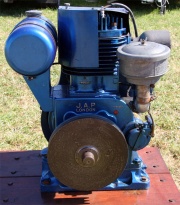 1895 John Alfred Prestwich, an engineer, founded the company J. A. Prestwich and Co when he was twenty one. The company was formed to produce scientific instruments and experimental apparatus and for machines for making and showing cinematograph films.

1902 Designed and built his first engine but it was not produced until 1903.

1903 First complete motorcycle shown at the Stanley Show. It had a BSA frame, sprung forks and a vertically mounted 3.5hp ohv engine. A single push-rod opened both valves, and the cam had track to pull and push as required. There was also a lightweight model fitted with a 2.25hp inclined engine.

1905 News item. Takes first three positions in the Isle of Man elimination trials. 1st: Ariel (Campbell). 2nd Matchless (Collier). 3rd JAP (Franklin). All bikes used the twin-cylinder engine. Also A. E. Lowe wins hill-climbing at Hazlemere and several long-distance trials with same engine. 'Mr. John A. Prestwich, the designer and maker of these successful engines (which now represent Great Britain in the international struggle for the Gordon Bennet Cup). is a son of Mr. Prestwich of Warrington House, and his growing business promises to be one of the staple industries of Tottenham. In addition to motor engines and cars, he is the maker and inventor of the cinematographic cameras and projector in use for show purposes. His machines having taken and exhibited the famous pictures of the 'Fall of Port Arthur' as shown in London.[1]

1906 Made the first overhead-valve V-twin in 1906. Produced a 3.5hp single, a 6hp V-twin and a forecar having an 8hp three-cylinder in-line engine.

1908 The company stopped motorcycle manufacture in order to concentrate on engines. The engines were used in many famous motorcycle marques and other equipment, such as early aircraft, chainsaws, cultivators such as those produced by Rotovators and light rail maintenance trucks. The motorcycle engines were associated with racing success and were still used in speedway bikes well into the 1960s.

Early aircraft were light and basic, and needed a reliable and lightweight engine to power them and JAP motorcycle engines were ideal. J. A. Prestwich at first would purely deliver the same engine to the aircraft manufacturer, allowing them to make local modifications - mainly larger venturi tubes for the carburettor, to allow for greater air intake at altitude.

Val Page worked for JAP before going to Ariel.

Very successful after World War I supplying engines for many manufacturers, but, as more companies developed their own engines, JAP relied heavily on industrial engine sales in the 1930s.

In the late 1920s / early 1930s they produced various heavier engines under licence including those for the UK market for Light Aircraft Ltd's Aeronca light aircraft.

In light of JAP's development of high powered but light engines for speedway, some low volume pre-war car manufacturers, including the Morgan Motor Co and Reliant, used JAP engines to power their vehicles. This use of the JAP extended into motor racing after the Second World War, with most were used in specialist UK lightweight formulas, or more extensively in Formula 3 racing after developments by John Cooper.

After 1945 production was taken over by the Villiers Engineering Co

1962 Engine manufacture moves from Tottenham to Wolverhampton leaving the Tottenham site to concentrate on sub-contract engineering. [8]

1963 September. Announcement of the closure of the Tottenham works. 430 men will be made redundant. [9]

1964 The company was completely absorbed by Villiers just as Villiers itself was to be taken over by Manganese Bronze Holdings. [10]

In its later life, J. A. Prestwich also produced components for other vehicle manufacturers, including the cylinder head for the Lotus Cortina version of Ford's popular car.