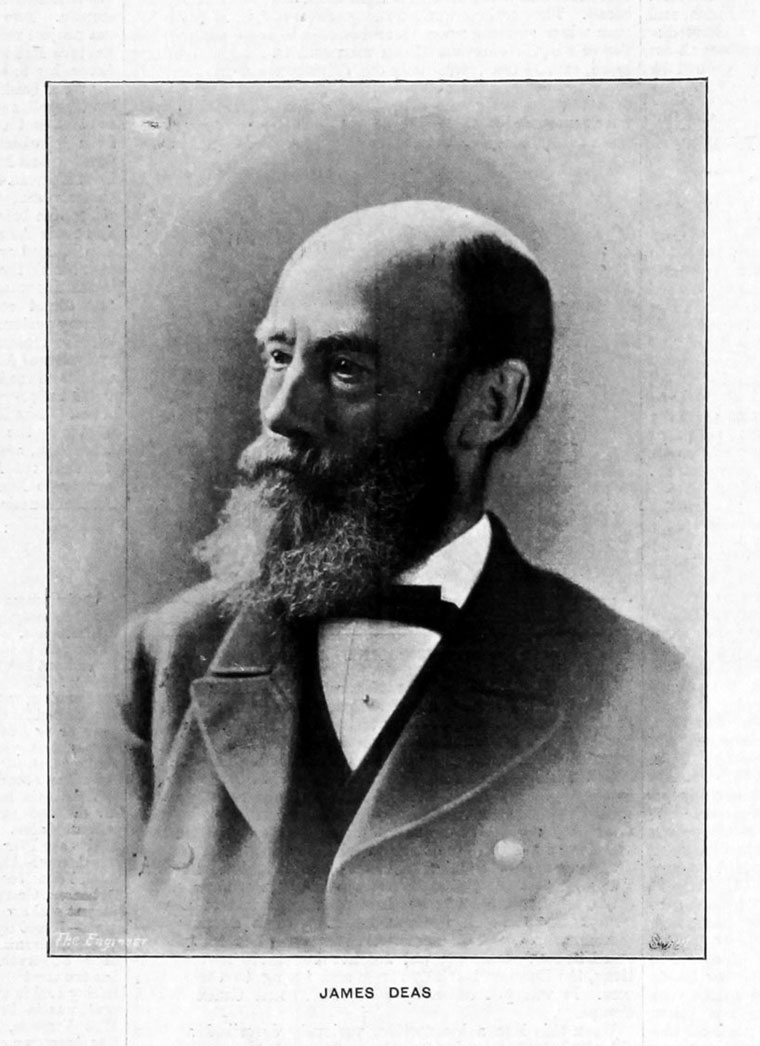 He served an apprenticeship under his father and for three years in the office of John Miller, civil engineer of Edinburgh.

Became Chief engineer to the Edinburgh and Glasgow Railway.

1860, at the age of forty-two, Deas was appointed, in succession to John F. Ure, resident engineer to the Clyde Navigation Trust.

During his 30 years with the Trust he made major developments in the harbour of Glasgow and in the improvement of the river Clyde.

It was on these lines that he commenced his training, serving an apprenticeship with his father.

He was next for three years in the office Mr. John Miller, civil engineer, Edinburgh, and thereafter took port in the construction of various railways in the south and west of Scotland, ultimately becoming chief engineer of the Edinburgh and Glasgow Railway; and, upon the absorption of that concern by the North British Railway, he acted in the same capacity on the western section of the company's system for a short time.

In 1869 he became engineer-in-chief of the Clyde Trust. The magnitude of the work carried out under his direction during the past thirty years can he seen from the following figures. The quayage has been increased from 3.18 to 18.5 miles, and the water area from 76 to 209 acres. There were then three shipbuilding yards, and Napier's dock, occupying water frontage where quays now exist. The harbour then terminated barely a mile below Glasgow Bridge; and now it extends westward a mile and a half further, with extensive docks on both sides and the Yorkhill Wharf, where thousands of cattle are landed. The river, as well as the harbour, has been deepened by 5 feet for the 18 miles under the jurisdiction of the Trustees.

By removing the Elderslie rock from the channel of the river there is now 20 feet as low and 30.5 feet at high water above the rock, instead of only 8 feet in 1869.

In addition to increasing the dock accommodation he built passenger wharves at Govan and cattle wharves at Shieldhall. When he became engineer there were only two cross-river ferries, now there are about fifteen; and in addition he had a large part in organising the service of penny steamers up and down the harbour. An extensive system of railway sidings has been laid throughout the harbour. When he became engineer there were no cranes for shippers' use — there were only five possessed by the Clyde Trust — now they are dotted all over the harbour, and range up to 130 tons, of which lifting power there are two.

During the same period the revenue of the Trust has increased from £150,000 to £428,000, and the vessels frequenting the harbour exceed four million tons annually. At the Edinburgh Meeting of the Institution he contributed a Paper on the Improvement of the Clyde Navigation above Port Glasgow;* and at the Glasgow Meeting he read a Paper on the Clyde Navigation,t which gives an interesting description of the docks, quays, and appliances used on their construction. He was joint inventor with Mr. Nairn, also of the Clyde Trust, of a digger which was largely used in connection with excavating the interior of the triple cylinder of concrete introduced by him for quay walls. Another invention of his was a railway switch-box.

His death occurred suddenly from an affection of the heart while lunching in a Glasgow restaurant on 29th December 1899, at the age of seventy-two.

He became a Member of this Institution in 1887.