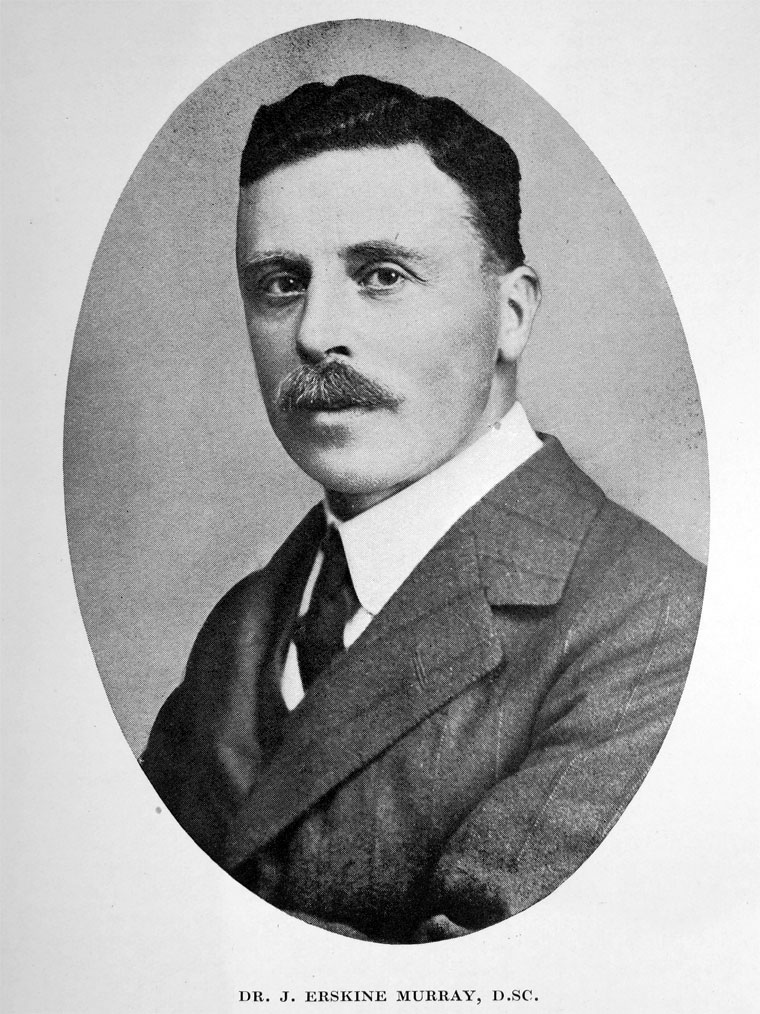 Dr. James Robert Erskine-Murray D.Sc., M.I.E.E. (1868-1927) was a protégé of Lord Kelvin, one of Marconi's first engineers and a partner at Clark Forde, Taylor and Erskine-Murray. After service in the RAF in the First World War, he was Experimental Engineer at H.M. Signal School, Portsmouth.

1896-1898: Assistant Professor of Physics and Electrical Engineering at the Heriot-Watt College.[4]

1897: Proposed by Lord Kelvin among others, Erskine-Murray was elected Fellow of the Royal Society of Edinburgh (F.R.S.E.) on the 1st February 1897.[5]

1898: In November 1898, Erskine-Murray resigned from Heriot-Watt to become Marconi's principal experimental assistant, working initially at the Haven Hotel near Poole. [6]

1899: Left the Haven experimental station in July 1899 to take charge of technical work at the Hall Street factory in Chelmsford. [8]

1900: Became lecturer and demonstrator in physics and electrical engineering at University College, Nottingham.[9]

1907-1911: Lecturer on radio telegraphy at the Northampton Institute, Clerkenwell.[9]

1913: Became a partner in the firm of Clark Forde, Taylor and Erskine-Murray, consulting engineers.[9]

1914-18. Served as Lieut.-Commander during the War with the Royal Air Force in charge of the design of wireless instruments and of experimental work till May, 1922. [4]

1920: On the 21st December, Erskine-Murray succeeded Campbell Swinton to become the second President of the London Wireless Society.[12]

Erskine-Murray was the author of the standard textbook on wireless in the period running up to and during the Great War. A Handbook of Wireless Telegraphy: its Theory and Practice for the use of electrical engineers, students, and operators went through five editions in the period from 1907 to 1914. He also wrote Wireless Telephones and how they work. (1910, 1911 and 1923) and translated Ernst Ruhmer's 1907 classic Drahtlose Telephonie from the German into English.

Dr. James Robert Erskine-Murray, F.R.S.E., who died at Portsmouth on Saturday, at the age of 58, played a considerable part in the development of wireless communication, especially in its early days. After studying at Glasgow under Kelvin and at Cambridge under Sir J. J. Thomson he became experimental assistant to Mr. Marconi in 1898, and took part in the invention of many wireless telegraph devices. Subsequently he was for some years engaged in teaching and later, in conjunction with a lectureship at the Northampton Institute, he took up consulting work in London, as a partner in the firm of Clarke, Forde, Taylor and Erskine-Murray. As an engineer who was independent of the numerous commercial enterprises which were developing wireless communication before the war, he played a useful part in investigating and clearing up a number of problems, and was one of the earliest to deal with the important question of atmospherics. He was also the author of a well-written “ Handbook of Wireless Telegraphy,” and of “ Wireless Telephones ” ; and was responsible, both for the translation of Ruhmers “ Wireless Telephony,” and for numerous articles on wireless and other subjects in the technical press. These included a valuable contribution on “ A Direct Experimental Method for the Determination of the Radiation Efficiency and Other Constants of a Wireless Transmitter,” which appeared in the “ Jahrbuch der Drahtlose Telegraphic.”

In 1917, Dr. Erskine-Murray joined the R.N.V.R., and in the same year was given a commission as lieutenant-commander in the Royal Naval Air Service. Advantage was taken of his experience in wireless matters to place the investigation of numerous problems, the solution of which was necessary for the prosecution of the war, under his charge. In 1918 he became Director of Wireless Research and Design at the Air Ministry. He retained this position until 1922, having in the meantime been promoted to major. Subsequently, he was appointed Experimental Engineer at H.M. Naval Signal School, Portsmouth, a position he held at the time of his death.

Dr. Erskine-Murray was well-known as a lecturer. One of his most interesting efforts in this field took place shortly after the war, when he gave a demonstration of communication by wireless telephony between an aeroplane in flight and the lecture theatre of the Institution of Electrical Engineers. This was a war-time development, which at the period was generally unknown to the public.

Dr. Erskine-Murray was a Fellow of the Royal Society of Edinburgh, and of the Institute of Physics, and a member of the Institution of Electrical Engineers. He was also a past-president of the Wireless Society of London."