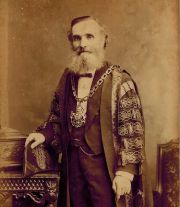 1823 October 28th. Born at Berwick-upon-Tweed the son of Andrew Farmer and his wife Isabella Shillinglaw

We announce with regret the death of Sir James Farmer, of Salford, which occurred at 11 30 on Friday night, at his residence, Lytham, after a lingering illness. The deceased gentleman was life-long resident in the borough of Salford, and was the founder of the firm of James Farmer and Sons, engineers and millwrights, Adelphi-street, which has been conducted during the later years of Sir James's life by his sons, Mr. Andrew W. Farmer and Mr. James S. Farmer. The leading manufactures of the firm are bleaching and cotton spinning and weaving machinery, but in recent years they have largely developed a new department in the production of machinery and apparatus for sewage utilisation and disposal.

Although always of a quiet and unostentatious disposition, Sir James was induced to enter the Corporation of Salford so far back as 1864, and continued a member until his decease. From the first year of his connection with the Salford Corporation he began to take great interest in the water supply of the borough, his engineering training giving him special knowledge on the subject. In November, 1864, immediately after his election, he was placed on the Water Committee, and two years later he was elected chairman of the committee, which important position he continued to occupy during the whole period of his membership of the Council. Sir James also took an active part in connection with the fire brigade of the borough, to whose efficient equipment he paid great attention. For many years he was chairman of the Fire Brigade Sub-Committee. After serving as councillor for 16 years, he was raised to the dignity of alderman in November, 1880, and was assigned to Regent Ward. He succeeded Alderman Makinson as Mayor of the borough in November, 1885, and held that office for two years. During the term of his second Mayoralty the Jubilee of Queen Victoria's reign was celebrated, and in the loyal borough of Salford the event was made the occasion of extensive rejoicings, in which the Mayor took the lead.

Salford is one of the largest boroughs in the kingdom, notwithstanding that it is overshadowed by its immense neighbour, it received due recognition in the distribution of the Jubilee honours, and, the morning of the anniversary the Queen's accession, the then Mr. Alderman Farmer received intimation that her Majesty had been pleased to confer upon him the dignity of knighthood. On May 4th, 1887, the borough was gaily decorated on the occasion of the visit of the Prince and Princess of Wales, who came to Manchester to open the Royal Jubilee Exhibition at Old Trafford. At Peel Park Alderman Farmer presented to the Prince of Wales an address of welcome. Sir James Farmer was a staunch Conservative, although, being of a retiring disposition, he never sought office or position of prominence in the organisations of his party. He was a member of the Congregationalist denomination. The deceased was a justice of the peace for the borough. He had been a widower for many years.

Mr. J. Makinson, the stipendiary magistrate at Salford, on Saturday morning made a touching reference to the death of Sir Farmer at the conclusion of the business of the court.
The funeral of Sir James Farmer took place in Salford Cemetery on Wednesday noon......'