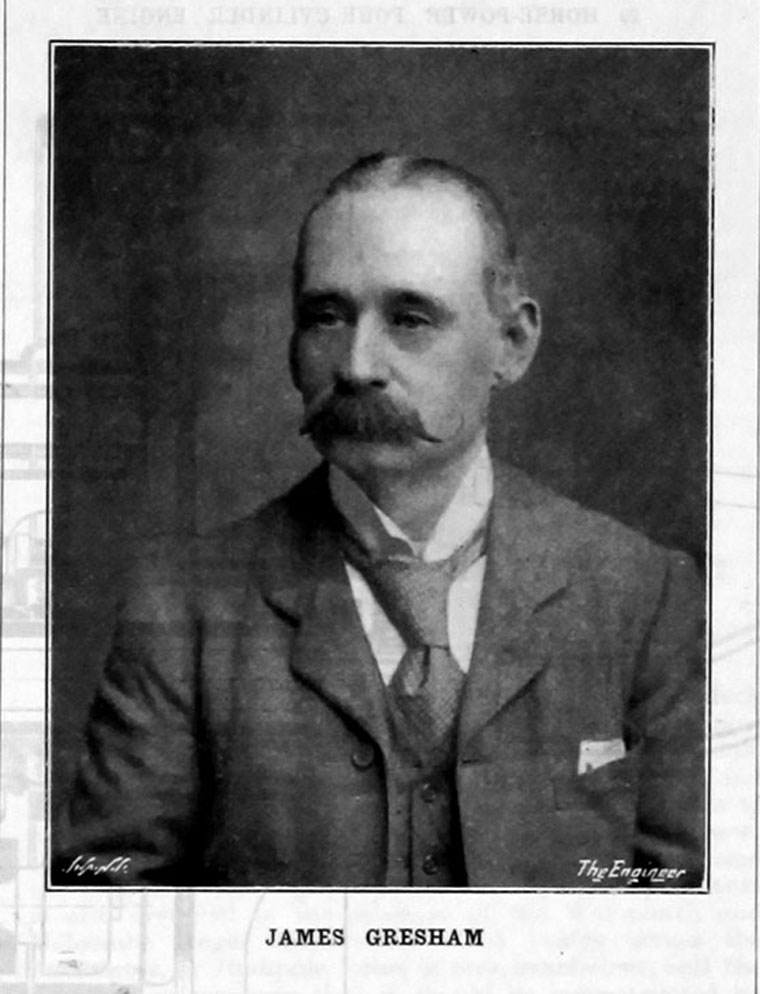 1860 One of Henri Giffard's new steam injectors arrived at Sharp, Stewart and Co's works in Manchester but the company did not want to take up the injector, continuing to make plunger pumps. James Gresham, a draughtsman at the company, saw the potential

1866 Mr. Gresham, recorded as being of Atlas Works, Manchester, gained a patent for improvement in injectors for steam engines, to deal with problems in charging them[1]

1866 Having left Sharp Stewart, he formed a partnership with Mr Heron, a wire mattress manufacturer, who added this product to his existing business[2]

1875 J. S. Heron left the company in April due to ill health. The firm became Gresham and Craven, engineers of Salford.

James Gresham was a patron of the arts.

JAMES GRESHAM was born at Newark-on-Trent on 27th December 1836.

He was educated at Newark Grammar School, and studied Art at South Kensington.

In 1857 he went to Manchester as sketching clerk to the Art Treasures Exhibition held in Manchester in that year, and on the termination of the Exhibition he took a situation as draughtsman with Messrs. Sharp, Stewart and Co.

In 1865 he left Messrs. Sharp, Stewart and Co., and went to London as Manager to the North London Iron Works.

In the following year he returned again to Manchester, and commenced business for himself in Blackfriars Street, as manufacturer of injectors, sewing- machines, etc.

In 1869 he took into partnership Mr. T. Craven and Mr. Heron, the latter dying in 1880, the firm since being known as Gresham and Craven.

His early inventions were in connexion with domestic sewing-machines, machinery for winding yarn or thread, and injectors for feeding steam-boilers. Subsequently he devoted most of his time to perfecting the injector and devising numerous improvements in connexion with continuous brakes for railway vehicles.

His death took place at Ashton-on-Mersey, near Manchester, on 13th January 1914, at the age of seventy-seven.

He was elected a Member of this Institution in 1880.