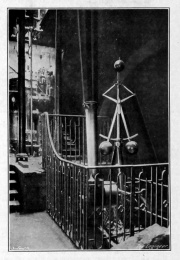 1821. Beam Engine built by James Watt in 1821 and in working order until 1920 when it was demolished by Bristol Distilling Co.See Note Below

1769 February 5th. Born on at Glasgow, the son of the engineer James Watt

James Watt first went to the Rev. Henry Pickering's school at Winson Green, Birmingham, like Matthew Robinson Boulton, with whom he later took over the direction of Boulton and Watt

1751 Age 15. He went to work at John Wilkinson's Bersham Ironworks, near Wrexham.

He was then sent off to France en route to Geneva to study the classics, history, science, mathematics, drawing, and French.

1788 Watt returned to England and joined the firm of Taylor and Maxwell, fustian manufacturers, in Manchester.

1794 Watt became increasingly useful to Boulton and Watt. With Matthew Robinson Boulton he investigated and prosecuted pirates of his father's patents, he promoted the copying machine, he introduced the principle of ‘rationalization’ into the construction of Soho foundry in 1796, he recruited founders from Wilkinson's works, and he took over the main direction of the steam-engine company.

In 1817 Watt purchased Bell's PS Caledonia and refitted her with two 14 hp Boulton and Watt engines. He then took the ship to the Netherlands and ascended the Rhine as far as Koblenz. It is claimed that this was the first steam crossing of the channel.

As a result of this and other experiments, the manufacture of marine engines increased in his firm, culminating in HMS James Watt (1853), fitted with Soho engines.

1820 Watt leased the French Wall's mill to Henry Downing, lending him the money necessary to convert it into an ironworks [2].

1829 Downing went bankrupt. Watt then leased the property to the Bordesley Steel Co, which was still running it in the mid 1830s [3].

Mid 1830s James Watt (Junior) took the French Wall's Works into his own hands and ran it in conjunction with the Soho Foundry, though as a separate concern, until old age forced him to give it up in 1842 [4].

The French Walls works provided the Soho Foundry with boiler plates and uses (semi-finished forgings for engines) as well as turning out merchant iron and steel. Scrap from the Foundry was returned to the French Wall's for reworking [5].

Watt finished his days in grand style at Aston Hall, having become a pillar of society as well as something of a dandy.