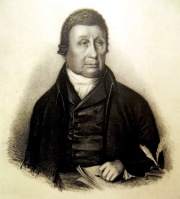 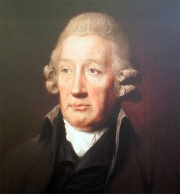 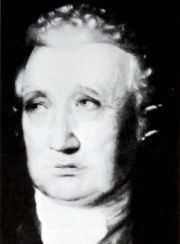 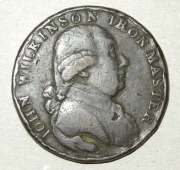 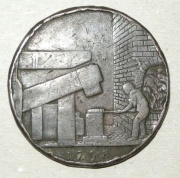 John "Iron-Mad" Wilkinson (1728–1808) was an English industrialist who suggested the use of cast iron for many roles where other materials had previously been used.

1728 John Wilkinson was born in Clifton, Cumberland, the son of Isaac Wilkinson, who was then the potfounder at the blast furnace there, one of the first to use coke instead of charcoal, a method that was pioneered by Abraham Darby.

John and his brother William, who was 17 years younger, were raised in a non-conformist Presbyterian family. His sister Mary married another non-conformist, Joseph Priestley in 1762. Priestley also played a role in educating John's younger brother, William.

c.1750 John Wilkinson was in partnership with his brother and father at an ironworks at Cartmel, near Lancaster; they used the peat and turf of the district for fuel, and to get a proper supply of this to the furnace John designed a short canal which was cut through the Turbary, and he constructed an iron boat for use on the canal[1]

John probably worked with his father in his foundry (which included a blast furnace) at Bersham in Denbighshire, but in the late 1750s, he established, with partners, ironworks at Willey, near Broseley in Shropshire.

1755 Married Anne Mawdsley and moved to Wrexham. She died a year later and left him sufficent money to set up in business

1757 He took over the ironworks at Willey, Shropshire

In 1766 aged 38 he established the Bradley Works in Bilston parish, near Wolverhampton. This became his largest and most successful enterprise, and was the site of extensive experiments in getting raw coal to substitute for coke in the production of cast iron. At its peak, it included a number of blast furnaces, a brick works, potteries, glass works, and rolling mills, all adjacent to a wharf on the Shropshire canal.

1774 Among his products were cannon. These were difficult to cast as the presence of 'honeycombs' (blow holes) was unacceptable to the Board of Ordnance. Traditionally cannon had been cast with a core, but Wilkinson in 1774 proposed casting them solid and boring a barrel. Cannon had long been bored to remove imperfections in the casting, but casting solid made them a much better.

1775 Wilkinson also invented and patented a new kind of boring machine, where the cannon was turned against a fixed tool (rather than vice versa), which made the bore more accurate. Unfortunately for him, his invention was not novel, and his patent was eventually repealed.

Another important product was steam engine cylinders. Because his cylinders were so accurately bored, he became the main supplier of these for Boulton and Watt, and also licensed steam engines from them to assist in his ironworks. He also encouraged them to provide steam engines to operate forges, and rotary engines for driving mills, the first rotary engine being installed at Bradley in 1783.

Unknown to Boulton and Watt, Wilkinson was also producing complete "pirated" engines. This was leaked to them by Wilkinson's younger brother, William, after he returned from Europe in the late 1780s and the two had had an argument over their partnership in certain works. Boulton and Watt sued him. As their steam engine patent would soon expire, they established their own Soho Foundry at Smethwick so as to sell complete engines, rather than merely designing them and collecting a royalty.

In 1779 aged 51, Wilkinson was also a major shareholder in the Iron Bridge, encouraging the other shareholders to make the bridge entirely from iron, though it was Abraham Darby (1750-1789), rather than he, who actually built it.

In 1787 aged 59 he launched his next iron barge called 'Trial' on the Severn, having been constructed in Broseley (see below). He patented several other inventions.

1789 'Mr. John Wilkinson, the Iron Master, covered his house, in the North, with copper, ten or twelve years ago, and, determined to try how far the water might prove prejudicial to poultry, he contrived pipes to convey all the water from his roof into his poultry yard, depriving it, at the same time, of any other water, except in summer, when there was no rain. This he has continued ever since: his poultry never suffered in the least.' [2]

By 1796, when he was 68, he was producing about one eighth of Britain's cast iron. He became a titan, and very wealthy, and somewhat eccentric.

His "iron madness" reached a peak in the 1790s, when he had almost everything around him made of iron, even several coffins and a massive obelisk to mark his grave.

When he was in his seventies, his mistress Mary Ann Lewis, a maid at his estate in Brymbo, gave birth to his only children, a boy and two girls.

He left a very large estate in his will (more than ₤130,000), which he intended to make his three children the principal heirs, with executors to manage the estate for the children. It was largely dissipated by lawsuits and poor management by 1828. His corpse in the iron coffin was moved several times over the next decades, and is now lost.

He supplied the iron pipes used to build the Paris water supply.

1787 'Birmingham, July 28. We have the pleasure to mention the following instance of the increasing manufacture and opulence concerned in the iron trade in this kingdom. A few days ago a boat built with English iron, by J. Wilkinson, Esq. of Bradley-Forge, came up our canal to this town, loaded with 22 tons 15 hundred weight its own metal, &c. &c. It is nearly of equal dimensions with the other boats employed upon the canal, being 70 feet long, and 6 feet 8½ inches wide. The thickness of the plates with which it is made is about 5-16ths, and is put together with rivets, like copper or fire-engine boilers; but the stern-posts are wood, and the gunwhale is lined with, and the beams are made of elm planks. Her weight is about 8 tons; she will carry in deep water upwards of 32 tons, and when light she draws about the same as a common wooden boat, viz. eight or nine inches of water.

This not the only experiment of building with metal instead of wood. The ingenious Mr.Stalkouth, shipbuilder in the river Thames, and author of the valuable work, entitled "Naval Architecture," is now building a vessel, whose bottom is to be entirely of copper, without any planking. This is an experiment made at the instance of a Copper Company, and there is reason to believe that the essay will be completely successful; and that for a certain class of vessels will be accompanied with very great advantages.'[3]

Note: There is a challenge to the claim of priority: 'The iron boat lately built by the direction of an English gentleman, is not without a precedent even in this kingdom, as about five years since one of a similar kind was constructed at the iron mills near Lucan, and employed in carrying the fabrics manufactured there to this city [Dublin]. It may seem somewhat strange that iron should swim, but the specific gravity of water being in proportion to a solid or cubical inch to that metal as six to one, if spread out in thinness or flatness as seven to one, must undoubtedly float. ...'[4]