Grace's Guide is the leading source of historical information on industry and manufacturing in Britain. This web publication contains 142,891 pages of information and 228,796 images on early companies, their products and the people who designed and built them.

1870. Horse Rake and Details of Harvesting Machines at the Smithfield Show. 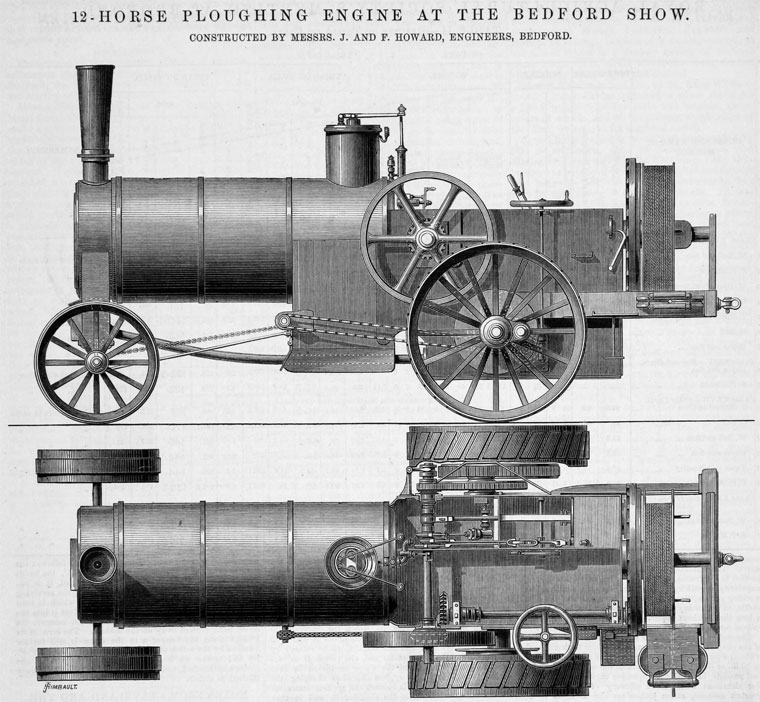 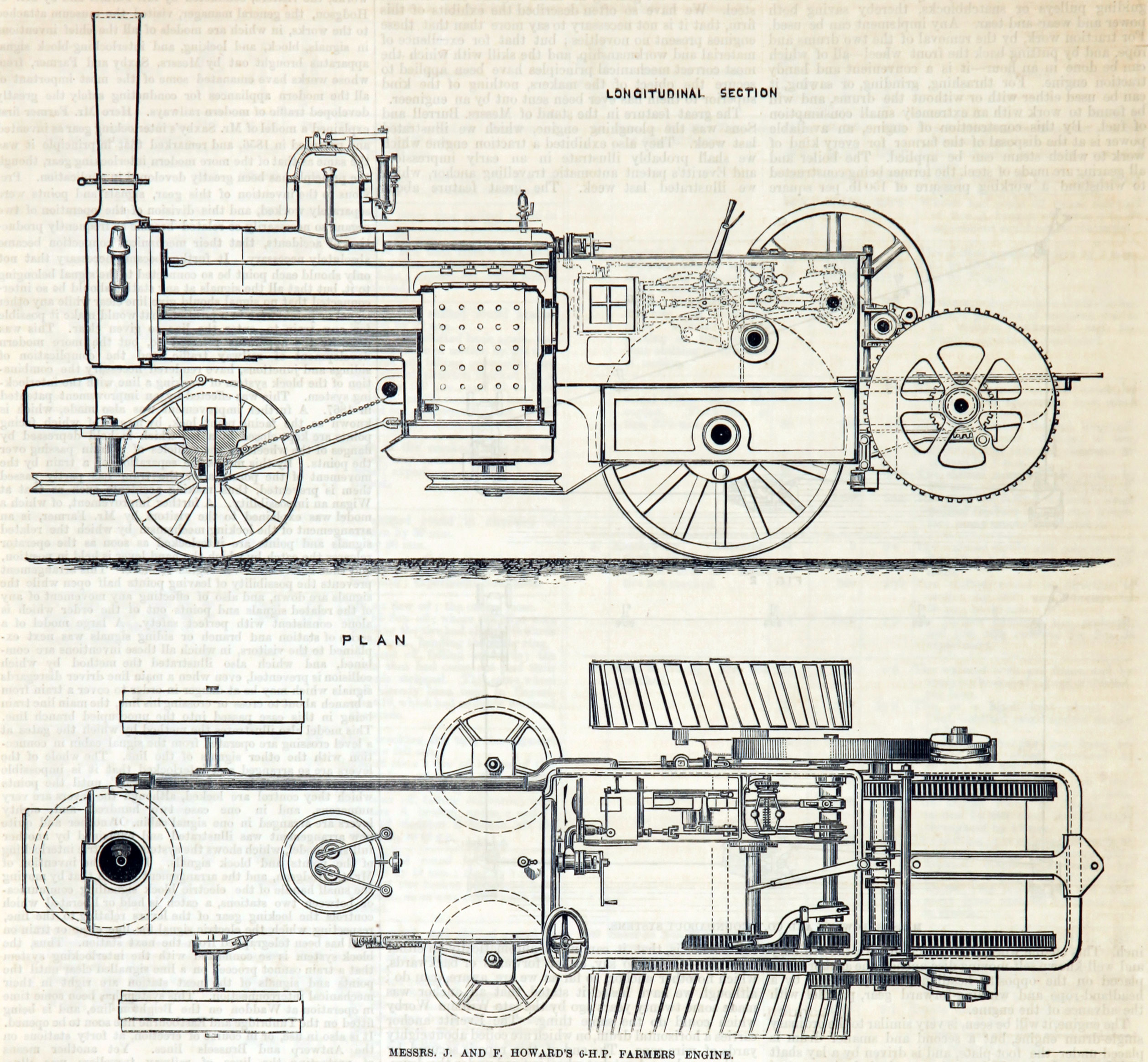 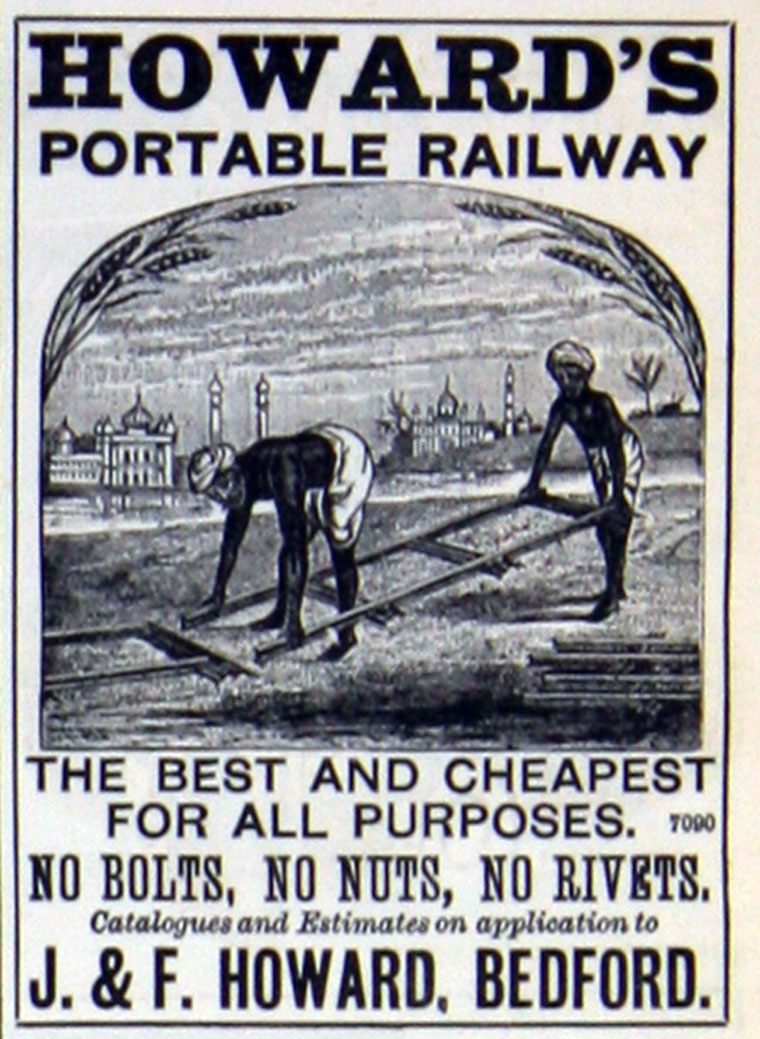 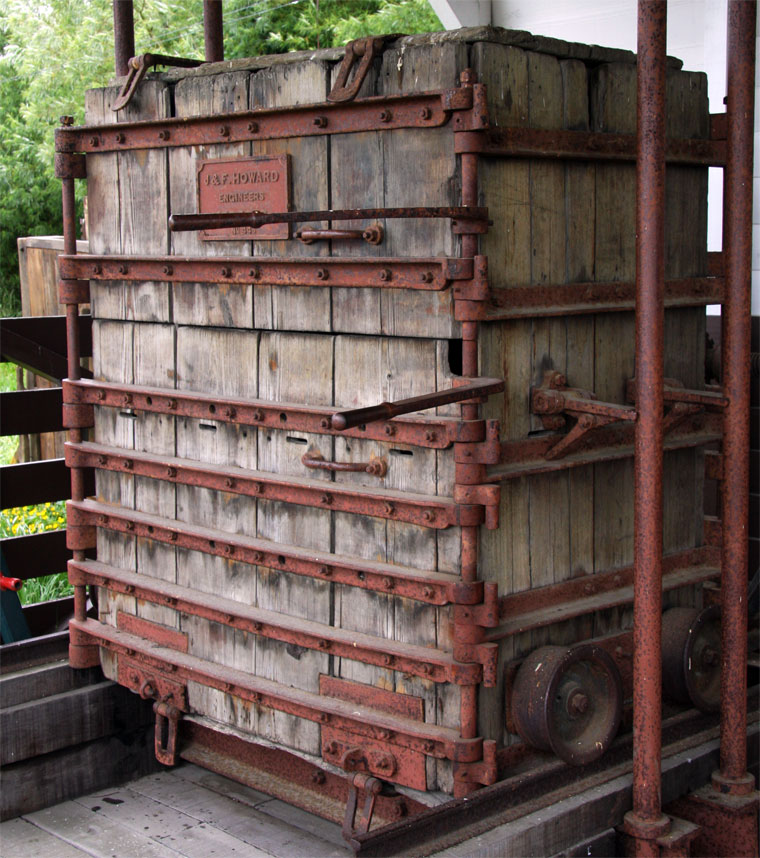 1891. Ladd's Hay and Straw Baling Press at the Doncaster Show. 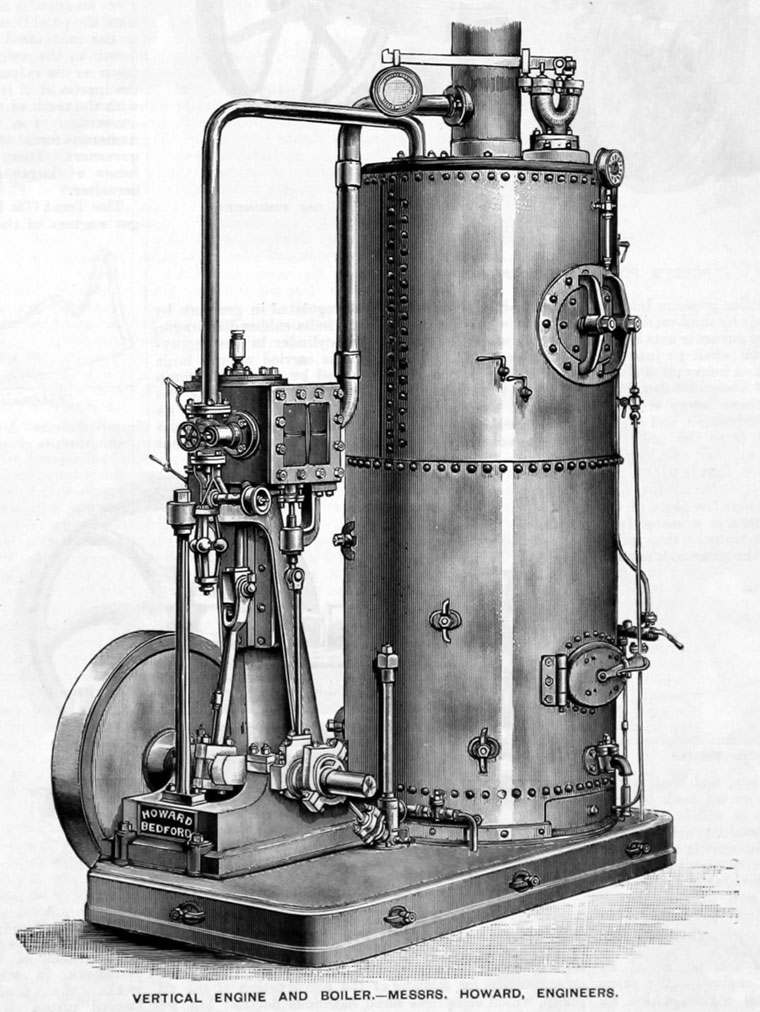 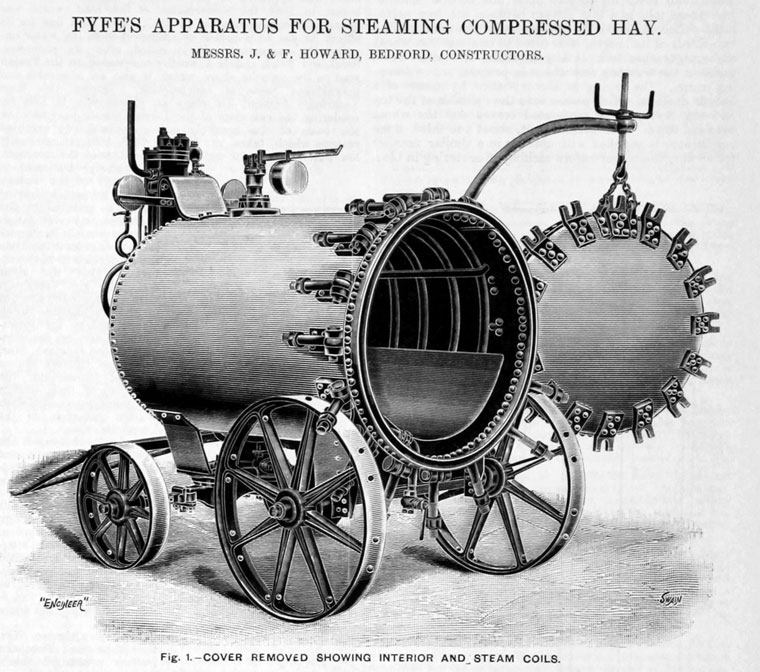 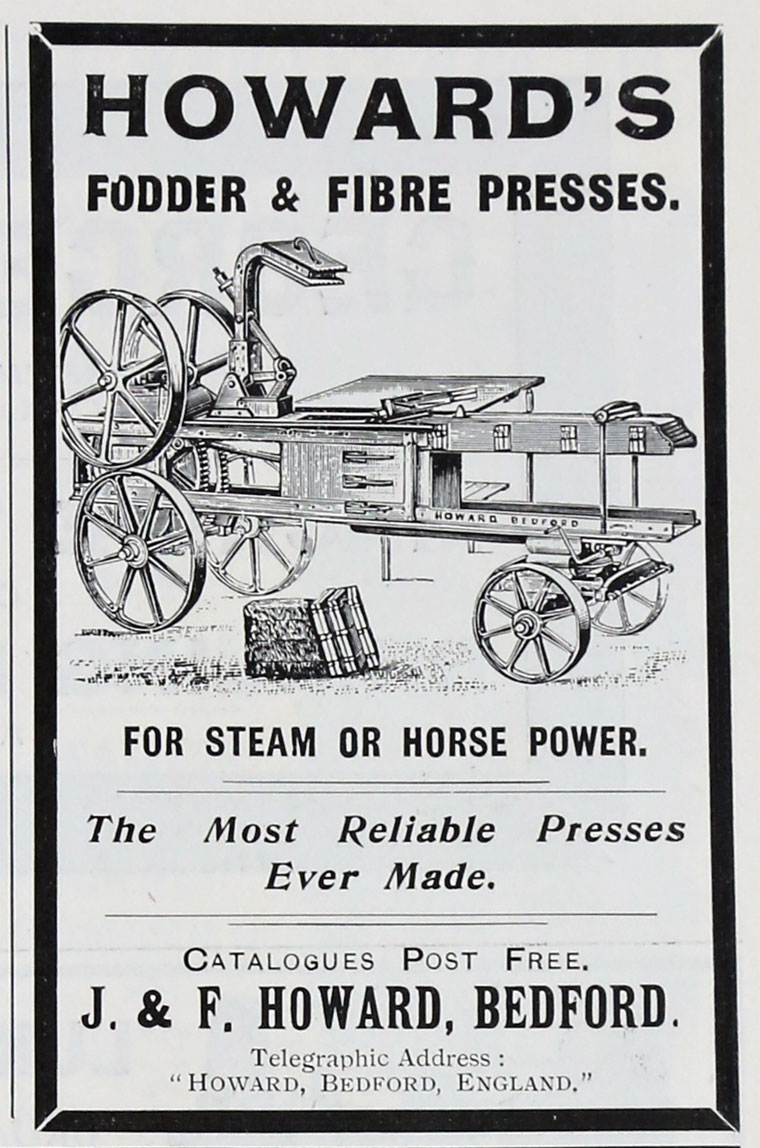 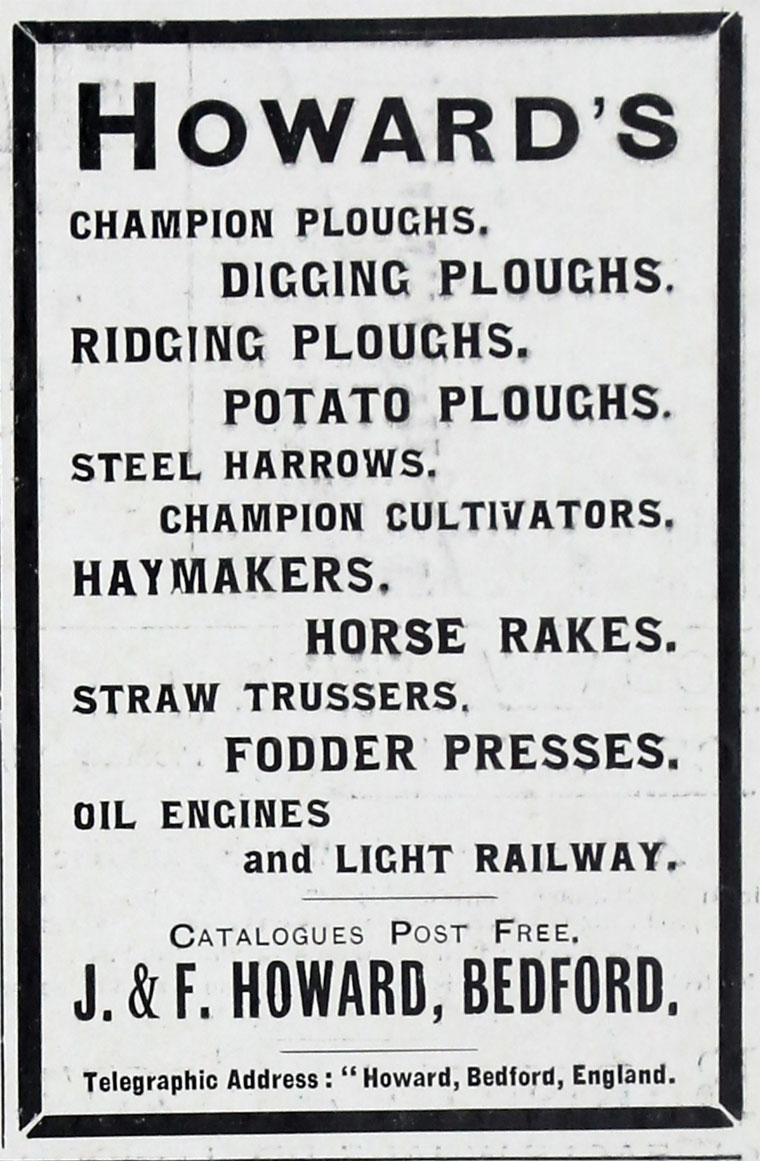 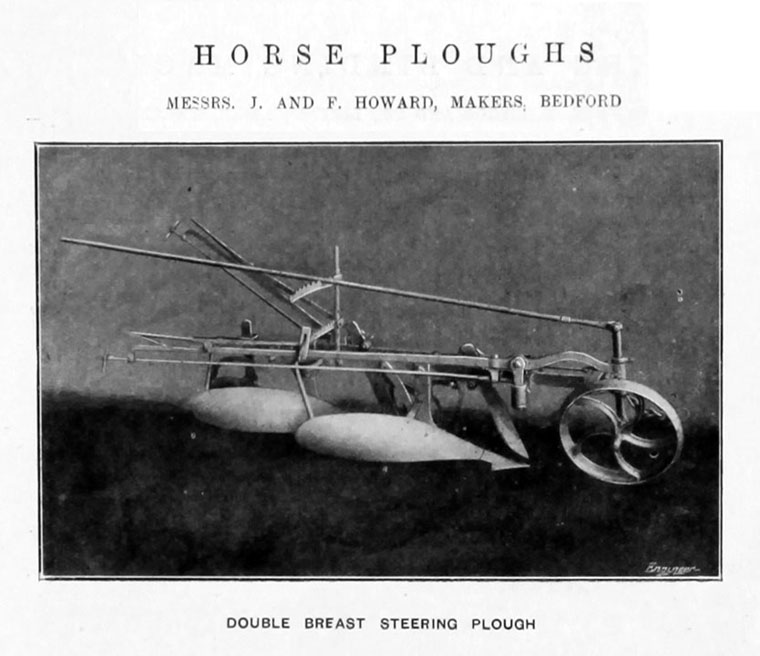 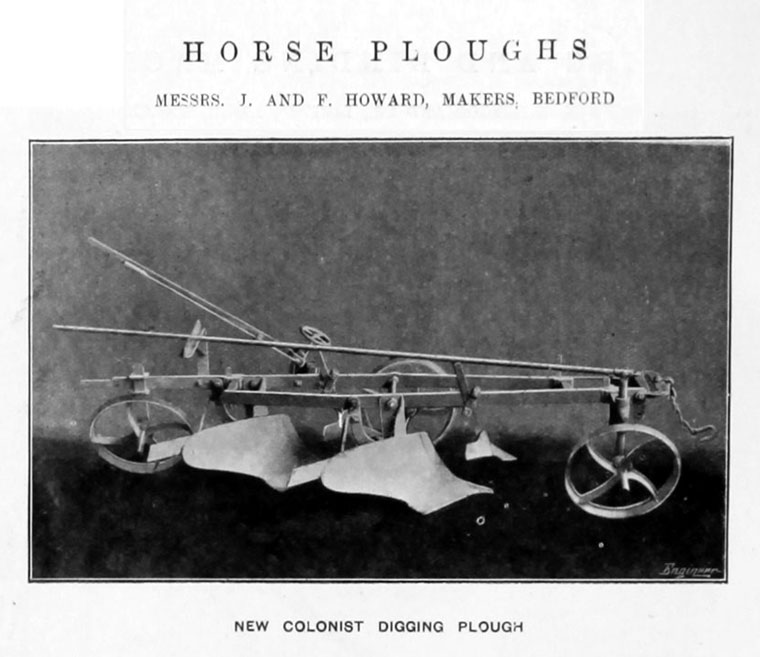 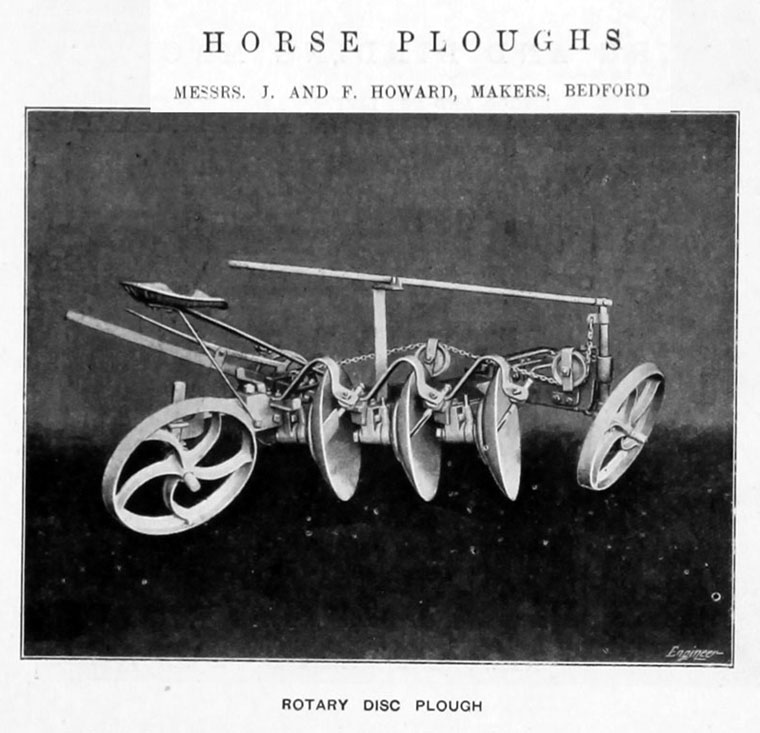 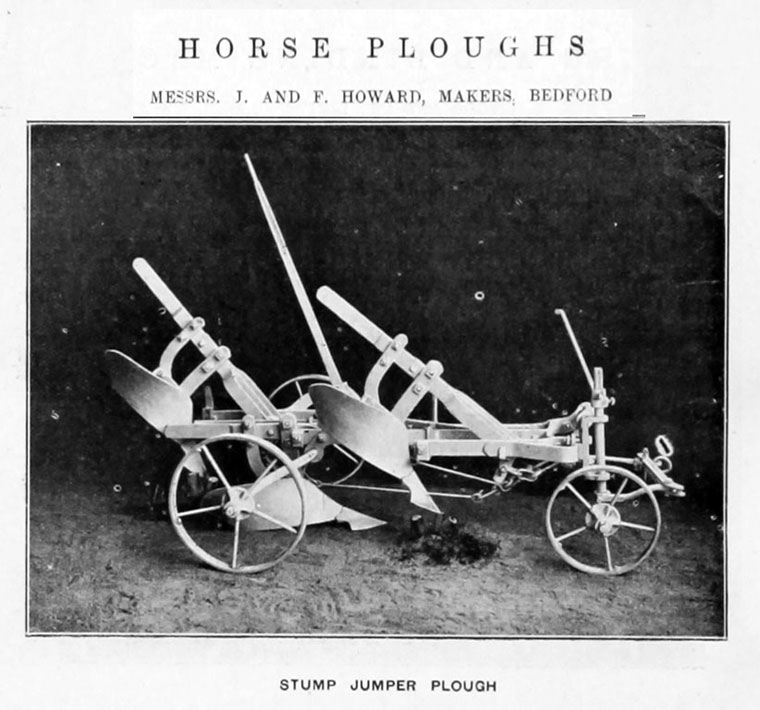 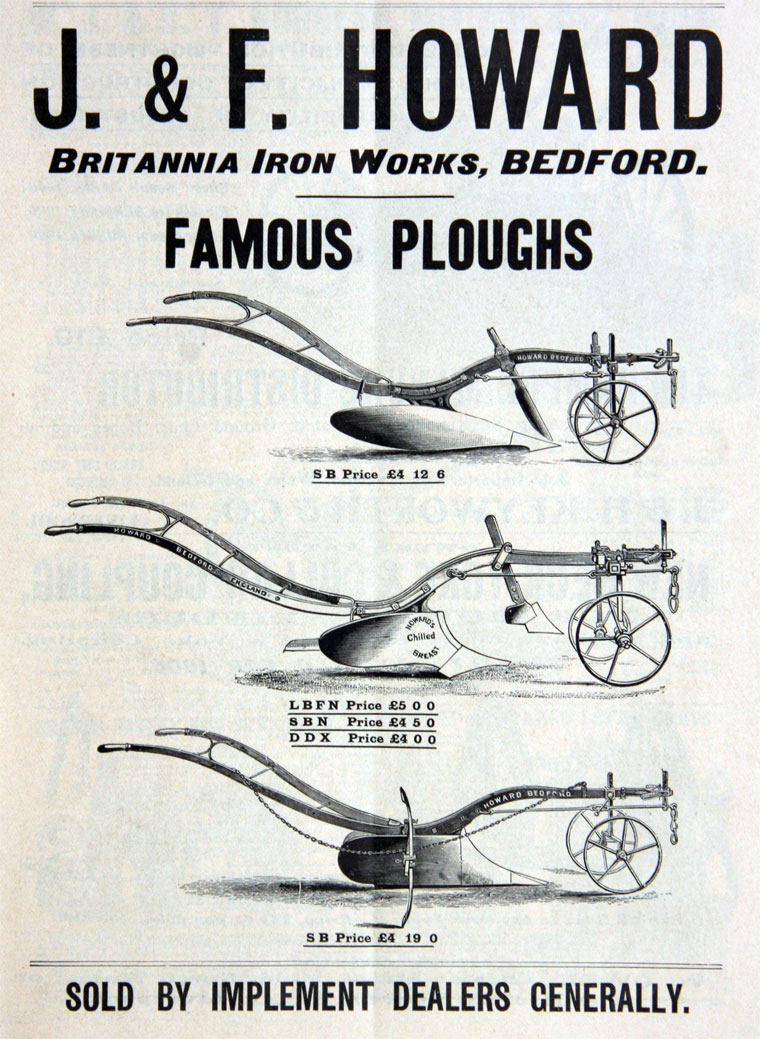 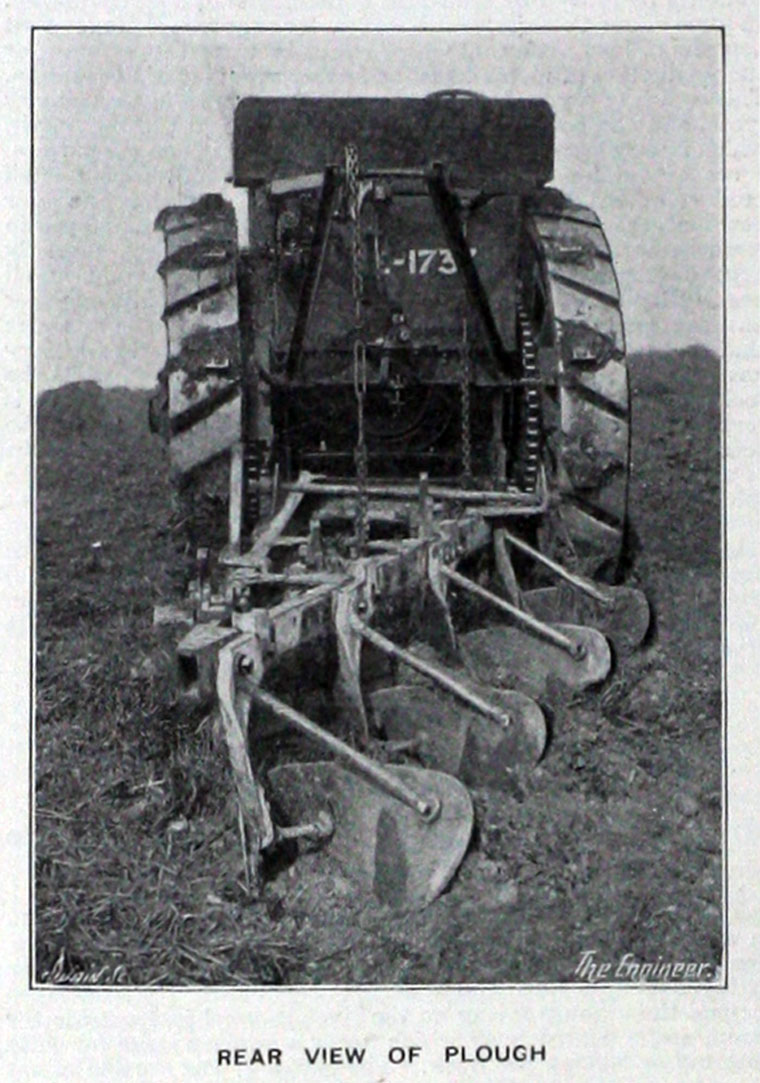 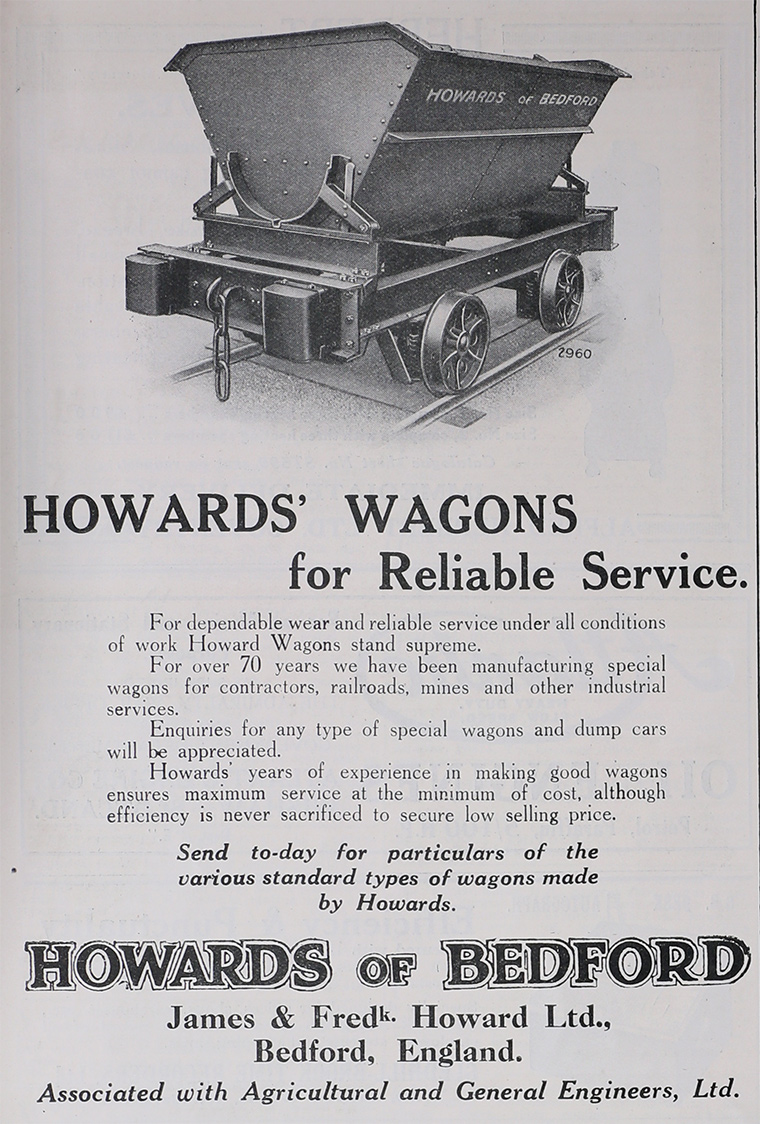 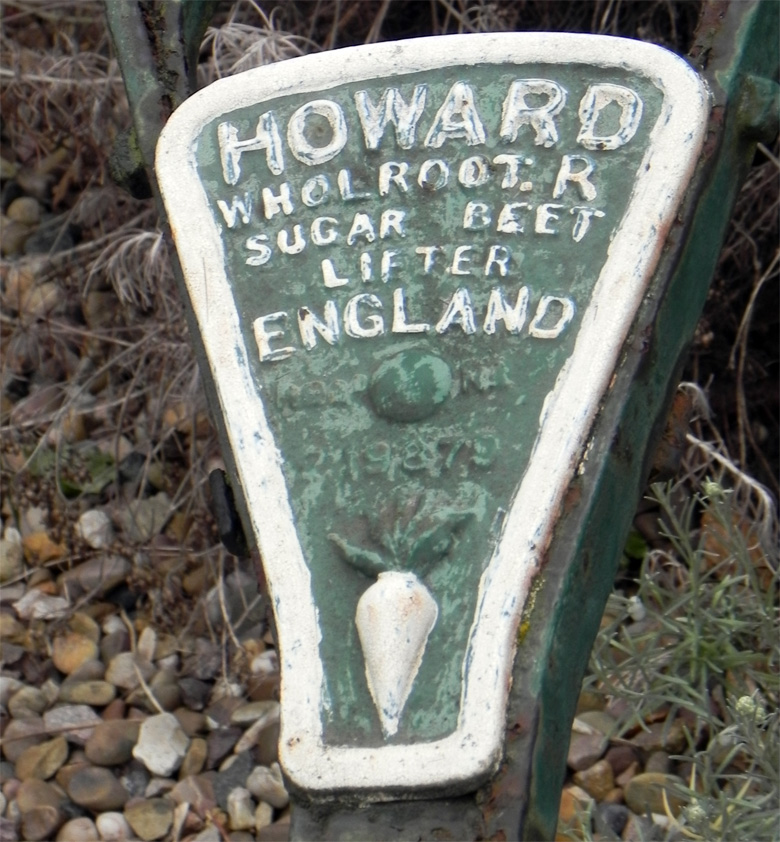 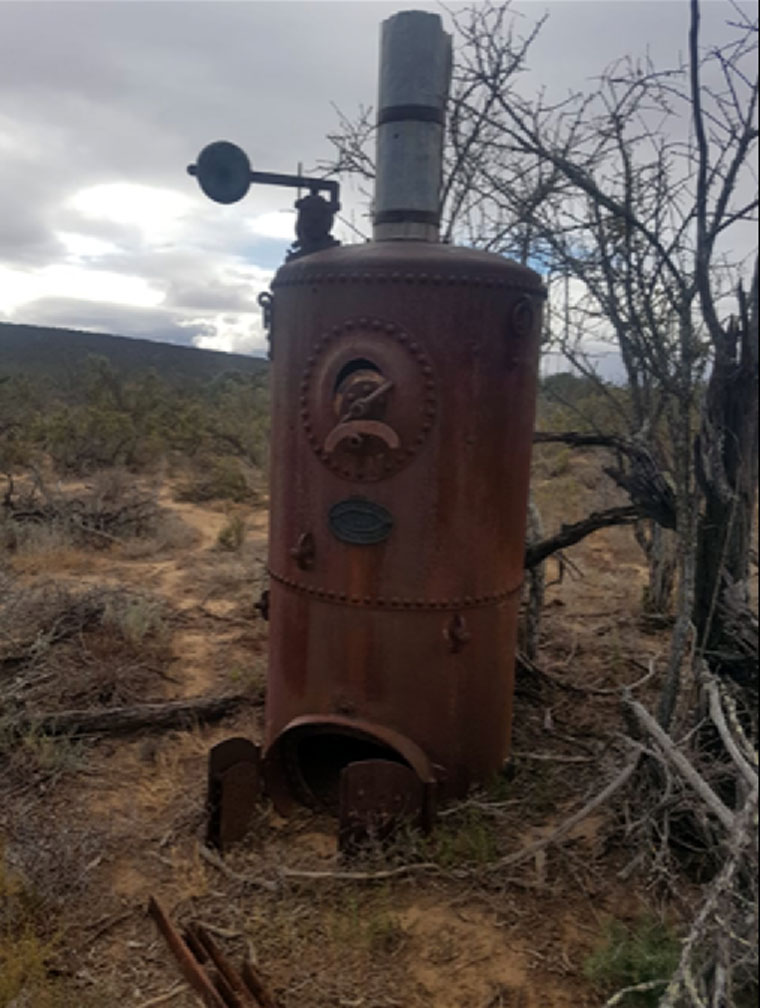 1859 James Howard and Frederick Howard open the Britannia Iron Works in Kempston Road as a manufactory of steel ploughs.

1863 Advert for Howard's Patent Horse Rakes. More than 12,000 in use. James and Frederick Howard of Britannia Iron Works, Bedford. [3]

1866 Details of their patent agricultural engine [4]

1885 Gold medal for invention: Apparatus for trussing and binding straw as it issues from the threshing machine, and a string binding Appleby reaping machine.

1898 'The Britannia Iron Works, the property of Messrs. James and Frederick Howard, occupy an area of about 20 acres. Tramways extend all round the works for the conveyance of materials to and from the different departments, the largest of which is the foundry, a rectangular building, more than 250 feet long, and covering about an acre ; the departments for fitting, forging, finishing, painting, and forwarding are all admirably adapted to their various purposes ; these magnificent works are built in part of the site of Caldwell Priory, founded about he year 1200: the Midland and London and North-Western railways run into the works, and the river Ouse, which is navigable by steamers and barges to the sea flows alongside and combines with the railways to give these works almost unrivalled advantages in the transit of goods'.

1900 Paris Exhibition. Showed an engine (as Howard and Co of Bedford)

1932 F. C. Hibberd and Co company acquired the drawings, patents etc. from the liquidator of James and Frederick Howard Ltd of Bedford who had built internal combustion locos from about 1923 to 1931.