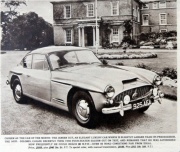 1931 they bought the body works of W. J. Smith and Sons where they worked after the owner's death

1934 renamed the business Jensen Motors. They built customised bodies for standard cars produced by several manufacturers of the day including Morris, Singer, Standard, and Wolseley.

1935/6 The first complete car built by Jensen, the S-type, was powered by a 3.6l Ford V-8 engine[1], the first car in the world to have overdrive fitted as standard[2]

WW2 Jensen concentrated on the war effort and produced components for military vehicles including the turrets for tanks, and on the production of specialised ambulances and fire-engines.

After the war, production of the Jen-Tug thrived and Jensen also produced a new range of JNSN lightweight diesel trucks and chassis which were used for a variety of vehicles including pantechnicons and buses.

1949 The Interceptor used an Austin engine with all-enveloping bodywork.

1952 Jensen's design for a new Austin-based sports-car was rejected by the British Motor Corporation (BMC) in 1952 in favour of a design provided by Donald Healey. Jensen did gain the BMC contract to build the bodies for the resultant Austin-Healey: 100 from 1952 until 1966.

In the late 1950s Jensen were chosen by the British Motor Corporation (BMC) to build the bodies for the four-wheel-drive Austin 'Gypsy'.

1960 Jensen won a contract from Volvo to assemble and finish the bodies for their P1800 coupé. The Pressed Steel Co manufactured the body-shells at their Linwood plant in Scotland and shipped them to Jensen in West Bromwich to be finished, painted and trimmed, before then being shipped to Sweden where Volvo completed the final build.

In the early 1960s Jensen were also involved in the development and production of the Sunbeam 'Tiger'.

By 1966 was part of the Norcros group; both of the brothers had left the company by this time. Italian-designed Interceptor.

1976 Jensen Motors ceased trading in May 1976. Two new companies: Jensen Special Products (JSP Engineering) and Jensen Parts and Service Limited (JP&S) were created to pick up the pieces of Jensen Motors. JSP was created as a specialist engineering and design company from Jensen's development department. JP&S was created to provide parts and service to the existing Jensen customer base. Both JSP and JP&S were bought by a holding company, Britcar Holdings.

1982 JP&S, with the rights to use the Jensen brand names, was sold to Ian Orford.