Grace's Guide is the leading source of historical information on industry and manufacturing in Britain. This web publication contains 148,534 pages of information and 233,960 images on early companies, their products and the people who designed and built them. 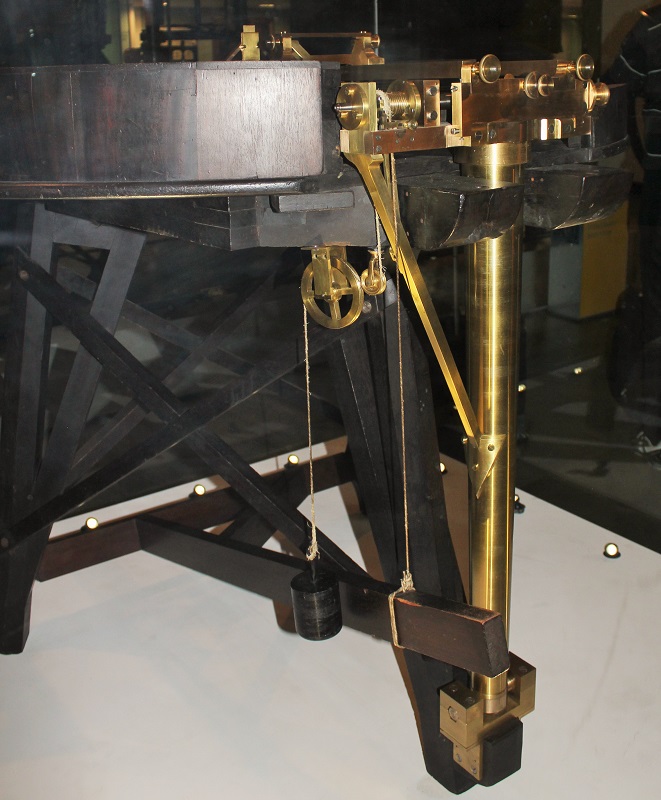 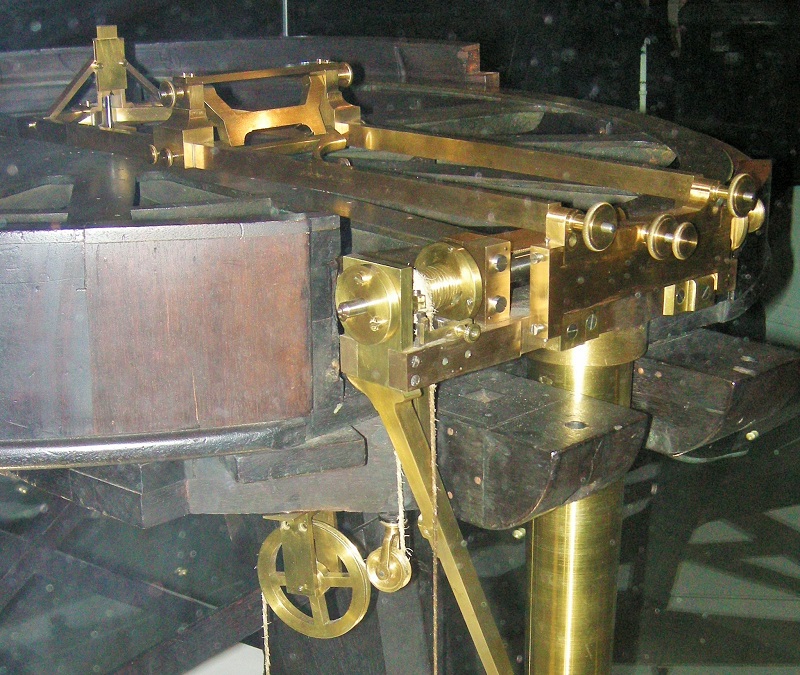 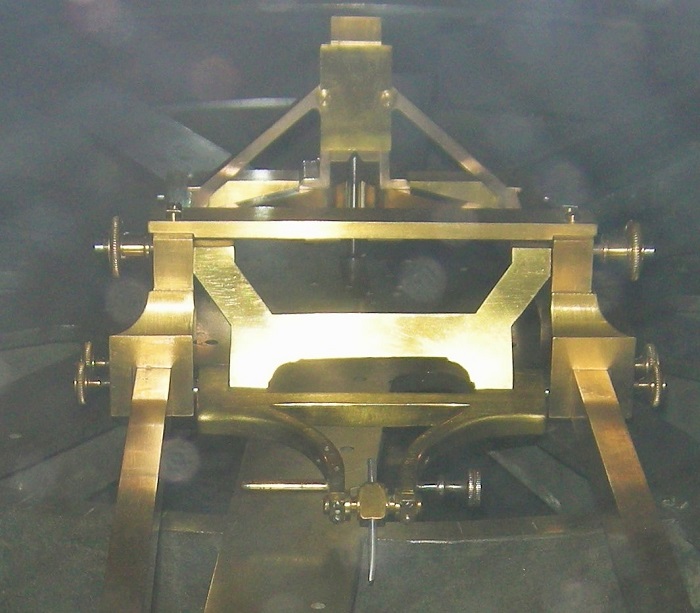 This is a sub-section of Jesse Ramsden

Precisely divided circular scales were of vital importance for instruments used in navigation, surveying and astronomy. Accurate and affordable octants and, later, sextants, were required in large nubers by navigators.

In 1760 the English instrument-maker Jesse Ramsden embarked on the development of machines for graduating circular or part-circular scales. He succeeded in producing highly-regarded machines, and in 1777 he published details which enabled other makers to produce similar dividing engines. As well as providing high standards of accuracy, Ramsden's machine incorporated a pedal-operated mechanism which advanced the rotary table by a fixed increment, speeding up the process of dividing. A sextant could be divided into 10 minute intervals in about half an hour.[1].

Ramsden's first example had a rotary table of 30 inches diameter. His second machine had a much large table of 45 in. diameter, and incorporated a number of improvements. This machine won him an award from the Board of Longitude. As a condition of the reward, Ramsden was required to provide full details of its design and construction, and to teach others to construct and use the machines. Ramsden's account provides a valuable insight into his remarkable appreciation of the principles of precision engineering, and his ability to produce the required result with the simple equipment available at the time. Even though Ramsden described the processes in great detail, the artizans having the skill, expertise, patience and material to replicate his achievement were few indeed.

Ramsden's second machine had a mahogany frame with three legs. The frame supported a heavy wheel, 45 inches diameter, cast in bell metal. Attached to its upper face was a brass ring, cut with 2160 gear teeth. These teeth engaged with a worm on one side of the machine. Turning this worm 6 times rotated the wheel 1 degree. The worm's spindle had a micrometer dial with 60 divisions, each representing 10 seconds rotation of the wheel. The workpiece to be divided was clamped to the arms of the bronze wheel, beneath the graving stylus on its articulated frame. The movable stylus frame was clamped to a pair of brass guide bars of rectangular section (photo S4). The inner end of this frame was located vertically and radially by a pointed pin located exactly at the axis of the rotary table (photo 4, bacground). The outer end of the frame pivoted on the bracket which carried the worm drive. This bracket was attached to a vertical brass tube, pivoted at its lower end near the foot of one of the machine's three mahogany legs (photo S1).

The 45" wheel had a tapered bearing at its centre, and low-friction support was provided by three conical wheels. A wheel is just visible in the centre of photo S3.

For routine graduation, the worm was rotated in fixed increments by depressing a pedal to pull a cord wrapped round the worm's spindle (see photo S1).

Maurice Daumas states that Ramsden's first machine was built in 1766, but it did not satisfy him.[2]). This is confirmed by Morris[3], who states that in about 1766 Ramsden completed his first circular dividing engine, which was superior to all others then existing, but with errors of up to three arc seconds, it did not meet his exacting standards. His second version was completed by mid-1774, and the claimed error was less than 1 second. Daumas states that Ramsden sold the first machine to Bochard de Saron 'after having ensured that its condition had deteriorated so that it was unusable. It appears that this machine was refurbished and modified by Etienne Lenoir (1744-1832) to divide a circle into 400 parts ('metric degrees') in connection with the construction of repeating circles for the Commission du Metre. This machine is currently (2019) on display in the Musée des Arts et Metiers. See photos P1-P5.

The ability to produce equipment of the required accuracy and scale using hand tools is astonishing. Take, for example, the 45-inch diameter circular table, which needed to be truly circular, of a precisely-defined diameter, dead flat on its upper surface and on the supporting ring on the underside, to have an accurately-bored central hole absolutely concentric with the periphery, etc, etc. As far as we know, this had to be done with hand-held tools in a wooden lathe, with limited measuring facilities and no large surface plates to facilitate checking. Machining any spoked wheel readily gives rise to resonance which can badly impair the surface finish, and in this case the type of material cannot have helped the machinist: bell metal. To compound the problems, the casting is likely to have distorted as material was machined off the surfaces.

The National Museum of American History have a circular dividing made by Ramsden in 1775. It had been purchased from Ramsden's successors and went to the USA in 1850. The Philadelphia firm of Knox and Shain (Joseph Knox and Charles J. Shain) purchased it for their own use. See here, which includes links to high resolution images, including this and this.

The Science Museum in London have an example made by John Troughton in 1778. Description and illustrations here. Note: Daumas states subsequently Troughton's workshop made a number of other dividing engines, the screws being produced by Samuel Rhee.[4].

A circular dividing engine made by Samuel Rhee, based on Ramsden's design and purchased by Jean Antoine Chaptal (1756-1832), is in the possession of the Musée des Arts et Metiers, but is not on display. Basic information here. Photographs here and here.

A Ramsden-type circular dividing engine was used by Kelvin and Hughes until the 1950s. It was donated to the Whipple Museum in 1954.[5]

The use of a worm and wheel arrangement to rotate a circular dividing table in precise angular increments, and to then engrave a series of fine radial lines, was simple in concept, but ingenuity and the highest levels of mechanical skill were required to obtain the required standards of accuracy.

The first known example of this type of dividing engine was made by Henry Hindley c.1739.

The oldest known surviving example is said to be of the type designed by the Duc de Chaulnes (1714-1769) and made in Florence in 1762. The Duc designed a machine for linear dividing, and another for circular dividing. In 1777 a French journal briefly mentioned these machines as being 'found in the cabinet of Florence', and spoke highly of them.[6]. The machines are on display at the Museo Galileo (Florence). See Dividing Engines, Florence, 1760s. Although the date of the circular engine is given as 1762, it is probable that it subsequently underwent considerable modification.