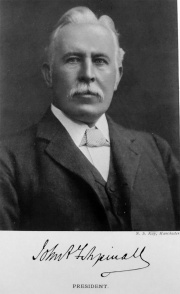 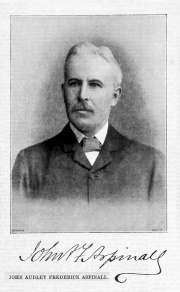 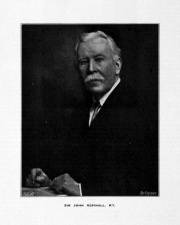 John Audley Frederick Aspinall was born on 25 August 1851, the son of a Liverpool judge (who had become a convert to Roman Catholicism), John Aspinall attended Beaumont College (a Roman Catholic boarding school in Berkshire) and was then apprenticed to Ramsbottom, and later Webb, on the LNWR. In 1872 Webb sent Aspinall to the USA where the younger man was greatly impressed by the larger loading gauge. In 1883, after responsible jobs in Crewe and Inchicore, he became locomotive superintendent of the Great Southern & Western Railway in Ireland. Here he designed a number of capable though undistinguished locomotives, before taking a similar position with the Lancashire and Yorkshire Railway in 1886. The obituary in The Engineer 1937, 22 January) noted that "No man ever went into Inchicore and came out of it without being the better, and there is never an Inchicore man who does not cherish an affection for it."

He completed the work of his predecessor, Barton Wright in ridding that Company of its unstandardized and ineffective locomotive stock and introducing better, standardized, designs. His radial 2-4-2 tank, which was often used for fast inter-city services, was perhaps his most successful design and was multiplied over the years. This locomotive had a water-scoop operated by a vacuum device (in Ireland, Aspinall had already devised an automatic vacuum brake which was adopted by several lines, including the LNWR and GNR). His inside cylinder 4-4-2 of 1899, of which forty units were built, surprised the engineering world by the size of its boiler, having 2,052 sq. ft of heating surface. Its boiler power, and its 7ft 3in. driving wheels, made it a fast engine and it is said to have exceeded 100 mile/h. One of these engines was fitted with the Aspinall superheater; this, located in the smokebox, was too small to have much effect, and was out-classed by the subsequent Schmidt superheater . He also experimented with cylinder steam jackets.

In 1899 Aspinall became General Manager of the Lancashire and Yorkshire Railway (see Rly Mag., 1899, 5, 17) for contemporary observation of this momentous event, and was a great success, capturing much of the Yorkshire coal traffic, introducing electrification between Liverpool and Southport in 1904, and between Manchester and Bury in 1916. At the outbreak of WW1 he managed to become interned by the Germans, but was released. He received a knighthood in 1917. He became President of the Institution of Mechanical Engineers.

Sir JOHN AUDLEY FREDERICK ASPINALL, D.Eng., was one of the most illustrious members the Institution has had. His influence in railway affairs in this country was probably unique, both in respect of his own eminence, and in the careers of several of his pupils. When he celebrated his eightieth birthday, three of the four chief mechanical engineers of the great railway groups of this country could claim to have received their training under him. Sir John was born in Liverpool. His father, Mr. J. B. Aspinall, Q.C., was Recorder of the city.

He received his education at Beaumont College, Berks, and in 1869 he became apprenticed to John Ramsbottom, M.I.Mech.E. (Past-President), at the Crewe works of the London and North Western Railway. He completed his training under F. W. Webb, M.I.Mech.E., and was then made assistant manager of the steelworks at Crewe.

In 1875 he was appointed works manager of the Great Southern and Western Railway at Inchicore, and became locomotive engineer in 1883. About this time he made some notable contributions to the development of the vacuum brake. He was invited in 1886 to become chief mechanical engineer of the Lancashire and Yorkshire Railway, and during the next three years he was responsible for the establishment of the new works at Horwich, replacing the older shops at Miles, Platting and Bury. He also started the Mechanics' Institute there, in 1888.

He maintained a constant interest in engineering education; he helped to establish the Chair of Engineering at the University of Liverpool, where he was Associate Professor of Railway Engineering, and in 1908 he was appointed chairman of the Faculty of Engineering. In addition he was actively concerned with the establishment of the Harrison-Hughes Engineering Laboratory there. Sir John's locomotive policy on the Lancashire and Yorkshire Railway was characterized by the building of large numbers of engines to a very few simple designs, and by carrying standardization practically to its limits. His inside-cylinder 4-4-2 engines were especially celebrated. When new they had the largest boilers in the kingdom, and incorporated some interesting experiments in superheating and steam-jacketed cylinders.

In 1899 Sir John was appointed general manager of the company, a rare distinction for an engineer. He held this position for twenty years, during which he introduced electric traction for certain suburban services; the first to be so equipped was the Liverpool and Southport line in 1904. He was also a strong advocate of the provision of extremely powerful goods engines. In connexion with the contest between five interested railways to secure the mineral traffic of the newly developed South Yorkshire coalfields, Sir John played a prominent part in the final settlement, when the South Yorkshire Joint Line Committee was formed. He also developed the steamship services of the company, both from Liverpool to Ireland and from Goole and Hull to various ports in northern Europe.

In 1917 he received the honour of knighthood; two years later he resigned his position as general manager and was appointed a director of the company. Subsequently he was appointed consulting mechanical engineer to the Ministry of Transport, where he was frequently concerned with the passage of railway Bills through Parliament. He held this position whilst the grouping of the railways took place. Sir John's connexion with the Institution covered no less than fifty-six years; he was elected a Member in 1881 and served on the Council from 1892 to 1928, when he was elected an Honorary Life Member.

In 1900 he became a Vice-President and was elected President for 1909-10. He continued to attend Council meetings up to the time of his decease, in accordance with a special standing invitation of the Council, by whom his advice was much valued. His first paper submitted to the Institution was a brief monograph on the draught in locomotive boilers, presented in 1893. In 1909 he delivered his Presidential Address on the "Electrification of Railways" and in 1925 he gave the Thomas Hawksley lecture on "Railway Notes Old and New." He also contributed on innumerable occasions to discussions on Institution papers. Sir John's gifts to the Institution included a portrait in oils of himself, presented in 1919; ten years later he gave the Presidential Chair in the Meeting Hall. Recently Sir John was honoured by the first award of the James Watt International Medal, and arrangements were made for this to be presented to him at the January General Meeting.

Sir John's death occurred, however, only three days earlier, at his home at Woking, on 19th January 1937. He was in his eighty-sixth year. In addition to his long association with the Institution, he was for 56 years a Member of the Institution of Civil Engineers, of which he was president in 1918, and before which he presented several notable papers, including his classical paper on train resistance. He was also the oldest surviving past-president of the Institution of Civil Engineers of Ireland.