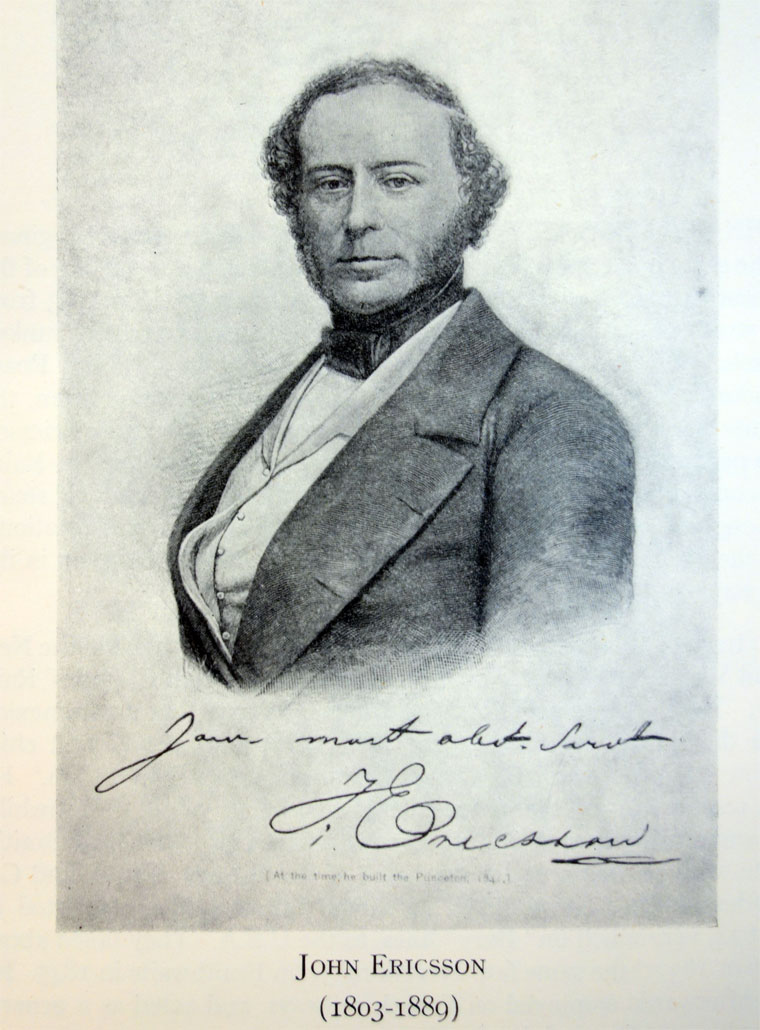 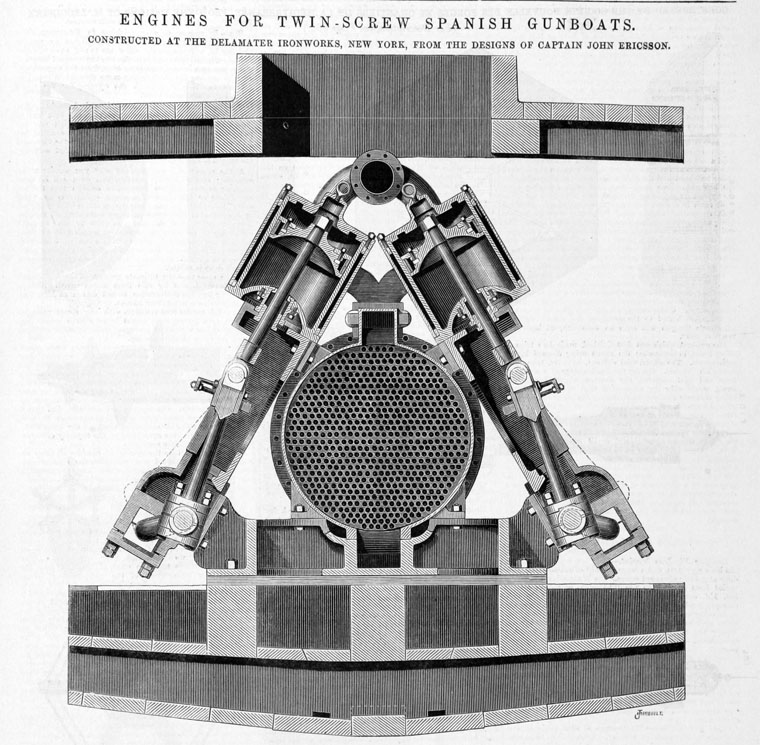 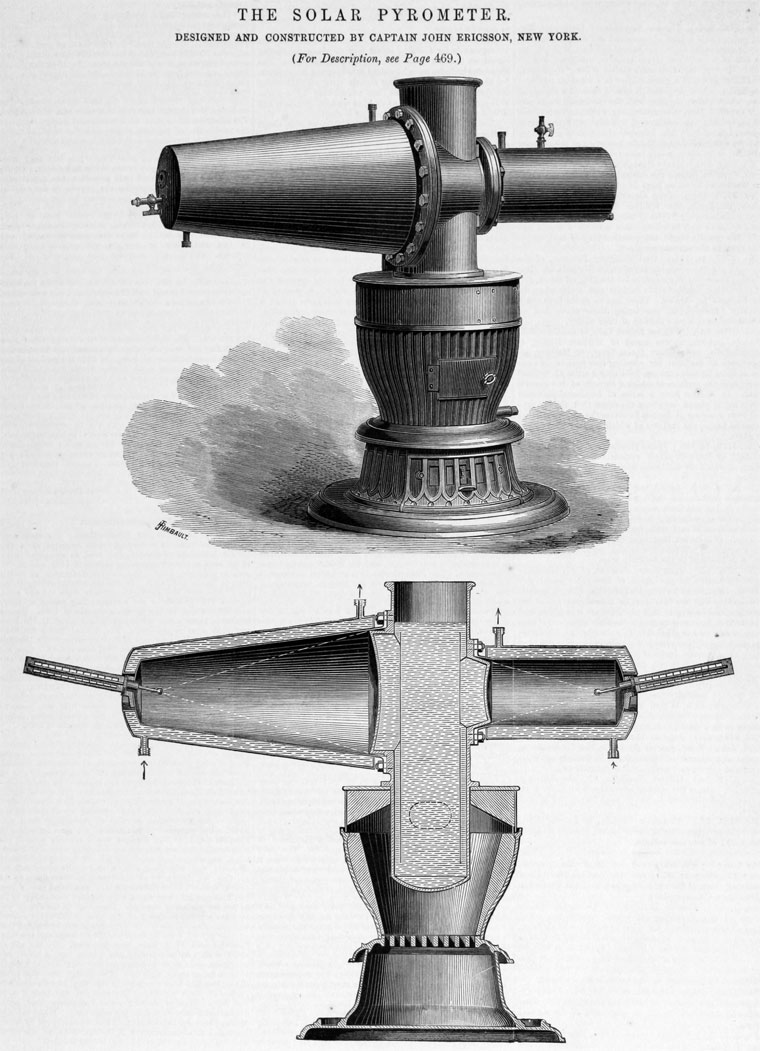 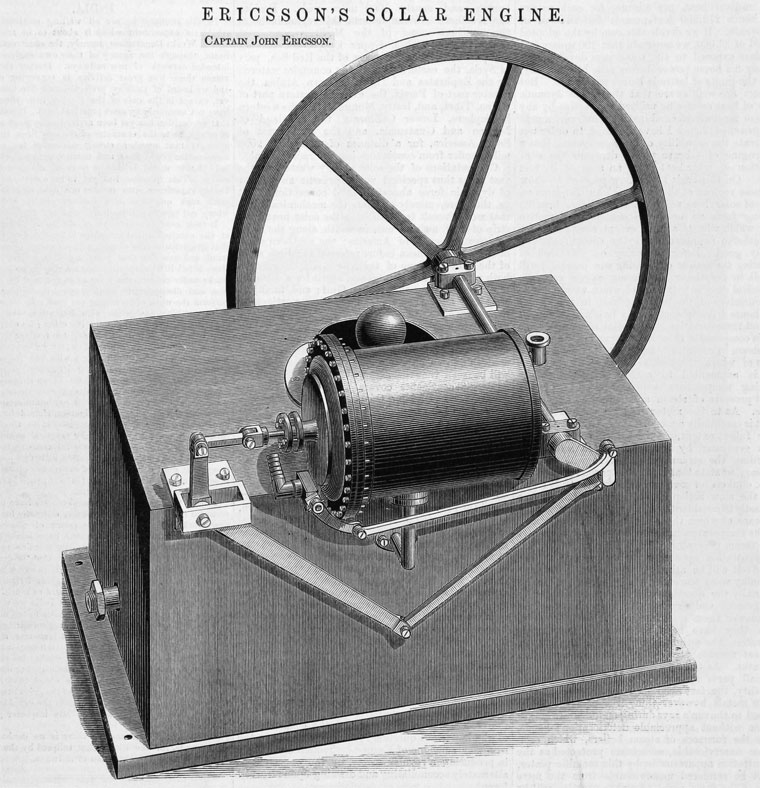 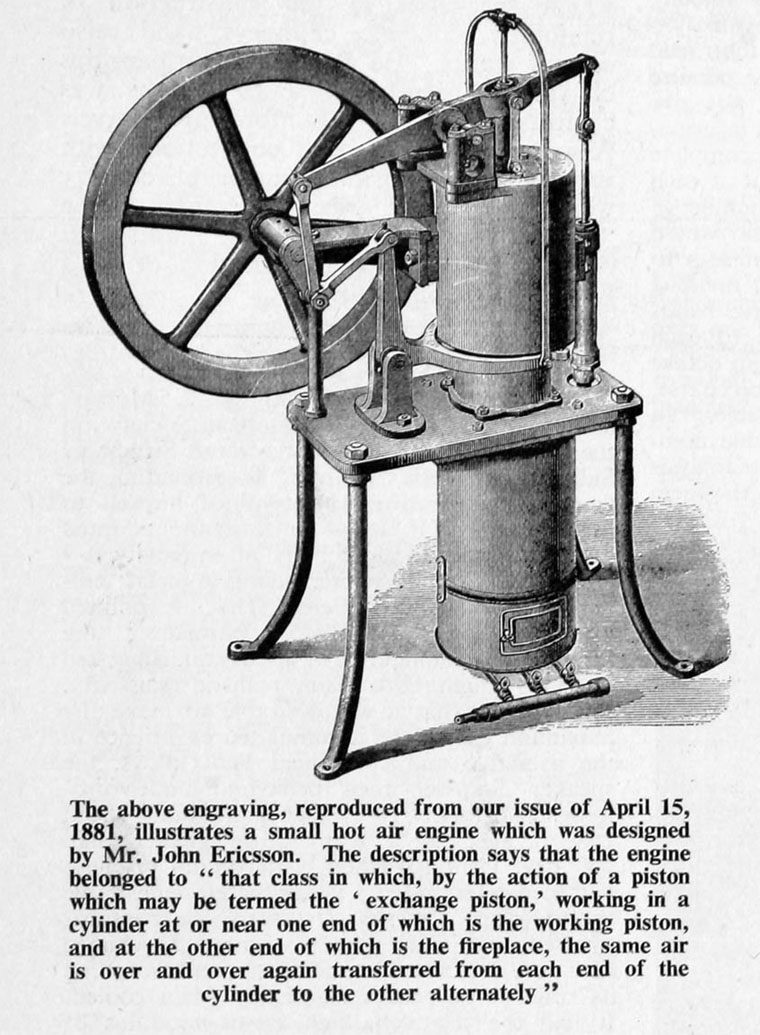 Born at Långbanshyttan in Värmland, Sweden, but primarily came to be active in the United States after spending 13 years in England.

John's and Nils's father Olof Ericsson who worked as the supervisor for a mine in Värmland had lost money in speculations and had to move his family from Värmland to Forsvik in 1810. There he worked as a 'director of blastings' during the excavation of the Swedish Göta Canal.

The extraordinary skills of the two brothers were discovered by Baltzar von Platen, the architect of the Göta Canal. The two brothers were dubbed cadets of mechanics of the Swedish Royal Navy and engaged as trainees at the canal enterprise. At the age of fourteen, John was already working independently as a surveyor. His assistant had to carry a footstool for him to reach the instruments during surveying work.

At the age of seventeen he joined the Swedish army in Jämtland, serving in the Jämtland Field Ranger Regiment, as a Second Lieutenant, but was soon promoted to Lieutenant. He was sent to northern Sweden to do surveying, and in his spare time he constructed a heat engine which used heated air instead of steam as a propellant.

His skill and interest in mechanics made him resign from the army and move to England in 1826. However, his heat engine (hot air engine) was unsuccessful. One reason was that his prototype was designed to use birch wood as fuel and would not work well with coal, which was the favoured fuel used in England.

He developed a compact and efficient type of steam boiler which used a blower to supply forced draught to the fire. It came to prominence in 1829 on the steam engine he built with John Braithwaite, the Novelty locomotive for the Rainhill Trials, a competition arranged by the Liverpool and Manchester Railway. Although it was the fastest in the competition, it suffered recurring boiler problems and could not continue to compete, the competition being won by George and his son Robert Stephenson with Rocket.

Two further locomotives were built by Braithwaite and Ericsson, named William IV and Queen Adelaide, but these were failures.

In 1829 Braithwaite and Ericsson provided the engines and boilers for the paddle steamer Victory, built for John Ross's Arctic expedition. The machinery performed very badly and during the first winter, it was dumped on shore. On his eventual return, Ross blamed all the problems on Braithwaite and Ericsson, while they blamed Ross. Ross's choice and arrangement of paddles was certainly bizarre, while Ericsson's boiler design was seriously flawed, and the associated bellows were the source of much trouble. Ross allowed no time for meaningful trials before embarking on his expedition.

Braithwaite and Ericsson built the first steam fire engine, which was followed by several further examples.

The many machines devised and built by Ericsson during this period led to financial strains. At this time he married 19-year-old Amelia Byam, a marriage that was not successful.

Ericsson became insolvent in 1835. 'John Ericsson, formerly of Princes-Street, Cavendish-Square, next of Fore Street, Limehouse, both in Middlesex, Civil-Engineer, and in that employment connected with Count Adolphe Engine Rosen, but not in Partnership with him, next of Albany-Street, Regent's-Park, then of the Adelphi Hotel, Ranelagh-Place, then of Granville-Street, both in Liverpool, afterwards a Prisoner in the King's Bench Prison, then of Union-Wharf, Regent's-Park Basin, and late of Albany-Street, Regent's-Park, Middlesex, Civil Engineer.'[1]

Ericsson devoted considerable effort to developing marine screw propellers. One type had contra-rotating propellers driven by co-axial shafts. This work brought him to the attention of American Captain Robert Stockton, who commissioned Ericsson to design a propeller steamer for him. This was built by Laird Brothers in 1838 and named 'Robert F. Stockton'. It was very successful, and later crossed the Atlantic under sail, to work for many years as a New York tug, renamed 'New Jersey'. Stockton encouraged Ericsson to take his invention to the United States of America, as it would supposedly find more backers.

Ericsson moved to New York in 1839. Stockton's plan was for Ericsson to oversee the development of a new class of frigate with Stockton using his considerable political connections to grease the wheels. Finally, after the election of President John Tyler, funds were allocated for a new design. However they only received funding for a 700-ton sloop instead of a frigate. The sloop eventually became the USS Princeton, named after Stockton's hometown.

The ship took about three years to complete and was perhaps the most advanced warship of its time. In addition to being screw-driven, it was originally designed to mount a very large (12-inch) muzzle loading wrought iron gun. Many sources credit Ericsson with the design of the gun. The barrel was forged by the Mersey Steel and Iron Co. Other innovations on the ship and artillery design included a collapsible funnel and an improved recoil system.

The relations between Ericsson and Stockton had grown tense over time and, nearing the completion of the ship, Stockton began working to force Ericsson out of the project. Stockton carefully avoided letting outsiders know that Ericsson was the primary inventor. Stockton attempted to claim as much credit for himself as possible. He procured a second, heavier 12-inch gun to be mounted on the Princeton and named the "Peacemaker". The first gun (originally named "The Orator", renamed by Stockton "The Oregon"), suffered from the development of cracks, and Ericsson reinforced it by shrinking on hoops. Stockton thought that he could make the second gun stronger by simply inreasing the thickness.

The ship was initially a success. On October 20, 1843 Princeton won a speed competition against the paddle-steamer SS Great Western, which had until then been regarded as the fastest steamer afloat. Unfortunately, during a demonstration firing of Stockton's gun the breech broke, killing the US Secretary of State Abel P. Upshur and the Secretary of the Navy Thomas Gilmer, as well as six others. Stockton attempted to deflect blame onto Ericsson, with moderate success despite the fact that the first gun had survived numerous firings while the second burst after firing just a few rounds. Stockton also refused to pay Ericsson and, using his political connections, Stockton managed to block the Navy from paying him. These actions led to Ericsson's deep hatred of the US Navy. Many accounts refer to the successful first gun as Ericsson', and the failed gun as Stockton's. In fact Ericsson was involved in the design and acceptance of the failed gun.

1850 Patent prolonged. '...In the Matter of Letters Patent granted to John Ericsson, formerly of Brook-street, New-road, in the county of Middlesex, Civil Engineer, for "An invention of an Improved Propeller applicable to Steam Navigation."...'[2]

Ericsson continued to develop his hot air engine, in which heated air acted on the cylinders instead of steam. He built the 'caloric ship' Ericsson, powered by an enormous hot air engine. It was a remarkable illustration of his industry, energy, thoroughness, and skill in management, as well as his ability to persuade financial backers that this was the power source of the future. The Ericsson's engine was said to be extremely frugal in its consumption of coal, but the engine's power output and consequently the ship's speed fell far short of expectations. It also appears that there were major problems due to overheating, and with cylinder lubrication, to the extent that the original engines were removed and replaced with new hot air engines having much smaller cylinders and working at higher pressure. Subsequently it was claimed that a speed of 11 mph was acheived, but the fuel consumption was not determined, before the ship was struck by a tornado and quickly sank. The ship was rapidly salvaged, but the owners replaced the 'caloric' engine with a steam engine.[3].

Ericsson subsequently designed hot air engines of much smaller output, and these were a commercial success. He was awarded the Rumford Prize of the American Academy of Arts and Sciences in 1862 for his hot air engine developments.

For a thorough account of the difficulties and misapprehensions surrounding early hot air engines, see 'The Regenerator Principle in the Stirling and Ericsson Hot Air Engines'[4].

On September 26, 1854 Ericsson presented Napoleon III of France with drawings of iron-clad armoured battle ships with a dome-shaped gun turret, and even though the French emperor praised this invention, he did nothing to bring it to practical application.

Shortly after the American Civil War broke out in 1861, the Confederacy quickly began developing an ironclad based on the hull of the USS Merrimack which had been burned by Federal troops before the naval base at Norfolk - Gosport Navy Yard - had been captured by the recently seceded Commonwealth of Virginia. The United States Congress addressed this issue in August 1861 and recommend that armoured ships be built for the Union Navy. Ericsson still had a dislike of the U.S. Navy but he was convinced by Cornelius Scranton Bushnell to work on an ironclad for them. Ericsson presented drawings of the USS Monitor, a novel design of armoured ship, which was finished on March 6, 1862. The ship went from plans to launch in just over 100 days, an amazing achievement.

On March 8, the Southern ironclad CSS Virginia was wreaking havoc on the unarmoured Union Blockading Squadron in Virginia. Then, with the appearance of the Monitor, a battle on March 9, 1862 at Hampton Roads, Virginia, ended in a stalemate between the two iron warships, and saved the Northern fleet from defeat. Monitor sank while under tow in rough weather. Subsequently, numerous monitors were built, and are believed to have considerably influenced the victory of the Northern states. Although flawed in a number of ways, not least inhaving very poor seaworthiness, aspects of the USS Monitor were widely influential.

Later, Ericsson worked with torpedo inventions, in particular "The Destroyer", a torpedo boat that would launch its torpedoes underwater, and in the book Contributions to the Centennial Exhibition (1877, reprinted 1976) he presents the so-called "sun engines", using solar power as the heat source for a hot air engine. Once again bitter and plagued by economic difficulties, his invention of the solar engine would not have practical applications for another 100 years.

After his death in 1889 his remains were taken from the United States to Stockholm by USS Baltimore and to the final resting place at Filipstad, in his Värmland.

1926 'Through the action of the American Society of Swedish Engineers, a monument has just been unveiled in Washington D. C., in honour of the great Swedish-American engineer and inventor'.[6]