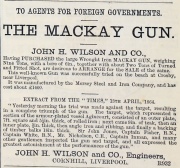 1810 Company founded by Ralph Clay. The works was known as the Mersey Forge

1838 'A Large Paddle Shaft.— An immense piece of round beaten iron, being a steam engine paddleshaft, has been made at the Mersey Works, Liverpool, for Messrs. J. Forrester and Co., engineers. The weight is 6 tons 14 1/2 cwt.; its length 23 feet, the greatest diameter 18 1/2 inches, and it is the largest piece of wrought iron ever made.'[1]

1842 Joseph Thomlinson left the Partnership with Charles Horsfall and Charles Hodgson Horsfall, carrying on the business of Iron and Steel Manufacturers, at Liverpool, in the county of Lancaster, under the firm of the Mersey Steel and Iron Company[2]

1843 SS Great Britain: 'The main wrought-iron shaft (from the Mersey Iron Works), the largest ever yet made, weighs about 18 tons.' [3]

1847 Iron Works belonging to and occupied by "The Mersey Steel and Iron Company," at 69 Sefton-street, on the south side of Egerton-street, in Toxteth-park, Liverpool[4]

1851 Exhibited at the Great Exhibition.

1852 Thomas James left the Partnership with William Joseph Horsfall, Thomas Berry Horsfall, George Henry Horsfall, carrying on business at Liverpool, in the county of Lancaster, as Manufacturers of Steel and Iron, and Iron Merchants, under the firm of the Mersey Steel and Iron Company[5].

1855 Extract from an account of a works visit, reported in The Northern Daily Times [6]:-

'The helve is a gigantic casting set upon two standards, and worked up by a cam, which transmits the motion to the helve through a strong bar of wrought iron. But the greatest curiosity of the premises is the splendid fly-wheel which no doubt is the pride of the establishment, as it is perhaps the largest wheel of its kind in the world. The diameter of the wheel is 35ft and it weighs 60 tons. It is well fixed on the crank shaft of the engine of 80 hp. The rim alone has in cross section 144 sq inches, the bearings 18 inches in diameter and are mounted in friction rollers, according to the plan of Mr William Clay the manager, who is the animating life and soul of the whole concern. So smooth and silently, so quick and gracefully does the wheel make its revolutions, that the unconscious visitor has not the slightest notion the 60 tons of metal are travelling before him at a 4,000 ft per minute. More than one third of the weight is concerned in the rim alone, which, is made to revolve with a velocity of 4,500 ft per minute at about 38 revolutions A short paper on the beautiful and ponderous piece of mechanism was read by the manager Mr Clay before the British Association, last September when they held their sitting in Liverpool.

'About 10 yrs ago in 1845 a great gun of immense calibre was forged here for the United States, Steam Frigate, PRINCETON, the length from breech to muzzle was 12 ft and the diameter 12 inches. The weight of shot 219 lbs.'

1856 'Extensive War Preparations at Liverpool.
What is doing in principal foundries throughout the kingdom may judged from the activity displayed in the, as yet, infant foundries in Liverpool. Mr. Laird has in his yards at Birkenhead and Liverpool, 14 wooden screw gunboats far advanced in construction, of 240 tons and sixty-horse power, each to be armed with two heavy guns. It is said that the Government has now doubled the order. The Mersey Steel and Iron Works Company, besides the "monster" wrought-iron gun intended as a present to the Government, which is to be 15 feet long, 13-inch bore, 25 tons weight, and to throw a ball of 300 lbs. five miles, are making two immense wrought-iron mortars, which will require a charge of nearly 2 cwt. to throw a shell of 36 inches; this size and description will be without parallel. At the Vauxhall foundry (Forrester's) 8000 tons of 8, 10, and 13-inoh shell are making for sea and land service. Messrs. Fawcett are manufacturing 90 of the largest site (18-inch) mortars for land and sea service: although of tbe same bore, the land service will weigh 33 cwt, while the sea service require to be up to the weight of five tons. The Ordnance authorities apply most the scrupulous test to the make.'[7]

1857 'Accident at the Mersey Steel and Iron Works. — At the upper works of the Mersey Steel and Iron Company, Liverpool, on Thursday night, the rim of a flywheel thirty or forty tons in weight, and running at the rate of one hundred revolutions per minute, was suddenly broken, and the heavy portions flew about in all directions. At the time of the accident between one and two hundred men were at work, and it appears marvellous that not more than two or three persons were injured, and those not fatally.' [9]

1861 'PRINCE ALFRED IN LIVERPOOL. …a landing was made opposite the Mersey Steel and Iron Works. At these extensive premises, the Prince was shown the new monster (600-pounder) breech loading rifled gun, constructed on Clay's patent principle. He also saw an immense piece of wrought iron, part of the cranks for the engines of the iron-clad vessel of war Achilles (now being constructed at Chatham dockyard), taken from the furnace while hot and put under the operation of the powerful steam hammer.'[12]

1862 The Mersey Steel and Iron Co. exhibited at the 1862 Exhibition

1864 The company officially became 'The Mersey Steel and Iron Co. Ltd'. Prior to this name change, the forge occupied land on either side of Sefton Street, but after incorporation it moved its position to allow for the construction of the Garston Railway line, which cut through the premises. The Forge now straddled the south end of Grafton Street, separated by Sefton Street and Horsfall Street. Spread over three sites, interconnected by tunnels. [13]

17th November 1864: General Todleben, the eminent Russian engineer officer, accompanied by Admiral Boutakoff, visited visited the Mersey Forge of the Mersey Steel and Iron Co, and there met Colonel Clay prior to witnessing trials of James Mackay's 12-pounder 'windage adaptation gun'. The barrel had been forged by Firth of Sheffield and turned and bored by the Mersey Steel and Iron Co. The General also witnessed an armour plate being rolled at the works. [14][15]

1866 Forged the crankshaft for the Hercules, constructed by John Penn and Sons. It weighed 34.5 tons in the rough. Transported from Liverpool to Camden on a special railway wagon, then conveyed to Greenwich via Regent Street and Waterloo bridge, hauled by 30 horses.[16]

1869 Having built and demonstrated the Mackay Gun, made of wrought iron, it was sold to John H. Wilson and Co (see advert)

1881 on the petition of John Fowler, iron founder of Sheffield, the company was wound up[18]

1884 Court case Mersey Steel and Iron Co vs. Naylor Benson and Co Respondents sold 5,000 tons of steel to plaintiff, to be delivered at the rate of 1,000 tons monthly. Deliveries started but the respondents got into difficulties and were going to be wound up. On receipt of this information the buyers decided to suspend payment. Respondents treated this failure as discharging them from all further obligations. They were sued. Held: This was not repudiation because they thought that they were acting lawfully.

Retrieved from "https://gracesguide.co.uk/index.php?title=Mersey_Steel_and_Iron_Co&oldid=1190866"
Categories:
This page was last edited on 14 August 2020, at 13:45.
Privacy policy
About Graces Guide
Disclaimers