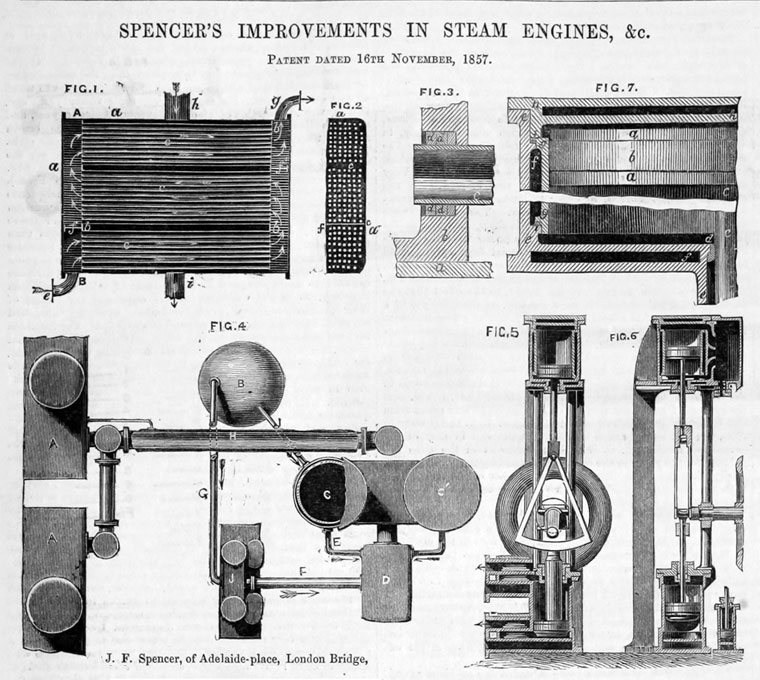 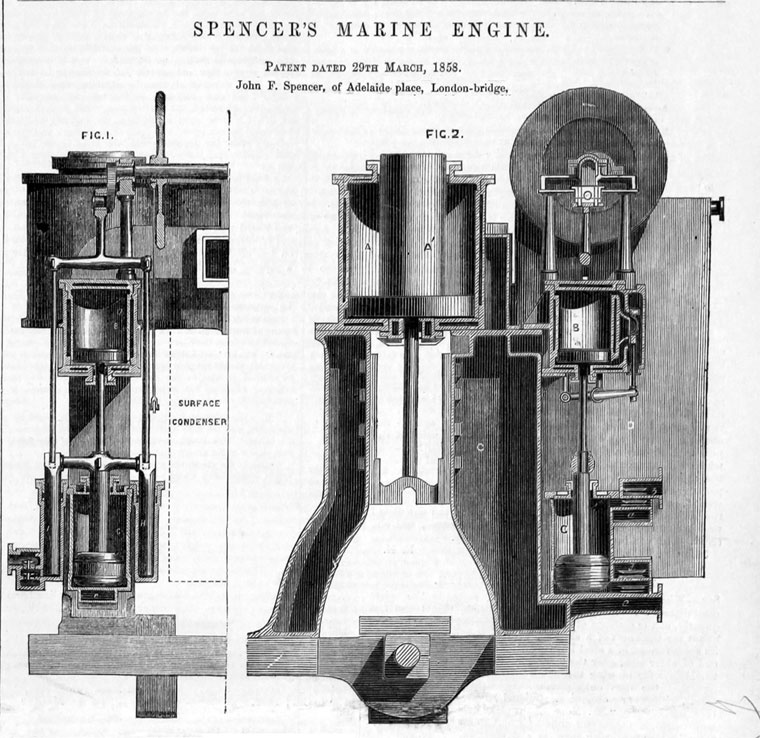 John Frederick Spencer (c1826-1915), of Fletcher and Spencer involved with William Inglis in the Spencer and Inglis Corliss trip gear

c1826 Born near Taunton the son of Surgeon-Major William Spencer

1857 Patent. '2874. To John Frederick Spencer, of Brighton, in the county of Sussex, Marine Engineer, for the invention of "certain improvements in steam engines, and in the apparatus connected therewith."'[1]

1857 Set up as consulting engineer in Newcastle upon Tyne

1858 Patent. '661. To John Frederick Spencer, of No. 1, Adelaide-place, London Bridge, Marine Engineer, for the invention of "improvements in marine engines."'[2]

1860 Patent. '120. To John Frederick Spencer, of Adelaide place, London Bridge, Consulting Engineer, for the invention of "improvements in steam engines for propelling ships and other vessels, and for other purposes."'[4]

1861 Patent. '111. To John Frederick Spencer, of Newcastle-upon-Tyne, Consulting Engineer, for the invention of "improvements in steam engines, and the machinery and apparatus connected therewith."'[6]

1861 Patent. '1693. And John Frederick Spencer, of Newcastle-upon-Tyne, Consulting Engineer, has given the like notice in respect of the invention of "improvements in steam engines and the machinery and apparatus connected therewith."'[7]

1862 Patent. '1063. To John Frederick Spencer, of Newcastle-on-Tyne, Consulting Engineer, for the invention of "improvements in steam engines.'[8]

1863 Patent. '389. And John Frederick Spencer, of Newcastle-on-Tyne, in the county of Northumberland, Engineer, has given the like notice in respect of the invention of "improvements in steam engines."'[9]

1863 Patent. '442. And John Frederick Spencer, of Newcastle-upon-Tyne, Consulting Engineer, has given the like notice in respect of the invention of "improvements in apparatus for regulating and working the valves of steam and other engines."'[10]

1863 Patent. '1517. To John Frederick Spencer, Consulting Engineer, of Newcastle-on-Tyne, for the invention of "improvements in steam gas and water tube joints."'[11]

1865 Patent. '82. To John Frederick Spencer, of Newcastle-on-Tyne, Consulting Engineer, for the invention of "improvements in regulating and working the valves of steam and other engines "'[12]

1874 Patent. '1413. John Frederick Spencer, of No. 28, Great George-street, Westminster, in the county of Middlesex, and William Inglis, of Bolton, in the county of Lancaster, for an invention of "improvements in the means of starting steam engines."—Dated 23rd April, 1874.'[13]

1879 Designed the engine for the steam yacht Wanderer, based on Perkins' approach but without involving Perkins himself[14]

1880 He was understood to be working in South America[15]

1883 August 30th. Married (2) at Forest Hill to Florence Scott Smith. JFS is a Civil Engineer and his father William is deceased. His wife is aged 22 years.

JOHN FREDERICK SPENCER, who died on March 18th in his ninetieth year, was born near Taunton, in 1825, the son of Surgeon-Major William Spencer, 5th Bengal Light Cavalry and staff surgeon to Sir Jaspar Nicholls, Commander-in-Chief in India. He was a pupil in the works of Messrs. Barratt and Exall, Reading Ironworks, where the late Mr. Lavington Fletcher, chief engineer of the Manchester Steam Users' Association, was his fellow-pupil. During their time at the works Mr. Fletcher, with Mr. Spencer's help, designed and built for himself a steam carriage which had many notable features, chief of which were its weight, only 15 cwt., and its steam pressure 400 lb. per square inch. The latter figure, about which there is no doubt, was certainly remarkable for that date, about 1844. The carriage had three wheels and was steered by a tiller on the front wheel frame. The engine had a 4in. cylinder, acting direct on the rear axle, and the boiler was of the vertical fire-tube type. The carriage, with Mr. Spencer at the tiller, made many successful trips about Berkshire, its speed on the level being from l5 to 18 miles an hour but it was naturally regarded with no favour by horse users in the neighbourhood, for Mr. Spencer used to say that the exhaust sounded like a Gatling gun. The feed pump was the chief source of trouble and eventually led to the carriage being laid up, the engine and boiler being used by a builder in his workshop.

On leaving the works both the young engineers were employed as assistant to Mr. I. K. Brunel on the South Wales Railway, being stationed at Swansea, where Mr. Spencer met Miss E. A. Bath, whom he afterwards married. Having gained some experience of shipbuilding in South Wales, he went in 1851 to the works of Messrs. J. W. Hoby and Co., Renfrew, as shipbuilding manager. The steamers this firm turned out were interesting experiments, but were unsuccessful, and after about two years Mr. Spencer left Renfrew for London and Brighton. For a short time he was in partnership with Mr. L. E. Fletcher, and then became superintendent engineer to the London, Brighton and South Coast Railway for the Newhaven and Dieppe steamer service, a position he hold until 1857, when he began to practise as consulting engineer and naval architect at Newcastle-on Tyne. He was well known in that district during his ten years stay there, as an advocate of double bottoms for steamers, surface condensers, compound cylinders, steam jacket , superheaters and feed heaters. His patented independent surface condensing plant were fitted in numerous steamers and works, and many of them gave very good results, one in connection with a pair of 38in. blast furnace engines at Port Clarence effecting a saving in coal of 40 per cent. Another supplied to the Carriage Department, Woolwich Arsenal attracted much attention and was still working there thirty year later.

In 1867 he was elected a member of the Institution of Civil Engineers and in the same year he was mainly instrumental in establishing the North-Eastern Engineering Company, Limited, with works at Sunderland, which he designed on lines which were then somewhat novel. He became managing director of the company and was responsible for the design of the marine engine and boilers which were built there for the first few years. About 1870 Mr Spencer went to London and resumed consulting work at Great George-Street, afterwards removing to Metropolitan Chambers, New Broad-street, and in 1896 to Haworth's-buildings, Manchester, where he remained until his retirement from business in 1903.

Mr. Spencer's best known work was probably in connection with the introduction of the Corliss engine into England in association with the late Mr. William Inglis, whom he met in Canada and induced to come to this country. The Spencer and Inglis Corliss trip gear was probably more widely used, both in this country and the Continent, than any Corliss gear and was entirely Mr. Spencer's design and patent, Mr. Inglis's name being coupled with his on account of his previous Corliss engine experience and a financial interest in the patent. Some Corliss engines designed for land work by Mr. Spencer attracted much attention at the time, notably an experimental engine for Cooper's Hill Engineering College and the large mill engine at Saltaire which gave very economical results, but his main interest was in introducing this type of engine into marine practice. His patented Corliss marine engines were fitted in several ships, among them the Circassian of the Allan Line, but they did not find general favour.

Specifications and designs for a number of steamers came from Mr. Spencer's office between 1870 and 1880, among them several auxiliary steamers with lifting screws, for he was a believer in the combination of steam and sail. He also was a supporter of the Perkins high-pressure engine and boiler, which, however, did not survive the many difficulties attending their introduction.

A connection with the Chili trade through Messrs. Henry Bath and Son, for whom he designed several steamers, led to his being engaged by Messrs. Antony Gibbs and Sons to make an investigation and report regarding the nitrate industry. He made a lengthy visit to Chili and Peru in 1879-80 and, on his return, designed on lines laid down by Mr. Adamson, his clients' engineer and manager in Chili, the Antofagasta Nitrate Works, which were described a good many year later by an engineering authority in a paper before the Institution of Civil Engineers as "the finest piece of plant machinery in South America." Much other work for these clients was carried out by Mr. Spencer and he also acted for a number of year as buying and inspecting engineer for the Colonial Sugar Refinery Company, of Sydney, N.S.W., the whole of the buildings and plant for several large sugar factories passing through his hands.

His removal to Manchester was due to a hope he entertained of establishing a large engineering works on the Ship Canal. He held strong opinions regarding works design, some of which he embodied in the Sunderland Works and in the Linthouse Works of Messrs. Alex. Stephen and Son, Glasgow, which were also designed by him. His idea were further developed in designs prepared for the proposed works at Millwall for the manufacture of the Perkins engine and boiler and the "Concentration Engine Works" for the Ship Canal included in the designer's opinion such a combination of valuable features as would have materially reduced the cost of manufacture of heavy machinery. His failure to enlist sufficient support for this scheme was a very great disappointment to him.

Mr. Spencer took a keen interest in engineering education and used to lecture on technical subjects at the Mechanics' Institute at Newcastle about 1860. He was also a contributor to the technical journals - THE ENGINEER amongst them - in his earlier years and to the Proceedings of the Institutions of Civil Engineers, Mechanical Engineers, Engineers and Shipbuilders in Scotland and North-East Coast Engineers and Shipbuilders.

Mr. Spencer's first wife died in 1880 and a few years later he married Miss Florence nuth, who survives him.

Mr. Spencer's kindly and genial nature made him many friends and by many of his staff and pupils he was regarded with lasting affection. His enthusiasm for improvement helped in the advancement of engineering knowledge in several directions, though in some cases it led him into difficulties and even into failure.