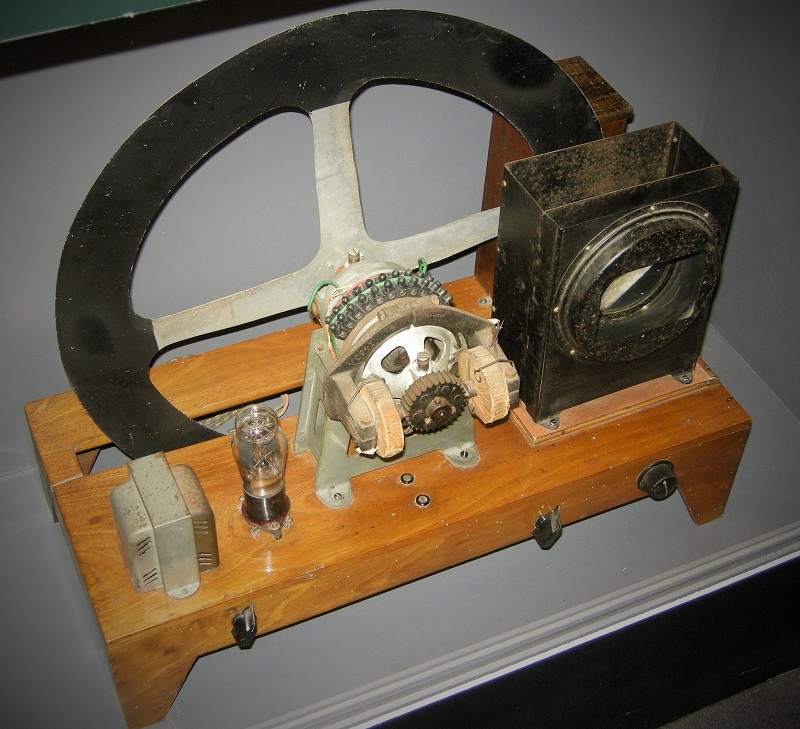 This example at the Milan Museum of Science and Technology is described as built by the brothers Giovanni and Bruno Fracarro of Fracarro Radioindustrie, who produced kits for home-assembly. However, it is noted that the main iron casting bears the identical pattern number to the British original

Baird was born in Helensburgh, Dunbartonshire and educated at Larchfield Academy (now part of Lomond School), Helensburgh; the Glasgow and West of Scotland Technical College (which later became the University of Strathclyde); and the University of Glasgow. His degree course was interrupted by World War I and he never returned to graduate.

In early 1923, and in poor health, Baird moved to 21 Linton Crescent, Hastings on the south coast of England and rented a workshop in Queen's Arcade in the town. In February 1924, he demonstrated to the Radio Times that a semi-mechanical analogue television system was possible by transmitting moving silhouette images. In July of the same year, he received a 1000-volt electric shock but fortunately survived with only a burnt hand. His landlord, a Mr Tree, asked him to quit his Hastings workshop and he moved to upstairs rooms in Soho, London where he made a technical breakthrough. Baird gave the first public demonstration of moving silhouette images by television at Selfridges department store in London in a three-week series of demonstrations beginning on 25 March 1925.

In his laboratory on 2 October 1925, Baird successfully transmitted the first television picture with a greyscale image: the head of a ventriloquist's dummy nicknamed "Stooky Bill" in a 30-line vertically scanned image, at five pictures per second. Baird went downstairs and fetched an office worker, 20-year-old William Edward Taynton, to see what a human face would look like, and Taynton became the first person to be televised in a full tonal range.

On 26 January 1926, Baird repeated the transmission for members of the Royal Institution and a reporter from The Times in his laboratory at 22 Frith Street in the Soho district of London. The location of his laboratory is now marked by a blue plaque above Bar Italia. By this time, he had improved the scan rate to 12.5 pictures per second. It was the first demonstration of a television system that could broadcast live moving images with tone graduation.

During 1926 continual effort was made to reduce the intense illumination that occurred at the transmitting end of television. Attention was directed at the possibility of using infrared rays which have no deleterious action on the human body, unlike the previously considered ultra-violet rays, and which moreover, transcend in penetrative power the rays of the visible spectrum. The use of these rays in conjunction with the "televisor" enabled Mr. Baird to transmit living scenes without subjecting the sitter to discomfort. The person whose image was to be transmitted would sit in a totally dark room and facial movements, such as smiling etc. were reproduced at the receiving end just as well as they were when the powerful lights were used. Mr. Baird believed that his new system would eventually lead to important developments in connection with warfare, for a beam of infra-red rays used in conjunction with the latest televisor would render "surprise night attacks" impossible.[1]

Baird then set up the Baird Television Development Co, which in 1928 made the first transatlantic television transmission, from London to Hartsdale, New York, and the first television programme for the BBC.

He demonstrated the world's first colour transmission on 3 July 1928, using scanning discs at the transmitting and receiving ends with three spirals of apertures, each spiral with a filter of a different primary colour; and three light sources at the receiving end, with a commutator to alternate their illumination. That same year he also demonstrated stereoscopic television.

In November 1929, Baird and Bernard Natan established France's first television company, Télévision-Baird-Natan. He televised the first live transmission of the Epsom Derby in 1931. He demonstrated a theatre television system, with a screen two feet by five feet, in 1930 at the London Coliseum, Berlin, Paris, and Stockholm.

From 1929 to 1932, the BBC transmitters were used to broadcast television programmes using the 30-line Baird system, and from 1932 to 1935, the BBC also produced the programmes in their own studio at 16 Portland Place.

In 1932, Baird was the first person in England to demonstrate ultra-short wave transmission.

In November 1936, the BBC began alternating Baird 240-line transmissions with the Marconi-EMI Television Co's electronic scanning system which had recently been improved to 405 lines[2]. The Baird system at the time involved an intermediate film process, where footage was shot on cine film which was rapidly developed and scanned.

The BBC ceased broadcasts with the Baird system in February 1937, due in large part to the lack of mobility of the Baird system's cameras, with their developer tanks, hoses, and cables.

Baird's television systems were replaced by the electronic television system developed by the newly-formed Marconi-EMI Television Co under Isaac Shoenberg, which had access to patents developed by Vladimir Zworykin and RCA. Similarly, Philo T. Farnsworth's electronic "Image Dissector" camera was available to Baird's company via a patent-sharing agreement. However, the Image Dissector camera was found to be lacking in light sensitivity, requiring excessive levels of illumination. Baird's used the Farnsworth tubes instead to scan cine film, in which capacity they proved serviceable through prone to dropouts and other problems. Farnsworth himself came to London to Baird's Crystal Palace laboratories in 1936, but was unable to fully solve the problem; the fire that burned the Palace to the ground later that year further hampered the Baird company's ability to compete.

Baird made many contributions to the field of electronic television after mechanical systems had taken a back seat.

In 1939, he showed colour television using a cathode ray tube in front of which revolved a disc fitted with colour filters, a method taken up by CBS and RCA in the United States.

In 1941, he patented and demonstrated a system of three-dimensional television at a definition of 500 lines.

In 1943, the Hankey Committee was appointed to oversee the resumption of television broadcasts after the war. Baird persuaded them to make plans to adopt his proposed 1000-line Telechrome electronic colour system as the new post-war broadcast standard. The picture quality on this system would have been comparable to today's HDTV. The Hankey Committee's plan lost all momentum partly due to the challenges of postwar reconstruction. The monochrome 405-line standard remained in place until 1985 in some areas, and it was three decades until the introduction of the 625-line system in 1964 and (PAL) colour in 1967. A demonstration of large screen three-dimensional television by the BBC was reported in March 2008, over 60 years after Baird's demonstration.

Some of Baird's early inventions were not fully successful. In his twenties he tried to create diamonds by heating graphite and shorted out Glasgow's electricity supply.

Later Baird perfected a glass razor which was rust-resistant, but shattered.

Inspired by pneumatic tyres he attempted to make pneumatic shoes, but his prototype contained semi-inflated balloons which burst.

He also invented a thermal undersock (the Baird undersock), which was moderately successful. Baird suffered from cold feet, and after a number of trials, he found that an extra layer of cotton inside the sock provided warmth.

Baird's numerous other developments demonstrated his particular talent at invention. He was a visionary and began to dabble with electricity. In 1928, he developed an early video recording device, which he dubbed Phonovision. The system consisted of a large Nipkow disk attached by a mechanical linkage to a conventional 78-rpm record-cutting lathe. The result was a disc that could record and play back a 30-line video signal. Technical difficulties with the system prevented its further development, but some of the original phonodiscs have been preserved, and have since been restored by Donald McLean, a Scottish electrical engineer.

Baird's other developments were in fibre-optics, radio direction finding, infrared night viewing and radar. There is discussion about his exact contribution to the development of radar, for his wartime defence projects have never been officially acknowledged by the UK government. According to Malcolm Baird, his son, what is known is that in 1926 Baird filed a patent for a device that formed images from reflected radio waves, a device remarkably similar to radar, and that he was in correspondence with the British government at the time. The radar contribution is in dispute. According to some experts, Baird's "noctovision" is not radar. Unlike radar (except Doppler radar), Noctovision is incapable of determining the distance to the scanned subject. Noctovision also cannot determine the coordinates of the subject in three-dimensional space.

Baird built what was to become the world's first working television set by purchasing an old hatbox and a pair of scissors, some darning needles, a few bicycle light lenses, a used tea chest, and sealing wax and glue.

There is a working model of the Baird televisor at the London Science Museum.

From December 1944 until his death two years later, Baird lived at a house in Station Road, Bexhill-on-Sea, immediately north of the station itself.

Baird died in Bexhill-on-Sea, Sussex, England on 14 June 1946 after a stroke in February of that year. The old house was demolished in 2007. The Sea Road-Station Road skyline now features a new block of 51 flats on the site, renamed "Baird Court".

John Logie Baird is buried with his mother, father and wife in Helensburgh Cemetery, Dunbartonshire.

Baird's memoirs have been published in several forms, most recently as edited by his son, Malcolm, in a fascinating book called 'Television and Me' [3]. An earlier version was 'Sermons, Soap and Television'