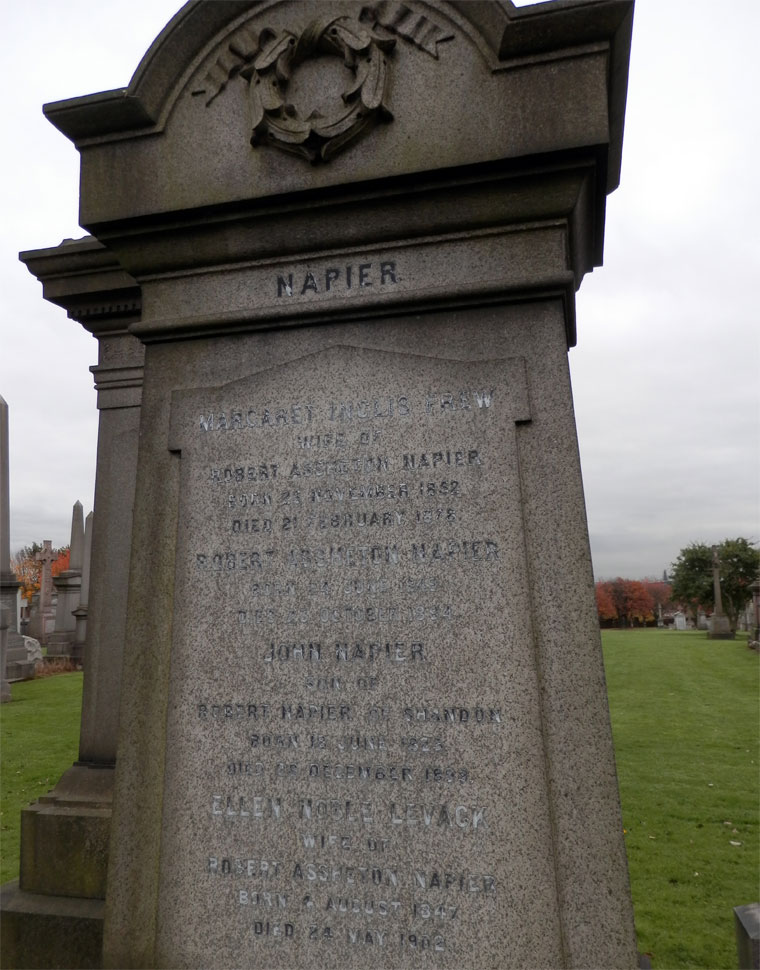 1854 Became a member of the firm of R. Napier and Sons, taking charge of the engine department[1]

JOHN NAPIER, second son of the late Robert Napier, of West Shandon, the well-known engineer and shipbuilder, was born in Glasgow on the 18th June, 1823.

He was educated first at the High School of Glasgow, where he gained the mathematical gold medal, and subsequently at the University.

In 1839 he entered his father’s business, and at the Vulcan Foundry was trained as an engineer under the late David Elder.

In 1845 he designed the machinery for the Admiralty yacht 'Fire Queen.' The engines were quick-running with light pistons, and the framing was of malleable iron-a departure from the recognised practice. The vessel was a great success, attaining what was then a phenomenal speed of nearly 16 miles an hour.

In 1852 Mr. Robert Napier associated with him in business his sons under the style of R. Napier and Sons, and in 1857, after the retirement of his brother, Mr. John Napier became the active partner, a position he retained until his withdrawal from business. During his management he was assisted by several well-known engineers, whom he appointed as works managers, among whom may be mentioned the late Sir W. Pearce, Walter Brock, Alex. Shanks, and J. W. Shepherd.

While under his direction, Messrs. Napier executed many large and important contracts for the British, French, Russian, Turkish, and other Governments. Among the special vessels may be noted the British ironclads, ‘Black Prince,' 'Hector,' 'Hotspur,' 'Audacious,' 'Malabar' and 'Northampton,' and the Turkish frigates.

The connection formed by Mr. Robert Napier with the Cunard Company was continued, and in 1861 the 'Scotia' was built, which at the time was the largest mercantile steamer afloat (excepting the 'Great Eastern'), and long continued to be the 'Queen of the Cunard fleet.'

In addition to building steamers for most of the leading lines, such as the Royal Mail Company, the Pacific Company, the Peninsular and Oriental Company, Mr. Napier took a special interest in the inception of Messrs. Currie’s Cape steamers, designing for them in 1871 the 'Edinburgh Castle' and the 'Windsor Castle,' which were followed by several other vessels each surpassing its predecessor.

In 1877, after the death of his father, Mr. Napier resolved to retire from business, and shortly afterwards took up his residence in London. He became a Director of Donald Currie and Co, thus finding a congenial sphere for his leisure, and his engineering experience being much appreciated by his co-directors.

This notice would be incomplete without recording his unbounded generosity and kindly nature. He was always ready to help forward any good work, and none of his old employees was allowed to suffer in person from poverty. His anxiety on their account was beyond expression, and though it was 23 years since his retirement from business, up to the last they were the constant participators of his kindness.

He was since 1877 a Fellow of the Royal Society of Edinburgh, and he was also a member of numerous scientific societies.

He was elected a Member of the Institution on the 5th December, 1876