Grace's Guide is the leading source of historical information on industry and manufacturing in Britain. This web publication contains 142,104 pages of information and 227,779 images on early companies, their products and the people who designed and built them. 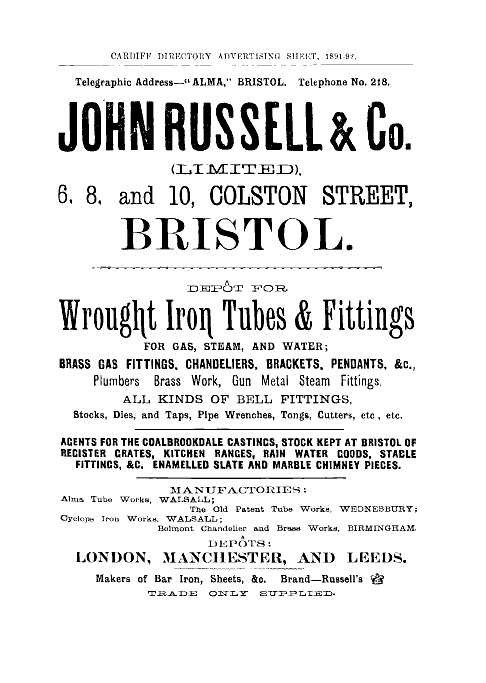 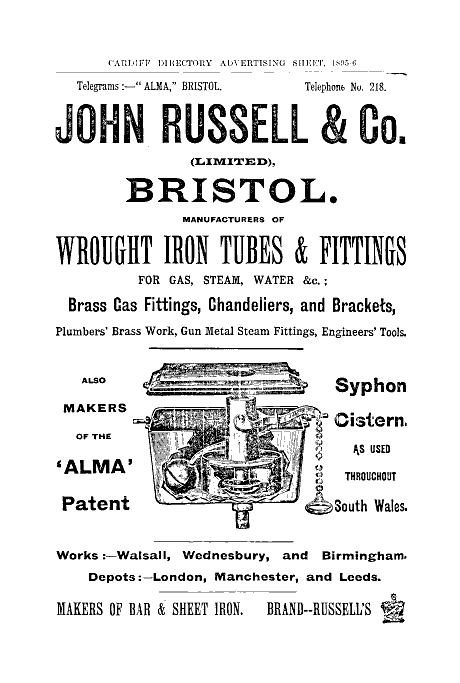 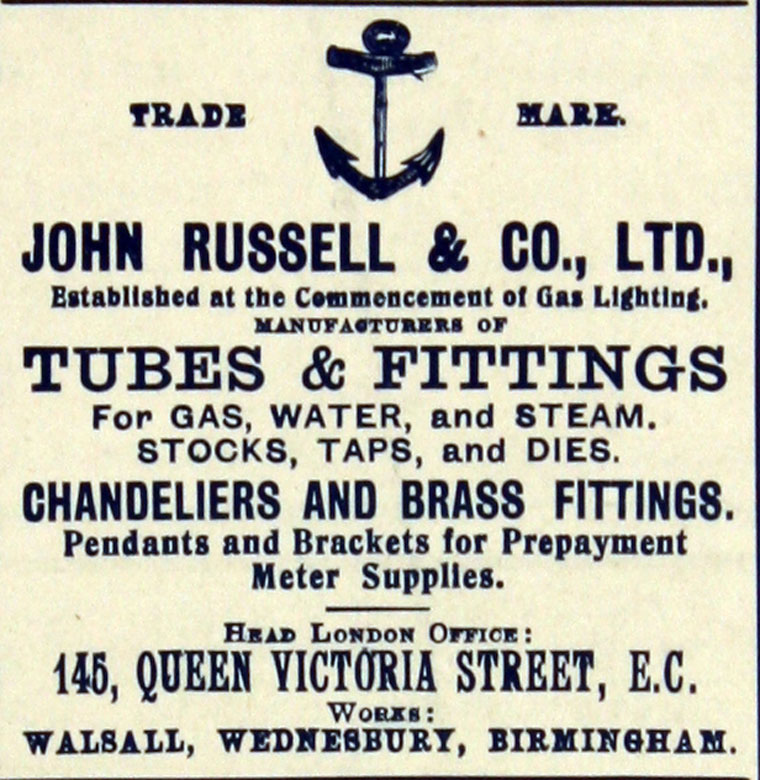 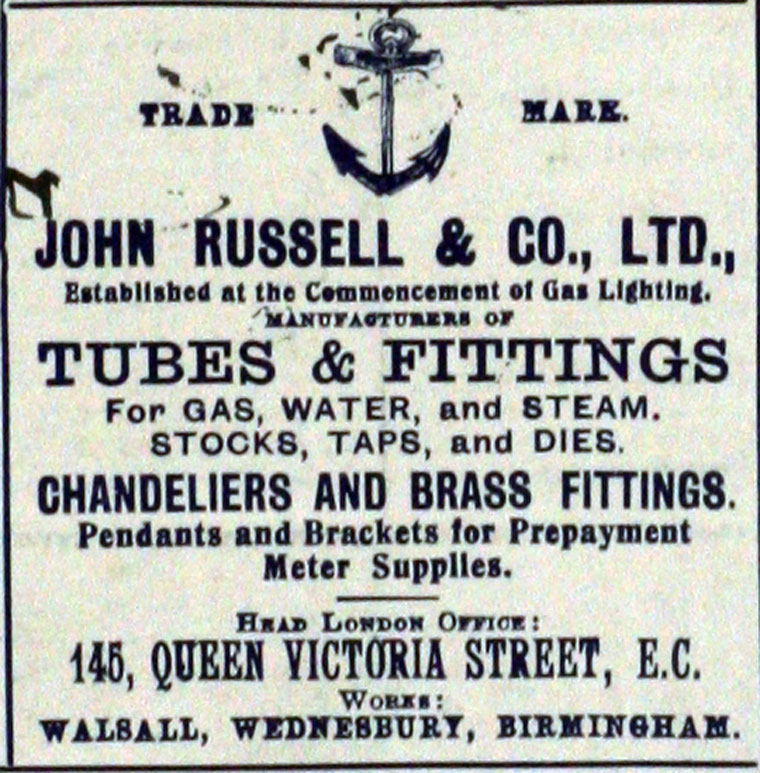 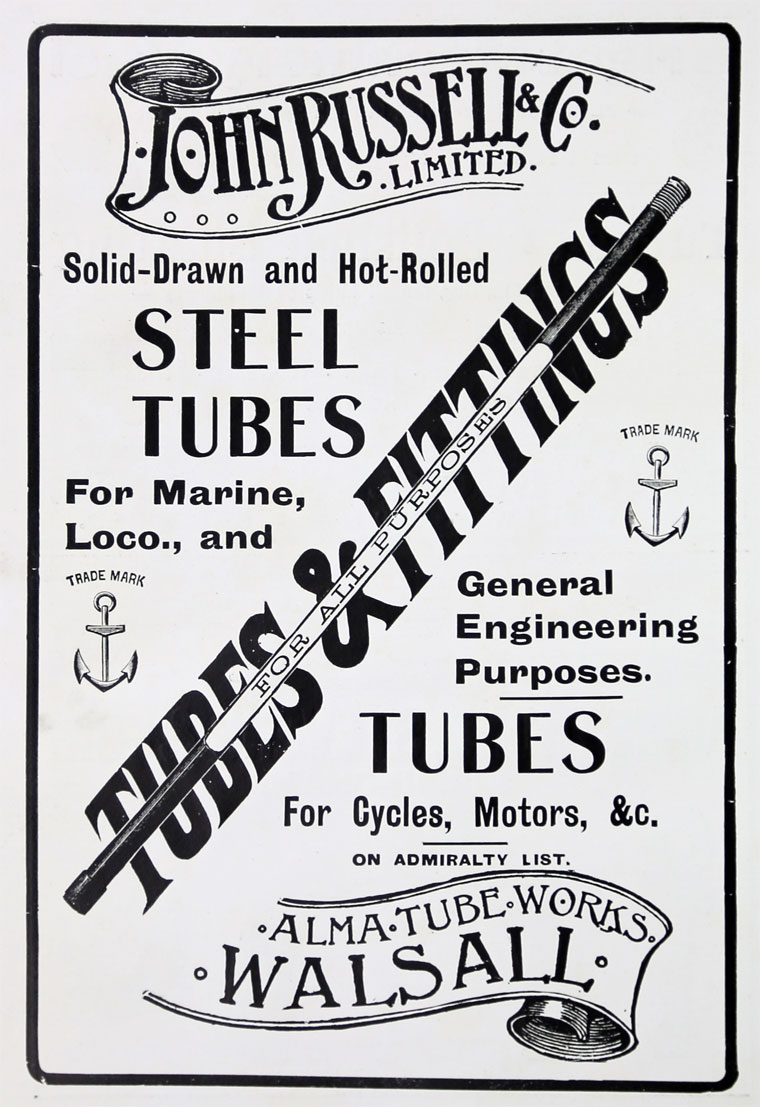 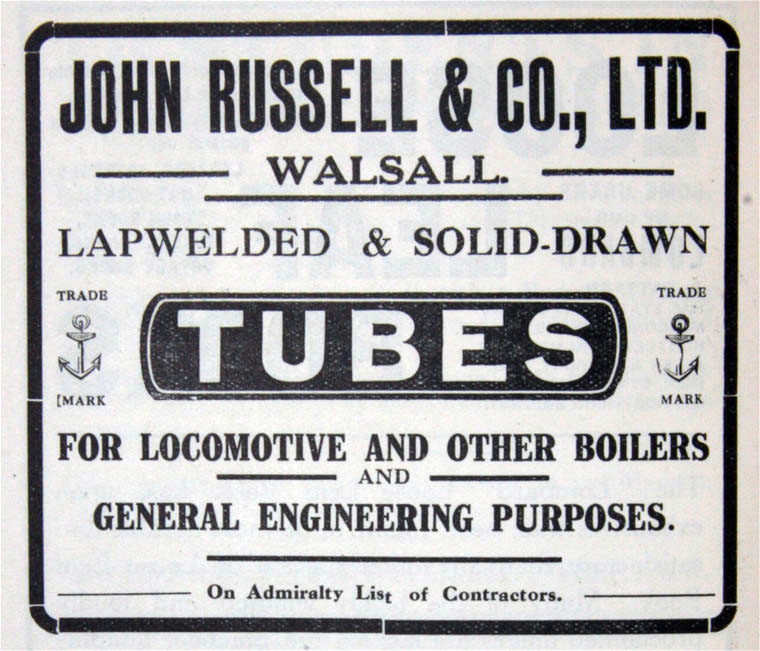 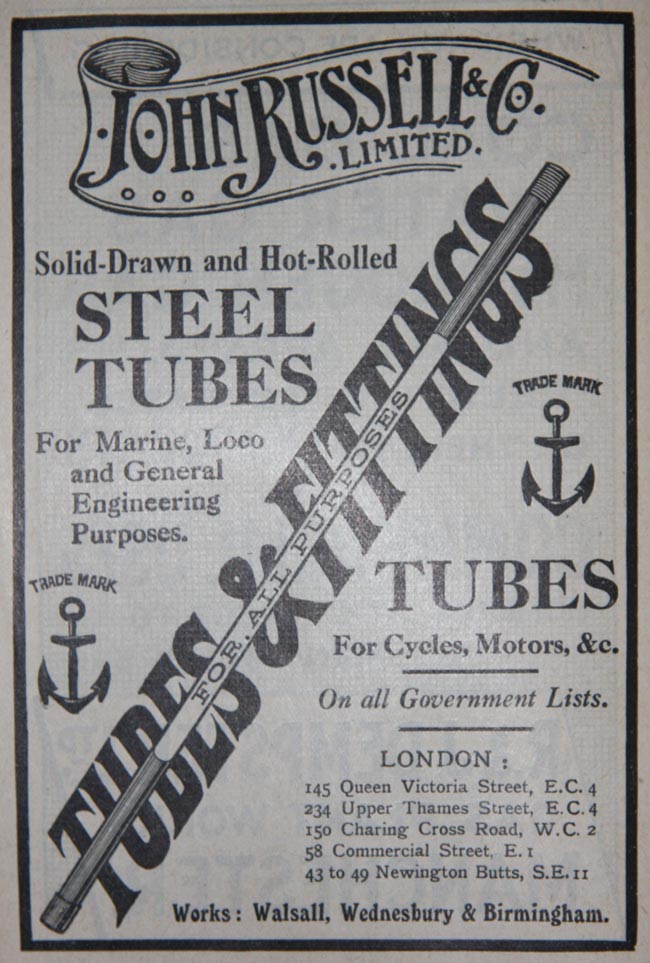 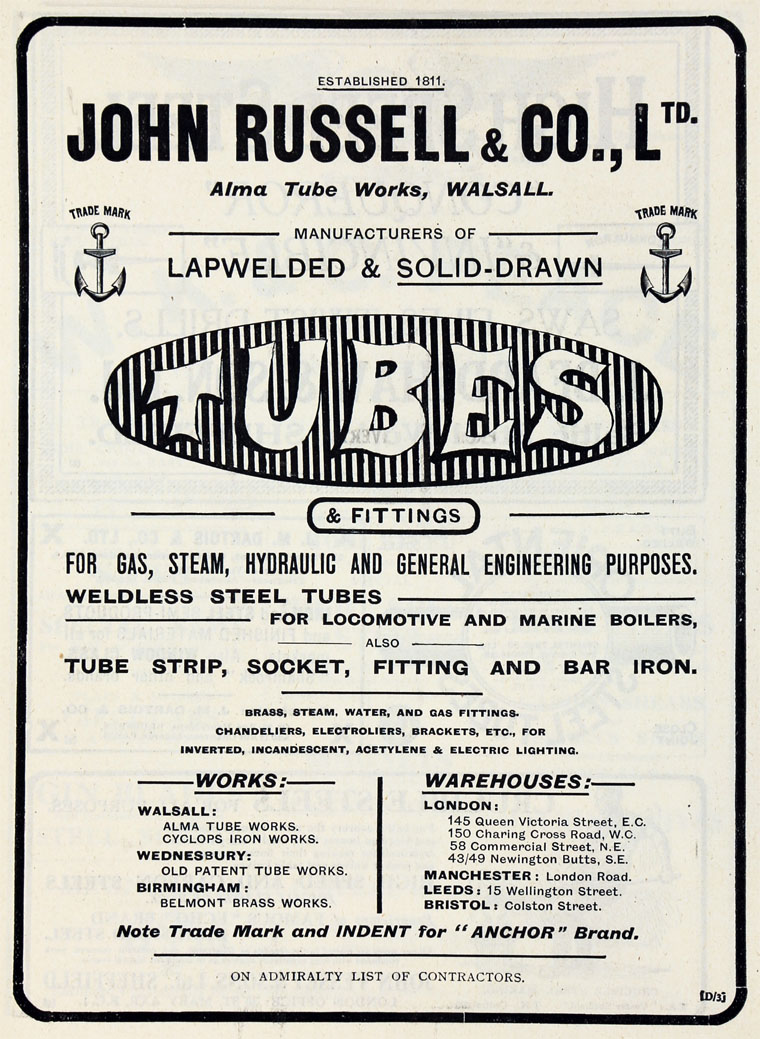 Depots at London, Manchester and Leeds.[1]

Manufacturers of Patent Welded Iron Tubes and Fittings for Gas, Steam and Water.[2] and of Hoop, Bar and Merchant Iron at the Cyclops Ironworks, Walsall.[3]

1811 John Russell, gun barrel maker and landlord of the Turk's Head Inn, began to produce wrought iron tubes. His tapered tubes pushed together but were very difficult to make. As an alternative, John and his brother James developed a hand-forged wrought iron socket for joining parallel tubes together. Aaron Manby of Moxley decided to manufacture the new invention, and offered James employment at his new works.

1816 John decided to set up a tube works on the corner of Wellcroft Street, Church Hill, in partnership with James, who ran the business.

1823 James left the business, founding the Crown Tube Works at the High Bullen, after securing a patent for butt welded tube.

1853 After John's death, much of the manufacturing was moved to the new and larger Alma Tube Works in Walsall, but the company also continued to use the old Wellcroft Street works.

1876 Incorporated as a Limited Company. The company was registered on 6 July, to acquire the businesses of tube manufacturers of John Russell and Co and Emily Russell and Co. [6]

1916 Voluntary liquidation for the purposes of reconstruction[9]

1926 The company acquired a site of 100 acres near Runcorn, and began erecting new tube works there.[10]

'THE TRADES OF WALSALL.
SPECIAL ARTICLE No. VII. TUBE-MAKING.
Tube-making, to-day one of the giant industries of South Staffordshire, is a trade which has attained most of its importance within the last century. Until 1811 all metal tubes were expensively and laboriously welded by hand in short lengths. When, in 1802, Murdock celebrated the signing of peace with Napoleon,and at the same time demonstrated the utility of gas for illuminating purposes by lighting up the front of large Birmingham foundry, the tubes which carried the gas consisted of gunbarrels screwed together. About the year 1811, however, Cornelius Whitehouse erected his famous drawbench at James and John Russell's Church Hill Works, Wednesbury, and this invention — by enormously increasing the size limit and strength of tubes, and decreasing the cost of production — effected a revolution in the trade.

'Forty years later another great step in advance was taken, the process for lapwelding tubes being perfected. To-day the trade employs three distinct methods of manufacture. The oldest processes are those of buttwelding and lapwelding. In both the tubes are made from "skelps,” long pieces of strip iron which have been bent round until the edges almost touch. In buttwelding, the edges are joined together without any alteration from their original condition. In lapwelding the edges are bevelled prior the making of the skelp, and are then lapped over one another and welded together by the external pressure of rolls against the internal support of a mandrel which fits the inside of the tube. The third process is that of making seamless tubes by drilling billets of steel through the centre, and drawing them out to size. Lapwelded and buttwelded iron and steel tubes are used the boilers of locomotives, marine and agricultural engines, and for all purposes connected with the conveyance of oil, water, gas and steam. Weldless steel tubes are employed chiefly in the boilers, condensers, reservoirs, super-heaters and other parts of war-vessels The miscellaneous articles turned out of a tube manufactory include well-boring and casting tubes, core-bars, tramway. telegraph and electric-light poles, all sorts, shapes and sizes of coils for blast furnaces, heating, refrigerating, and distilling, with the whole of the necessary fittings.

'Of the older processes of making tubes, lapwelding is perhaps the more important, since it permits the making of large and extremely strong tubes. I have already indicated the broad lines of the process. Now for some of the details of manufacture. The iron strips which represent tubes in the first stage of manufacture are first bevelled along both edges by being placed a powerful drawbench, and palled through box fitted with cutting tools. In a long low furnace they are next heated by gas until the experienced eye of the workman in charge tells him they are ready for skelping. When that time arrives, they are pulled out one by one, and each strip drawn, with the help of an endless chain, through the skelping die. As it comes through, the edges bend round until the strip is in the form a rough tube, and then, with a crash and shower of flying sparks, it falls to the ground to await the time when it shall be welded. The welding furnace is similar to the skelping furnace. In its terrific heat the skelp lies until ready for welding. Then, at the far end, a man armed with a long bar pushes it forward. A moment later, amid a sharp blaze of white beat, it flies out and through the welding rolls —there is a sudden explosion as the water falling on the rolls evaporates - a splash of white and red sparks—and the edges of the skelp have been clinched in a grip that will probably never be loosened. The tube is next rounded by special roll and straightened in a mangle when cool. Then it is cut to the length required in the cutting machine, where a keen point of steel eats its way through the guiding mark as the tube revolves. The latter has now only to be screwed at the ends, outside or in, as desired, proved by subjection to hydraulic pressure, and it can go into stock.

'The lap welding shop was noisy enough, in all conscience, but the department in which buttwelding is carried on rings throughout with terrific, never-ending jangle and crash that drowns all spoken words. On one side the red-hot strips are flying through skelping dies, and crashing heavily to the ground in heaps. On the other a great straightening mill is rolling the tubes over and over with a roar that sounds high above the hum of the furnaces, and the multitudinous noises coming from the knots of busy sweating workers dotted across the floor-space. The tubes made here are welded a half a time. One end of the skelp is pushed into the heart of the furnace, and when properly heated this in pulled through tongs means of endless-chain draw bench. The other half having been heated, a man slips a bar through the orifice, to make certain that nothing is inside choking op the passage; and then the second half of the shelf is welded. Small tubes only for gas, steam, and water purposes are made by buttwelding. They vary in diameter between one-eighth inch and two inches.

'Seamless tubes are of modern origin. They were called into existence by the demands of naval architects, hydraulic engineers, cycle and motor-car makers, for tubes equal in strength and thickness throughout their diameter. The steel billets from which such tubes are made average about 18 inches in length and six across. They are first placed in machine and drilled. As the point the drill whizzes round its way through the heart of the billet, the soap and water which acts as lubricator rises in small clouds of steam. Yet it will take nearly hour drill the billet. After drilling, the steel is heated and rolled down to certain sizes under set of heavy rolls that send the sparks flying in showers on all sides. The nozzling machine, a great trembling press, set with iron teeth, now diminishes the size of the tube-ends, so that they can gripped in the draw-beach, where, after being cooled, the tube is drawn out through dies to whatever size required. The result is a tube of very fine finish, able to stand enormous pressure at all points, but costing considerably more than either of the welded varieties.

'To Messrs John Russell and Co, of Alma Tube Works, Pleck Road, my thanks for information are due this week.
‘KRAX’